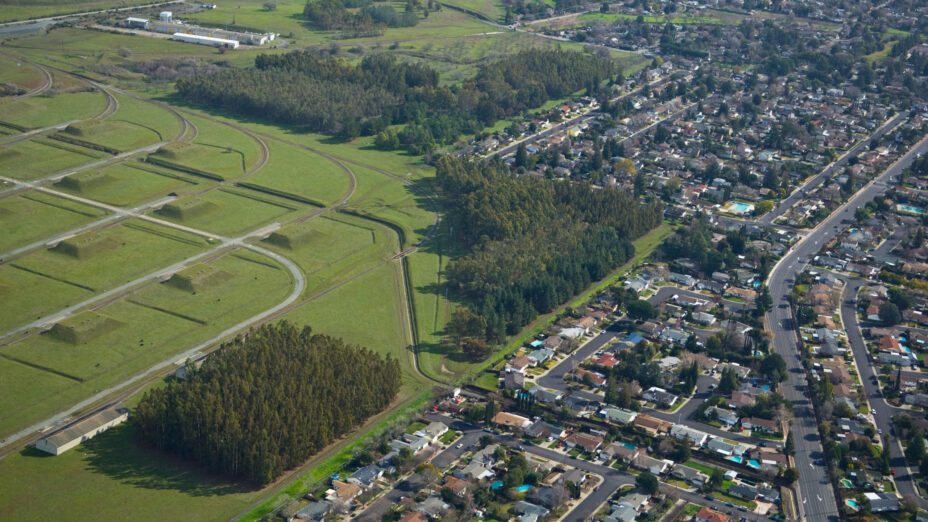 Above: Aerial view of the border between existing neighborhoods and the former Concord Naval Weapons Station. Image credit: Scott Hein.

Victory! The Concord City Council voted three to two on January 28, 2023 to drop Seeno and let the exclusive negotiating agreement with Seeno and their partners expire.

Thank you to everyone who emailed, called, or spoke to Concord City Councilmembers about dropping Seeno as the Master Developer of the former Concord Naval Weapons Station. We are extremely grateful for you!

We need to build a grassroots core of volunteers to inform Concord residents about the Concord Naval Weapons Station reuse project. Want to make positive change and guide your city? Please email Juan Pablo Galván Martínez (jpgalvan@savemountdiablo.org) and let him know you want to volunteer in Concord to change things for the better (please include your best contact information).

“On Saturday, August 21, 2021, three members of the Concord City Council threw the massive Concord Naval Weapons Station reuse project into jeopardy by choosing Seeno/Discovery Builders as Master Developer. It was a horrible decision. Based on the long and troubled history of Seeno/Discovery Builders, the extensive record shows this will be bad for Concord, and it will be bad for the environment,” said Ted Clement, Executive Director, Save Mount Diablo.

Seeno/Discovery Builders Was the Weakest Choice

A majority of the Concord City Council chose Seeno/Discovery Builders even though Seeno/Discovery Builders and their partners were rejected in the previous selection, made the weakest presentation, were clearly the weakest candidate based on city staff review of qualifications, refused to provide required financial information, have a long history of unethical and illegal business practices, and have filed lawsuits against the city, the East Bay Regional Park District, and the Navy.

More than 90 percent of all public comment received by the Concord City Council clearly asked them not to choose Seeno or their partners.

Save Mount Diablo has shared 36 newspaper articles and related legal cases about Seeno/Discovery Builders’ often unethical or illegal business practices in emails to our supporters and to Concord residents, and in social media.

They are a public record of Seeno/Discovery Builders’ activities.

For a brief overview, see our summary of the Seeno Way and our official comment letter to the Concord City Council.

What Did They Say?

You can watch the city council meeting in 2021 to see what these councilmembers thought of what the vast majority of the public had to say.

One of the city councilmembers attempted to blame Save Mount Diablo, which for 50 years has worked to protect land around Mount Diablo and which is widely recognized as moderate and pragmatic.

We also legally challenged the Pittsburg City Council’s approval of Seeno/Discovery Builders’ Faria project, which would allow grading and development on the Los Medanos ridgeline overlooking the weapons station and the new regional park.

One of the councilmembers attempted to suggest that all the controversies predated the current generation of Seenos (they don’t) and invited Albert Seeno III to agree that none off them were actually him.

We disagree. Seeno/Discovery Builders’ history is well-known. Considering the years of work, the massive scale of this project, and the potential for the public to greatly benefit or be irrevocably harmed by it, we place more importance on the business record of the companies responsible for building it and the legal history of its owners and managers. The three councilmembers have just initiated years of controversy.

The three councilmembers cited good labor policies as a reason they chose Seeno/Discovery Builders, but since all three developer candidates had project labor agreements with the Building Trades Council, this justification makes no sense.

After a three-to-two majority of the Concord City Council selected the Seeno/Discovery Builders and their partners as Master Developer in 2021, the City of Concord entered into an exclusive negotiating agreement with Seeno, Discovery Builders Inc., Lewis Group of Companies, and California Capital Investment Group.

However, on January 28, 2023, after massive public opposition to Seeno/Discovery Builders, the Concord City Council voted three to two to let the exclusive negotiating agreement expire.

What Does It All Mean?

Everyone who made their voice heard and asked for the Concord City Council to reject Seeno/Discovery Builders and their partners should be proud. You responded to our call to action, and made a clear recommendation.

We need local residents who are committed to making their region a better place and holding decision makers accountable.

We’ll need your help to continue to shape the Concord reuse project to include up to 1,000 acres of city parks and open spaces, be climate smart, be public-transit friendly, and include lots of affordable housing. We can’t do it without you! A Project Years over 15 Years in the Making

More than 15 Years of Work

More than 15 years after we began our work on the Concord Naval Weapons Station (CNWS) Area Reuse Plan, changes to this more-than-5,000-acre swath of land between Concord and Pittsburg south of Highway 4 are happening. Eventually, more than 12,000 housing units are envisioned, and 69 percent of the area has already or is planned to become protected city parks, greenways, and conservation open space. None of the large conservation gains won on this project could have happened without the extensive cooperation and collaboration efforts we have engaged in.

In 2005, the Navy approved the closure of the 5,046-acre inland area of the CNWS, a landscape comprised of rolling hills, grassland, and oak woodland dotted with bunkers and old railroad tracks. This is public land and the public should benefit from its reuse.

Even before 2005, Save Mount Diablo saw the huge opportunity that this vast area of mostly undeveloped land represented for wildlife habitat protection, outdoor recreational experiences, and other public benefits. We also recognized that others saw great opportunities of a different sort and that by working together, we all had a better chance of accomplishing our own separate goals and winning much more than would be possible if everyone went it alone.

In 2007, we joined with Concord residents around CNWS, labor unions, interfaith groups, affordable housing advocates, and other environmental organizations to form the Community Coalition for a Sustainable Concord (CCSC). Over the next five years, as Concord prepared the Area Reuse Plan, which would be the blueprint for future use of the CNWS, the CCSC worked to make its vision of a vibrant mix of jobs and affordable homes in walkable neighborhoods surrounded by protected open space become reality.

As a result, when the city adopted the Area Reuse Plan in 2012, more than 3,500 acres of land were designated as parks, greenways, and open space. Much of this would eventually become a new regional park owned and managed by East Bay Regional Park District (EBRPD). Affordable housing guidelines were also set, greenway buffers between existing residents and new development would be created, good jobs would be secured, and transit-oriented mixed-use development would be built to capitalize on the North Concord BART Station and keep as many cars off the road as possible.

Lennar was chosen for Master Developer for the former Concord Naval Weapons Station.

In July, the board of directors for the East Bay Regional Park District unanimously approved the final land use plan for the new regional park, which is three times the size of Angel Island and bigger than Tilden, with 27 miles of new trails. This approval is the necessary step before the first phase of the park can be opened, the area south of Bailey Road.

In August, Albert Seeno III and Discovery Builders filed a lawsuit against the East Bay Regional Park District, delaying the opening of the new regional park.

In February, the Pittsburg City Council unanimously approved the nearby Faria project, which would allow Seeno Discovery Builders to build on top of the ridgeline overlooking the regional park. We filed a lawsuit challenging Pittsburg’s approval, hoping to push development away from the ridgeline to protect the park.

On January 28, 2023, three of five Concord city councilmembers voted to let the city’s exclusive negotiating agreement with Seeno/Discovery Builders and their partners expire. That vote means Seeno and their partners are no longer the Master Developer of the Concord reuse project.

Our hope is that we will be successful in the future by doing what has worked so well for us in the past: collaborating with different stakeholders to accomplish goals that benefit the entire community. Reuse Area Land Use Plan. Note that this image is intended to a general concept for full build-out of the entire reuse area over the next 30 to 40 years, does not reflect current or pending specific project approvals, and does not show the full extent of the new regional park. The specific plan will have more recent maps when it is released. Image credit: Hart Howerton (consultant to the former Master Developer).