We’ve supported grazing in some places including on many of our properties, and supported limiting it in others.

Without a doubt, grazing impacts resources and affects recreational uses, but it also helps with resource management—some endangered species require grazing and associated stock ponds, for example. Plus, grazing provides cost-effective fire management in urban areas where other means (such as controlled burns) are impossible or more difficult. Impacts can be lessened with careful management; for example, we often fence creek areas and encourage seasonal rather than year-round grazing.

Ultimately the most overgrazed parcel is better for resources than development, and we try to maintain good relationships with ranchers from whom we buy most of our land.

Our top priority is to preserve land and wildlife corridors between parks. Secondly, we restore and enhance habitat through creek restoration, tree planting, etc. The larger an area we can preserve the more wildlife benefits.

We sometimes reintroduce rare species, as we did with the endangered peregrine falcon. We avoid trail building in some areas and remove redundant fire roads in others. We fence creek and springs. We leave dead trees in place, which benefits many species.

In development projects, we work to decrease impacts on wildlife and to require wildlife benefits such as road undercrossings, new ponds, and native revegetation.

One of the most significant things we do is to get involved in policies affecting management of parks to benefit wildlife. When a piece of ranchland becomes parkland, for example, the primary purpose of grazing shifts to resource management. Habitat is enhanced.

Despite all the development and habitat loss that has taken place in the past 50 years, Diablo’s parks have more robust wildlife populations now than they did then—primarily because of management changes.

The organization was co-founded in 1971 by Art Bonwell and Mary Bowerman. Since 1971, Save Mount Diablo has been instrumental in increasing preserved natural lands on and around the mountain from 6,788 acres to more than 120,000 acres.

The organization engages primarily in the following activities:

Our mission is to forever preserve the remaining natural lands on and around Mount Diablo, and to connect Mount Diablo to the rest of the Diablo Range.

We achieve our mission through a conservation approach that integrates perpetual land preservation, advocacy, stewardship, land use planning, and education programs. We work to preserve Mount Diablo’s peaks, surrounding foothills, and watersheds through land acquisition and preservation strategies designed to protect the mountain’s natural beauty, biological diversity, and historical and agricultural heritage; enhance our area’s quality of life; and provide recreational opportunities consistent with the protection of natural resources.

Mount Diablo is not a volcano, but it sure looks like one. If it’s not volcanic, how was the mountain formed? Geologists are still trying to unravel the complicated history of the mountain—its rocks are old, but the mountain itself is very young.

The oldest rocks are located in the central and highest peaks. As you proceed downslope, away from the summit, the rocks are younger.

The older core rocks were formed far at sea at a spreading ocean rift zone, as much as 165 million years ago. As a part of moving tectonic plates, they were brought to the North American continent and into a subduction zone.

Part of this ocean crust and overlying sediments were scraped off the subducting plate and forced under some sedimentary material already here. This area was later uplifted, pushing up the coastal range.

Meanwhile, before that happened, much of California was an inland sea, rising and falling from one ice age to the next, and into which rivers deposited the sediments. Ultimately these sedimentary layers were compressed into solid rock, typically sandstone and shale. About four million years ago, the Diablo region was low rolling hills.

About two million years ago, the same pressures that break the earth along the San Andreas fault began to form a large-scale compressional fold. The raised sedimentary layers were eroded away and tilted up, and now they wrap around the harder, older mountain core.

The tilted sedimentary layers now stand almost vertically in places such as Rock City, Castle Rock, Fossil Ridge, and Devil’s Slide. Erosion has removed thousands of feet of what was overlying material, exposing the core as we know Mount Diablo, and carving fascinating features like wind caves and tunnels.

What’s in a name? Like many other isolated peaks, Mount Diablo is steeped in lore—much of it involving the mountain’s name.

The reference to “Diablo” or devil can be traced back to 1805, when Spanish military troops searched for Native Americans who had run away from a mission. At a willow thicket near present-day Buchanan Field in Concord, the soldiers encountered a camp of Chupcan people and surrounded it. During that night, the Native Americans escaped unseen and unheard.

Angry and confused, the Spanish called the site “Monte del Diablo,” or “thicket of the devil.” Later, English-speaking newcomers mistakenly assumed the word “monte” meant “mountain” and applied the title to the prominent nearby peak. A linguistic accident thus gave California its Devil Mountain.

Although it’s commonly believed that Mount Diablo State Park covers all of Mount Diablo, in fact more than 60,000 acres of the mountain and its surrounding foothills and adjacent grasslands are privately owned. Privately owned land is potentially subject to development.

To preserve this land as public open space, Save Mount Diablo works with landowners to acquire private land and then either owns and manages it, transfers the land to a public entity such as Mount Diablo State Park or the East Bay Regional Park District, or sells the land with a conservation easement on it to a private landowner.

Save Mount Diablo is a San Francisco Bay Area tax-exempt nonprofit 501(c)3 organization. Our tax ID is 94-2681735. We are hikers, bikers, equestrians, bird watchers, and people who just love to look at the mountain.

Save Mount Diablo is frequently asked whether we endorse recreational uses such as mountain biking, horseback riding, etc. given that they may damage trails or resources.

We support appropriate restrictions to protect sensitive resources such as avoidance or fencing of especially sensitive areas, careful trail design, and seasonal trail or area closures (to protect nesting eagles and falcons, for example). We also support restoration of overused areas and facilities.

Most importantly, we support expanded land preservation to balance increased population and use.

A BioBlitz is a 24-hour inventory of all living organisms in a given area. The first Save Mount Diablo BioBlitz was held 2007 on Irish Canyon. BioBlitz events are used to bring the public and the scientific community together to establish baseline data about the biodiversity of an area. It’s a great opportunity for the public to explore new areas and be involved in real science data collection. The data collected by citizen scientists is used to study how species composition in a certain area change over time.
SMD’s 2022 BioBlitz is tentatively planned for April 16 to 30. The 2022 BioBlitz will focus on the 2020 SCU Lightning Complex fire footprint, which is 393,624 acres. We are encouraging participants to visit sites that are open to the public.
Due to COVID-19, there is no specific place that we will be gathering. Instead, we are encouraging participants to visit sites with public access safely, during their own time and following county and state COVID-19 guidelines. Please check out the Burn Areas section for suggestions on places to visit.
Joining is fun and easy! All you have to do is download iNaturalist onto your device, make a free account, head out to the site, and start making observations.
Anyone! This year, our BioBlitz is completely open to the public. Learn how to get started by watching the video below:

If possible, provide multiple photos of the object from different perspective. For example, a good tree observation can include a photo of the leaves, the bark, and the flowers.

Based on your observations, iNaturalist will propose its identification, often listing several for you to pick from. Unless you know otherwise, select or enter the most general option that is predicted for this area. There are experts on iNaturalist that can confirm your identification.If you come across a plant that you suspect was likely planted by another person, check the Captive/Cultivated box.

iNaturalist has some great videos on how to take better photos for identification: https://vimeo.com/167341998

Please feel free to contact Denise Castro, Education & Outreach Associate, at dcastro@savemountdiablo.org.
Our regularly scheduled workdays are free and open to the public. We do offer a corporate or group workday for a fee. The fee covers portable restrooms on-site, popup tent, snacks, water, and Save Mount Diablo stewardship staff time. Workdays can usually be scheduled Tuesdays through Fridays.
We do not, but we are happy to sign an online community service form or a hard copy brought to the workday.
Volunteers under the age of 18 must be accompanied by their parent, guardian, or adult chaperone to participate. Most of our activities are appropriate for middle-aged kids and older. Younger kids are also OK if they can follow directions and are accompanied by their parent or an adult chaperone.
Yes! Volunteers under 18 years old need a parent or adult guardian to complete and sign the stewardship liability waiver form and an adult chaperone will also need to be present during the workday. See also our policy on volunteers under the age of 18.
We cancel workdays in response to extreme weather conditions, including but not limited to high winds, heat, heavy rain, Spare the Air days, and fire danger.
We recommend loose-fitting pants. (Spandex or workout pants are not great because thorns may snag on them and seeds might stick to them.) We also recommend a long-sleeved shirt or overshirt, hat, sunglasses, sunscreen, and sturdy shoes (tennis shoes, hiking shoes, or boots). We don’t recommend cloth running shoes because they may catch seeds and are hard to clean.
Visit our DiRT Eventbrite page to view and sign up for upcoming events.
Typical activities, depending on the time of year and site, can include watering, weeding, trail delineation, mulching, tree tubing, or creek cleanup. Sometimes we also plant native plant seeds or starts.
No, please ask each participant to sign up and complete our liability waiver.
You can reach Denise Castro, Outreach & Education Associate, at dcastro@savemountdiablo.org.
We will cancel the hike if there is heavy wind or rain, extreme heat, fire, or any red flag warnings.
We recommend long pants, sunscreen, and a hat. Dress in layers. Running shoes are OK. For strenuous hikes, we suggest sturdy hiking boots.
Bring a bottle of water, snacks, and sunscreen. A hat is highly recommended. For hikes that are in a park with an entrance fee, bring exact change or a check (sometimes the park entrance does not have an attendant, or the attendant does not have change).
The hikes are free. Some hikes are in a park with an entrance fee, which you can pay with cash or check. If you pay cash, you may need exact change.
Yes. If you would like to change anything, please contact Denise Castro at dcastro@savemountdiablo.org.
No. On the hike day, we will have a roster with your registration information on it. Please make sure to check in with the hike leader.
Anyone under the age of 18 will need to be accompanied by a parent or guardian.
No. Some Discover Diablo hikes take place on land owned by other organizations (such as Mount Diablo State Park and East Bay Regional Park District lands), and many of the trails on these properties have a strict no-dog policy.
Each Discover Diablo event opens up for registration exactly two months before the day of the event at 10 AM. All events are first come, first serve.
Yes, electric bikes are allowed at this event.
Yes, you will need to bring your own mountain bike and helmet. 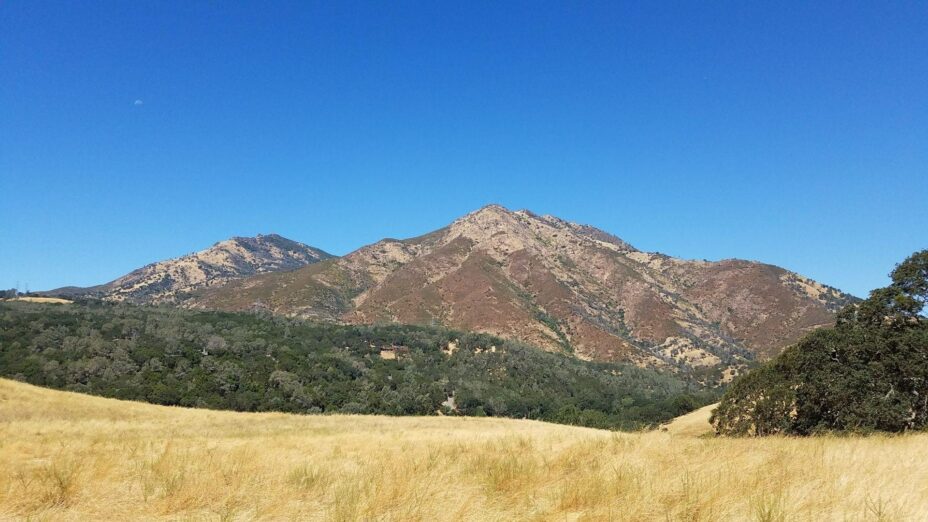