Connecting Mount Diablo to the Whole of the Diablo Range

The Diablo Range is a mountain range and biodiversity refuge that’s next door to millions of people, but that most people know nothing about. It stretches over more than 200 miles long.

Seventy-five percent of the ecologically important area around Mount Diablo has been preserved, but in the full Diablo Range, only 24 percent of the landscape has any protection. To inform people about the incredible Diablo Range, Save Mount Diablo helped to sponsor a cover story and supplement in Bay Nature magazine, with the Santa Clara Valley Open Space Authority. “The Spine of California,” by Bay Nature Digital Editor Eric Simons, explores the most rugged, plant-rich stretch of California you’ve never heard of. 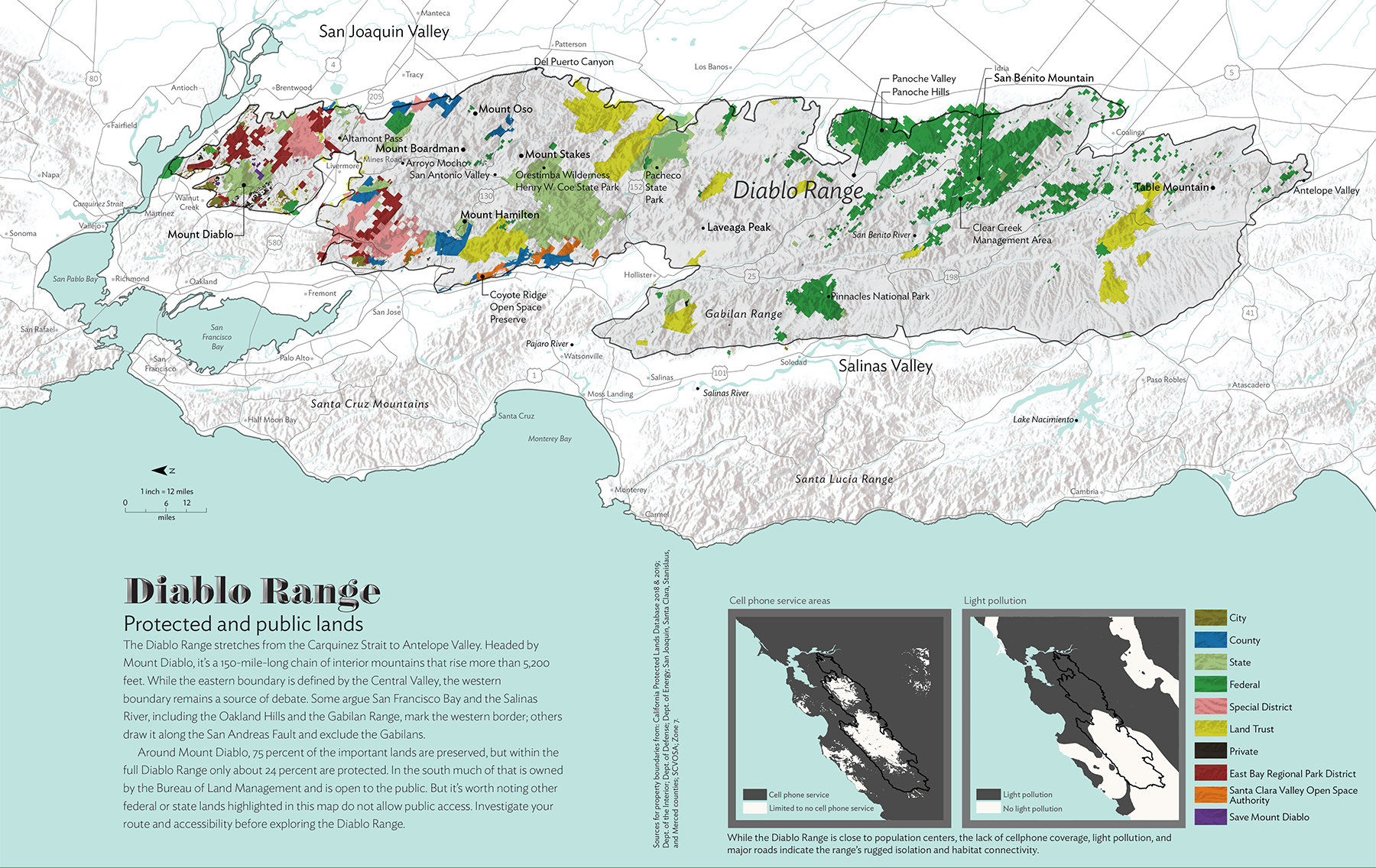 Save Mount Diablo now does its land use advocacy work in seven counties of 12 crossed by the Diablo Range. The organization’s primary land acquisition focus remains north of Highway 580 and around the main peaks of Mount Diablo.

Save Mount Diablo is working on land use campaigns across the northern and central Diablo Range: 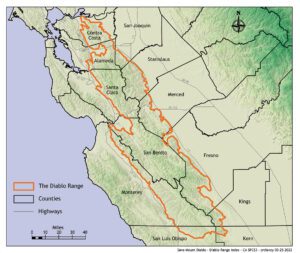 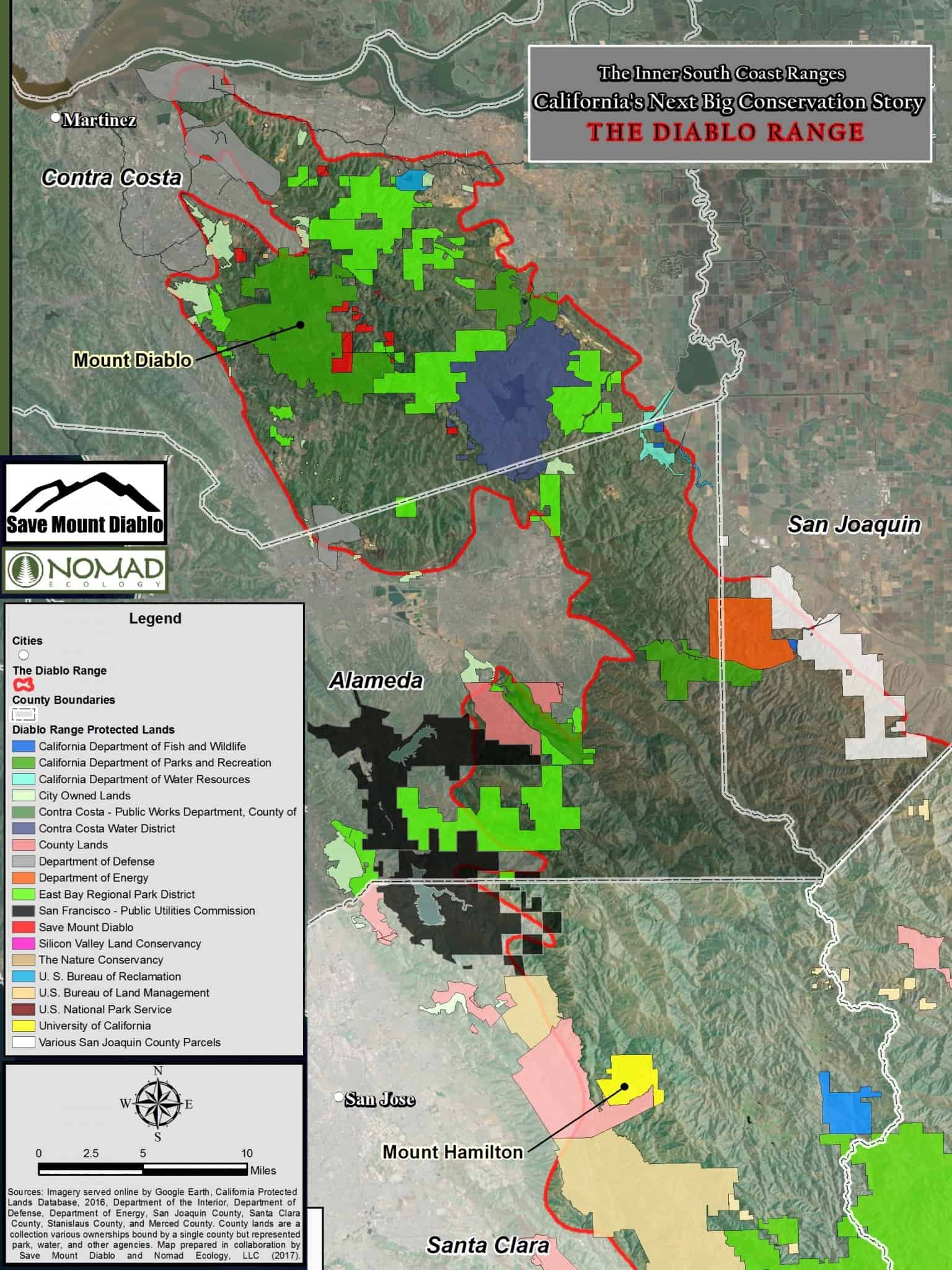 This area includes an essential, 10-mile-wide wildlife corridor (Altamont Pass is part of it) that connects Mount Diablo to the rest of the Diablo Range. It also includes one of the most important and vulnerable biodiversity hotspots in California.

According to Simons, “The . . . range of mountains from the Carquinez Strait to the oil fields of the southern San Joaquin Valley holds some of the largest remaining wild places in California. It is a rugged, remote, difficult realm, a biodiversity ark incised by the San Andreas Fault. It is a historic mixing place, where Central Valley Yokuts and coastal Ohlones traded and danced, where California’s ever-more-diverse future residents will seek escape and recreation. And it is nearly unparalleled in ecological significance.”

The Diablo Range stretches from the Carquinez Strait all the way to the Antelope Valley in Kern County and contains some of the largest remaining unprotected wild places in California. The mountain range is huge, rugged, and remote. Bounded by Highway 101 to the west and Highway 5 to the east, the more-than-200-mile-long, 40- to 50-mile wide area is a blank spot on the map for the public focused on its outer grassland foothills. The Diablo Range covers 5,400 square miles and has many peaks, some of which are taller than Mount Diablo. The tallest one is San Benito Mountain at 5,241 feet. Mount Diablo measures at 3,849 feet.

The range is extremely important for wildlife, crossed only by two major highways at Altamont and Pacheco Passes. It serves as a reservoir of biodiversity, a core habitat for wildlife in California.

Although golden eagle populations are declining in western North America, they’re stable in California because of the Diablo Range.

The northern Diablo Range supports the highest density of golden eagles on the planet. The Diablo Range could also be the source for replenishing the genetic diversity of mountain lion populations in the Santa Cruz Mountains. Tule elk, nearly hunted to extinction in the 1970s, have recovered quickly in the Diablo Range. Bay checkerspot butterflies have their last stronghold along Coyote Ridge just above San Jose. And the Diablo Range offers great habitat for California condors to expand into as they recover from the brink of extinction.

The Diablo Range is threatened by energy development (both alternative and fossil fuel-based energy), suburban sprawl, and proposed dams and reservoirs. Wind turbines endanger golden eagles and other birds. And the Panoche Valley, part of the Diablo Range, now has a 4,800-acre solar farm.

This mountain range harbors incredible biodiversity that supports many rare, endemic (plants or animals found nowhere else), or disjunct species (plants that are cut off from other populations and not expected to be there).

It contains large swaths of land with serpentine soils, on which rare plant species that live nowhere else grow. And some of the soils are “vertic clays,” which also support rare and endemic plant species. Although the Diablo Range is right next to some large cities, large areas of it have limited to no cell phone coverage, light pollution, or major roads, an indication of its habitat connectivity.

Read more about the Diablo Range and Save Mount Diablo’s work to protect it in the Bay Nature cover story.