Marsh Creek 5 is a steep 7.4-acre site along Marsh Creek Road that includes an undercrossing for wildlife movement and a 100-foot segment of Marsh Creek. 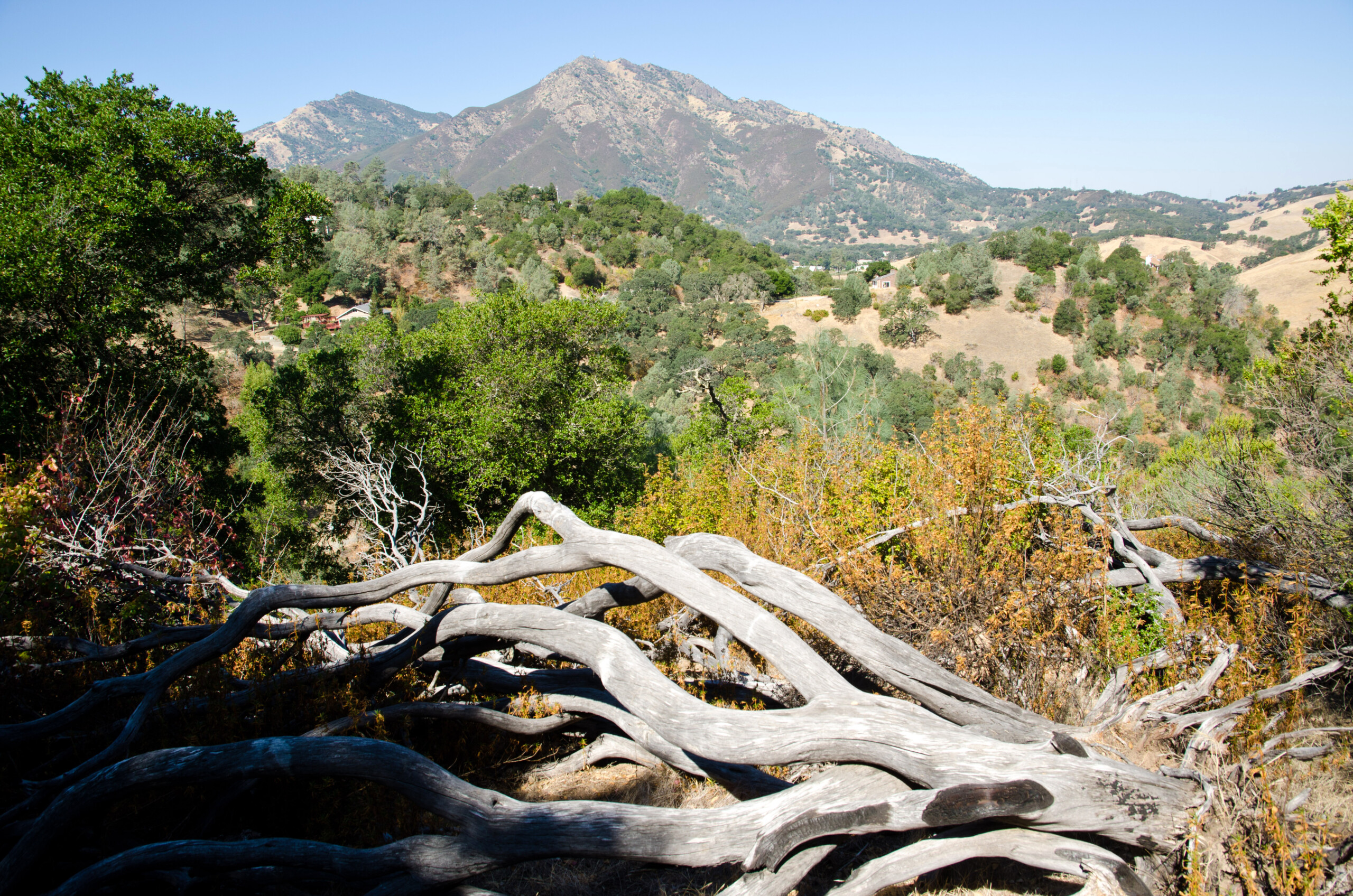 The property is located just downstream from our Marsh Creek 2 and 4 properties. One of a series of unusually steep knolls near the northeast corner of Mount Diablo State Park, it is one property away from two other Save Mount Diablo parcels and also rises to another large property protected with a scenic easement.

Even for a creek property, Marsh Creek 5 is especially rich in biodiversity, in part because of its unusual geology.

The property’s corner is crossed by Marsh Creek at the mouth of the Dark Canyon segment of Marsh Creek Road. More importantly, it is adjacent to a large box culvert where the creek crosses underneath the road, a very important wildlife connection.

Marsh Creek is an important wildlife corridor and habitat for many species in the area east of Mount Diablo. The property’s section of the creek is lined with mature sycamores (Platanus racemosa), oaks (Quercus sp.), and willows (Salix sp.). It is habitat for the threatened California red-legged frog (Rana draytonii), but is also used by a wide array of wildlife. 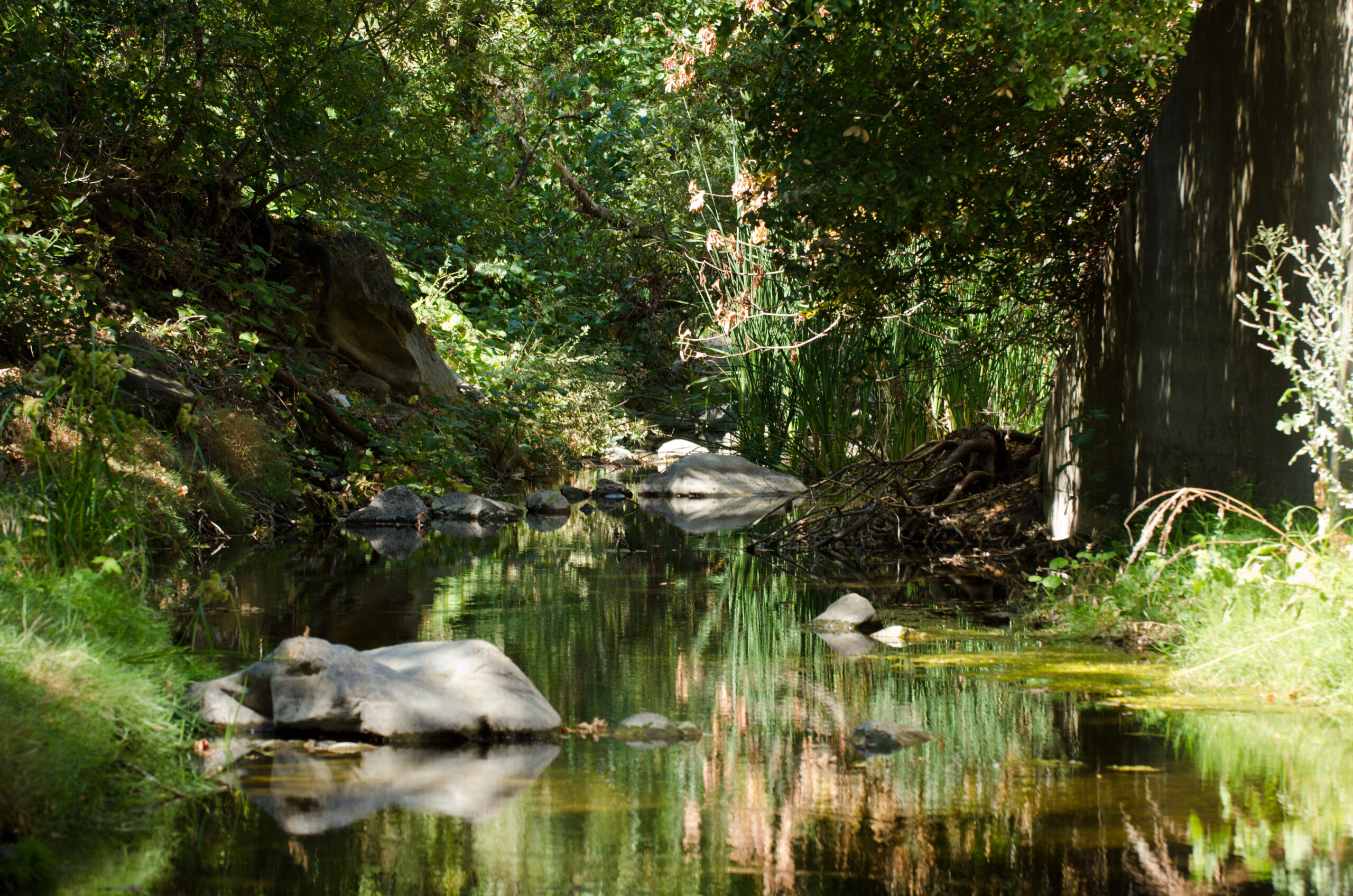 All told, in the upper and middle stretches of Marsh Creek (the area upstream of Marsh Creek reservoir in Brentwood), Save Mount Diablo has protected more than a mile of the creek in small parcels.

Another 8.5 miles of the creek have been protected within five parks from its headwaters in Morgan Territory Regional Preserve down to the Marsh Creek State Historic Park, and still more segments in Brentwood and Oakley.

After Save Mount Diablo purchased the land, staff and Land Committee members visited Marsh Creek 5. The northern exposure along the road is steep and lush, and includes a lot of poison oak (Toxicodendron diversilobum), but several rare plants can be located in just a few minutes on the site.

There are large rock outcroppings and slopes of smaller rocks, many of them pink, layered, with shiny light and dark crystals, which indicates a form of rhyolite or dacite, igneous (from magma or lava, sub-surface (plutonic) or above ground (volcanic) rock with a high silica content.

After visiting the property, staff started looking at geology maps. There’s not as much igneous rock in Contra Costa as in the North Bay, but it’s not all that unusual, especially on Mount Diablo.

The most common igneous rocks on Mount Diablo are old ocean crust formed as much as 165 million years ago deep out at sea. These rocks included parts of Diablo’s main peaks. Also present are pillow basalts formed at underwater eruptions along a mid-ocean ridge. These pieces of igneous rock were carried to North America and added to the continent by the movement of tectonic plates.

In the Oakland Hills, more recent volcanoes erupted and spread lava and ash locally around 10 million years ago. And in various places around the Contra Costa County, ash from eruptions further away are consolidated as “tuff” beds.

The 4.83 million-year-old pink Lawlor Tuff is an age marker around Diablo, laid down on a flat to rolling landscape before the peaks were exposed, and steeply folded as Mount Diablo emerged. 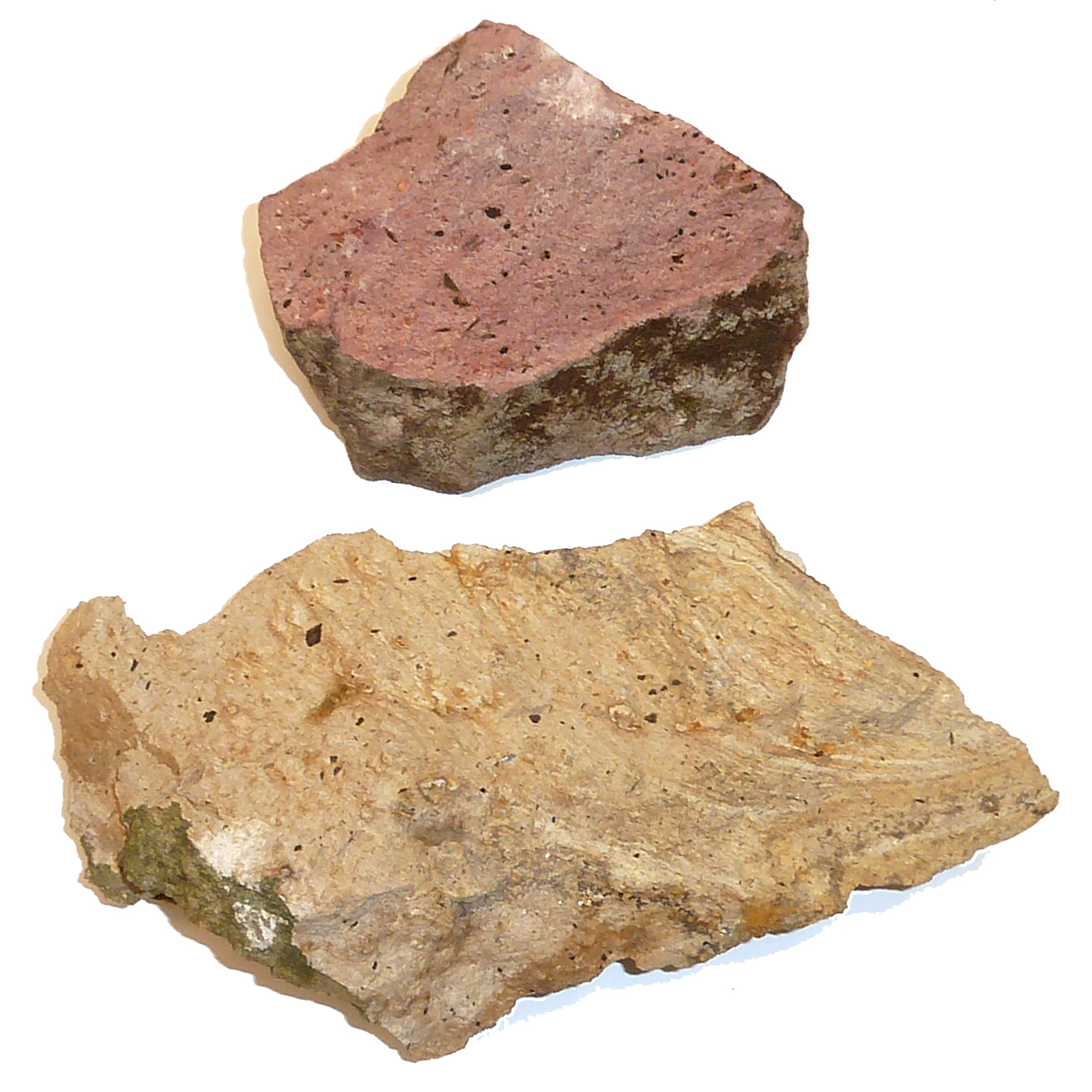 At the northeast corner of Mount Diablo State Park, near the intersection of Marsh Creek and Morgan Territory Roads, 18 spots have been mapped so far, by other geologists. These spots are of high silica igneous rock visible in mound or dome like surface exposures, within a four-mile northwest-southeast band, a mile and a half wide.

The age and location of the domes is interesting considering how Marsh Creek doubles back on itself and heads east, threaded among them. As Mount Diablo emerged through overlying sedimentary layers over the past 3 to 4 million years, it forced drainages east and north, and the creeks helped erode some of the domes.

These domes are Tertiary (65 million to 2.6 million years old) felsic (magma or igneous rock with at least 65 percent silica) porphyric deposits (formed when a body of rising magma cools in two stages).

Previous mapping has identified similar dome-shaped features as volcanic domes. Alternatively, it is possible that these features represent eroded volcanic necks, but the lack of field evidence makes this idea difficult to test. The felsic dome features are surrounded by older Early Cretaceous shale and sandstone (146 to 100 million years old).

In other words, the domes are magma extrusions which might or might not have reached the surface. They are what’s known as a plug dome (if the magma erupted, flowed above ground, and then solidified), or a plug neck (if the magma solidified underground and then was exposed by erosion). Most likely the outcrops are volcanic domes, formed at least partially above ground.

Mayfield visited Marsh Creek 5 and confirmed that the rock there is rhyolite or dacite (or rhyodacite, an intermediate form of rock between rhyolite and dacite).  Quartz and feldspar phenocrysts are present in most samples.

In addition, many contain biotite and hornblende as a dark colored, ferromagnesian mineral.  In some samples biotite is most abundant, whereas, in other samples rocks with the opposite properties are found.

All or part of 11 of the 18 spots are on protected land—at Chaparral Spring, and Clayton Ranch for example—but most of them are not yet accessible to the public.  Once you’ve focused on their characteristic shape—unusually steep knolls—they’re easier to pick out, several of them along Marsh Creek Road, Morgan Territory Road, and Leon Way.

Marsh Creek 5 happens to be very steep and thick with poison oak.  Nearby however, one dome is easily accessible at the bottom of Perkins Canyon, west of Morgan Territory Road and just south of the mercury mine, within Mount Diablo State Park. 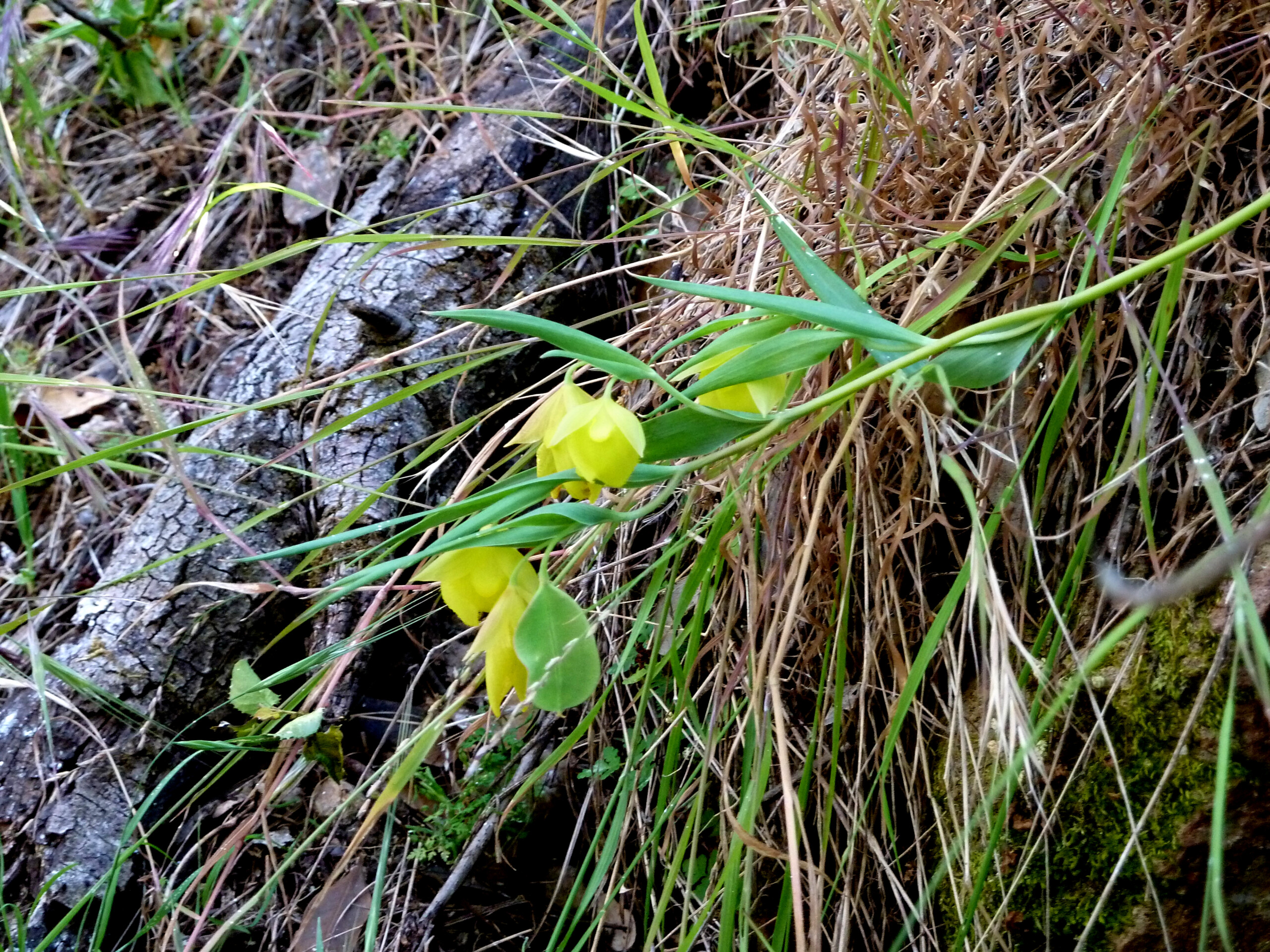 As rocks break down, soils are formed, and when the geology is complex, so are the soils.

Because they’re high in some minerals, chemicals, and trace elements, and deficient in others, rocky soils exclude some plants and are speciation sites where others evolve into new forms. Vegetation on Marsh Creek 5 is diverse due to its conical topography, which exposes the parcel to a variety of aspects.

The north slope is draped in a shroud of full shade, as is much of Dark Canyon to the east. The upper canopy includes California bay laurel (Umbellularia californica), interior live oak (Quercus wislizenii), and coast live oak (Quercus agrifolia).

The mid-story canopy smells sweet of western hop tree (Ptelea crenulata) blossoms. But is also armed with an abundance of poison oak (Toxicodendron diversilobum) and its ever present urisol for those who dare to tread—if the property’s 45 + degree slopes aren’t enough to discourage you.

On the exposed western slope, the dense canopy cover gives way, and herbaceous species bask in the sunlight. These include monkeyflower (Mimulus sp.) and some of our wonderful native grasses including blue wild rye (Elymus glaucus), California fescue (Festuca californica), and smallflower melicgrass (Melica imperfecta).

On the eastern side of the dome, slopes are gentler in character. These gentler slopes allow blue oaks (Quercus douglasii) to replace live oaks and begin creating the savanna we are accustomed to on this side of the mountain, accented with scattered buckeyes (Aesculus californica).

At the top of the dome, there’s more sun and more exposed rock. Plants with an affinity for this lithic substrate include foothill pine (Pinus sabiniana), where turkey vultures (Cathartes aura) are fond of roosting. 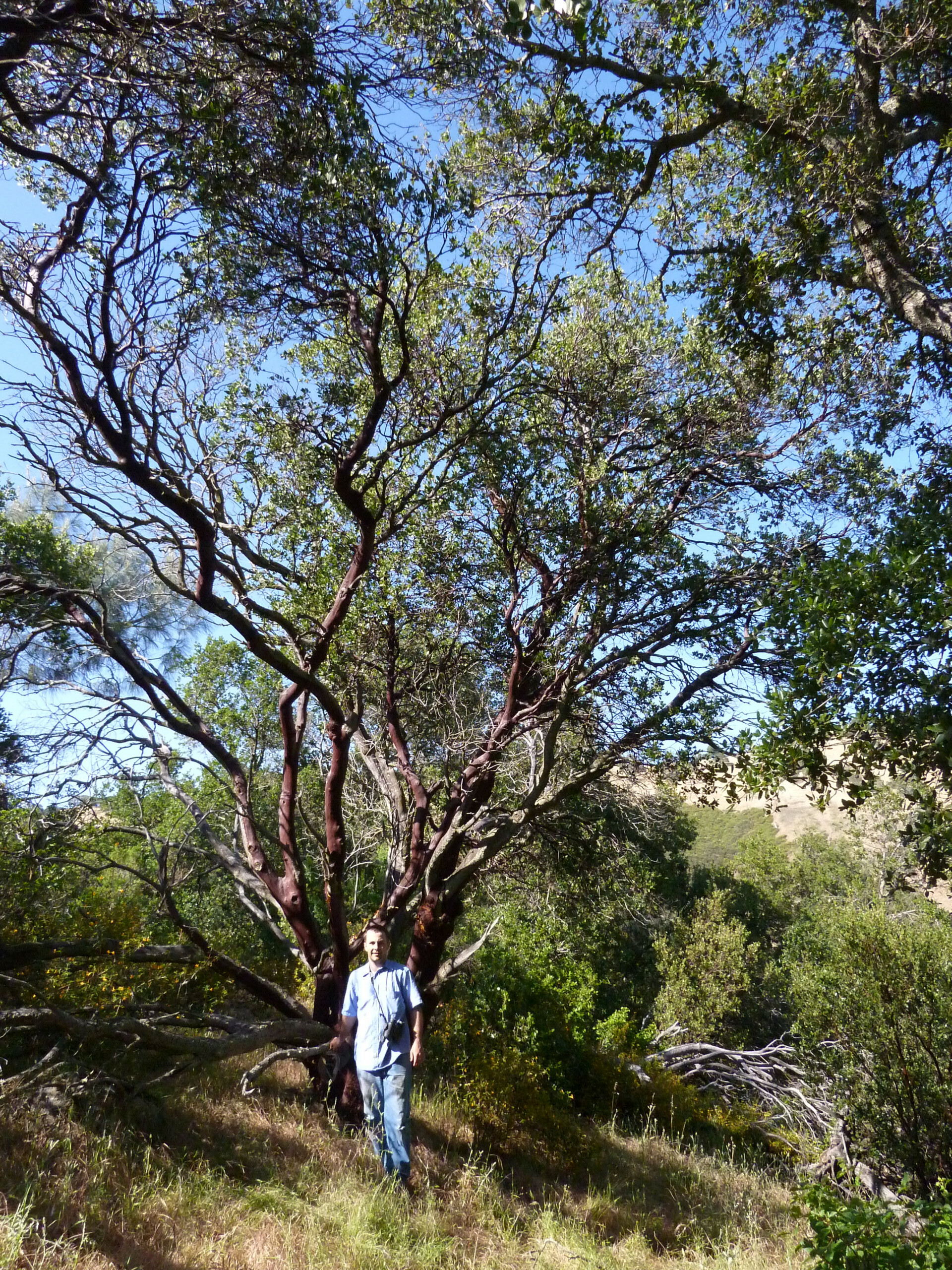 The most interesting plant species seen at this property are a group of manzanitas at the summit. They may be among the tallest anywhere, at 25 to 30 feet in size. Though manzanitas can be a difficult genus of shrubs to identify, because they hybridize easily, there are only a few possible species these large specimens could be, based on the leaf shape and lack of a basal burl.

In this region, a manzanita with these characters could be identified as big berry manzanita (Manzanita glauca) or Contra Costa manzanita (Arctostaphylos manzanita spp. laevigata), which is also a CNPS- and HCP-listed or -covered species.

Differentiating these two species is further aided by their flowers and fruits. Yet there is still another possibility, though not one currently recognized by manzanita experts.

James Roof, an early Director of the Tilden Botanic Garden, wrote about a new manzanita from Contra Costa County. He published it in The Four Seasons (Volume 5, Number 4, 1978) as Bowerman manzanita (Arctostaphylos bowermaniae), named after Dr. Mary Bowerman, Save Mount Diablo’s Co-founder.

He described this species as being endemic to Contra Costa County and occupying ridge tops or north-facing slopes between 400 to 800 feet in elevation. 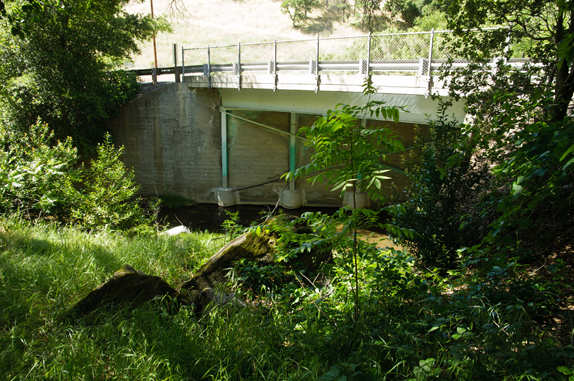 It was in grassland or thinly distributed oaks and buckeyes, confined in the then-recognized Black Diamond Mines Regional Preserve. (Park District lands were more than three miles from Marsh Creek 5 in 1978. Around Black Diamond, District lands have tripled in acreage and are now less than a mile away.)

This hybrid manzanita expresses itself through Contra Costa manzanita leaf characters, though variably large and small on a single individual, and primarily the solid stone fruit of big berry manzanita. However, current manzanita taxonomists believe that A. bowermaniae is a relict ancestor that evolved into the more common Contra Costa manzanita we know today.

We explored several more domes, and found the same manzanita at one nearby, but not at the dome in lower Perkins Canyon. 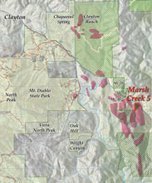 Take a self-guided hike to a more accessible volcanic plug near Perkins Creek.