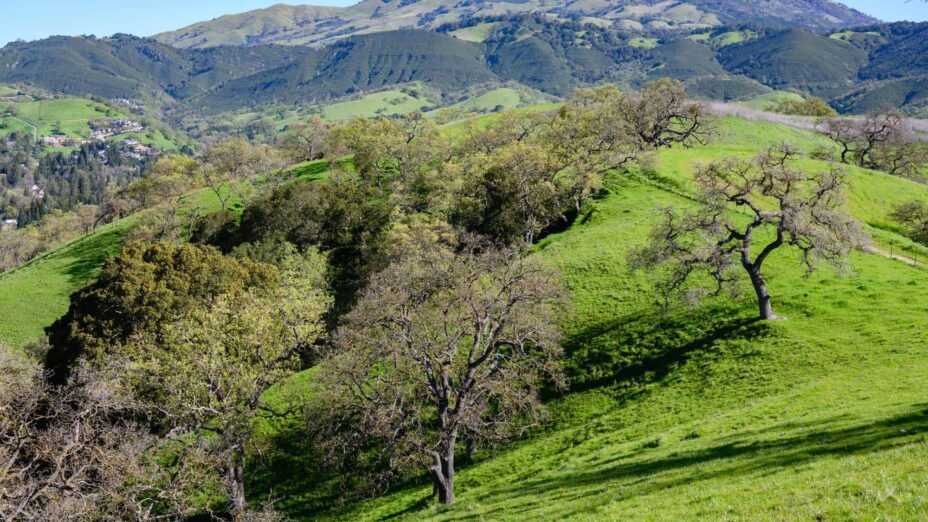 Measure Y was on the March 3, 2020 ballot in Danville, CA. Save Mount Diablo enthusiastically supported YES on Y because the measure creates Magee Preserve, the most important missing piece of Danville’s open space.

Measure Y made it possible for 93 percent this privately owned land to be available to the public for the first time, including miles of new trails for hikers, cyclists, and equestrians.

The views to Mount Diablo and Las Trampas are spectacular.

What Is Magee Preserve?

A project proposed by the Danville Magee ranching family and Summerhill Homes was approved in 2013. It was challenged in court, delayed, and picked up by Davidon Homes.

Today, Magee Preserve is a development project located within the city limits of Danville, south of Diablo Road and the community of Diablo. It restricts 93 percent of the property permanently as public open space, with 343 acres to be owned and managed by the East Bay Regional Park District. The Magee Ranching family began ranching in Danville in 1949. This proposal will allow them to continue cattle grazing on the 381 acres of protected land. Public hearings took place in 2019, and the Danville Town Council unanimously voted in support of the project. Measure Y, in support of creating Magee Preserve, passed in the March 2020 Danville election.

Magee Preserve prioritizes the preservation of the foothills of Mount Diablo and Danville’s unique way of life for future and current generations.

Save Mount Diablo supports the trade-off because of the project’s outstanding conservation values; it restricts 93 percent of the property—or 381 of 410 acres—from development, at no cost to taxpayers. That’s why it’s called “Magee Preserve.”

Here’s How the Open Space Will Be Permanently Protected: 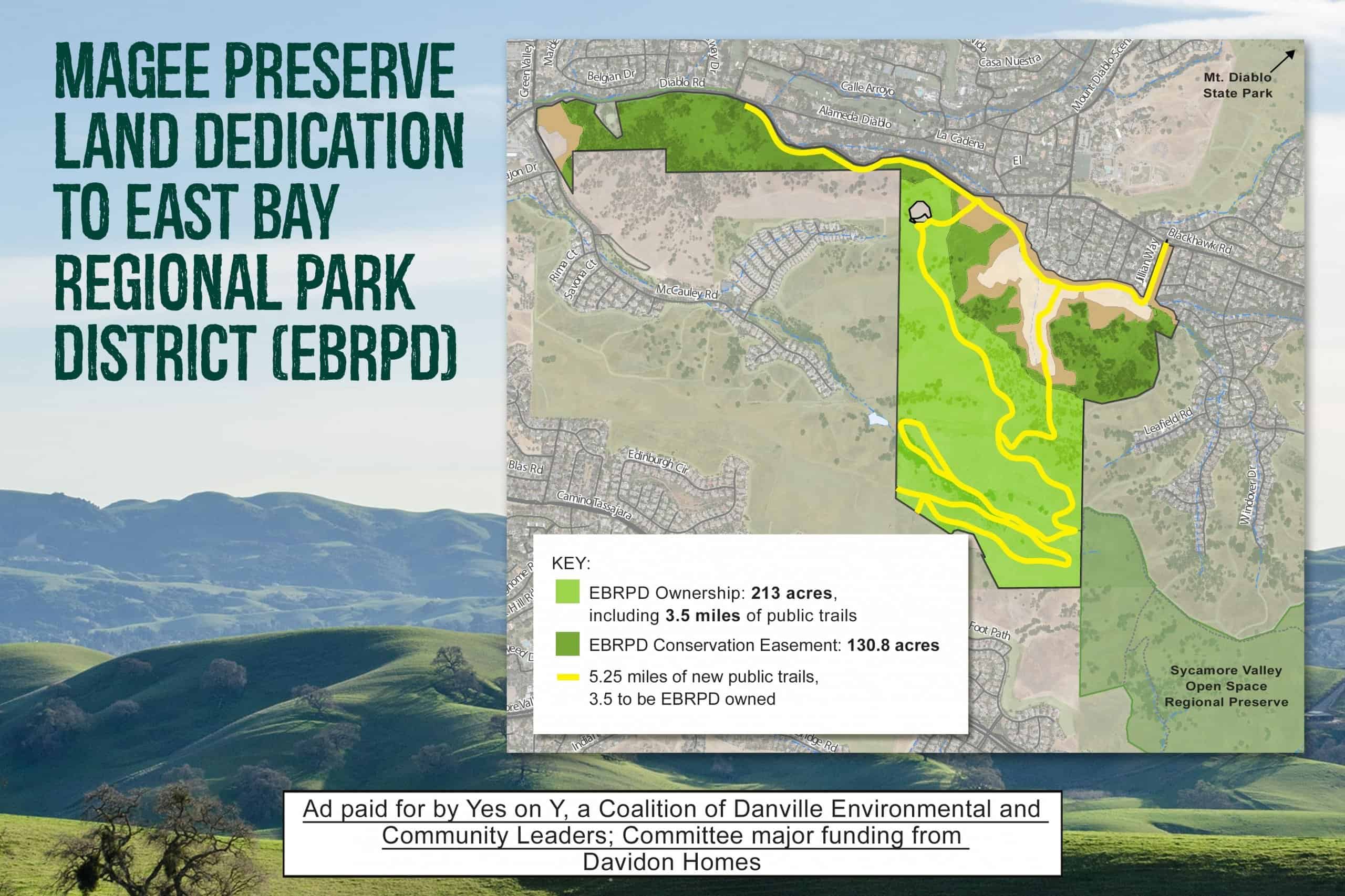 These new trails will fill an important gap in the regional trail network by connecting Mount Diablo State Park to Sycamore Valley Regional Park and the Iron Horse Trail.

The East Bay Regional Park District (EBRPD) has agreed to accept 213 acres of land that EBRPD would own and manage, plus 130 acres that EBRPD would hold a restrictive covenant over that would permanently prohibit any potential future development. The 130 acres would also be owned by a Geologic Hazards Abatement District.

The 213 acres of EBRPD-owned land would expand the Sycamore Valley Open Space Regional Preserve. An additional 38 acres would be protected as public open space owned by a homeowner association.

Measure Y Is a Huge Win for Danville

It creates a massive environmental benefit for hikers, cyclists, equestrians, and walkers and their dogs across our community.

It is the best environmental trade-off that Save Mount Diablo has ever seen: 13 acres of land protected for every one acre developed. 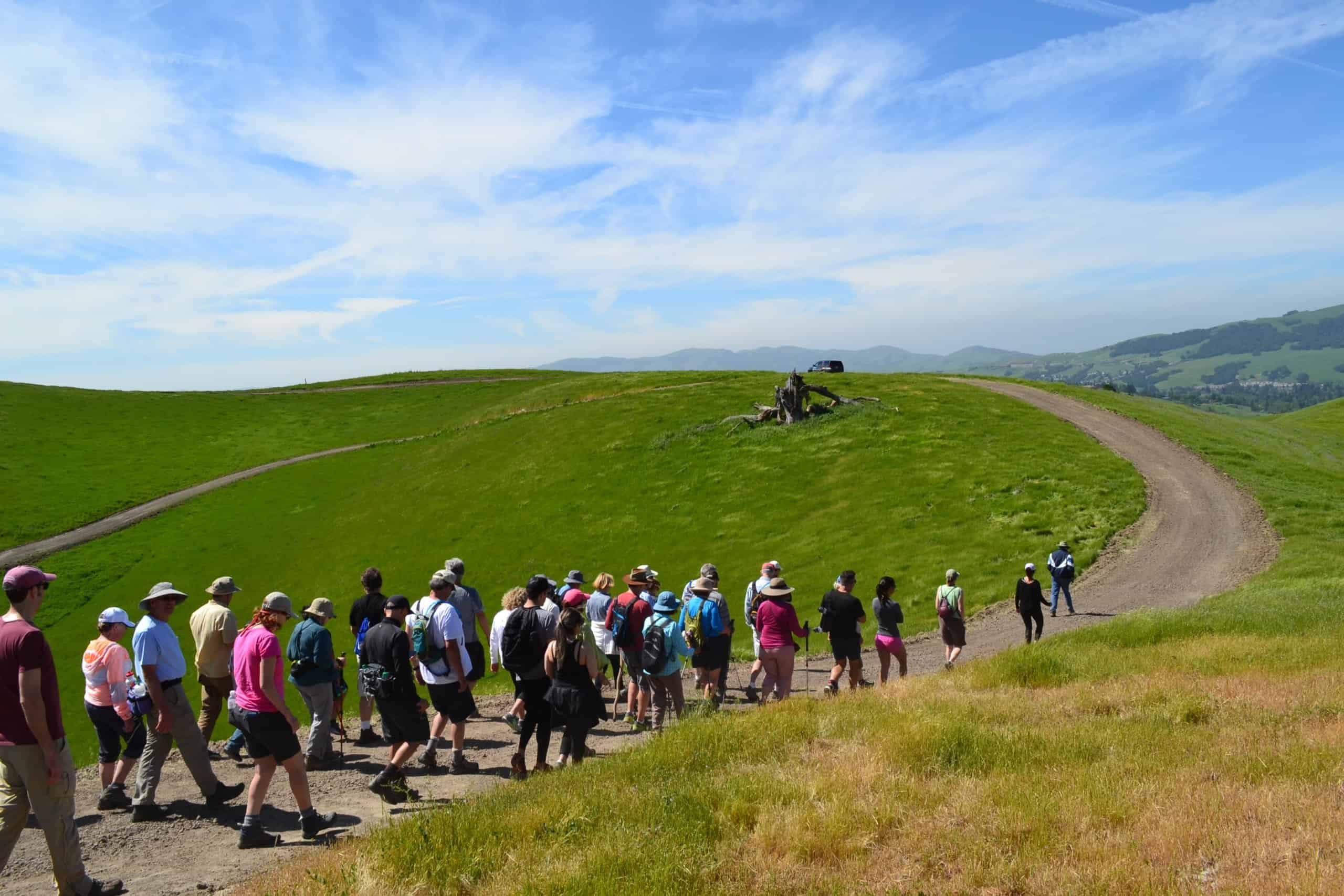 The project will build about 0.71 miles of multipurpose trail on the south side of Green Valley Creek. Additionally, it will build a crosswalk across Blackhawk Road. This crosswalk will connect to the existing trail along the north side of that road. The project also allows the East Bay Regional Park District to construct several miles of trails. These trails will extend from Diablo Road to the Sycamore Valley, connecting to Sycamore Valley Open Space Regional Preserve, the Iron Horse Trail, and potentially Mount Diablo State Park.

And the town of Danville will finally be able to create a multipurpose trail along another portion of the south side of Diablo Road, increasing safety for bicyclists, runners, walkers, and their dogs. The town of Danville has already identified sources of funding for this trail.

Without Measure Y, homes could have been built on the hillsides in plain view, scattered across the property. However, passing Measure Y protected the scenic views of this stunning landscape. Because of the way in which the homes will be sited, they will not be visible from Diablo and Blackhawk Roads.

The project will build electric vehicle charging facilities on each residential lot. This will encourage folks to switch from gas-powered cars to electric ones, reducing greenhouse gas emissions. That’s an important benefit!

And of course, land preservation is also one of the most essential actions we can take to address the climate crisis.