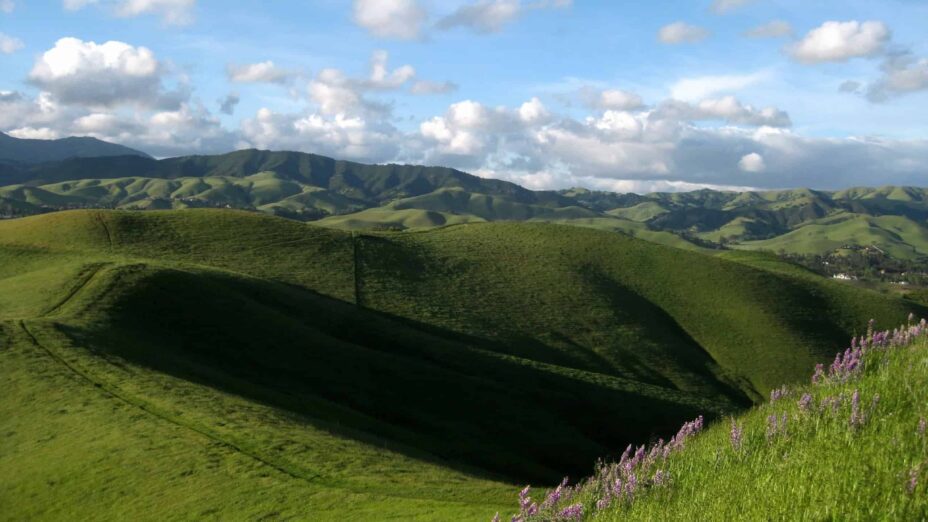 Foreground: Part of the hills surrounding Tassajara Valley that would be protected if Tassajara Parks is approved. Highland Ridge and Morgan Territory Regional Preserve are visible in the background. Image credit: George Phillips

After eight years of work by Save Mount Diablo, on Tuesday, July 13, 2021, the Contra Costa Board of Supervisors approved the 125-unit Tassajara Parks project.

With a 4 to 1 vote, the Board adjusted the urban limit line by 30 acres (in red) and created the 17,666-acre Tassajara Agricultural Preserve (in light green).  They also dedicated 727 acres (green diagonal lines) to the East Bay Regional Park District. 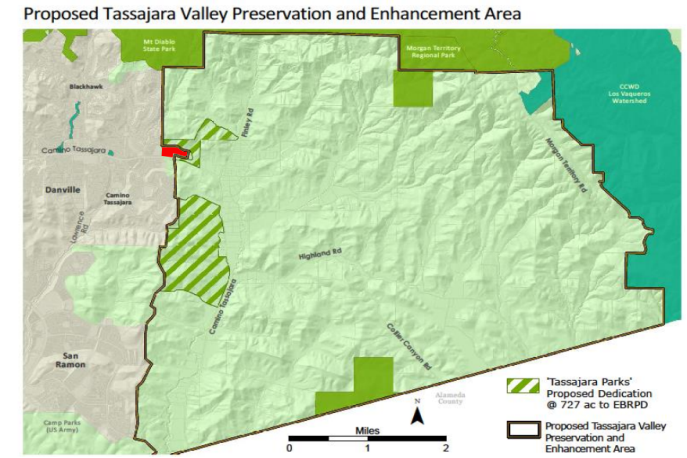 However, the real prize is the Tassajara Agricultural Preserve. There are 17,666 acres (27.6 square miles) in which Contra Costa County and San Ramon have agreed not to allow annexations or General Plan amendments in the preserve, and which will be incorporated into their General Plans.

We now have a double layer of protection over the Tassajara region: the urban limit line and the Tassajara Agricultural Preserve.

Save Mount Diablo has defended the Tassajara Valley and surrounding hills for over two decades. This rural area, characterized by rolling grassland and the important Tassajara Creek riparian corridor, is an agricultural buffer between protected open spaces in every direction.

Then in 2000, we worked together to tighten the Contra Costa County urban limit line (ULL; a line beyond which urban-style development can’t occur) to place the Tassajara Valley and other places outside the line, increasing their protection.

In 2004, when Contra Costa County’s transportation sales tax, Measure C, came up for renewal as Measure J, activists including Save Mount Diablo successfully included a provision that the county and all cities adopt voter-approved ULLs. In 2006, county voters and every city including San Ramon once again approved a ULL, with the Tassajara Valley outside the line.

In 2007, the “New Farm” project proposed to build 186 houses and a cemetery over 771 acres of the Tassajara Valley. Developers proposed to do this by changing the definition of what “urban” development is. If people accepted that development beyond the ULL wasn’t “urban,” then it wouldn’t matter if it was on one side of the line or the other.

Thanks to the work of Save Mount Diablo, concerned officials, and valley and nearby city residents, no one was fooled. So much resistance was generated that the developer would later table “New Farm.”

In 2010, we achieved a great victory in San Ramon against Measure W, which would have greatly expanded San Ramon’s ULL to include the Tassajara Valley and allow housing subdivisions over the whole area. With the help of San Ramon residents, we crushed it, with 72 percent of voters saying “no” to developing 1,600 acres of the Tassajara Valley.

Besides massive housing projects, there was also a cemetery proposed on 220 acres of the valley. Creekside Memorial Cemetery would impact rare plant and animal species, as well as the valley aquifer.

The local community was so concerned that when Save Mount Diablo led a hike in the summer of 2014 against this project, about 500 people, including local ranchers, showed up to signal their opposition! The cemetery project has gone quiet for several years.

The same developer that proposed “New Farm” has worked for years on a very different project, “Tassajara Parks.” In 2013, “New Farm” was tabled and the developer began meeting with Save Mount Diablo, cities, and other stakeholders to see if a compromise could be reached: he would get a return on his investment, and we could greatly benefit the public by dramatically reducing project impacts and threats to the ULL.

This culminated in recent approval of the Tassajara Parks project by the Contra Costa Board of Supervisors, which greatly contributes to the conservation of this region for wildlife, the public, and future generations.