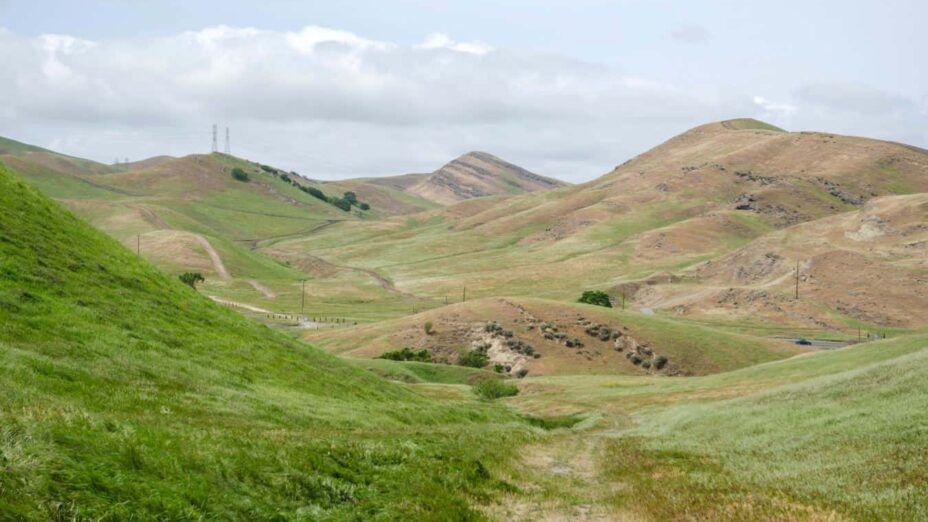 Featured image (above): Land that would be destroyed by the western end of the proposed James Donlon Boulevard Extension (foreground).
Photo credit: Scott Hein.

We are challenging a proposal by the city of Pittsburg to build a 1.71-mile road through the hills just below Black Diamond Mines Regional Preserve. The proposed road would extend from the western edge of the approved Sky Ranch II subdivision to the location of the proposed Montreux subdivision off Kirker Pass Road. The project would degrade views from Pittsburg as well as a preserve and nearby public lands. It would require filling in many canyons and creeks and involve massive grading of the hillsides and destroy the spectacular Wayne Thomas Ranch. We are concerned that the road may simply relocate bottlenecks while inducing growth that will quickly overwhelm any congestion relief. The project seems to benefit the nearby Seeno Company developments while opening up the Wayne Thomas Ranch to development, potentially eliminating agriculture on the ranch’s northernmost lands.

It would traverse steep slopes and canyons that provide important agricultural grazing land and wildlife habitat, cut connections between existing wildlife corridors, and result in significant animal mortality along the roadway.

It would simply relocate an existing traffic bottleneck and induce more growth, leading to more traffic.

It would result in significant visual impacts to the hillsides that provide the open space and aesthetic backdrop for eastern Contra Costa County, as well as violate several county policies designed to preserve scenic corridors and views.

Tell the Pittsburg City Council that the James Donlon Boulevard Extension is a bad idea and that the project should be denied.