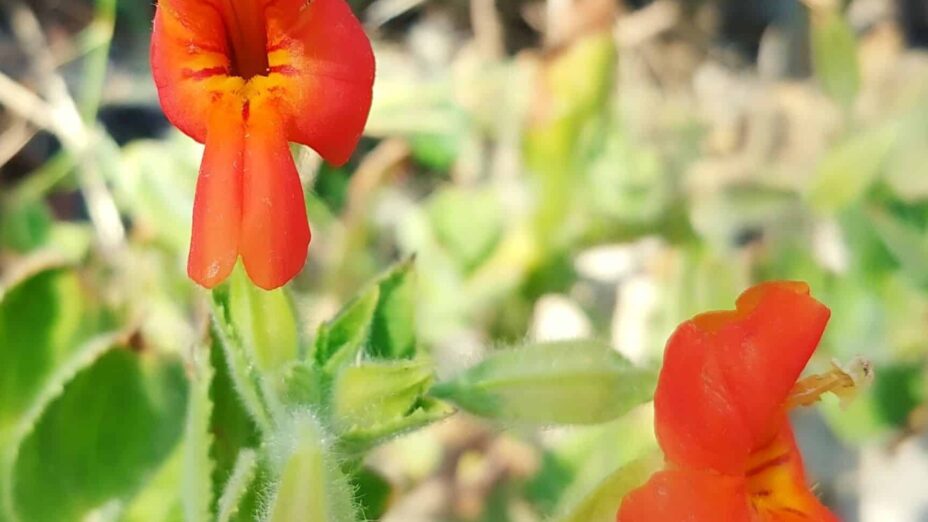 Scarlet monkeyflower is an herbaceous perennial with orange-red flowers that hummingbirds absolutely love. The plant gets to be around one to three feet tall and may be erect in sunnier spots or sprawling in shade. It can spread by rhizome or seed (and the seeds do not require any treatment). It prefers areas with consistent moisture (don’t let the roots dry out!) and part shade, but it can thrive in full sun too.

When hummingbirds feed on the nectar-rich flowers, they hover just below the stigma and anthers, so pollen gets stuck onto their forehead and transferred to other flowers.

Scarlet monkeyflower is a popular ornamental plant cultivated for its blooms. Great for native gardens or containers! Easy to sow from seed and maintain. Sow seeds in fall to early spring by placing them on the surface of moist soil. Please do not collect from wild sources; this plant is readily available in many local nurseries.

There are cultivars out there with yellow flowers, like the “Santa Cruz Island Gold.” Sometimes (rarely) the yellow-flowering version of this plant is found in the wild, which means the corolla lacks the anthocyanin pigmentation that makes the flowers red.

The species is native in the western United States and Mexico, from southern Oregon down to Baja California and as far east as New Mexico.

Erythranthe cardinalis is one of the first western plants introduced into European gardens in the 1800s. David Douglas, a famous botanical explorer, brought scarlet monkeyflower specimens to Europe for the first time in the 1830s. There was high demand for this plant by European gardeners soon after David Douglas’s introduction. Check out this cool article about David Douglas and the scarlet monkeyflower by Ventana Wilderness Alliance.

The genus Erythranthe is derived from the Greek erythros (red) and anthos (flower). Scarlet monkeyflower is the first species in the genus Erythranthe (nowadays there are a lot more species under this genus). The common name suggests that the flowers sometime resembles a monkey’s face.