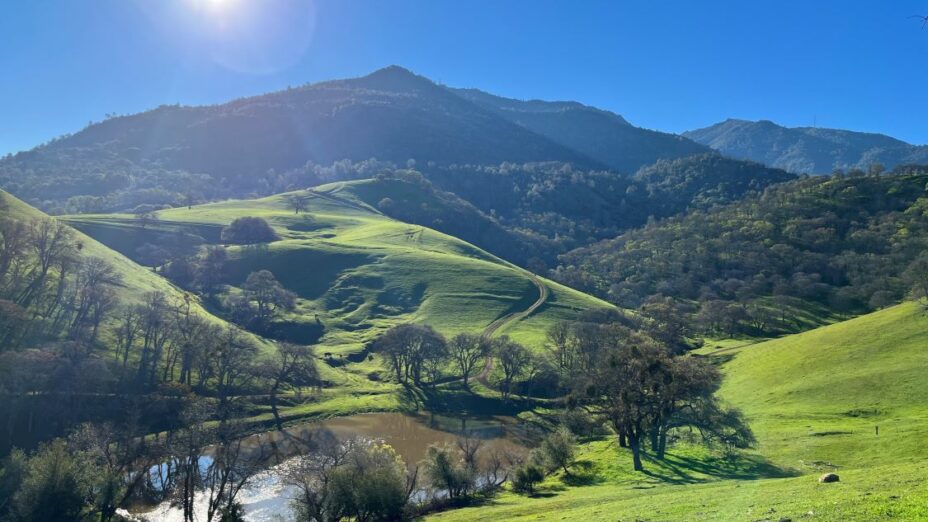 The property is part of the “Missing Mile,” a square mile of private land on the slopes of North Peak, and Save Mount Diablo’s fourth acquisition project there.

The Krane Pond property has been a priority for 50 years, includes a large spring-fed pond that is very important for wildlife, and is adjacent to Mount Diablo State Park.

In addition, an on-site building pad, neighboring subdivision, and fragmented ranchette landscape nearby all indicate what might take place if the property isn’t protected.

A jewel within Mount Diablo, the Krane Pond property has been a priority since Save Mount Diablo was founded in 1971.

If Save Mount Diablo can raise $500,000 within the next year—two $25,000 options to hold the property, a $400,000 purchase price, and $50,000 for initial stewardship and other related transaction costs—then the Krane Pond property will be permanently protected. 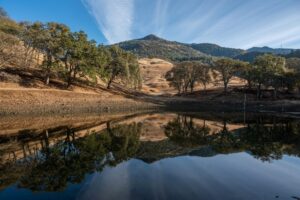 “The Missing Mile is one of our high priority land acquisition areas. This area is roughly a square mile made up of numerous privately owned open space acres that have not yet been conserved or developed,” said Save Mount Diablo Executive Director Ted Clement.

“The Missing Mile is on the slopes of Mount Diablo itself, and the area is contiguous with important conservation lands like Mount Diablo State Park.

“Over time, we have successfully done multiple land acquisition projects in the Missing Mile: we successfully acquired a perpetual conservation easement on almost 154 acres of the Concord Mt. Diablo Trail Ride Association land earlier this year; in 2016 we got about 88 acres of North Peak Ranch under an agreement that will have us acquire that land in fee simple title in 2026; and in 2006 we acquired the fee simple title to the 17.62-acre Young Canyon property. 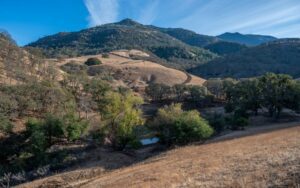 “Thus, amidst our 50th anniversary celebrations, it was very special to recently secure an option to purchase, and a purchase and sale agreement on the Krane Pond property, which is located in the Missing Mile.

“Now we have one year to raise the necessary funds to ensure this important Krane Pond property is permanently protected,” said Ted Clement. 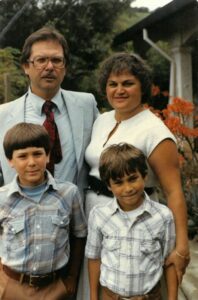 In 1978, Walt and Roseann Krane purchased 6.7 acres of land on the outskirts of Clayton bordered by Mount Diablo State Park and the meridian on the west side, Mount Diablo Creek on the north side, and property held by ranchers to the east.

The parcel is accessed by a little bridge that crosses over Mount Diablo Creek. The Kranes originally had plans to build a house for themselves and their two boys on the mountainside lot, which has grand views and great oaks, and back then had a 25-foot-deep lake. It’s become shallower over the years.

“Instead of building a house,” said Roseann Krane, “we decided to preserve the land. Walt loved the outdoors and our family camped and fished all over California. Walt adored our boys and was an Assistant Scoutmaster for 11 years.

“He bought 200 bass and stocked the lake and helped the kids build a dock. We spent time with Indian Guides, Boy Scouts, soccer, and many friends picnicking, swimming, boating, fishing, and horseback riding at the site.

“We have been long-time supporters of Save Mount Diablo. When Walt retired in 2000, he became a professional artist and donated his oil paintings to Save Mount Diablo’s Moonlight on the Mountain fundraiser. 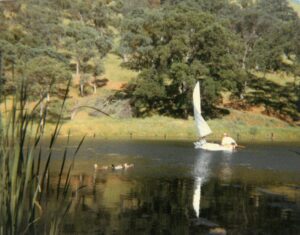 “Last May 2021, Walt passed away from leukemia. I thought that the best way to honor Walt’s memory and love of the outdoors, was having our open space preserved by Save Mount Diablo, and eventually be part of the state park system.”

The Krane Pond property is part of North Peak’s Young Canyon and is bordered by a small spur ridge. Its ecological significance eclipses its size.

The property includes one of the largest ponds on the north side of Mount Diablo and is critically important for Mount Diablo’s wildlife.

It can help sustain a multitude of species from ground squirrels to mountain lions and even rarer endangered species such as California red-legged frogs and Alameda whipsnakes.

Development has carved its way into Diablo’s foothills below the property’s border. Krane was threatened by Clayton’s Marsh Creek Specific Plan 30 years ago while a neighboring parcel was developed into the Oakwood Estates subdivision.

Save Mount Diablo helped shrink the specific plan, and the county and Clayton’s Urban Limit Lines gained strength over the years. Krane is adjacent to the Clayton city limits but just outside the Urban Limit Line.

Had developers acquired this property, they would have graded the ridge and developed much of the acreage. Protecting this property halts development in its tracks, saving more of Mount Diablo’s open space.

Beginning in 1971 SMD’s co-founder, botanist Mary Bowerman, began creating acquisition priority lists based on her decades of research on the mountain. The Missing Mile properties, including Krane, were high on the list.

During the fundraising period for the $500,000, Save Mount Diablo will survey the property boundaries, which will be necessary for work on property fencing and dam repair. If fundraising is successful, initial stewardship will include fence repair and maintenance of the pond’s earthen dam. 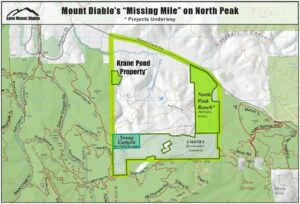 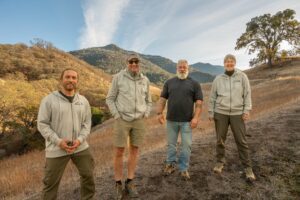 High resolution photos and B roll of the Krane Pond property are available by request. Contact lkindsvater@savemountdiablo.org.