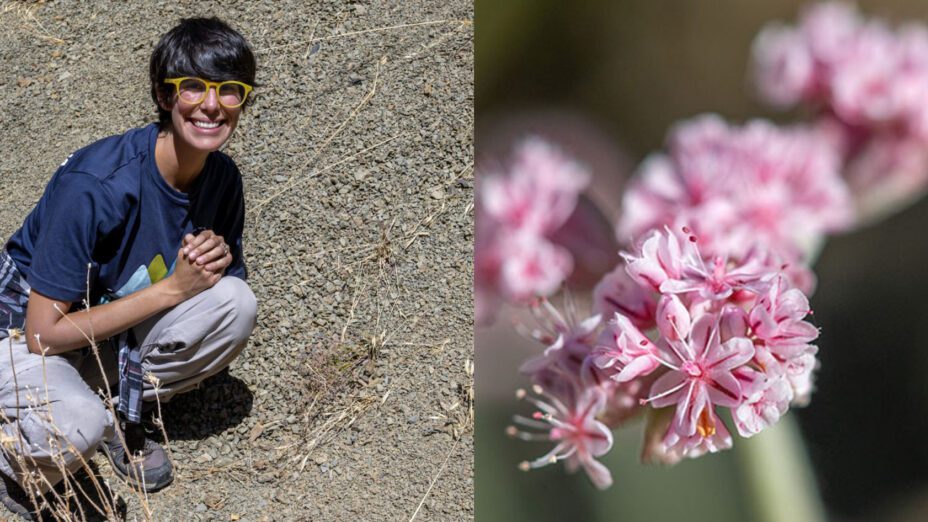 CONTRA COSTA COUNTY—Inching back from the brink of extinction, the third known population of the critically endangered Mount Diablo buckwheat (Eriogonum truncatum) was discovered on one of Save Mount Diablo’s properties in August 2022. Discovered by Save Mount Diablo’s Education & Outreach Associate, Denise Castro, this population currently consists of less than 100 plants.

“It was almost too good to be true. My heart skipped a beat the moment it dawned on me that I could potentially be looking at a new population of Mount Diablo buckwheat. I tried my hardest not to freak out, but my heart and mind were racing.” Still in disbelief, Denise Castro described her initial shock upon making the discovery.

“The little pink flowers looked too familiar. My gut screamed yes—this is it!”

The day Denise Castro discovered the Mount Diablo buckwheat started off as an ordinary workday. “I went out on a mission to remove invasive stinkwort on one of Save Mount Diablo’s properties and as my eyes were scanning the land for my target, they got caught on something rather odd.” 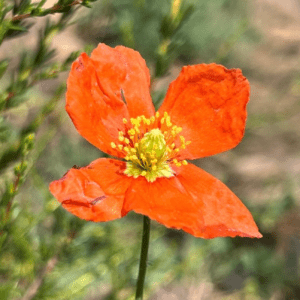 This isn’t Denise’s first major discovery. In 2021, she discovered the only blooming population of rare fire poppies (at right) in the entire 396,000-acre SCU fire footprint and in a completely new location.

An experienced botanist and environmental educator, Denise is deeply familiar with California’s native plants. Much of her career has been spent leading Save Mount Diablo’s educational programs and stewarding the various properties that have been protected by Save Mount Diablo.

“A few weeks prior, I had joined the Mount Diablo Buckwheat Working Group to collect seeds from the endangered plant at one of the two currently known populations for future reintroduction purposes.” Her recent experience with the buckwheat paid off.

“I held my breath as I carefully maneuvered my way closer. . . . the most important clue that made me immediately stop in my tracks was that I was looking at a stringy plant growing on a fresh shale landslide, and it looked very similar to the population I had collected seed from.”

“Time sped up and I couldn’t think of anything else but to get the word out to my supervisor, Sean Burke, Save Mount Diablo’s Land Programs Director.” Denise said. 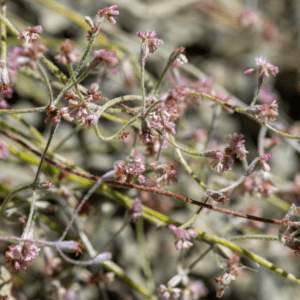 “I hurried back to my gear and fumbled around for my phone, barely able to hold my excitement in. He answered and the first thing I said was ‘Did you know we have Mount Diablo buckwheat on [one of our conserved lands]?’ He went quiet for a second before responding with, ‘Not that I know of.’ It was all too much for me. I was ready to explode with whoops of joy and start dancing right there and then.”

The next step was to get the plant formally identified. “I had to rein myself back. We needed confirmation first. There are over 125 species of buckwheat in California, and this could be any one of them. I took a bunch of photos and hurried out so I could email them to Heath Bartosh, founder of Nomad Ecology, a rare plant specialist and a former member of Save Mount Diablo’s Board of Directors. Heath also discovered the second and largest existing population of Mount Diablo buckwheat in 2016 in Black Diamond Mines.  Heath came out to the new site two days later and spent some time keying out the plant. After a few nail-biting hours, the verdict was in. It is in fact Mount Diablo buckwheat. I had discovered a third population.”

“Another population being out in the world is a fantastic prospect for the continued survival of a species that was really on the brink of extinction—less than 100 wild plants after its rediscovery in 2005—and has an extremely small range.”

Save Mount Diablo’s co-founder, Dr. Mary Bowerman, worked to catalog this species, recording the plant in two locations in 1930 and 1936, two of seven historic records. No one recorded the plant after 1936—for 69 years.

According to Barbara Ertter, former Director of UC Berkeley’s Jepson Herbarium, “We’ve been calling the Mount Diablo buckwheat the holy grail for botanists working in the East Bay—it’s been the number one priority that we’ve been trying to relocate.”

But with no luck. The buckwheat was presumed to be extinct, lost to invasive species and development of its habitat. 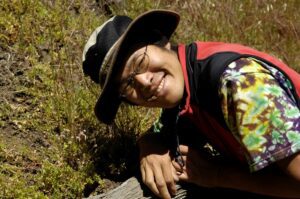 Then in 2005 a population was discovered by UC Berkeley graduate student Michael Park on land protected by Save Mount Diablo.

After 69 years of being presumed extinct, there were only 20 individual plants in the entire world. News of the possible rediscovery of ivory-billed woodpeckers, also long feared extinct, excited public interest and news of the buckwheat’s rediscovery quickly spread around the world.

Professionals from Save Mount Diablo, the California Native Plant Society, UC Berkeley, and other organizations formed the Mount Diablo Buckwheat Working Group, of which Denise is now a member, with the goal of saving the species.

About a year after the discovery in 2006, the UC Berkeley Botanical Garden began propagating the buckwheat. Efforts to increase the population were slow, a continuous effort to save the critically endangered wildflower. Over the next 10 years, the population inched up to 200 plants. 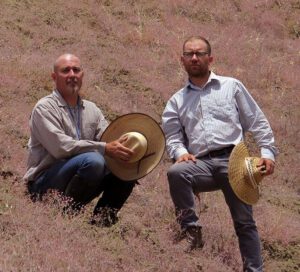 Then in 2016, a second population was discovered by Heath Bartosh in Black Diamond Mines Regional Preserve. It was what he described as “the find of a career.”

In 2020, a study funded by Save Mount Diablo’s Mary Bowerman Science and Research program found that the buckwheat prefers south-facing slopes with well-drained sandy soil and minimal vegetation cover.

Little else is known about the buckwheat’s preferred conditions; it was only beginning to be cataloged before it vanished after 1936.

Earlier this year, Mount Diablo buckwheat was observed to be surviving extreme drought conditions in large numbers. Despite these conditions, this hardy little plant has been able to thrive at one of the locations. It’s hoped that the second population will continue to survive and grow in the coming years.

Now in 2022, a third population of Mount Diablo buckwheat has been discovered on Save Mount Diablo’s protected land. The exact location of this discovery will not be shared with the public to ensure that this sensitive endemic species is protected from harm.

As mentioned, little is known about the plant. It typically blooms from March through June but flowering took place this year starting in January because of early rains. Discovering a blooming population in August was unexpected. The location has some different features from the other two populations too, which could aid in continued searches and management.

Mount Diablo buckwheat can be hard to spot. Someone might hike right by it without realizing what they’re looking at. It’s an annual herb that can grow up to two and a half feet tall under the right conditions. Each plant has dozens of small pink flowers that bloom at the ends of its stems.

According to Denise, “The plant itself is most noticeable when there’s a big group of them, it looks like a hazy pink cloud during its flowering season, otherwise, it’s a stringy-looking plant with small clusters of pink flowers that easily blend into its surroundings. Since I had seen the endangered species before, I had a sense of what to look for and where to look for it.”

Over its 50-year history, Save Mount Diablo and its partners have helped to expand protected land in the Diablo region to over 120,000 acres. Two out of the three known populations of the Mount Diablo buckwheat are on land that Save Mount Diablo worked to protect from development. 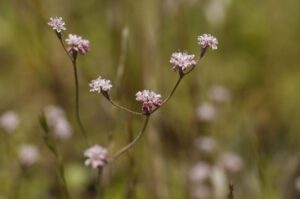 Eastern Contra Costa County is a nationally recognized biodiversity hotspot, but native species such as Mount Diablo buckwheat are threatened by development and competition from invasive species.

“We joke that Denise was channeling our co-founder, botanist Mary Bowerman—which means walking about 10 feet per hour checking out every plant. Mary would be especially pleased that Denise made the discovery—she loved supporting young women scientists—and that the discovery is a new location,” said Seth Adams, Save Mount Diablo’s Land Conservation Director and who knew Bowerman before she passed away in 2005.

“Seeds of such a rare plant can be living in the soil seed bank for a long time until conditions are right for it to germinate and be discovered. The survivability of seeds, even as tiny as Mount Diablo buckwheat, is a reminder of the remarkable resiliency of our native flora. . . . I’m certain Mary Bowerman is smiling down from above, elated that the flora of Mount Diablo she loved and cared for so much, knowing that one of the most precious plant species in our region is making a comeback when we all had little hope for its survival just 17 years ago,” said Heath Bartosh.

“It was a heart-stopping moment. . . . It’s not every day you find a new population of an extremely rare and endangered species,” Denise Castro said, reflecting on her discovery. “Although, as much as it seems like this was a random stroke of luck, this discovery didn’t happen by chance. It was made possible because a lot of hard work was put into ensuring the land was protected from further development and stewarded to provide an ideal habitat for native plants like Mount Diablo buckwheat.”