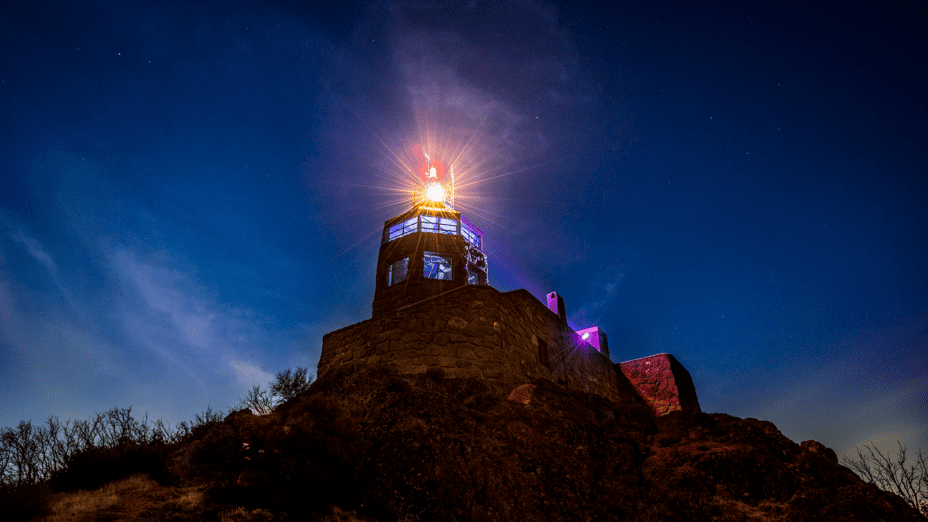 Viewing of the new USS Arizona exhibit at the CSUEB Concord Campus will be available from 3:00 PM to 3:45 PM as well as 45 minutes post ceremony.

The outdoor ceremony will commence at 3:45 PM.

The program begins with the posting of colors, pledge of allegiance, and national anthem, followed by opening remarks by Ted Clement, Executive Director of Save Mount Diablo and then ceremonial observations by Eddie Guaracha, Diablo Range District Superintendent for California State Parks.

Robert Phelps, PhD, Executive Director of California State University, East Bay Concord Campus will then be invited to speak. Pearl Harbor survivors in attendance will also be invited to speak. A performance of “America the Beautiful” by Erin Hegerty will follow. Then Frank Dorritie of Bugles Across America will perform “Taps.”

“The Beacon lighting is a tribute to those individuals that lost their lives at Pearl Harbor,” remarked Earl “Chuck” Kohler, one of the few remaining survivors in Contra Costa County.

The ceremony is also an opportunity to honor the survivors.

The Beacon on Mount Diablo was originally installed and illuminated in 1928 to aid in transcontinental aviation. It is one of the four guiding beacons installed along the west coast by Standard Oil of California and is the only one known to still be operational.

After the attack on Pearl Harbor, the Beacon’s light was extinguished during the west coast blackout, for fear it could enable an attack on California. It stayed dark until Pearl Harbor Day in 1964, when Fleet Admiral Chester Nimitz, Commander in Chief of Pacific Forces during World War II, relit the Beacon in a commemorative ceremony and suggested it be illuminated every December 7th to honor those who served and sacrificed.

Since that day, Pearl Harbor veterans and their families have gathered every December 7th to see the Beacon light shine once again.

The Beacon now shines brighter than ever since it underwent an extensive restoration process in 2013 (thanks to a campaign led by Save Mount Diablo) to ensure it continues to shine for many more years. The Pearl Harbor Survivors now know that the Beacon will shine long after they are gone.

The Beacon is lit at sunset and shines all night on this evening each year. It has not been lit since Sunday, April 11, 2021 when Save Mount Diablo concluded a year of lighting it weekly to bring light and hope to our region during the worst of the pandemic.

Save Mount Diablo is a 501(c)3 nonprofit organization and nationally accredited land trust founded in 1971 with a mission to preserve Mount Diablo’s peaks, surrounding foothills, and watersheds through land acquisition and preservation strategies designed to protect the mountain’s natural beauty, biological diversity, and historic and agricultural heritage; enhance our area’s quality of life; and provide recreational opportunities consistent with the protection of natural resources. The organization is currently involved with its important year-end appeal to raise critical resources for its time-sensitive land conservation mission. To learn more and to support Save Mount Diablo, please visit www.savemountdiablo.org.

What:  Save Mount Diablo; the Sons and Daughters of Pearl Harbor Survivors Association, Chapter 5; and California State Parks will light the “Eye of Diablo,” the Beacon atop Mount Diablo to memorialize National Pearl Harbor Remembrance Day. As the number of survivors has decreased over the years, the number of people attending the ceremony in honor of these heroes has increased, including many sons and daughters vital to organizing the service.

Where: The ceremony will be held outdoors at the California State University, East Bay Concord Campus, 4700 Ygnacio Valley Road, in Concord.

Access: Parking is available on campus, and parking fees will be waived for this event. The ceremony will be held outdoors. See campus map.

For more information on the Beacon:

Photo: Mount Diablo Summit Beacon, the “Eye of Diablo,” by Stephen Joseph. Additional high-resolution photos of the Beacon and the Pearl Harbor Survivors are available upon request.