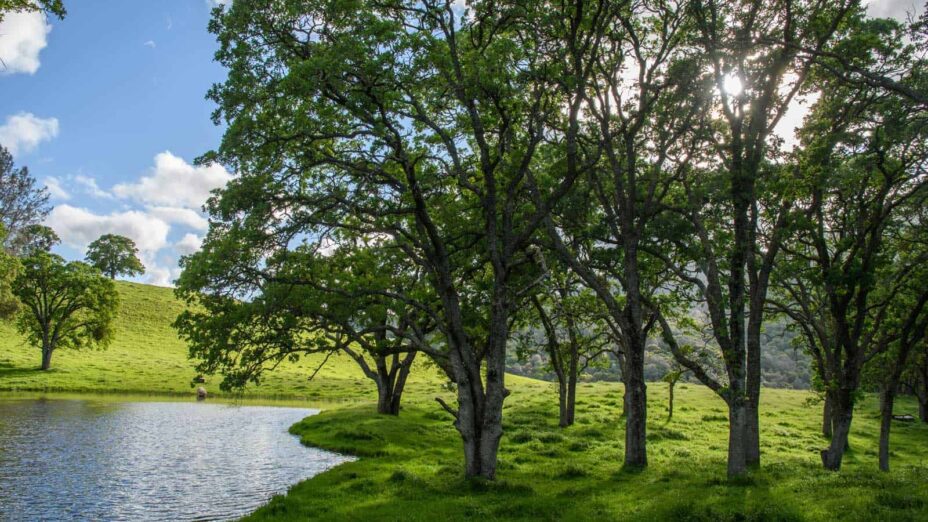 CLAYTON, CA—For 40 years an approved 40-unit subdivision has quietly threatened the last 95 acres of the historic Anderson Ranch, or Pacini property. It’s the north end of Morgan Territory Ridge, near the intersection of Marsh Creek and Morgan Territory Roads, east of Clayton and in a location with unusual geology—small volcanic domes. Save Mount Diablo acquired the 95 acres on November 28, 2017, for $800,000. Read the article by Bay Area News Group featured on East Bay Times.

“After years of efforts, and despite being threatened with a county-approved 40-lot subdivision plan for 40 years, Save Mount Diablo is extremely relieved and pleased to announce that it has successfully acquired and protected the 95-acre Anderson Ranch, which is rich in conservation values in the strategic Morgan Territory area. We thank our wonderful supporters and partners for helping us have the ability to complete this deal and with it deliver a holiday gift that will give lasting green returns to our community,” said Ted Clement, Save Mount Diablo Executive Director.

The “Mountain Meadows Unit II” project has loomed over Morgan Territory, a beautiful plateau where development would be highly visible, threatening views of the area. The threat continued despite the creation of urban limit lines and evolving growth management policy that block similar developments.

The development proposal has reared its head every 10 years or so, then subsided. Each time neighbors and Save Mount Diablo (SMD) have responded but have never been able to stop the project completely, as it received one county development approval extension after another.

Until now. The owners of the parcel, the Pacini family, initially placed the property on the market in 2016 for $3 million. They had previously agreed to sell the parcel for development for $5.5 million, but the family and developers were delayed by development costs and endangered species issues, and the deal eventually fell apart. In April 2017, when the price dropped to $1.3 million, SMD got involved.

SMD was spurred on by a new threat—when Morgan Territory Road washed out last spring, a temporary bypass was located on the Anderson Ranch and suddenly the property became much more accessible and visible to potential buyers.

“Along with neighbors, Save Mount Diablo opposed development at Anderson Ranch for decades but we also helped create a pathway for this spectacular property’s long-term preservation. It’s a remarkable plateau with incredible views, a park-like appearance, and great natural values including a beautiful section of Marsh Creek,” said Meredith Hendricks, SMD Land Programs Director.

“After years of effort, I think the Pacini family simply wanted to resolve the sale of the property,” said Hendricks. “They agreed to sell at the appraised value of $800,000, but we had just 90 days to come up with funding. We closed escrow on November 28, 2017.”

A fair bit is known about Anderson Ranch because it has its own chapter, “Caretakers of the Past,” in Anne Homan’s history of Morgan Territory, The Morning Side of Mount Diablo. According to Homan’s book, “Chet Anderson had heard of Morgan Territory from his friend Sylvester Olofson. He first came out from Oakland to visit the area in 1918 and promptly fell in love with it. Chet and Gertrude Grace Fey were married on 7 July 1925. On 20 September 1938, they paid Mary Correa Azevedo Cardoza $12,000 for 435 acres on Morgan Territory Road.”

“After tearing down the existing old ranch buildings, [the Andersons] built a barn and then a garage into which they moved in 1938 while their house was being built [4135 Morgan Territory Road]. Final construction costs for the house in 1941 were $6,500. The Andersons raised horses, sheep, cattle, and pigs and grew hay to feed the animals. Their hayfield was the level plot just north of their house site.”

The Andersons lived a full life in Morgan Territory. Bit by bit through the years, Chet sold all his property in Morgan Territory except for the five acres including the house. He first sold land on the west side of the road in 1964 and sold the last acreage in 1988. Chet and Gertrude Anderson both lived well into their 90s, Chet to age 93 when he passed in 1990. Gertrude passed away in 1993.

In 1971, most of the historic Anderson Ranch was purchased by developers and the Mountain Meadows subdivision proposed, the first phase west of Marsh Creek. Twenty-one, roughly one-acre lots were created in the first phase, in the northern mile of Morgan Territory Road, including Whispering Pines Road, Shale Cliff Court, and Tumbleweed Court. Together the houses on those streets made up Mountain Meadows, Unit I.

In 2004, Robert Pacini entered into a contract to sell the property to a developer, The Land Preserve, LLC, for $5.5 million. The plan was for the buyers to build a 40-lot luxury residential single-family home subdivision.

The heroes were threatened species that had been added to the Endangered Species list in the years since the project was originally proposed, including California red-legged frog, which is found in Marsh Creek and an on-site pond; and California tiger salamander and Alameda whipsnake, which are found nearby. With all the delays, the purchase contract was amended and extended repeatedly.

In mid-2007, Robert Pacini passed away, and ownership passed to a group of trustees. A disagreement rose over further extensions of the development contract, and eventually, the deal fell apart.

Ironically, Save Mount Diablo, which had opposed the project for years, was the solution. SMD had begun a program piecing together parcels with segments of Marsh Creek—the second longest, least disturbed creek in the county and one incredibly important to wildlife around Diablo. Anderson Ranch includes 2,100 feet of Marsh Creek.

The high point of the property is 890’—but the views suggest much higher elevations. The property is really a series of knolls rising south up onto small plateaus, crossed by several fire roads that include spectacular views in every direction, and up more heavily wooded Morgan Territory Ridge toward Redleg Peak.

Mount Diablo looms to the west past rolling grasslands. A little further south, views stretch up Curry Canyon to Windy Point. To the north are Kreiger Peak, Irish Canyon, and the new Clayton Ranch addition to Black Diamond Mines Regional Preserve and the steep ridges above Marsh Creek Road.

Blue oak woodland covers about a third of the property. Two-thirds are beautiful grasslands. There are two north-facing canyons adjacent to the County Detention Center property, including live oak-bay woodland, and one of the most beautiful ponds in the area, closely edged by oak woodland framing the view of Mt. Diablo. The dam on another pond lower down is broken, but it still retained some water. In the woods, there are volcanic rocks—not unexpected given nearby mini volcanoes east of Anderson Ranch, and at Perkins Canyon west of the property—but so far unmapped by geologists.

The property drops down to the western boundary, most of which is the centerline of Marsh Creek, with several large floodplains. The creek is broad with wide sinuous gravel floodplains and braided threads of stream, thick with large riparian trees and vegetation: oaks, bays, sycamores, buckeyes.

Anderson Ranch isn’t currently a natural addition to parks or for public recreation. It’s adjacent to the large County Detention Center property, including another nice stretch of Marsh Creek. Its legal access is through a neighborhood and the pavement stops at Marsh Creek, with need of an expensive bridge.

Now that SMD has completed the purchase, they will spend the next few years getting to know the property and its management needs. They are arranging to continue grazing right now.

“Save Mount Diablo, with the help of our supporters and partners, will continue to piece together priority parcels like Anderson Ranch along Marsh Creek,” said Clement. “Looking ahead, we might hold this property long term and will try to reimburse our costs for this acquisition with fundraising. Or we might locate a single one-acre house site, protect the remaining 94 acres with a conservation easement, and resell the property to a private party. Although our exit strategy isn’t yet clear, we’re being visionary and we took a chance by stretching to protect an important property while it was available and at risk.”

SMD is a nationally accredited, nonprofit land trust founded in 1971 with a mission to preserve Mount Diablo’s peaks, surrounding foothills, and watersheds through land acquisition and preservation strategies designed to protect the mountain’s natural beauty, biological diversity, and historic and agricultural heritage; enhance our area’s quality of life; and provide recreational opportunities consistent with the protection of natural resources. Learn more at https://savemountdiablo.org.

Image 2 – Save Mount Diablo is buying 95-acre Anderson Ranch in Morgan Territory. View north and including one of two ponds on the property. Photo credit: Scott Hein.