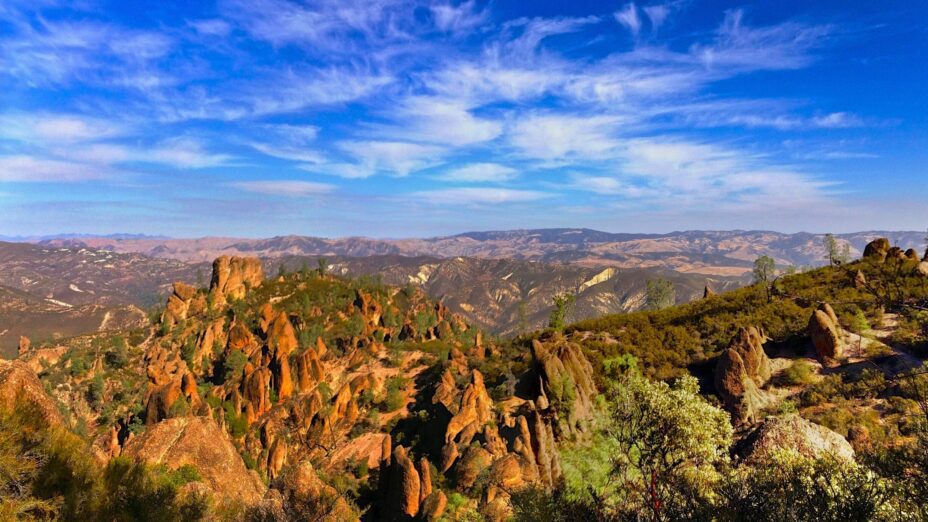 Eighty miles southeast of San Jose lies Pinnacles National Park, over 26,000 acres of oak savanna, grasslands, chaparral, and unusual volcanic rock formations. The park is situated in the southern Gabilan Range, bordered by Highway 25 on the east and Highway 101 on the west.

A short drive down Highway 25 also brings you to Clear Creek, Peach Tree Valley, and Panoche. All of these locations, including Pinnacles itself, are part of the Diablo Range (the Gabilan Range is part of the larger Diablo Range).

A Fiery and Tectonic History

The Pinnacles-Neenach Volcanic Field was active 23 million years ago 195 miles southeast from where Pinnacles National Park is currently located. 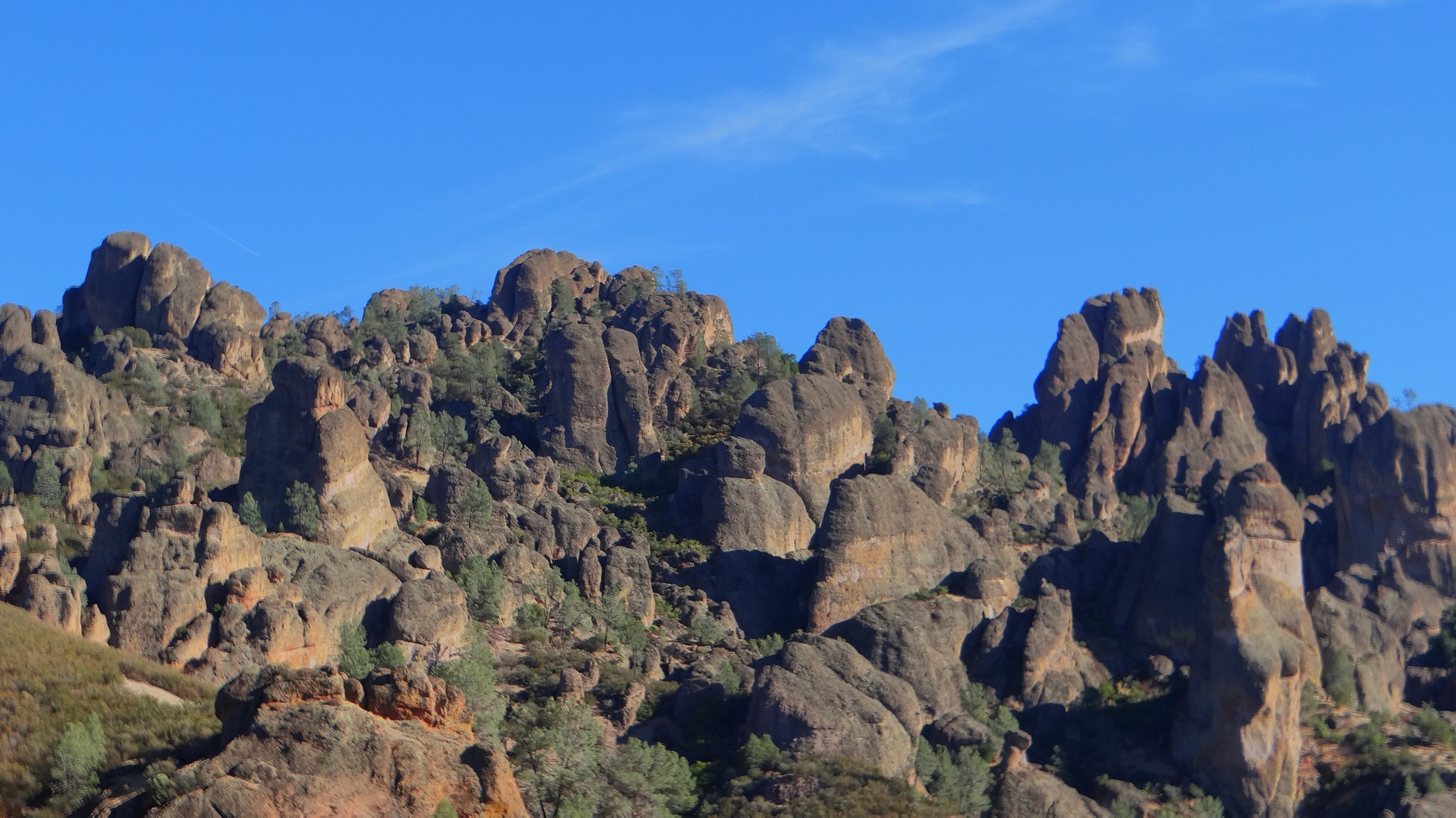 Volcanic activity formed the unique rock structures that we see today, and then the San Andreas Fault split the volcano and the rocks, carrying them to their present location. Today, there are matching rocks hundreds of miles away, a trail of geologic history littering the landscape.

Earthquakes and tectonic activity also formed Pinnacles’ famed talus caves. Talus caves are formed when boulders fall into gorges or shear fractures. These caves are home to many creatures, including several species of bats and endangered California red-legged frogs. 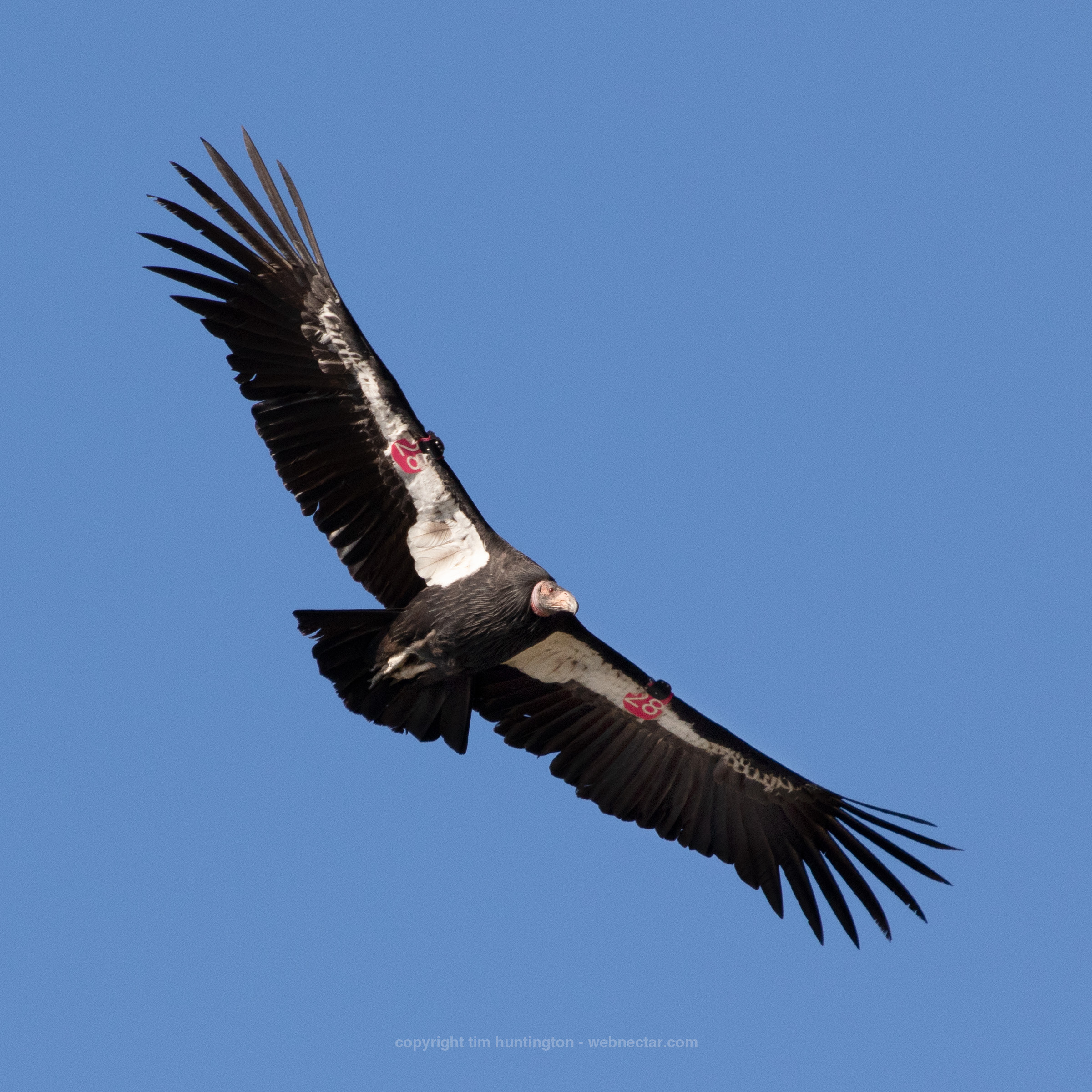 Pinnacles Condor 828 soaring through the skies. Photo by Tim Huntington.

In the late 1980s, the last 22 California condors were captured to ensure their survival. Since then, their population has increased to almost 500 individuals (more than 300 of which fly free) thanks to the help of captive breeding programs that ensure early survival rates remain high.

This summer, Pinnacles Condor 828, the first wild-born California condor, made multiple journeys northeast to the area around Mount Diablo. She is the first California condor in over a century to return to this area, and the implications for the condors’ return are tremendous.

Along with its geological and ecological richness, Pinnacles National Park is also a hot climbing destination.

Sean Burke, Save Mount Diablo’s Land Programs Director, is an avid climber and frequents Pinnacles National Park. Sean is also a certified climbing instructor and will be hosting climbing events at Pinnacles as part of our Discover Diablo program next year. 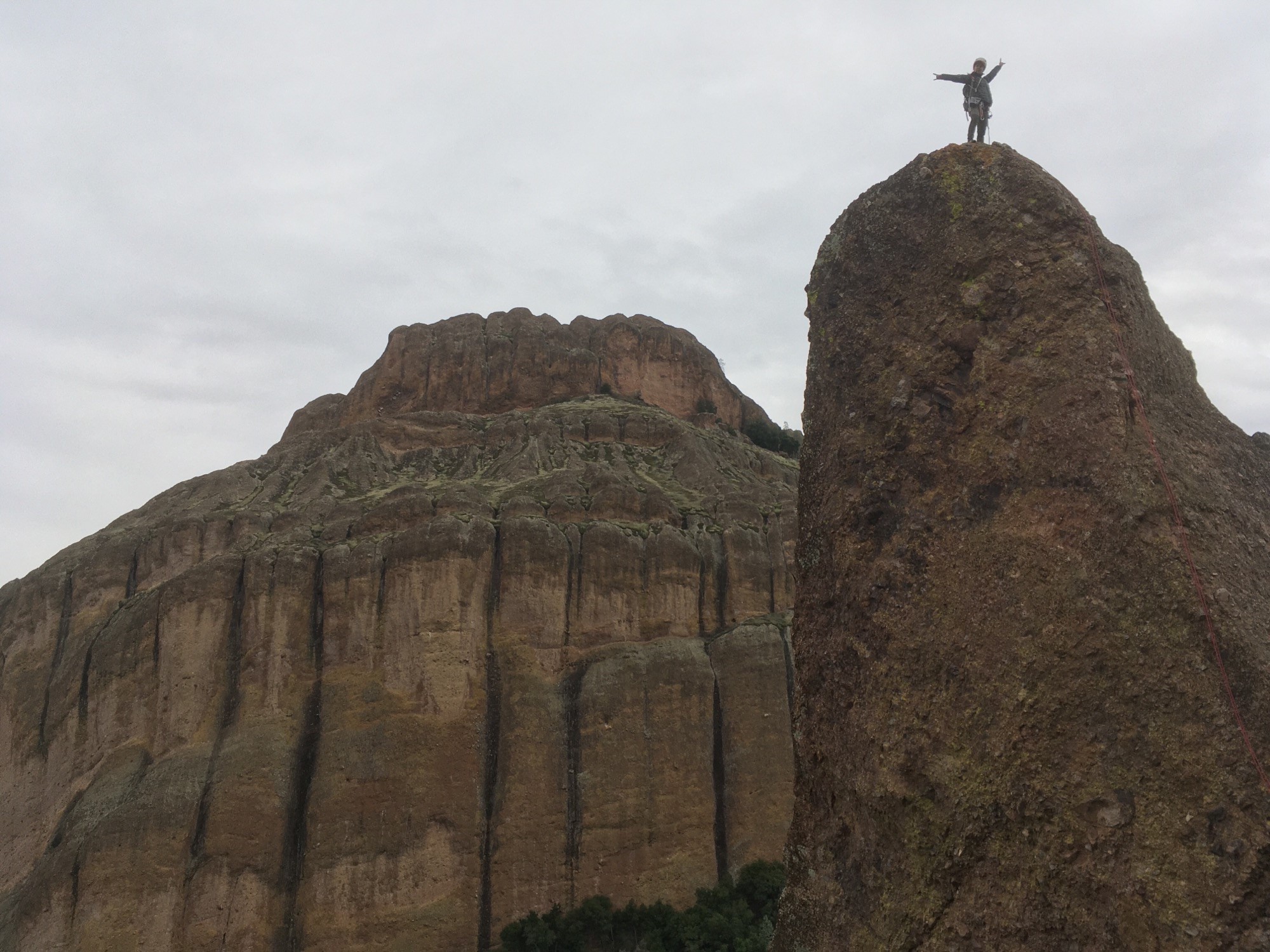 The rock formations in Pinnacles National Park are great for rock climbing. Photo by Sean Burke.

By reaching out to different groups, we will connect more people with nature. People who love and appreciate nature are more likely to give back to nature.

For example, Yvon Chouinard, founder of the clothing company Patagonia, is also a climber. He decided to make ethically sourced and sustainable outdoors clothing after being inspired by the mountains he climbed. 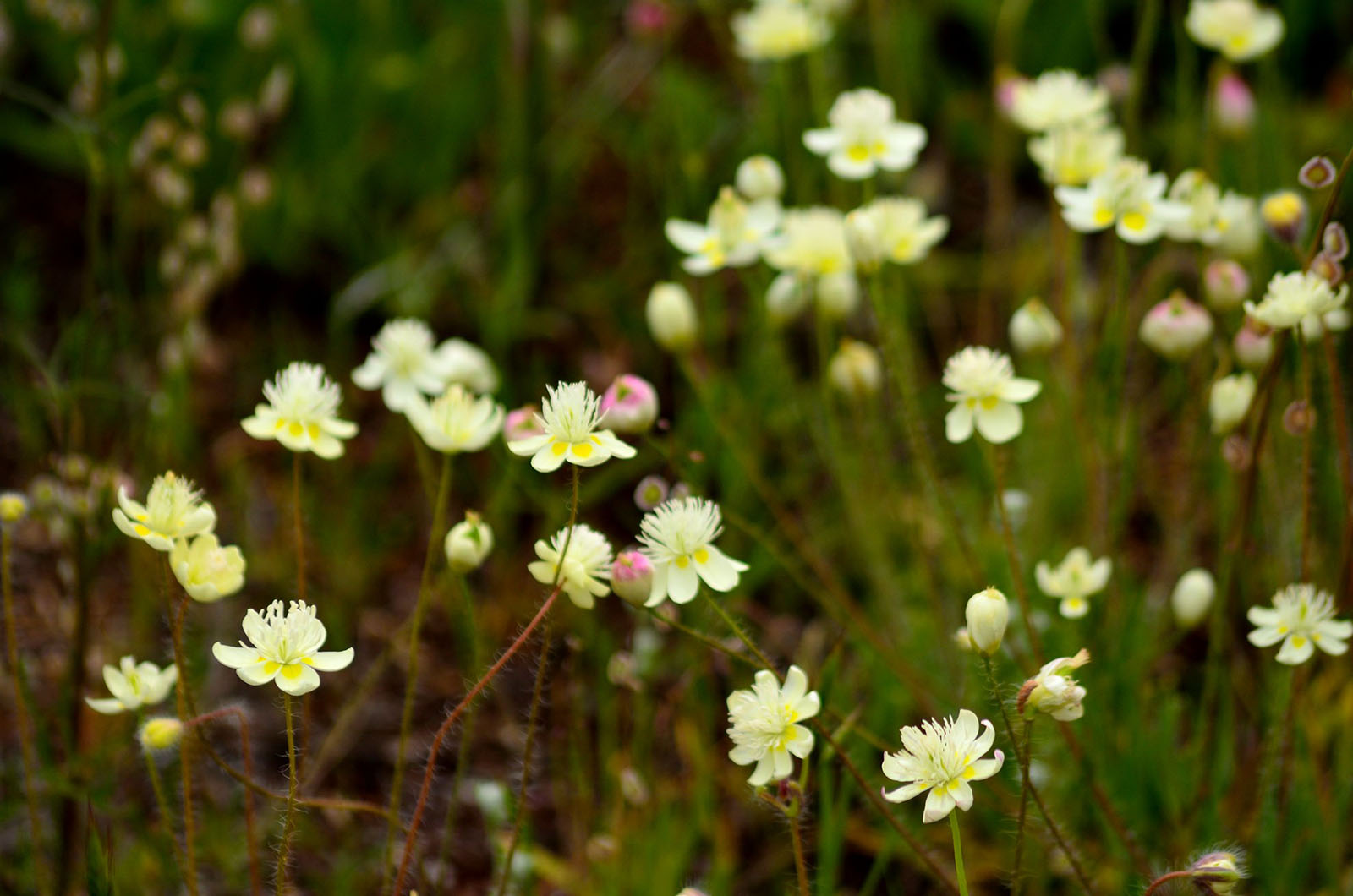 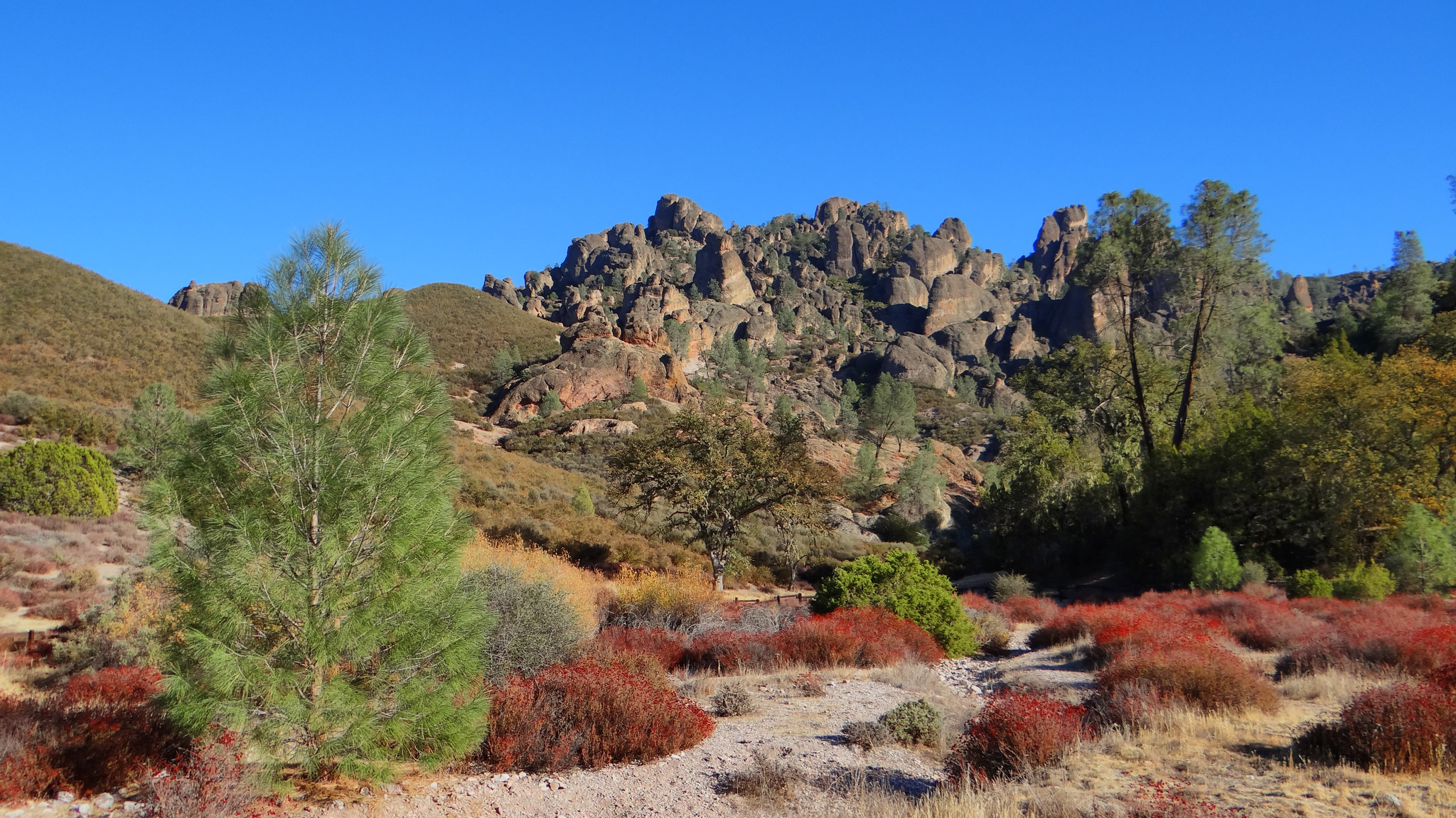 Pinnacles National Park is home to a number of rare plant and animal species. Photo by Rene Rivers / CC BY-NC-ND 2.0

Regardless of where your interests lie, there is something for everyone at Pinnacles National Park.

Save Mount Diablo has expanded its geographic focus further south down the 200-mile Diablo Range to the Santa Clara County line. And we’re letting people know about all the interesting features that are hidden across the entire 12-county range. Stay tuned as we feature more hidden natural treasures in the Diablo Range.