Rare Birds Could Force Windmill Projects to Be More Sensitive

For the first time in over 100 years, Contra Costa’s skies were crossed by one of the largest flying creatures on the planet, the California condor. Pinnacles Condor 828 checked out the area around Mount Diablo this summer, setting multiple precedents in recent history.

Condor 828 is also the first wild-fledged condor from Pinnacles National Park; most California condors in the Pinnacles Condor Recovery Program are born and raised in captivity before being transferred to Pinnacles to ensure early survival rates. Then, once they are tagged with radio or GPS transmitters, they are free to fly wherever they please. 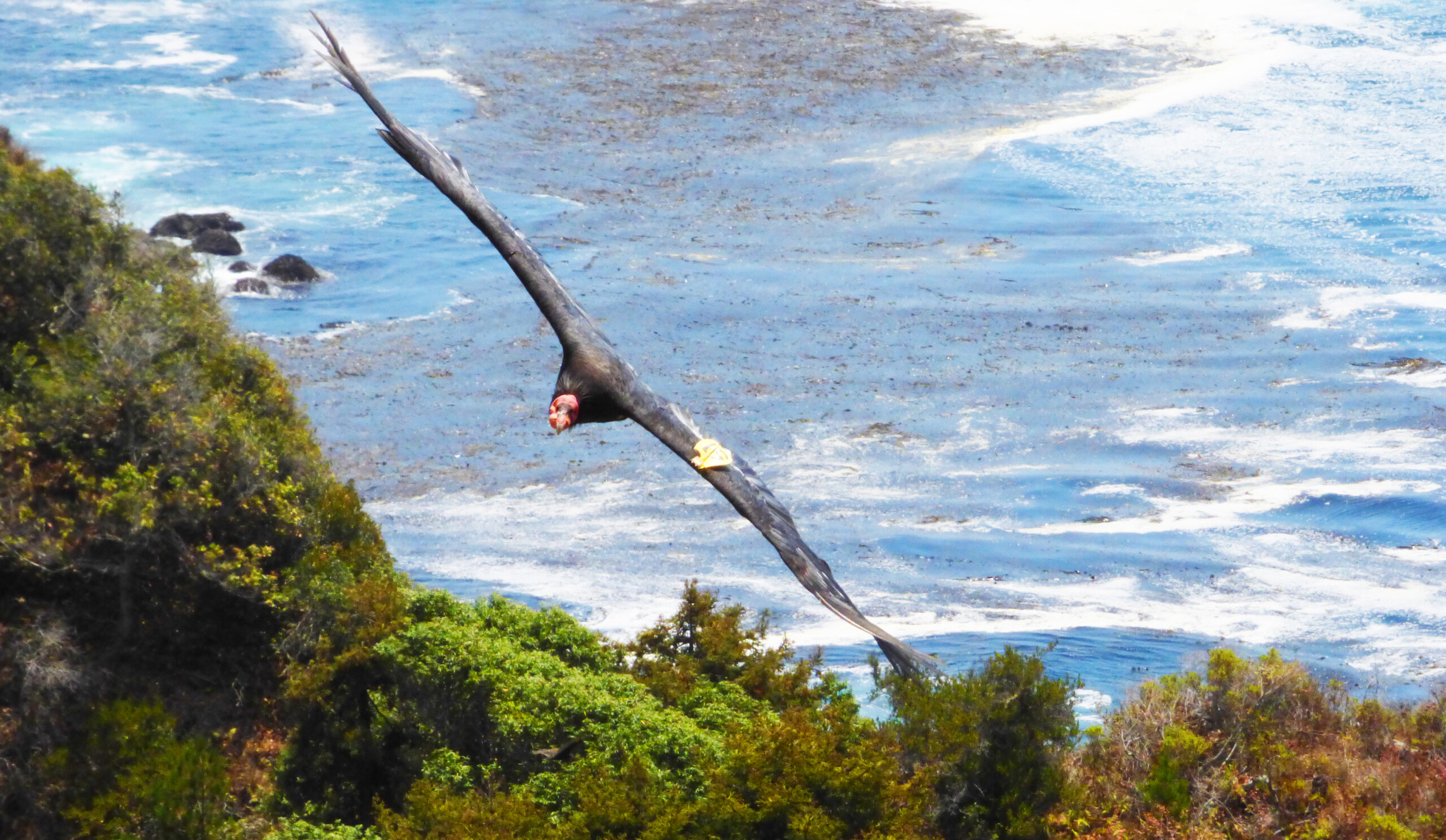 “Over the years, these condors visited the Lick Observatory outside Livermore, surveyed the Tehachapis, and even cruised around the southern terminus of the San Joaquin Valley and north almost to Mt. Whitney!

“This summer, Pinnacles Condor 828 flew farther north in western California than any condor before her since condor release programs began in the 1990s. Over three days, she flew north from Pinnacles National Park and circled around the eastern flanks of Mt. Diablo before returning south to Pinnacles, covering over 100 miles each way!”

Joseph Belli, wildlife biologist who is also involved with the Pinnacles Condor Recovery Program, adds, “This is the third time she’s made a sojourn north this year. She’ll turn six next spring, breeding age . . . I do think her wandering has something to do with checking out that possibility [of settling into a territory].”

California condors were rescued from extinction in the late 20th century, and captive breeding programs have steadily increased population numbers from just 22 individuals. As of 2018, there were nearly 500 California condors, 300 of which fly free. Although they are still considered critically endangered, they have begun to expand their range. 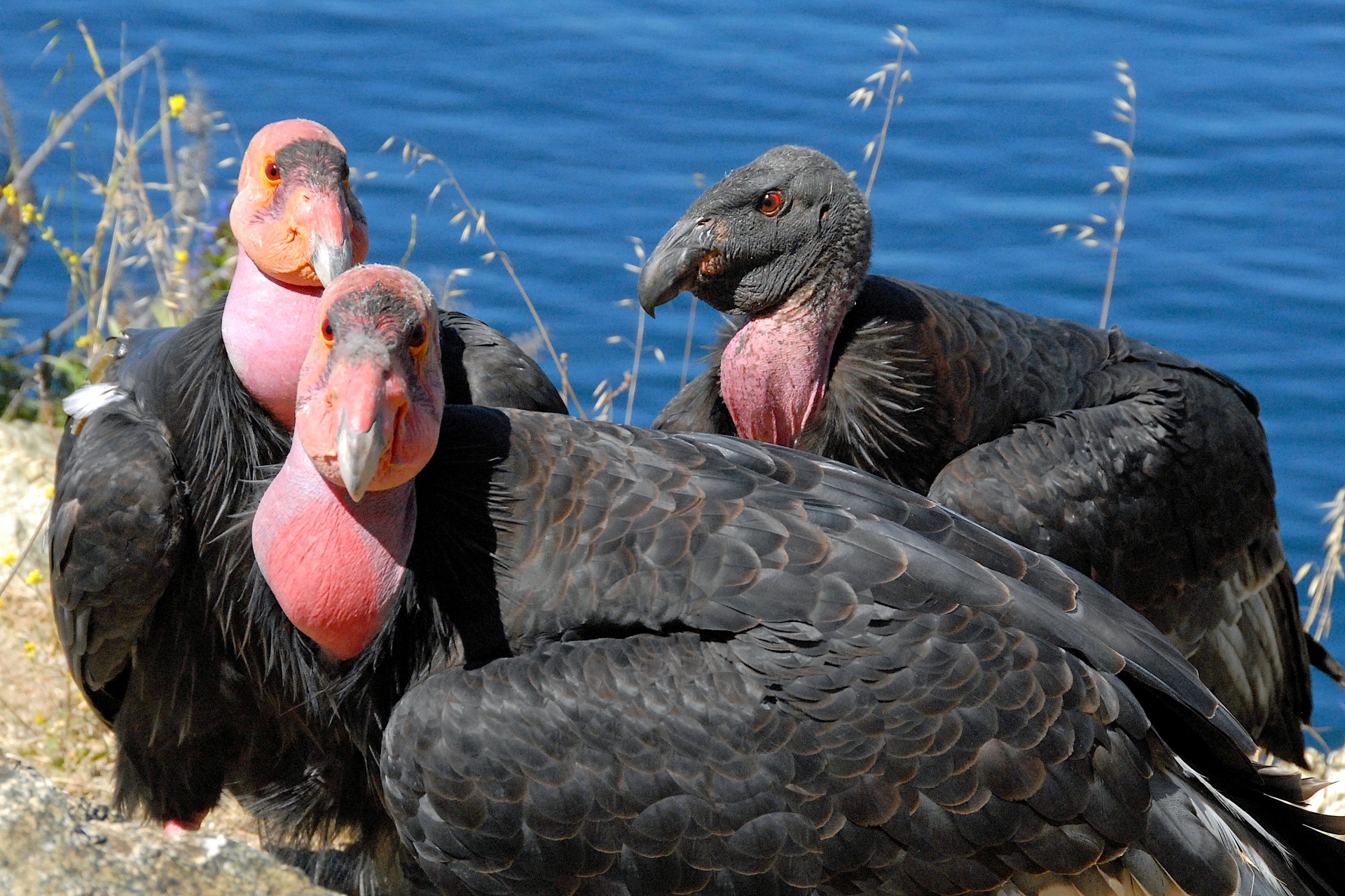 The fact that a California condor has explored as far north as Mount Diablo is very exciting. “Many of us have waited our whole lives for this kind of great news,” says Seth Adams, Save Mount Diablo’s Land Conservation Director.

“For years Save Mount Diablo has been saying that as the California condor population grew that they would end up at the peaks and cliffs around Mount Diablo. The Diablo Range is a mountain lion, golden eagle, California condor wildlife corridor freeway—they all follow major undeveloped open space corridors, and that’s exactly what the Diablo Range is.”

Ted Clement, Executive Director of Save Mount Diablo, adds, “The recent condor activity in the Mount Diablo area is evidence of the importance of conservation and the Diablo Range wildlife habitat corridor.

“Save Mount Diablo recently expanded its area of interest further south into the Diablo Range to ensure that Mount Diablo does not get cut off, due to over-development, from its sustaining Diablo Range amidst the climate crisis.

“Resiliency and connectivity are incredibly important for natural systems like mountain ranges, more so now than ever because of the severity of the climate crisis. By increasing our protection of the north-south Diablo Range corridor, wildlife and plants have a better chance at survival.”

The appearance of Condor 828 near Mount Diablo is a very hopeful and promising sign—and it also means we need better resolution of the conflict between wind energy turbines and birds in the Altamont Pass.

The Trouble with Wind Turbines

Wind turbines in the Altamont have long been recognized as a hazard for birds, including golden eagles, hawks, burrowing owls, and others, because of birds in flight colliding with the spinning blades of the turbines. This holds true for condors as well. 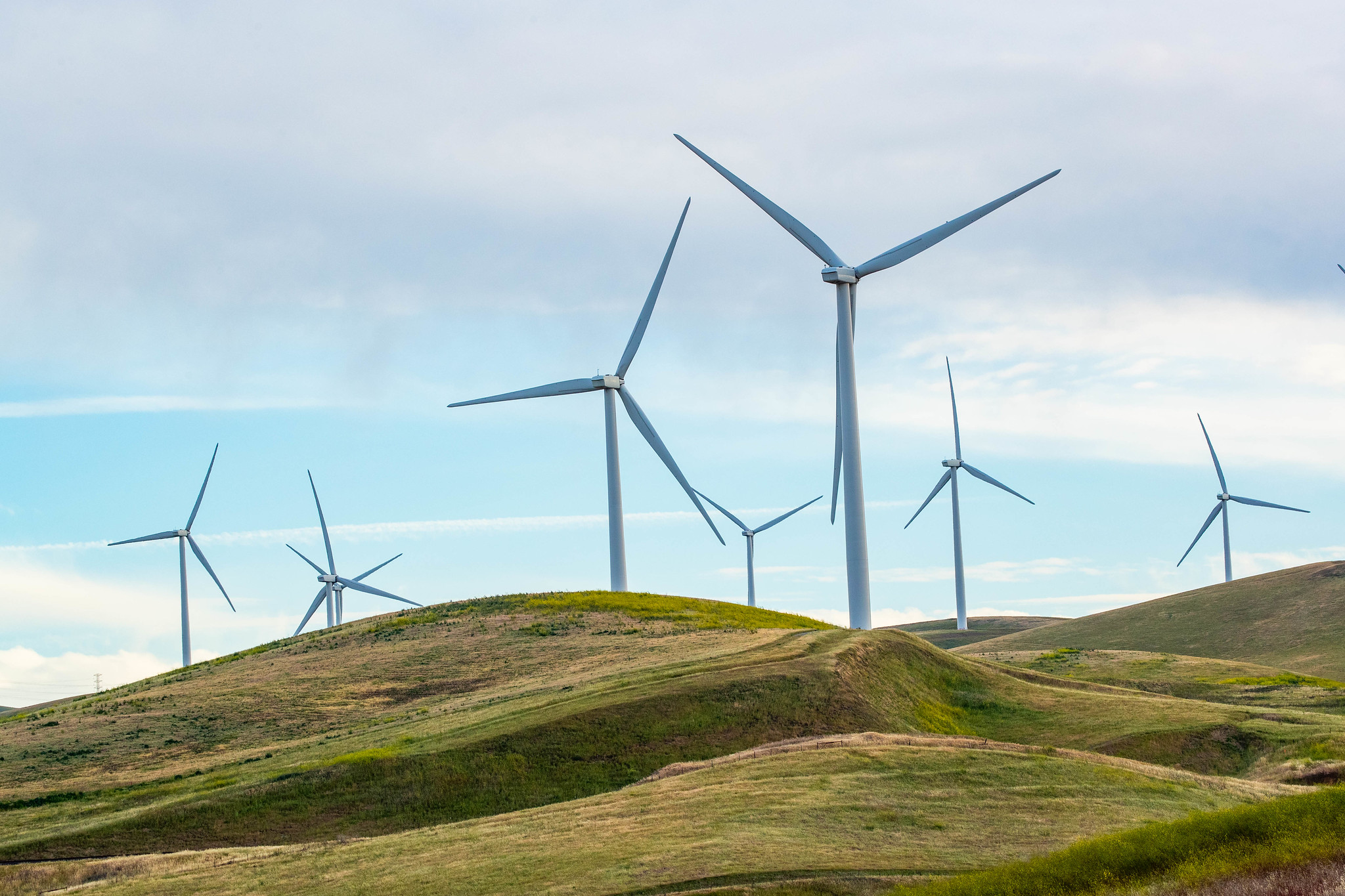 Wind turbines like these at Altamont Pass can pose serious hazards to California condors and other birds. Their impact is determined by the design of the turbine and how it is sited (a good design and good siting can reduce impacts greatly). Photo by Anthony Quintano / CC BY 2.0

An untagged California condor was spotted flying above the proposed Mulqueeney Ranch Wind Repowering Project site, just south of Mount Diablo, about a year ago.

Doug Bell, raptor expert and Wildlife Program Manager at East Bay Regional Parks District, has long been advocating for wildlife and negotiating with stakeholders. Condor 828’s trips around Mount Diablo are reassuring to him:

“Now that a second condor has moved through to Mt. Diablo, we may have a game changer.”

It is crucial to massively and rapidly increase well-sited, properly analyzed renewable energy that avoids, minimizes, and mitigates impacts to wildlife.

The untagged condor, Condor 828, and any others that follow may be a catalyst for renewed action on this issue. We need action, now that there is more recognition that the steps taken over the past decade to reduce bird fatalities haven’t resulted in the benefits that were hoped for.

Looking Back for the Future

To learn more about the historic range of California condors, raptor experts are considering a project to sift through soil at potential former nest sites on Mount Diablo.

The project would search for eggshell fragments. There are still many details to work out before this project can become a reality, but the likelihood that it will turn out some interesting results and history is promising. 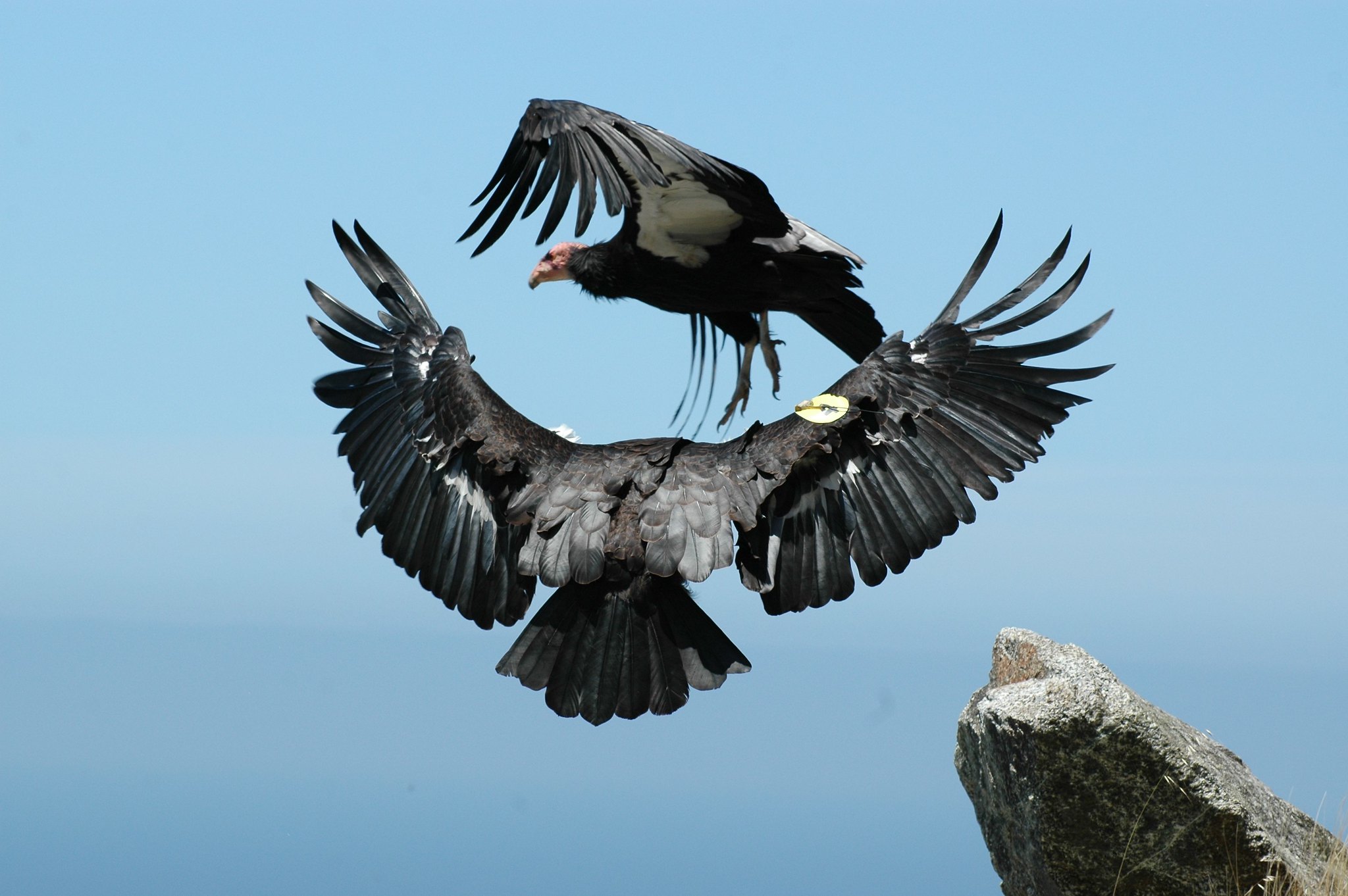 According to environmental planner and Save Mount Diablo Board member Malcolm Sproul, the last official record of a California condor sighting in Contra Costa County was in the early 1850s. They were still abundant then, flying in flocks of 20 or more, though they were rapidly declining in number due to deforestation and poaching.

Sproul suggests that condors possibly roosted in old redwood cavities around Moraga, much like how they do today at Big Sur.

In the future, we look forward to more frequent condor sightings in the Mount Diablo area, and hopefully, we will also one day see the first nesting condors in the East Bay in modern history.

Top photo by Tim Huntington / Condor 828 soaring through the skies