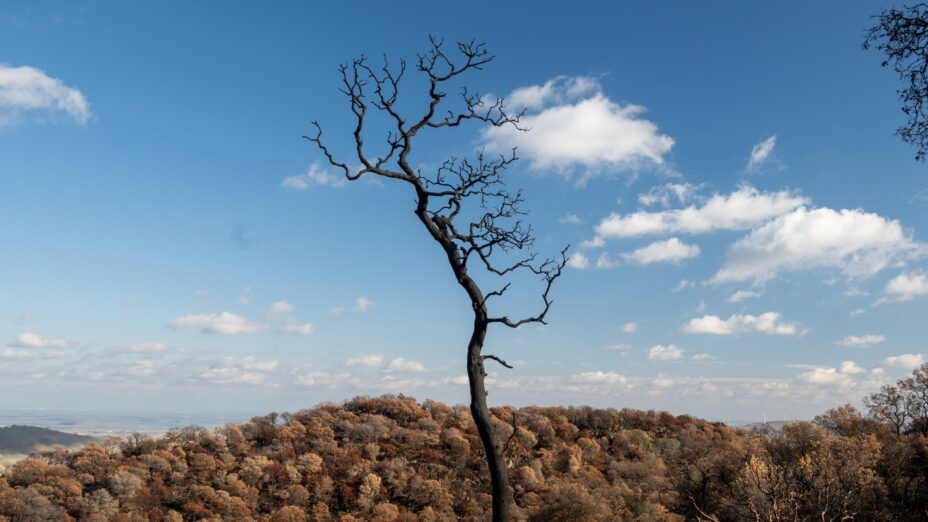 Here’s our first photographic look at the Diablo Range’s recovery since lightning sparked the SCU fire complex last August. You’ve surely noticed that the blazes were followed by a serious drought. As of January 22, San Francisco had less than 30 percent of its normal rainfall. One of the towns near the SCU fire footprint, Livermore, had only 1.84 inches, or 23 percent—not ideal circumstances for plant regeneration.

But the Diablo Range is tough. Grass has (slowly) grown anyway. Shrubs have sprouted from their bases. Seed leaves have peeked out. Bulbs have shot up.

The atmospheric river hitting this week will change the picture. Trees may topple. Pelting rain may send streams of soil and ash down steep slopes. But mostly the rain will be restorative, hastening the range’s recovery (and increasing chances of an extraordinary wildflower display in April and May).

Before all that happens, though, we want to document the verdure produced without the benefit of anything close to normal rainfall. We want to celebrate the range’s grit.

(The photos below were taken between October 17, 2020, and January 23, 2021, in the SCU fire footprint at Morgan Territory Regional Preserve and Los Vaqueros Watershed. Text and photos by Joan Hamilton. Thanks to Heath Bartosh for help with plant identification, but any mistakes are Joan’s. ) 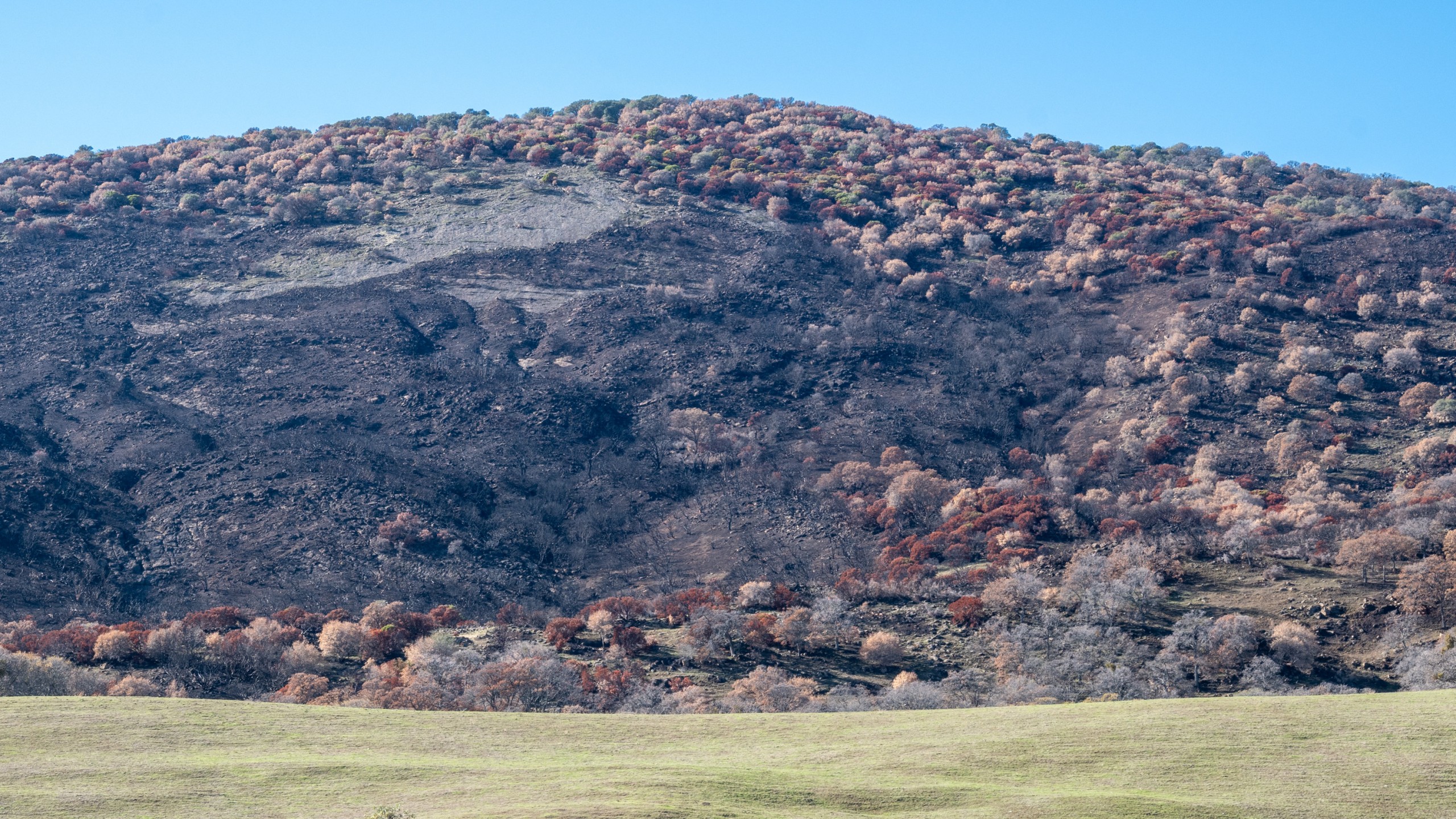 Glancing from afar, a hiker might conclude that the fire devastated the steep east-facing slopes of Los Vaqueros Watershed. After more than four months to recover, they’re still a bleak Halloween scene.

But a walk in the belly of the burn yields more hopeful signs. A bobcat winding through a stand of blue oaks. Two coyotes in the grassland. A prairie falcon

overhead, along with 39 other bird species in and near the burn. Also . . . 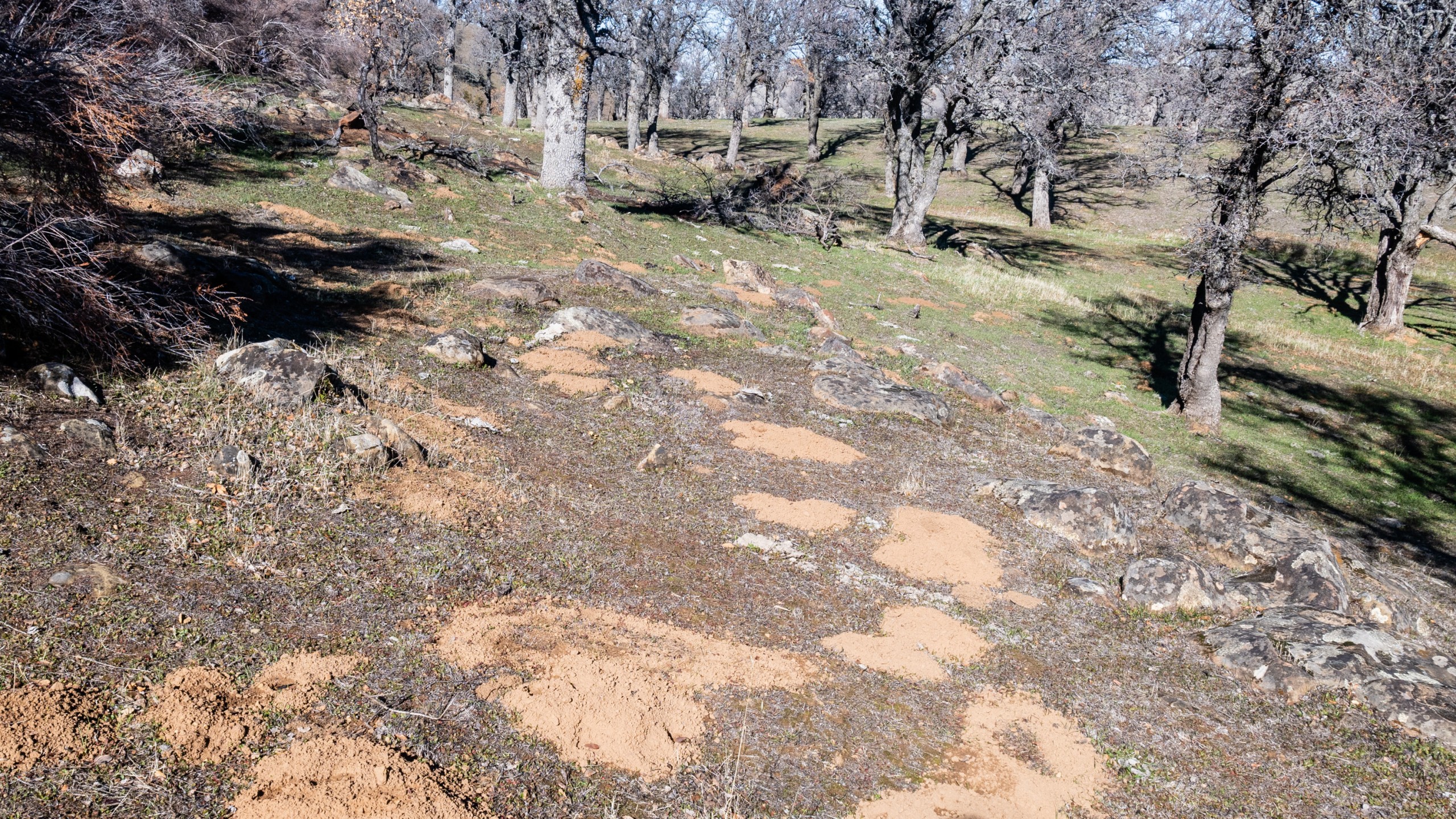 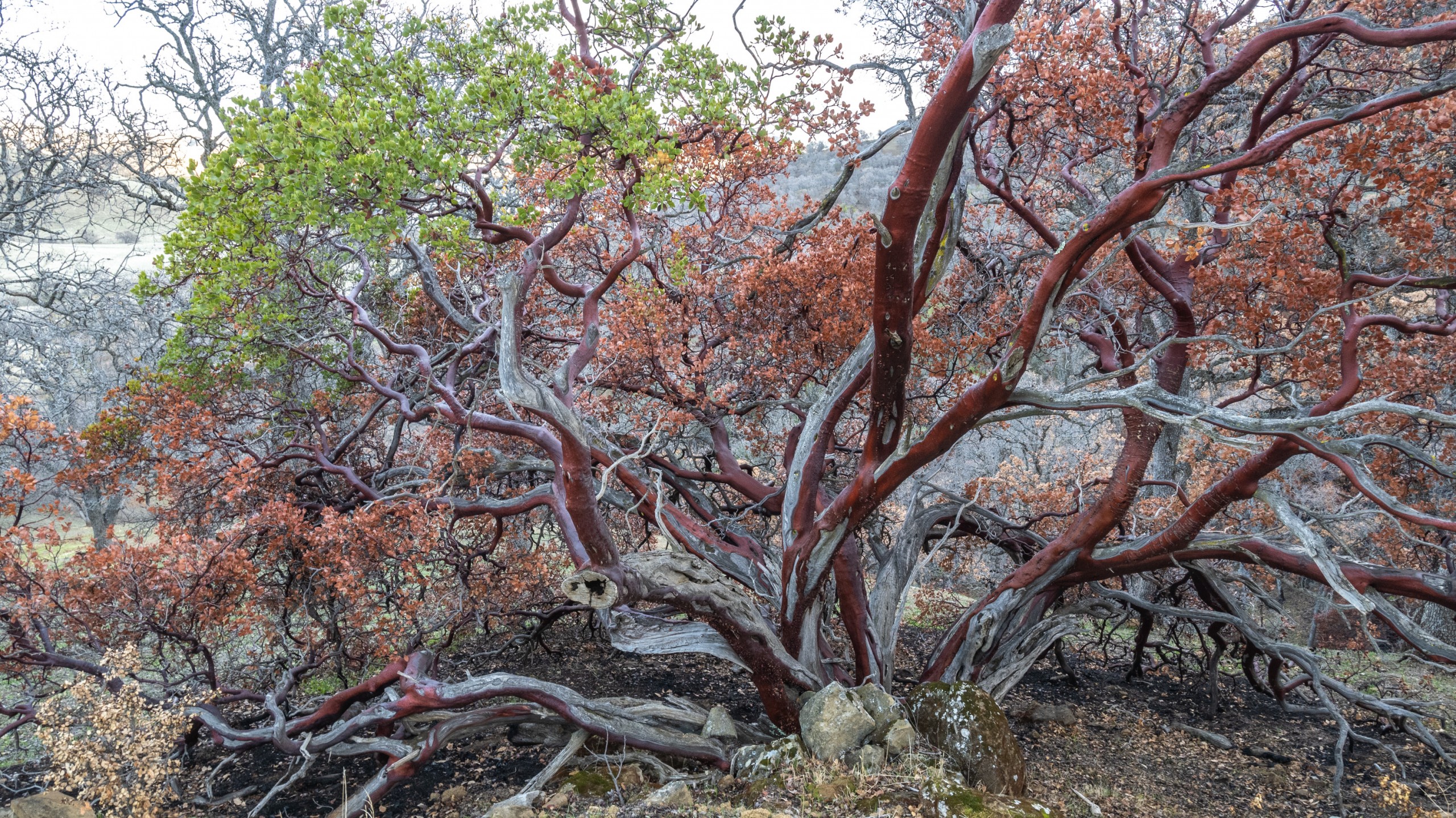 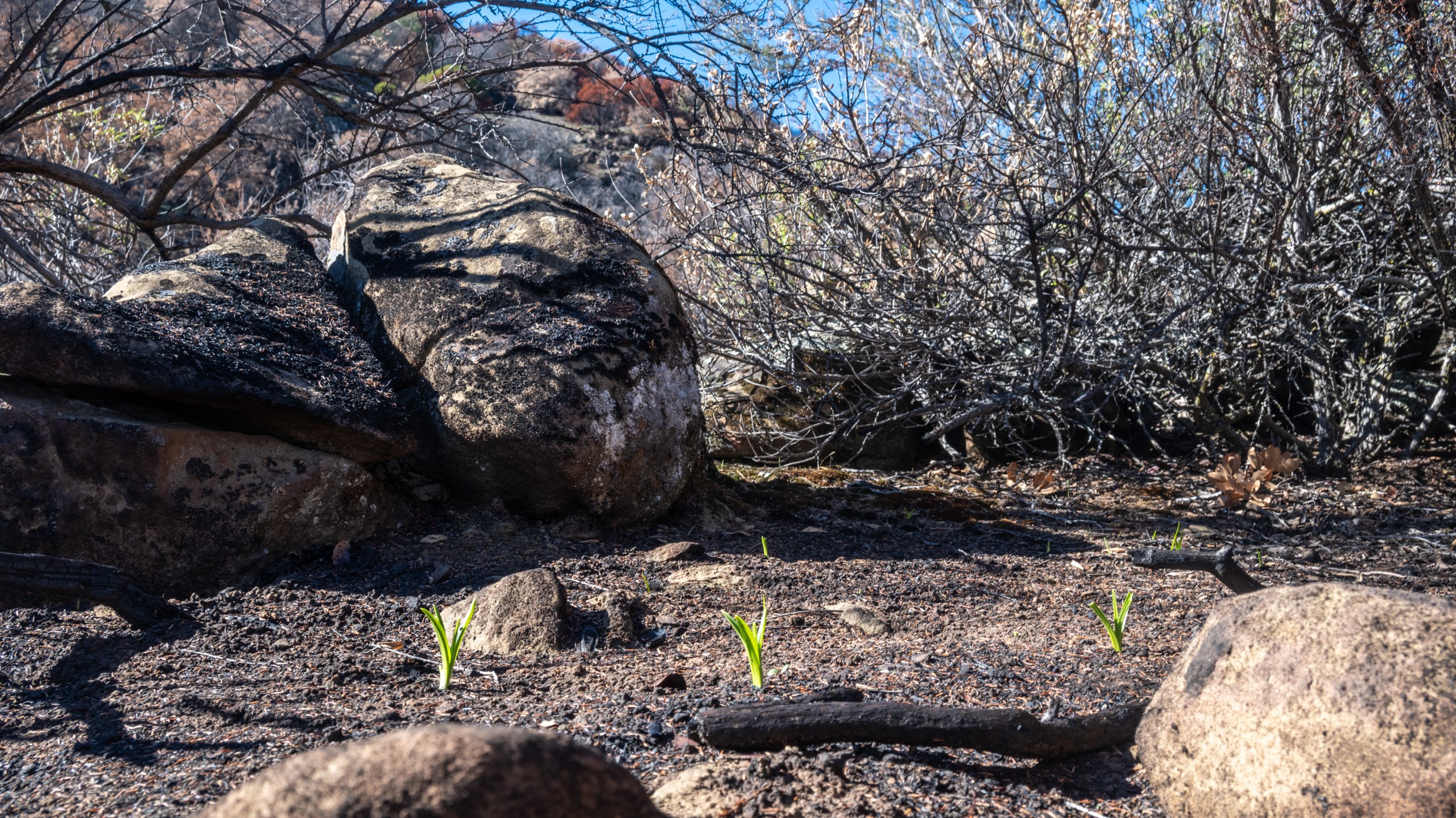 . . . and Fremont’s star lilies rising from the charcoal. 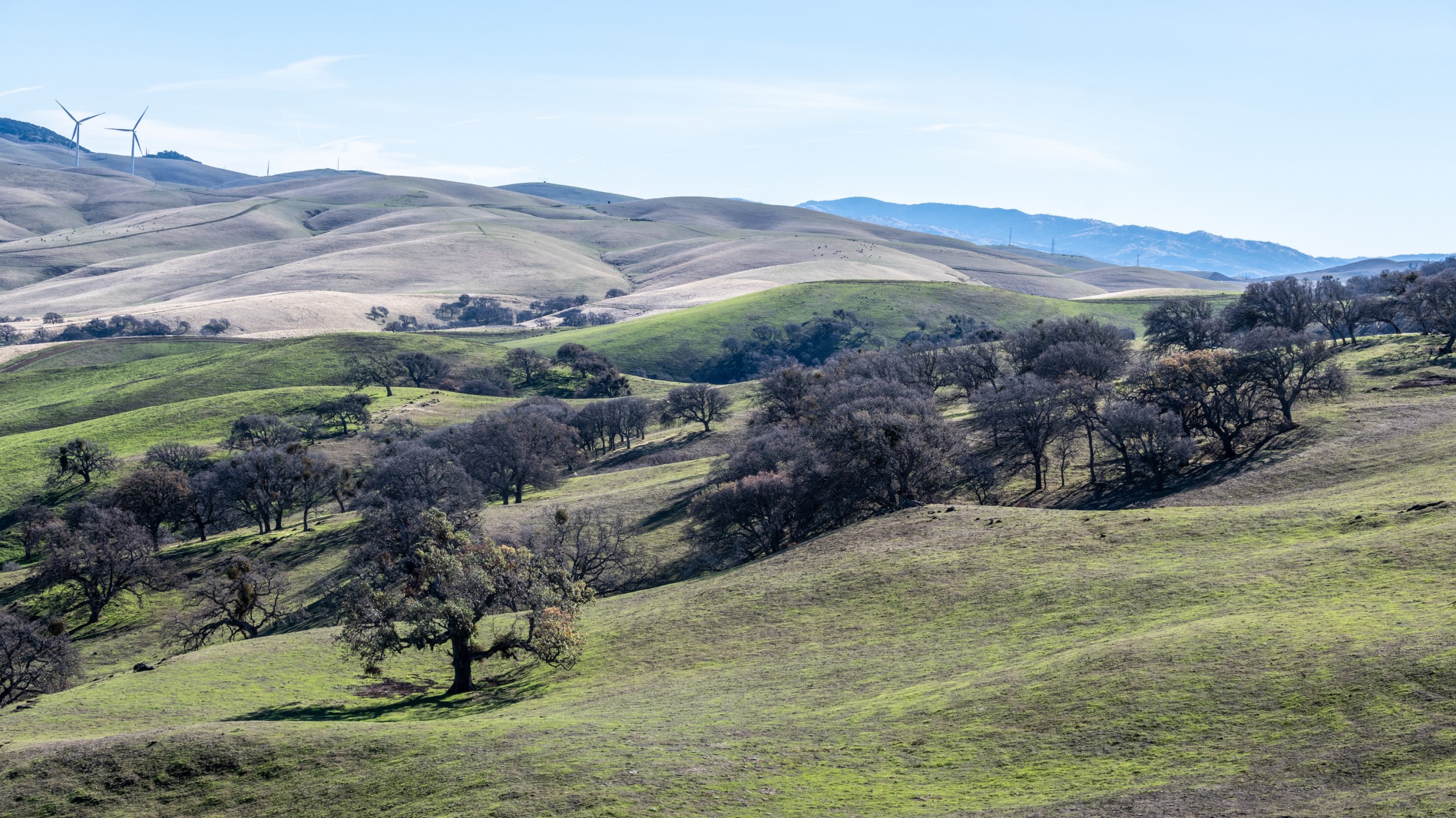 Grasslands in the Los Vaqueros burn are greening up, while unburned grasslands (in the distance) are still brown with thatch.

Morgan Territory Regional Preserve’s steep chaparral slopes are a continuation of those at Los Vaqueros—and they also burned hot, as chaparral slopes tend to do. They haven’t rebounded quickly. 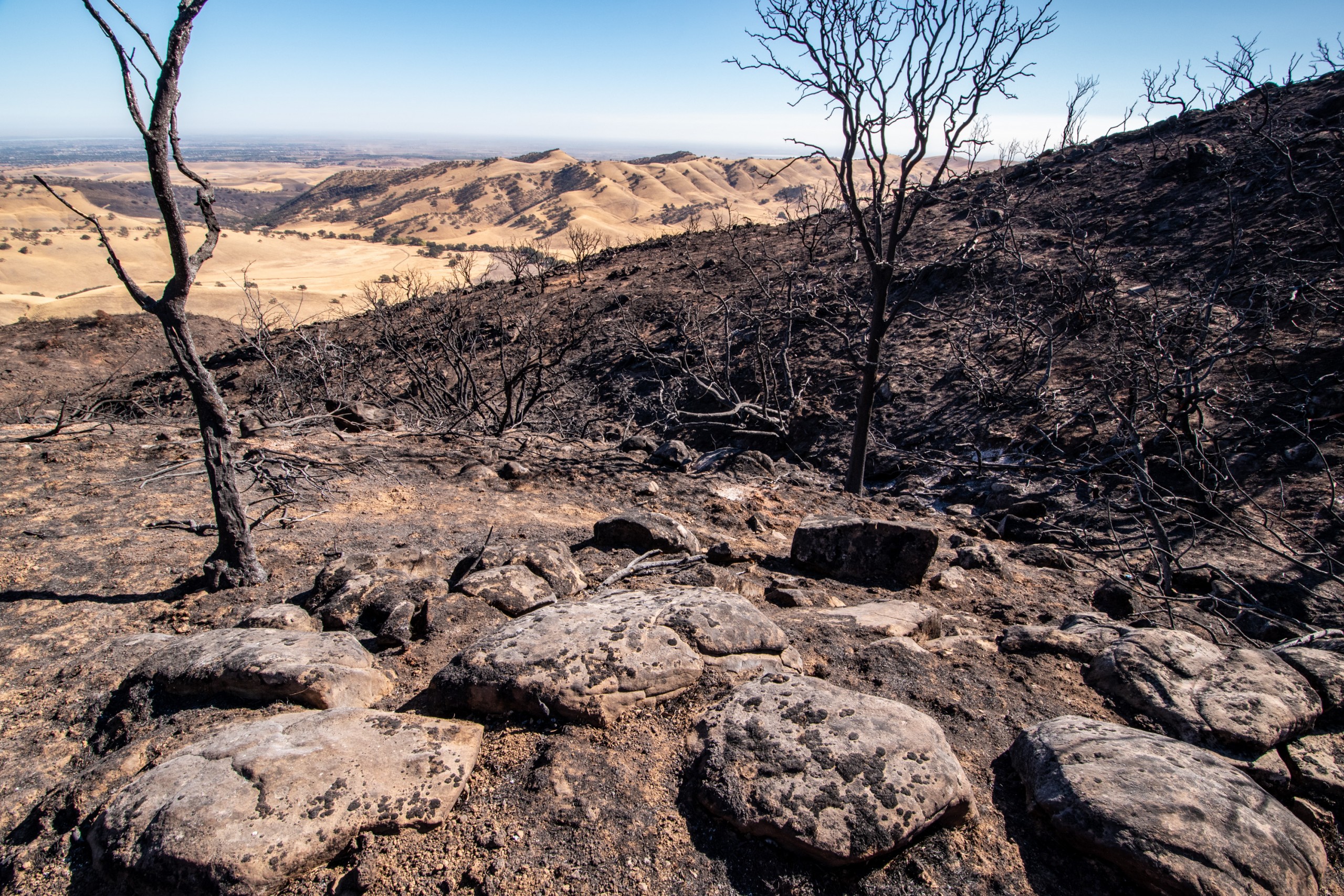 Looking east into Round Valley Regional Preserve across severely burned chaparral in mid-October: a moonscape. 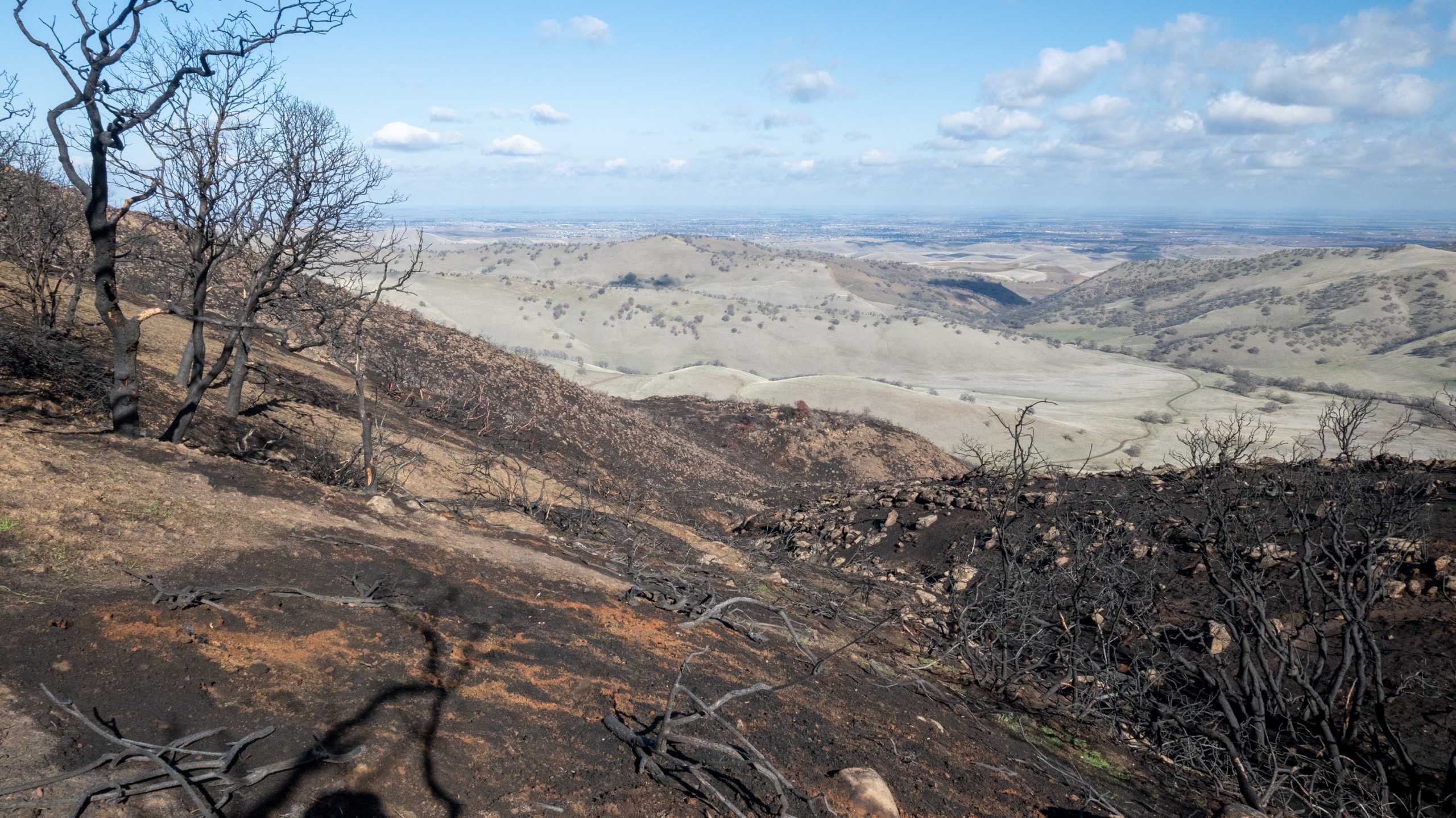 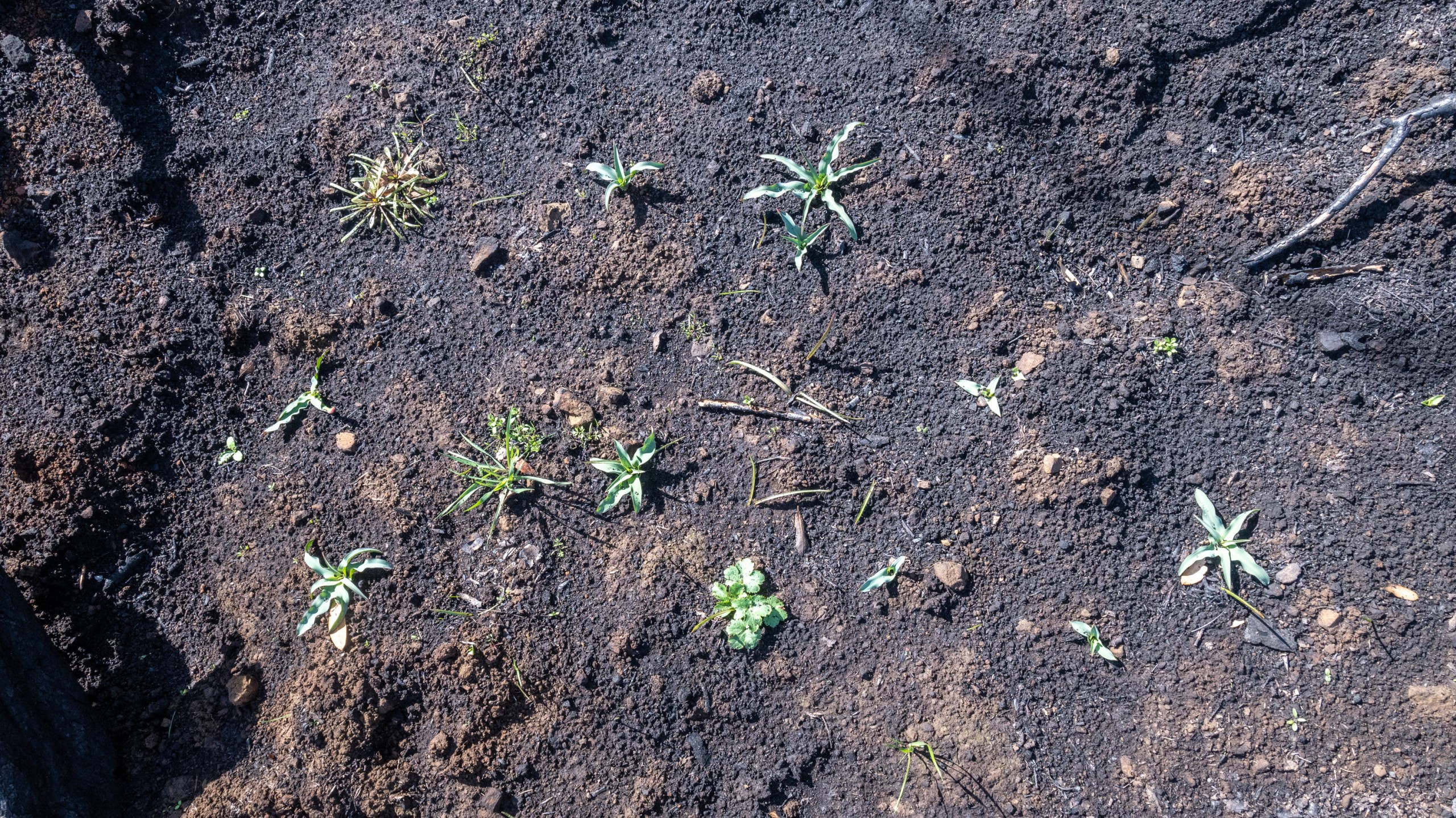 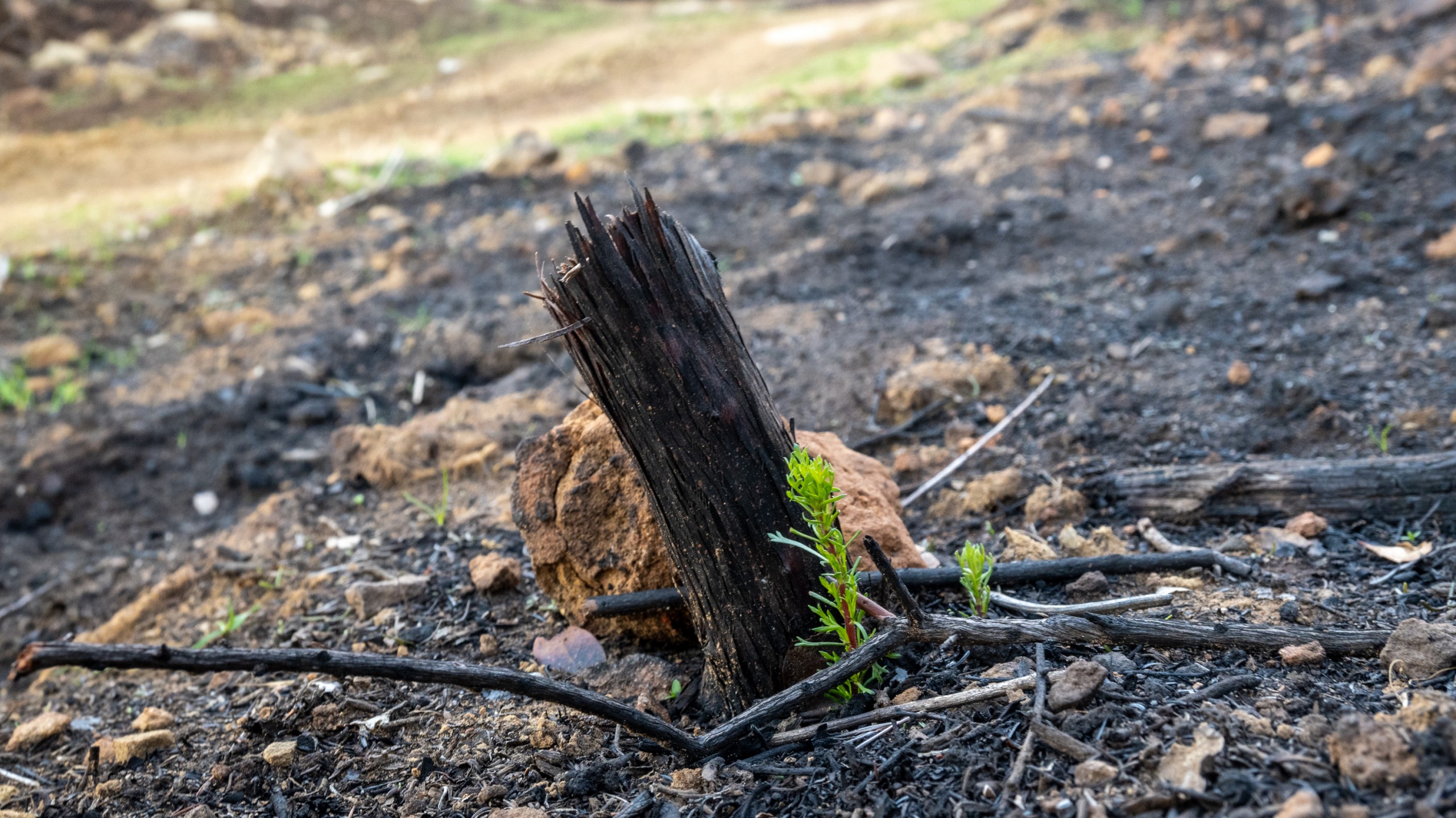 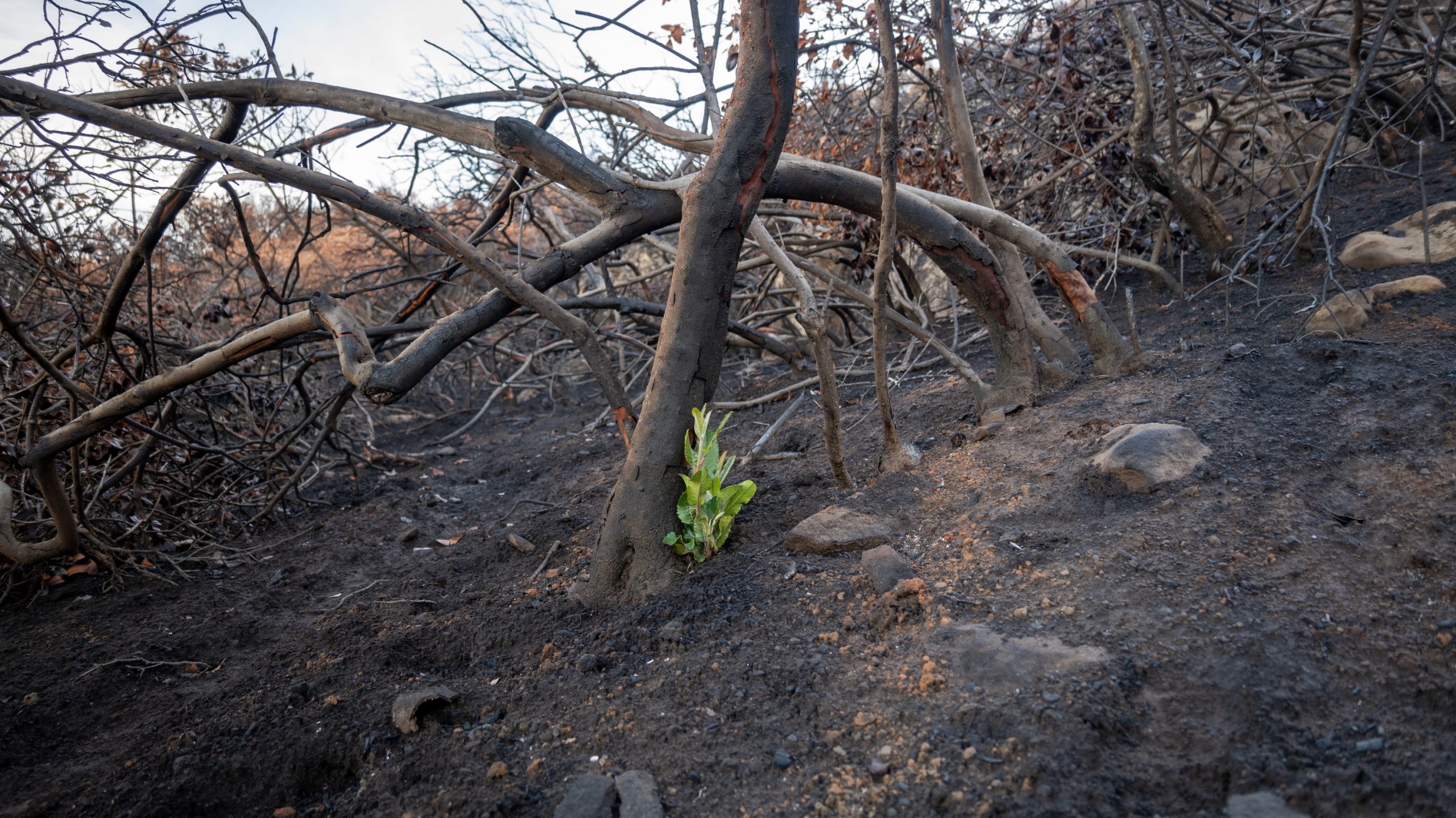 Lower on the slope, chamise and toyon are sprouting from their roots. 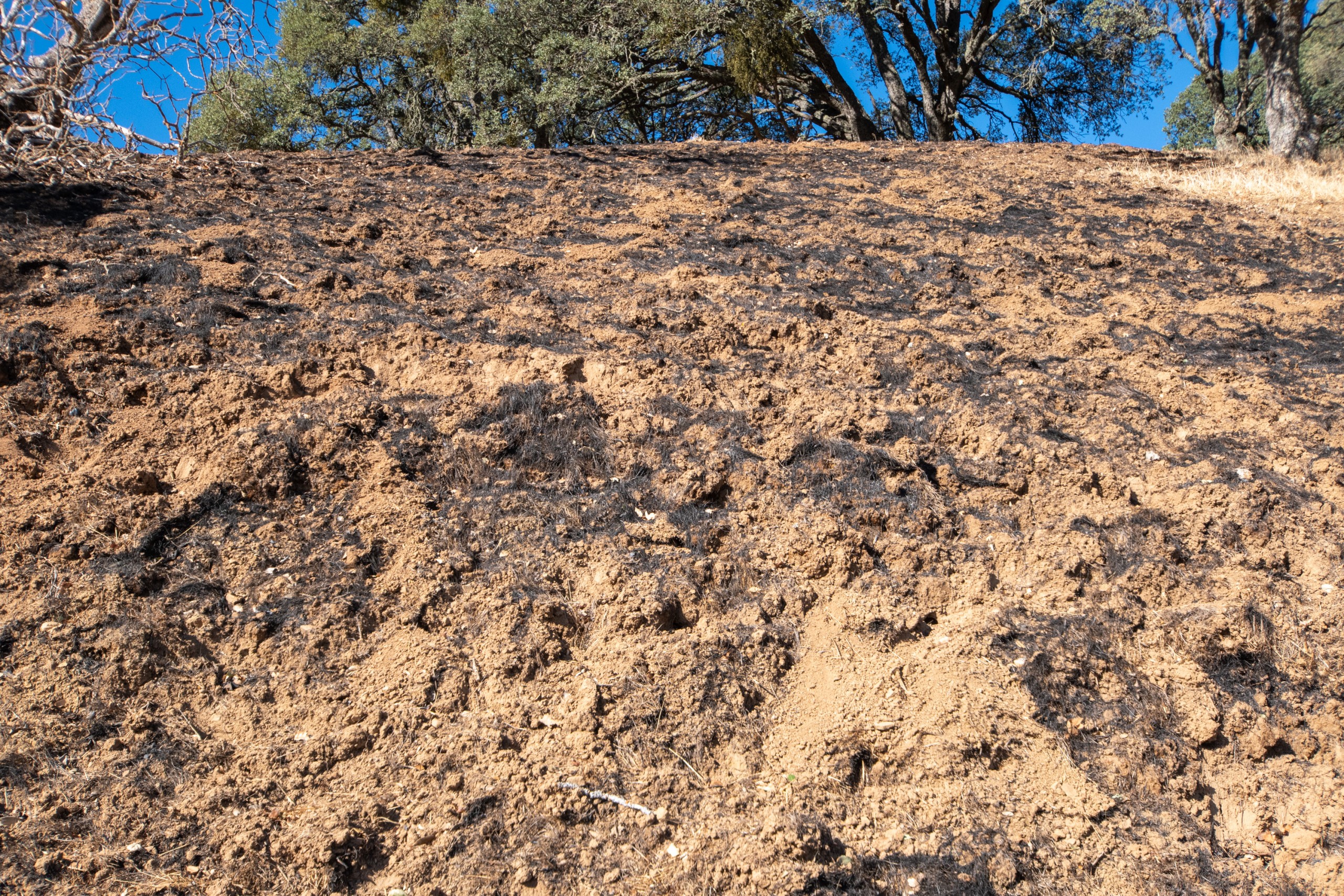 In October, some grassland slopes looked ready to slide in the first big rainstorm. 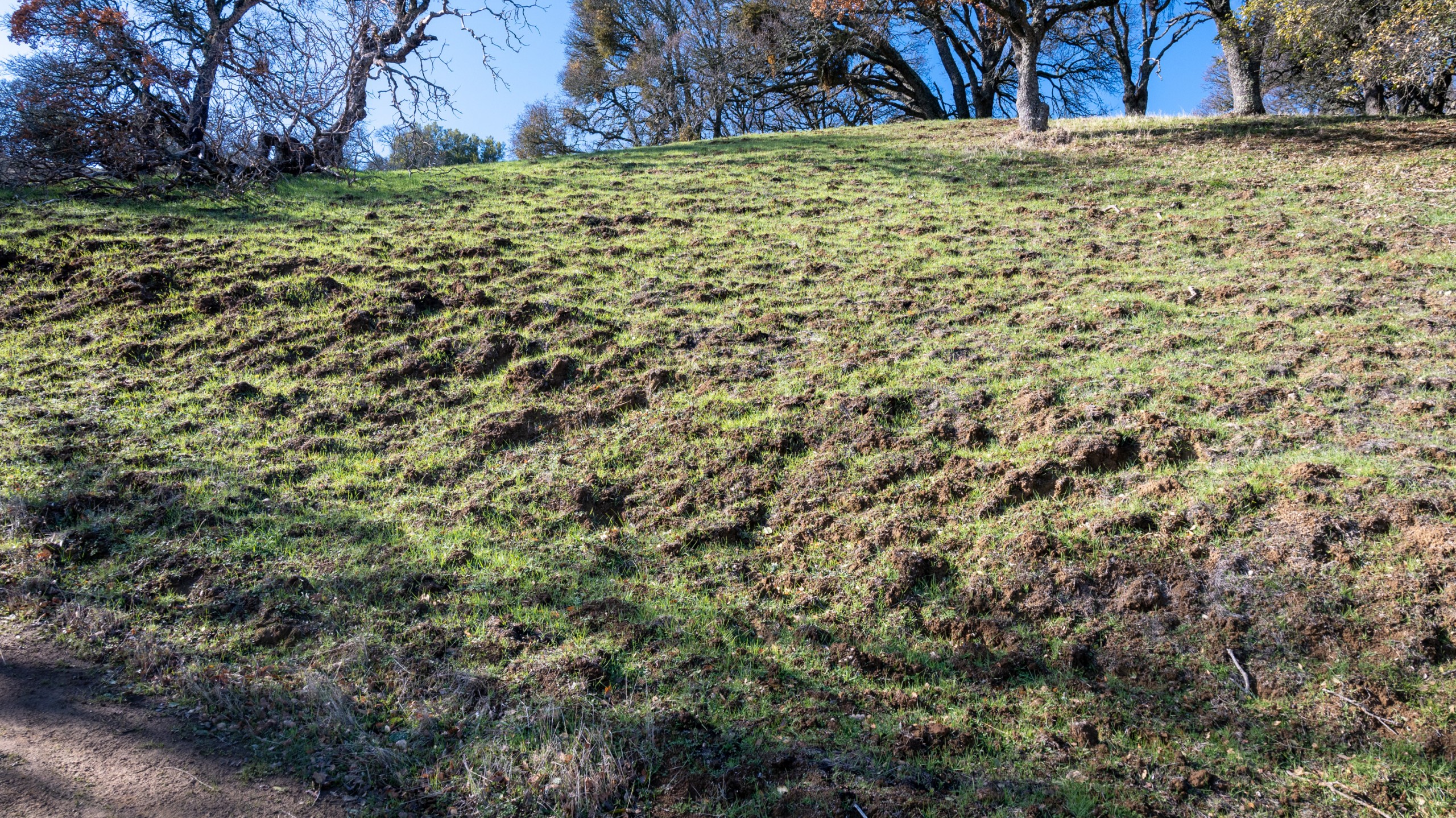 But there were no big rainstorms! By the end of January, this slope had time to put down some roots—possibly a silver lining of the drought. 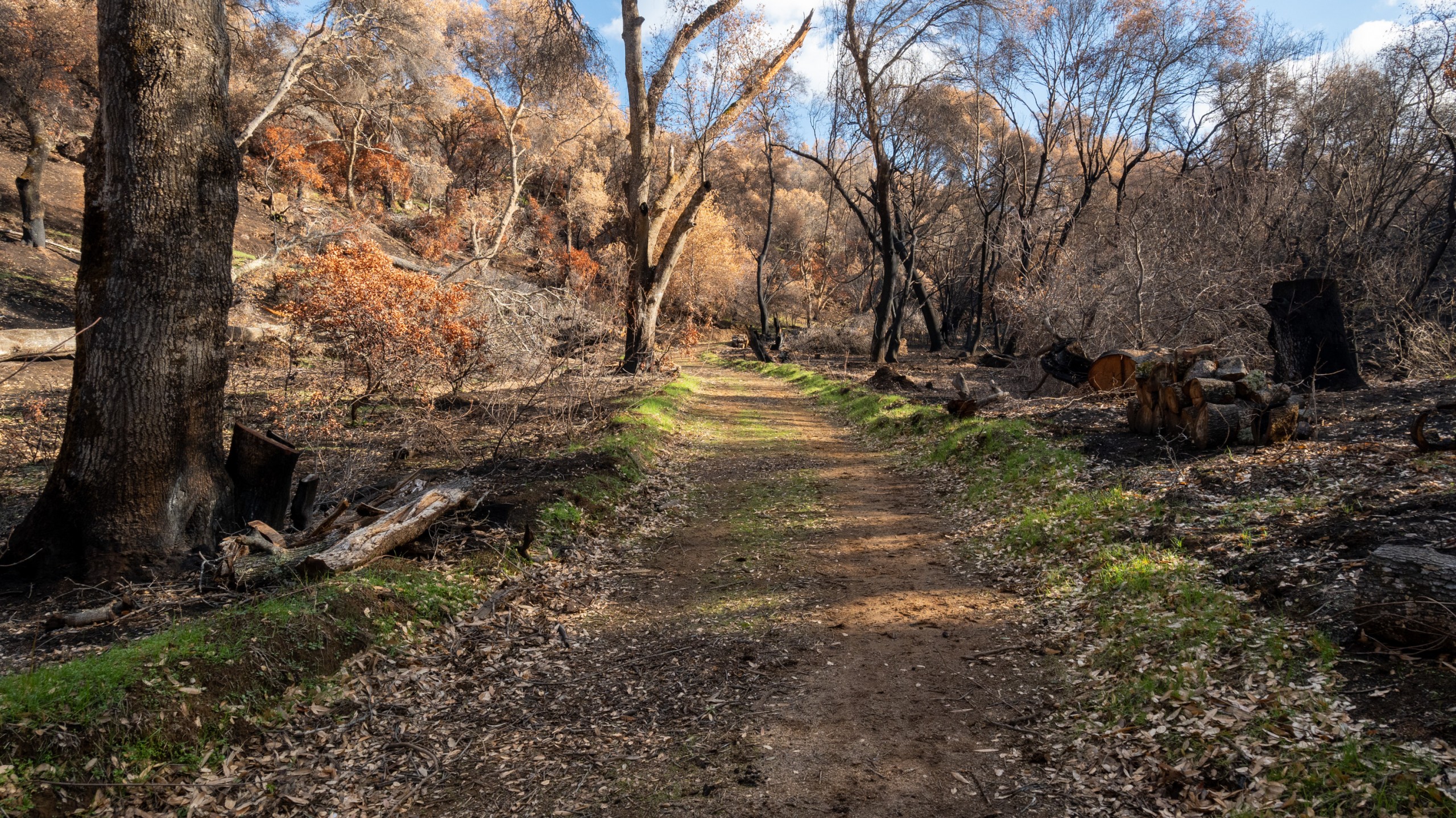 A walk in the woods in January was lush with color . . . 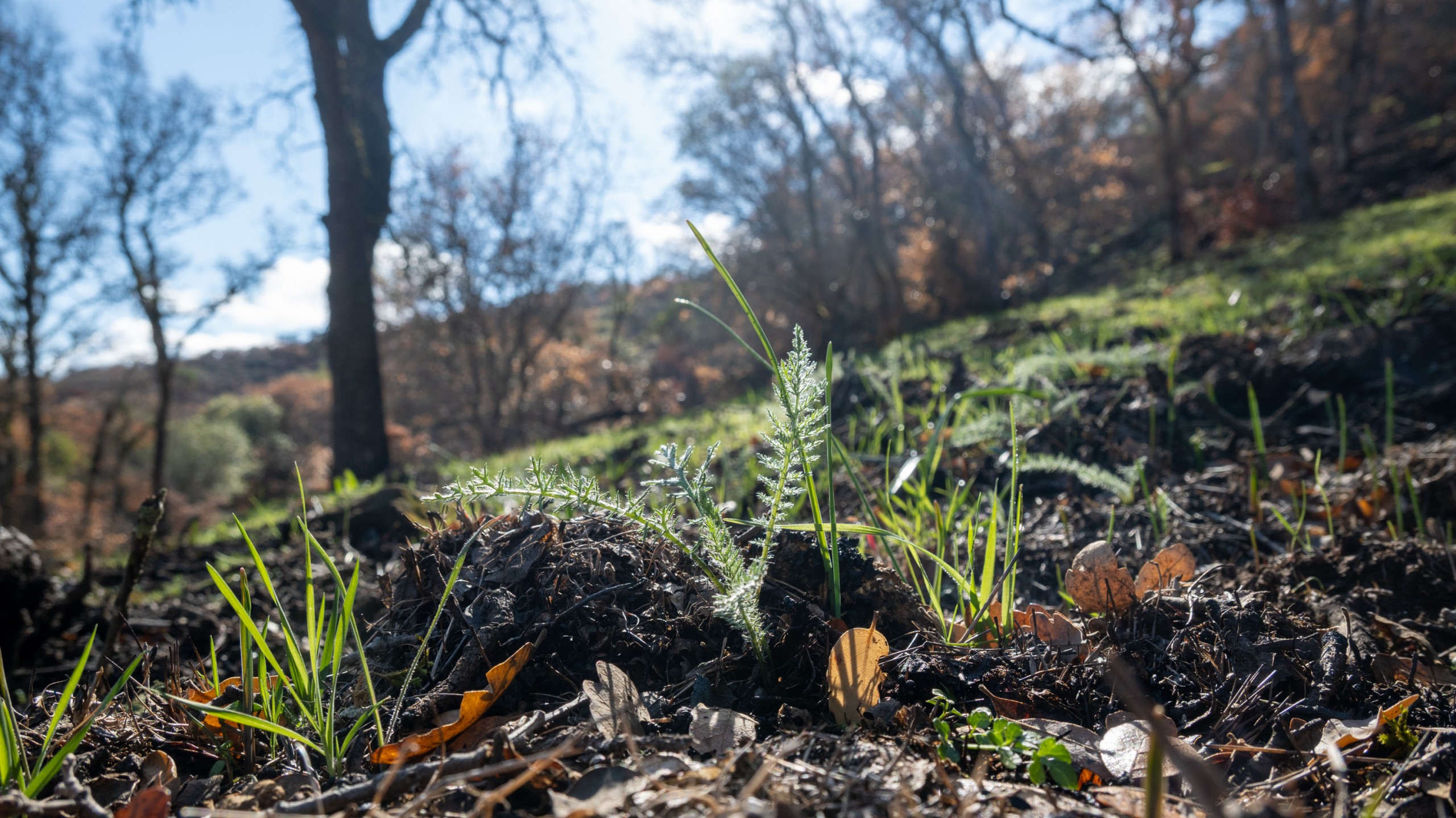 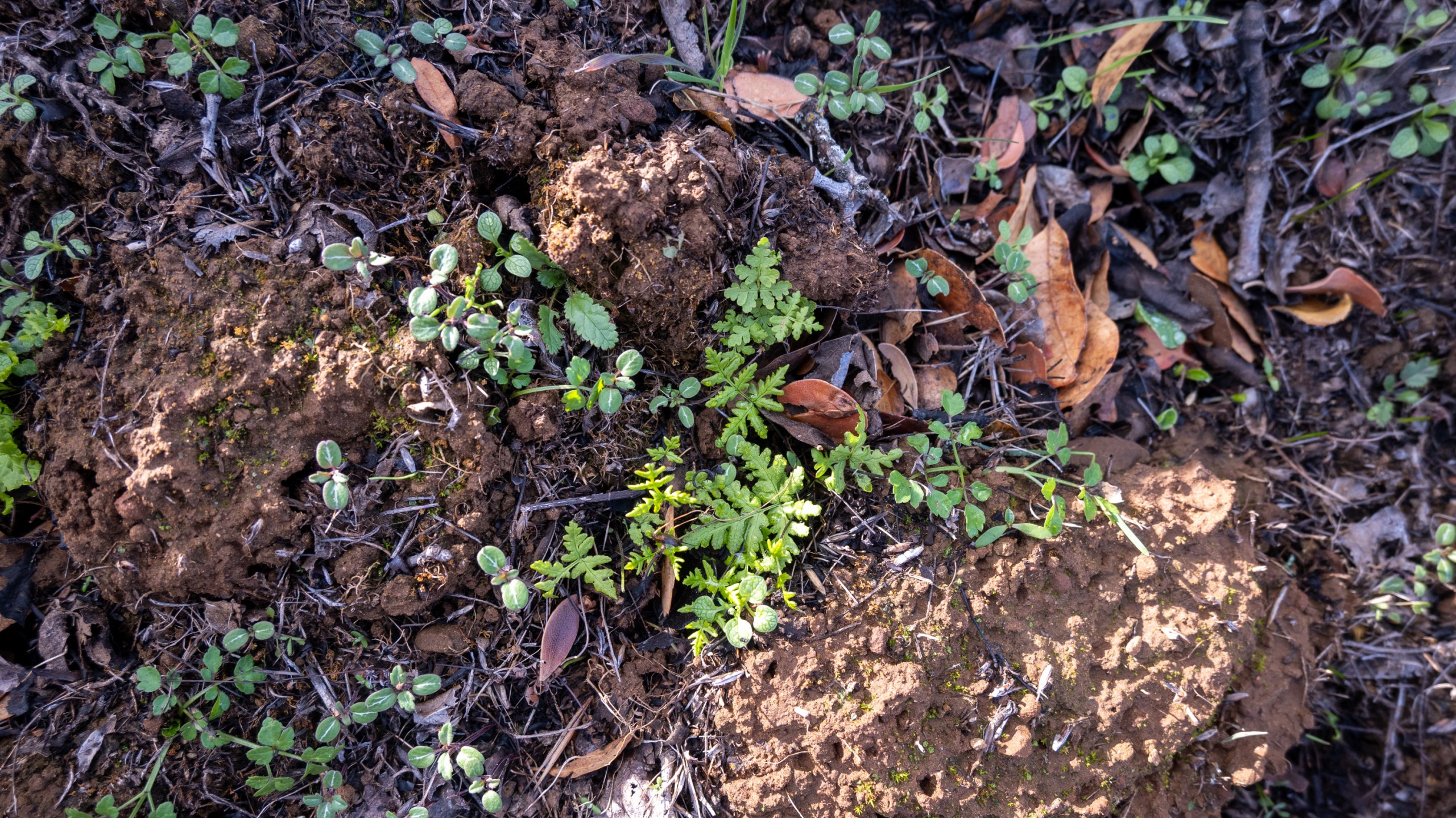 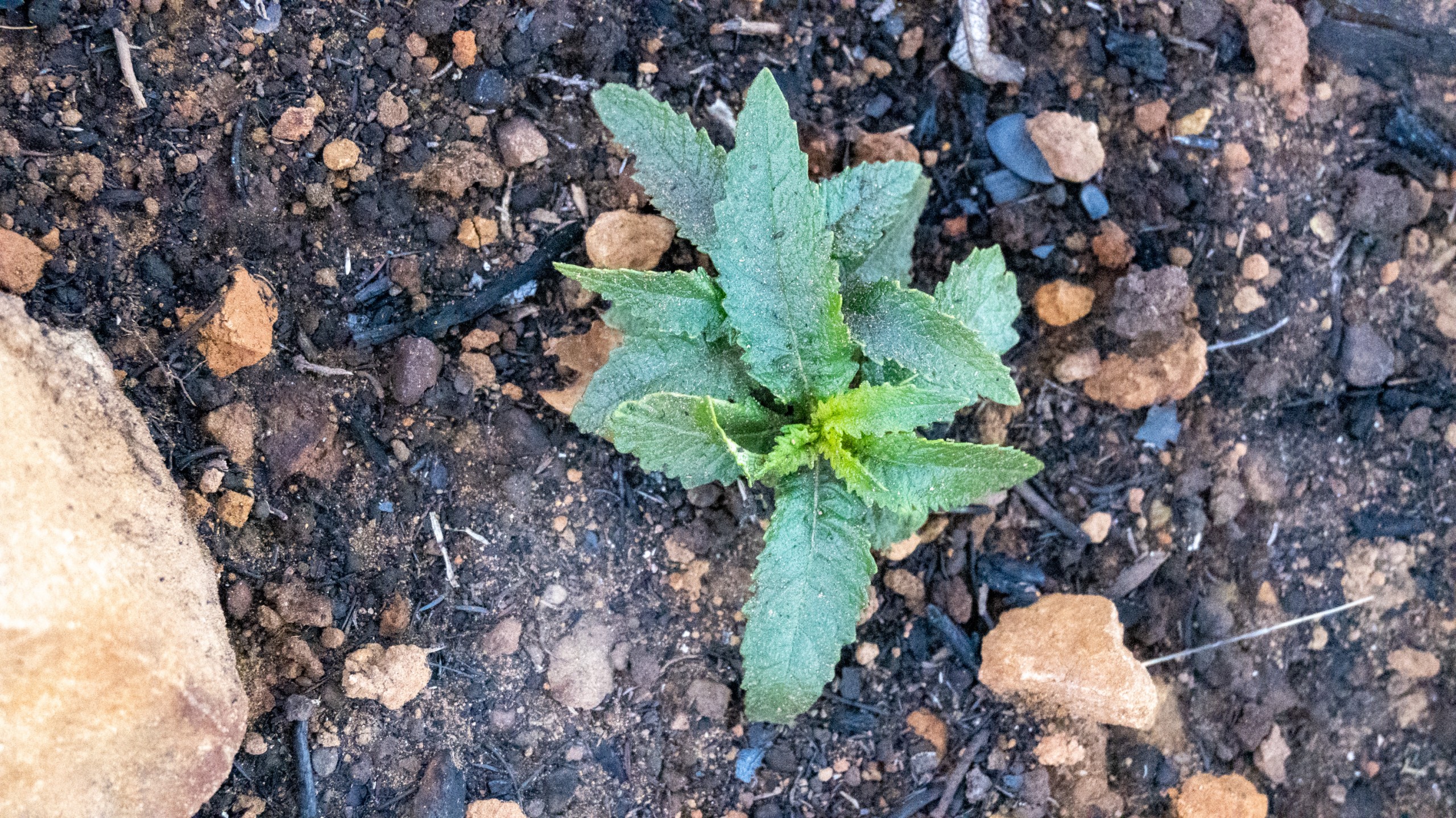 . . . and yerba santa, among many species making tentative comebacks. 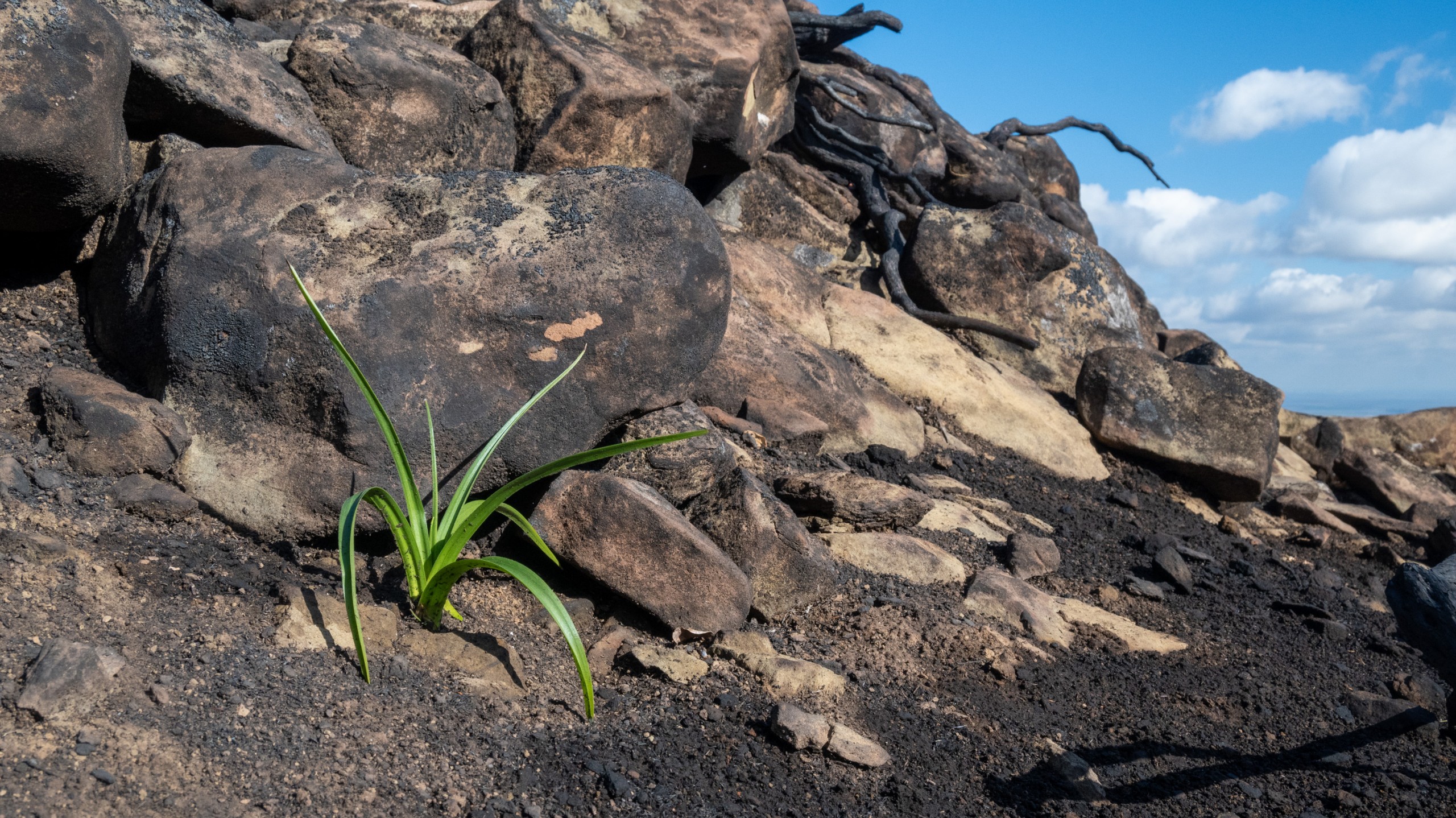 But the champion sprout of all was this Fremont’s star lily nestled in the rocks above the moonscaped chaparral. 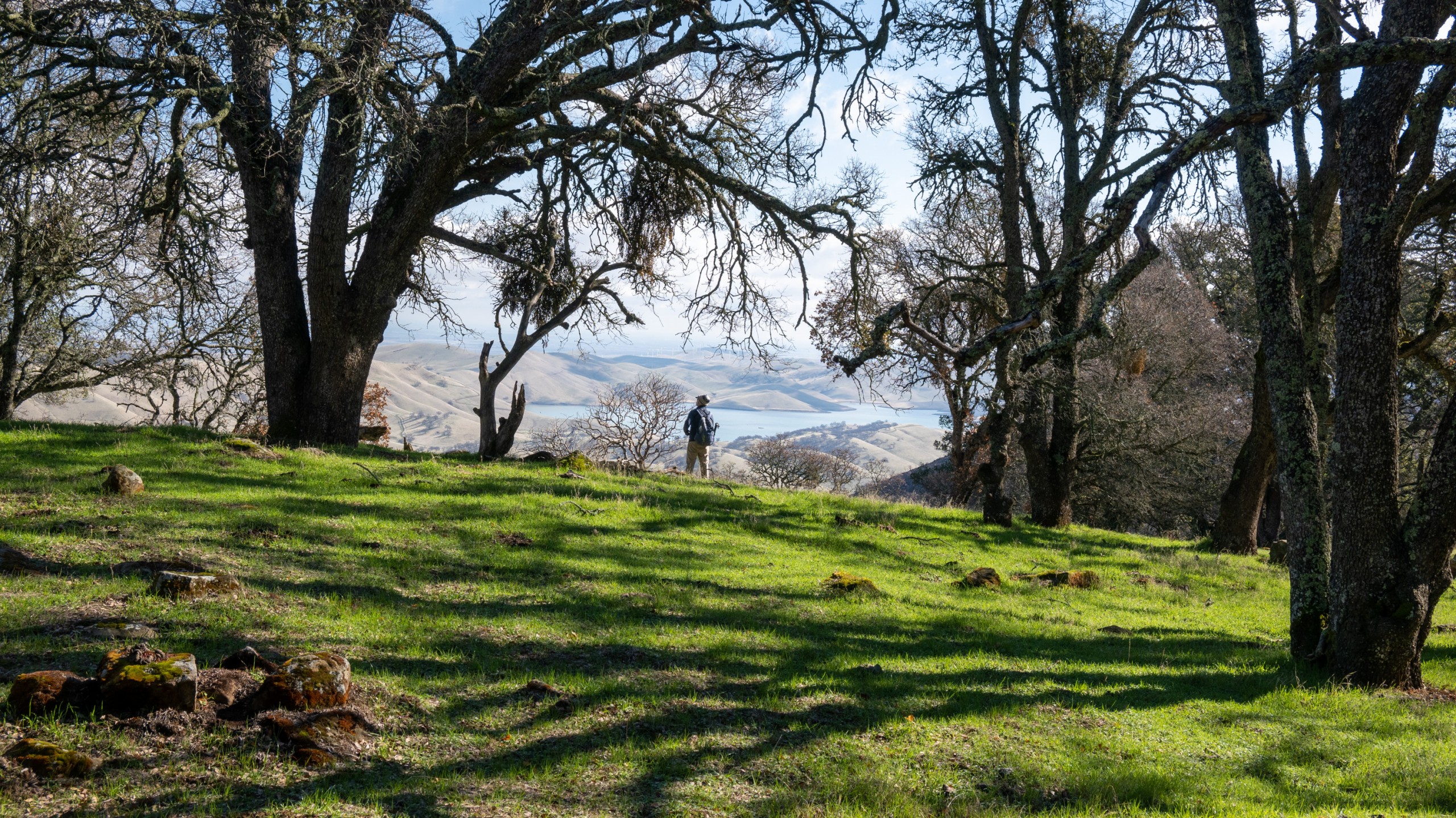 That’s where we (vegetatively) stand before the deluge predicted to come this week. Stay tuned.