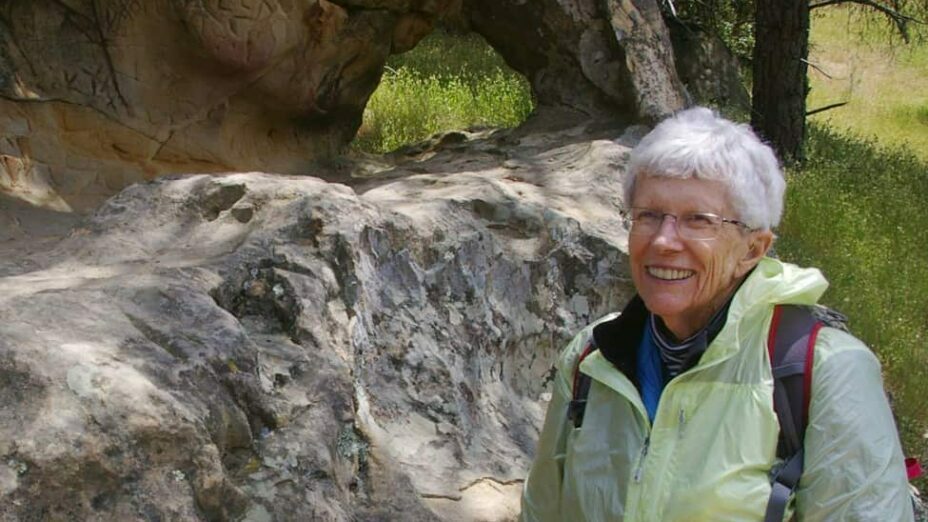 One of our most significant supporters and volunteers, Jeanne Thomas has been a major donor since 1989 and served on our Development Committee from 2006 to 2014.

She’s developed long-term relationships with other volunteers, Save Mount Diablo staff, and the community as she’s worked to spread the word about our work over the decades.

“And then you wake people up to the huge amount of area that is available for development still, and that I think is a real eye-opener.”

Joanne Thomas saw development change the Bay Area from the 1930s to the present day. It shaped her extensive involvement with Save Mount Diablo, as a volunteer, donor, and lover of the outdoors. 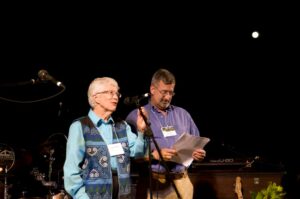 Jeanne Thomas (left) and Seth Adams at our 2008 Moonlight on the Mountain. Photo by Scott Hein

Life and Career in Oakland

Jeanne Thomas was born and raised in Oakland—in a time when it was very different compared to the modern-day Oakland.

“[Lake Merritt] was very pretty. There were no high rises around the lake. It was a very nice town. . . . I lived right across the street from the lake and [Lakeside Park], and I played in the park every day when I was in grammar school.

“Oakland had the regional parks in that day and age. . . . Cities come out to Oakland and say, ‘How did you do it?’ We say, ‘We got started early when the land was available.’

“And once the land is gone, the land is gone, which approaches what Save Mount Diablo says, too. So, people gave the regional parks land during the Depression, because they didn’t want to pay property tax on it anymore.” 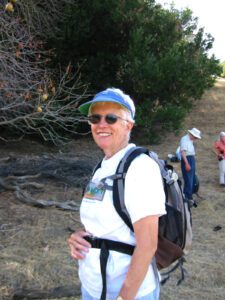 Jeanne attended Mills College in Oakland, where her sister was also getting a degree, before joining the workforce after graduation.

“I was started at trainee secretary. . . . as new people were hired, they worked under me and I trained them. It just sort of grew from there, and it—so eventually I became a manager of employee benefits for the Kaiser Steel Corporation.”

She witnessed the impact that World War II had on Oakland, as it brought in numerous people to work at the shipyards: “. . . all these people moved in, but everyone was, of course, involved in the war effort. But it really was after the war that the ramifications became clear.

“That certainly all these people, now they weren’t employed at the shipyards anymore, and they had this crummy housing that they’d had to live in they’d built for workers during the war.”

Jeanne Thomas was ultimately positive about the future of the city. “Oakland always had a history of segregation and problems, which is unfortunate. But we’re coming out of it well, and it struggled along. . . . I have a great feeling for Oakland.”

“When I moved away in [1969] to [Moraga], I really felt badly about doing it, but I couldn’t find housing that I’d wanted in Oakland. . . . there weren’t too many other opportunities for condos for a single woman. I moved out to Moraga and loved it out there, but I did feel badly about deserting Oakland.”

Early Retirement and Membership in a Women’s Hiking Group

I had my 30 years to get a full retirement. I was only fifty-three, but I was not going to go down there, so I retired.” “Through the years Mount Diablo has been one of our steadiest hiking [areas], numerous hikes in the area on Mount Diablo. There are so many trails there. When you look at the map of what’s there, there’s lots of different habitats and interesting trails.

“The fun thing about hiking . . . season to season, there will be a certain flower that’s all over the place. And then the next year it won’t be up there at all practically, and another flower will take over. . . . You never know what’s going to be the predominant flowers sometimes in the whole area.”

Building Relationships in Rossmoor and Beyond

“I didn’t have a big house, I didn’t have the moneyed friends or the business friends. And I thought that’s what you need on a Development Committee, and that’s what gave me the idea about being the liaison with Rossmoor. . . . I think my thing was, really, was Rossmoor.”

Jeanne would eventually leave the Development Committee to focus more on her outreach work in Rossmoor, hosting regular functions for senior citizens where they would learn about Save Mount Diablo’s work.

She recruited Rossmoor’s retired residents into our volunteering programs, particularly with our stewardship team. “There’s a lot more room for volunteering now under the new programs that we have that we haven’t had before. . . . I’d love to have done that in my younger days, my late 70s or early 80s.” 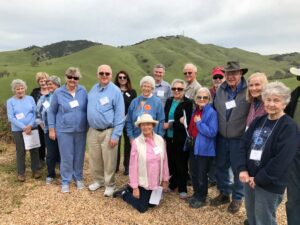 Jeanne Thomas and her Rossmoor Group in 2017

Donating to Save Mount Diablo

Joanne Thomas was raised to be philanthropic, even when she and her family didn’t have much money.

“They [her parents] didn’t have much money in the Depression, but they always managed to give every year to the Community Chest, the United Crusade predecessor, and the church, and that was always very definite. . . .

“My grandfather sent me a dime allowance, and I gave [part] to the church. I did more than tithe, I gave half of it to the church. But no, that was always a lesson to me.”

Jeanne Thomas would carry her values through her entire life, frequently donating to organizations that she believed in.

In the 1980s she learned about Save Mount Diablo’s work through a family friend, initially giving memorial gifts, with her contributions growing from there. 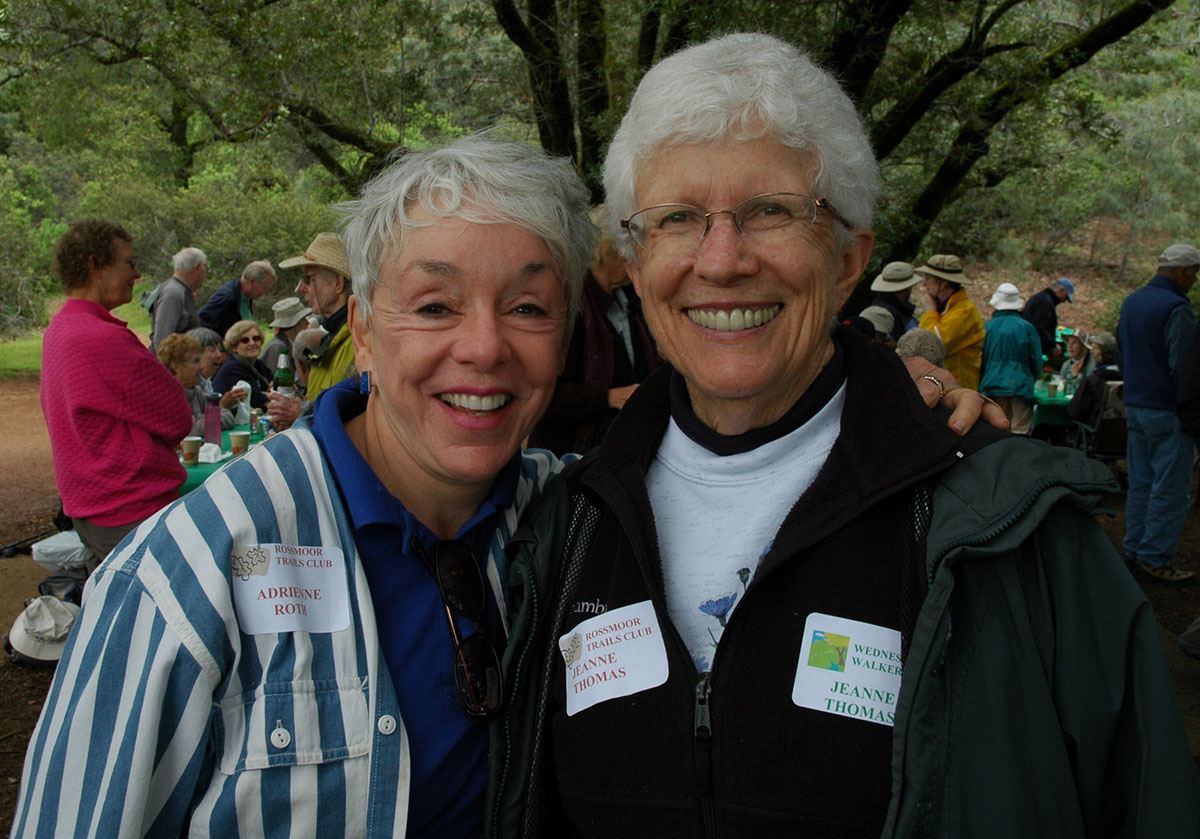 “When you’re working for Save Mount Diablo or when you go to a function. . . . It’s interesting. There’s just something about it that you just—that makes it a joy to work with the organization.”

When asked about her predictions for the next 50 years, she emphasizes the importance of education.

“You’re always going to have another generation coming along, and more enticing video games or something to keep people inside, but I think the education is endless.

“And we’ll have to do more, I’m sure, by that time, to save animals, to keep animals and species going. It’s scary. God only knows what the global warming will do, and maybe an organization like Save Mount Diablo could help fight some of the problems with global warming. Someone’s got to do it.” 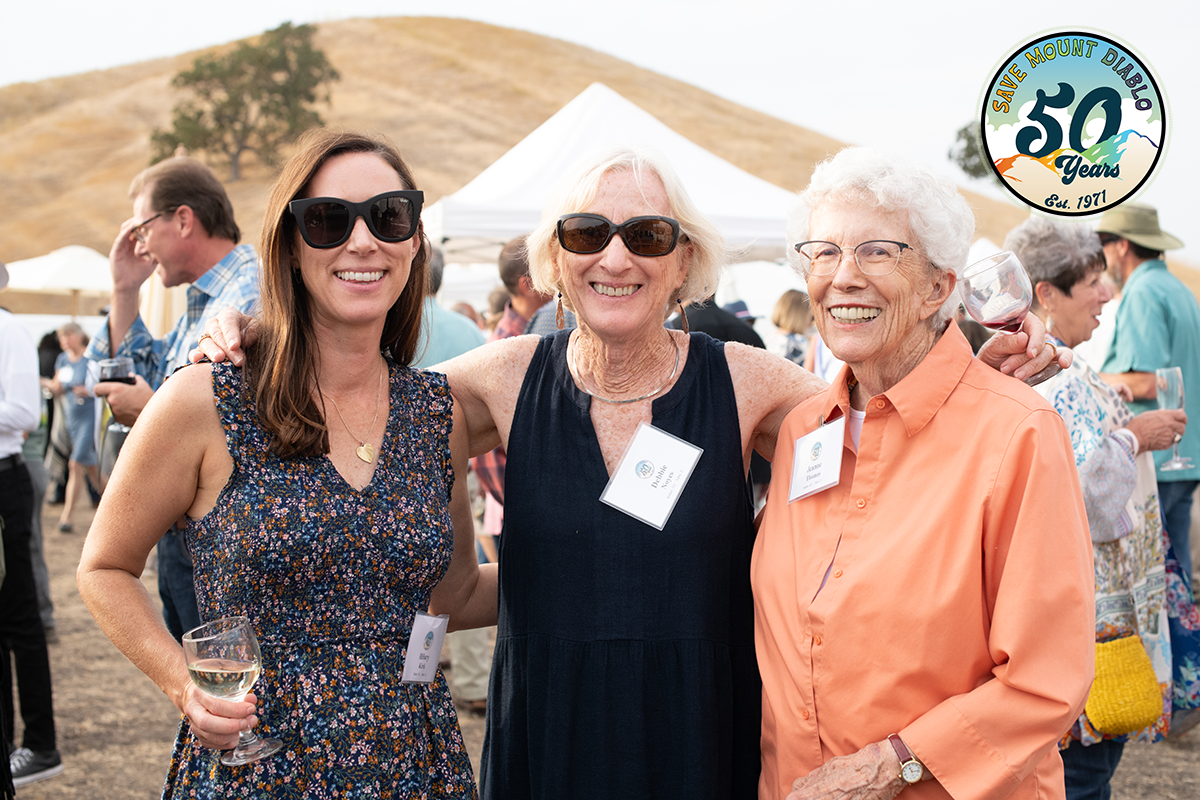 Jeanne Thomas (right) at Moonlight on the Mountain in 2022. Photo by Jessamyn Photography

To read more about Jeanne’s life and work, view her full oral history.