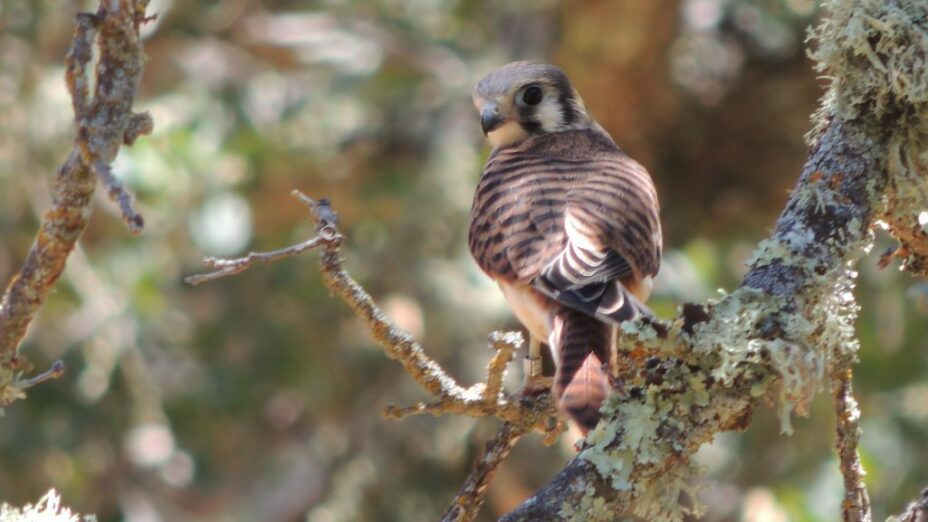 Over the past four years, we have been helping to support and research the American kestrel population on and around Mount Diablo.

Thanks to a Dr. Mary Bowerman Science and Research grant project, we and our partners have been better able to monitor kestrels in 37 nest boxes on our and nearby lands with strategically placed game cameras. 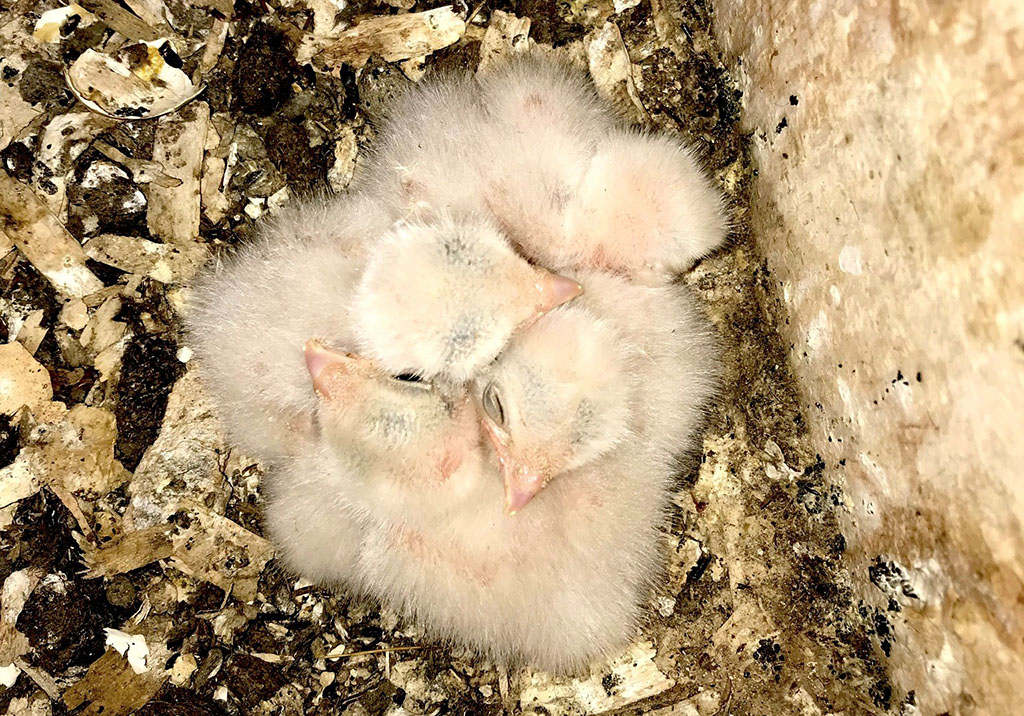 Kestrel eyas (fledglings) in one of our nest boxes. Photo: Brian Richardson

Currently, we have determined that up to 75 percent of our nest boxes have successfully served as American kestrel habitat.

Kestrels have been notably abundant at Lime Ridge Open Space, Diablo Foothills Regional Park, and our Mangini Ranch Educational Preserve. The open grassy hills and hot dry climate in these areas provide the perfect conditions for these raptors to thrive. 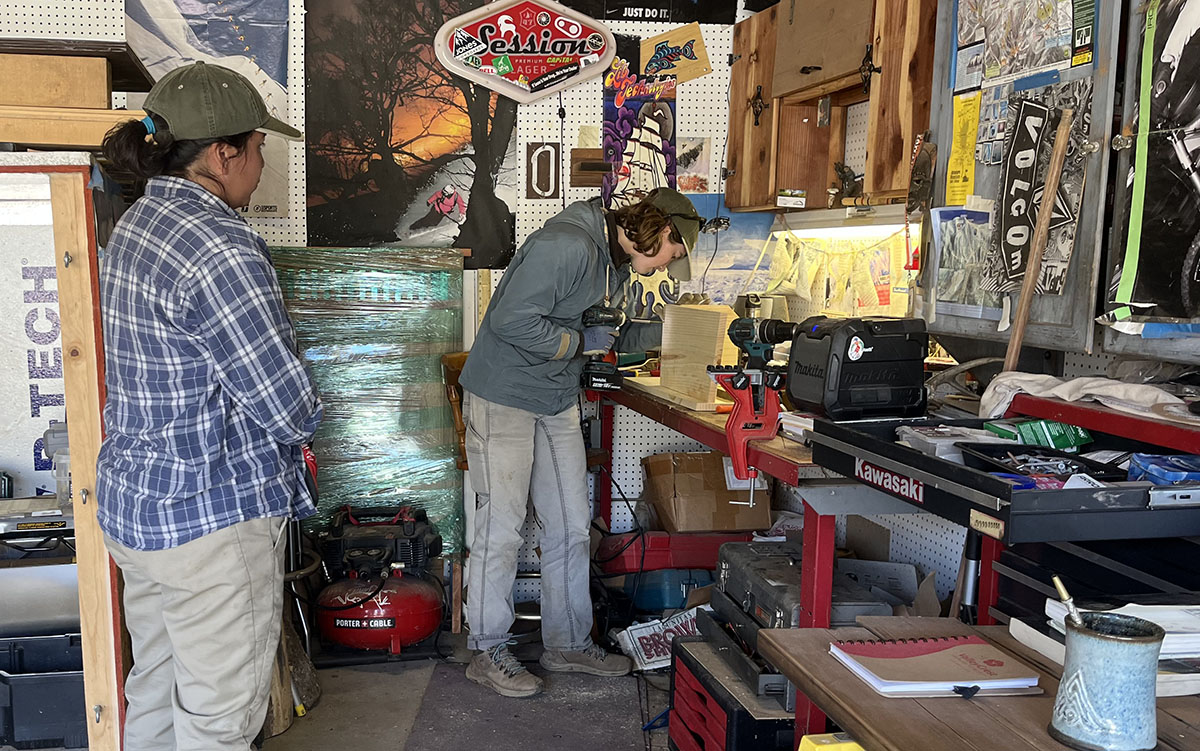 Over the past year, we’ve been building additional nest boxes for kestrels; we’ll soon share some of these with neighbors and local park managers to install on their properties.

For the past three years, we’ve join The Kestrel Campaign and Sherrill Cook (volunteer and falconer) from the Lindsay Wildlife Experience to release rehabilitated American kestrels at some of our properties.

To date, we’ve released 42 kestrels, not only on our properties but also on local agency lands managed by the East Bay Regional Park District, Walnut Creek Open State, and Mount Diablo State Park. 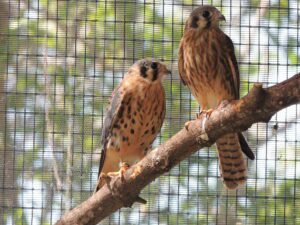 On June 30, seven kestrels were released into the blue oak woodlands at our Curry Canyon Ranch property. Curry Canyon Ranch was selected for its abundance of prey and proximity to Mount Diablo; we have aided multiple kestrel releases throughout the property.

After having been raised by Sherrill from when they were fledglings over the course of two months, the kestrels were banded and deemed fit to survive in the wild.

As their boxes were opened, the young raptors shot into the air—acclimating to their new surroundings and life of freedom. 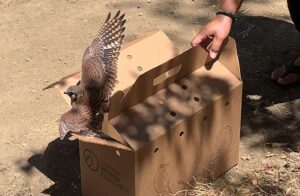 Kestrel being released back into the wild after rehabilitation. Photo by Mary Nagle

This year, we’ve observed 14 nesting pairs of kestrels in our nest boxes and dozens in the hills.

One mating pair can produce four to five eggs per clutch. So far, many of these pairs have produced healthy offspring—there have been 22 fledglings observed in five of our nest boxes in 2022!

Over the past several years, 93 kestrels have either been released or have fledged. We’re excited to contribute so positively toward the recovery of local kestrel populations.

Kestrels have been observed bringing all sorts of prey back to their fledglings in our nesting boxes; one was even caught on camera bringing back a king snake. 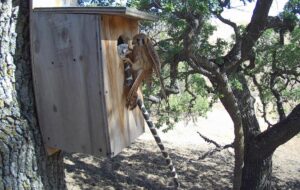 According to the University of Minnesota’s Raptor Center, the decline is likely due to a number of factors with habitat loss contributing significantly. Kestrels nest in cavities and hunt in open grasslands; they need these environments to survive.

We are continuing our work towards the goal of protecting American kestrel populations by working to prevent habitat loss throughout the Diablo Range.

Since we’ve started to survey and release kestrels at Mangini Ranch, we’ve observed eight to 10 kestrels a year and the use of all three of our boxes on this property.

Our Land Programs Director Sean Burke refers to Mangini Ranch as a “kestrel wonderland”—an ideal habitat with a growing population. Sean has personally observed kestrels utilize the boxes in this area on numerous occasions. 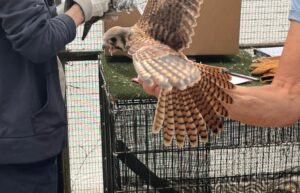