Text by Bruce and Joan Hamilton

We’re heading to a wild, windy spot we’ve visited more than a dozen times in the past two years. It’s fun, yes, but also an assignment: we’re helping Save Mount Diablo monitor the effects of the 2020 Santa Clara Unit (SCU) fires.

At almost 400,000 acres, the SCU was the fourth-largest fire complex in California history. Its footprint covered a huge swath of Save Mount Diablo’s namesake range.

Damage to structures was light, and it’s considered a “good” fire ecologically. But what does that look like on the ground?

In last year’s drought, we witnessed a healthy but excruciatingly slow regeneration of plants. This year? Well, we’re finding out.

The gallery below showcases images from an April 2, 2022, trip, enhanced with information from experts: naturalist/photographer Scott Hein and fire researcher and rare-plant specialist Heath Bartosh.

On our earlier visits, we’d amassed a pile of questions. Now we were about to get some answers. 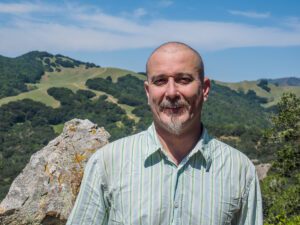 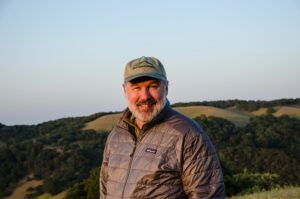 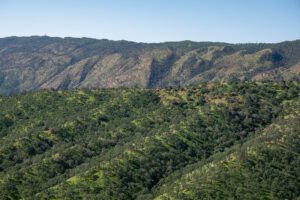 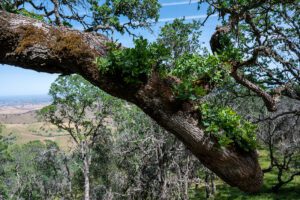 The first part of the journey wound through a woodland dominated by a nearly indestructible group of trees: the oaks. When a fire is so severe that oaks lose their aboveground structures, they can sprout from their root crowns.

More commonly, they survive the blaze, and they counter any losses of twigs, branches, and leaves with “epicormic sprouting” from their trunk and limbs, as shown above. After a couple of years, epicormic sprouting may be the only obvious fingerprint of a fire, Bartosh says. 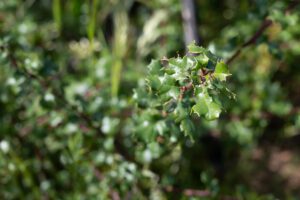 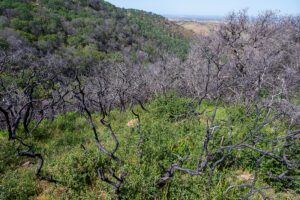 Torched by the 2020 fire, this stand of scrub oak is staging a vigorous comeback by sprouting from its root crowns. Given that scrub oak is an evergreen or “live” oak (it doesn’t lose its leaves each year), it’s behaving normally. 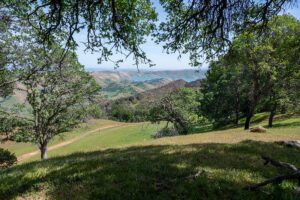 Most of the SCU fire burned at low-to-moderate intensity, which is typical of fires in the grassland and blue-oak woodland habitat that dominates much of the Diablo Range.

“With the openness of the canopy and the grass underneath, a blue-oak woodland is built for a low-intensity fire,” Bartosh says. “It’s really resilient in that way.”

Chaparral, on the other hand, burns hot, and that’s where the most dramatic changes happen.

“In post-fire botany circles, SCU ended up being kind of a buzzkill,” Bartosh says. “Because most of the area that it burned in the East Bay was woodlands that are structurally like this, with only a few patches of chamise.” 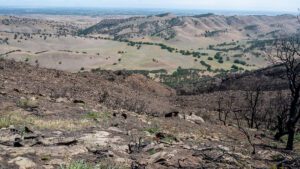 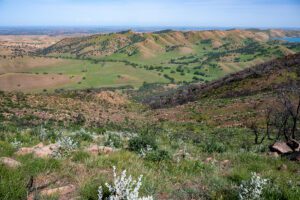 In the first April after the fire, this chaparral slope was alarmingly barren, at least from a distance. By the second April, however, the same slope is filled with grasses and shrubs, including (grayish) bush mallow, a shrub that shows up after fires and stays around for a few decades. 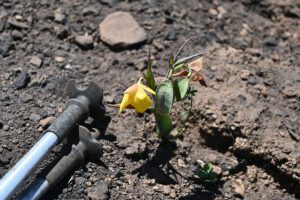 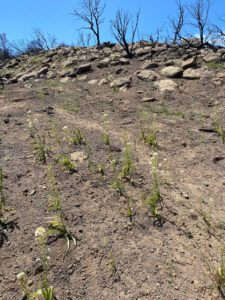 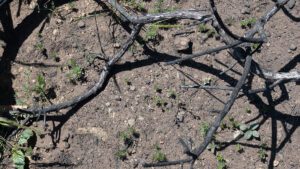 Despite the chaparral slope’s barren look in the first spring, it was speckled with sprouts in places, including common star lilies and Mount Diablo globe lilies. Chamise, too, was trying to make a comeback, sprouting from seeds and roots.

In the second spring, however, lilies are scarce. Bartosh explains that, the first year after a fire, plants that store energy in bulbs, like lilies, have a leg up on plants that sprout from seed.

“So they take advantage of the open space and extra nutrients, and really go for it.” In the second year, “you don’t see them as much.” 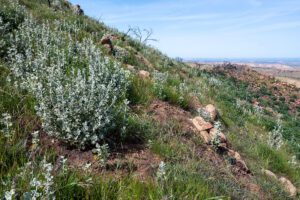 Chamise is the dominant shrub in the Mount Diablo area. It came back aggressively almost everywhere after the 2013 Morgan fire in Mount Diablo State Park.

So why was it overtaken by bush mallow, grasses, yerba santa, and toyon on this particular slope? “It’s not uncommon for fire to completely alter a dominant vegetation community,” Bartosh says.

But chamise will rise again. “Bush mallow leaves a fingerprint of the fire for a short while,” Bartosh says. “If you came back here 20 to 30 years from now, the chamise would likely have started to take over.” 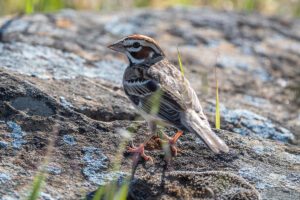 The day we visited was not particularly birdy. But we did see a lark sparrow (a ground-nesting bird) perching in the blackened limbs of a dead tree.

As we watched, it hopped down to some rocks with a beak full of vegetation. “This area burned completely,” Hein says, “and the sparrow is still finding places to nest.” 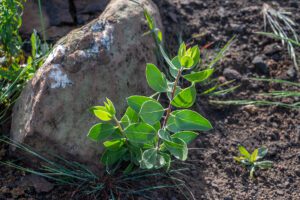 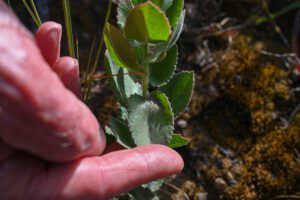 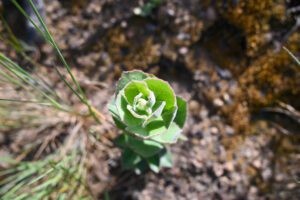 The species of manzanita that grow in Morgan Territory aren’t capable of sprouting from their root crowns, Bartosh says. They need time—and the right amount of moisture, heat, and light—to germinate from seeds, which seems dicey in a drought.

Visit after visit, we’ve been searching for signs of sprouts. This time we finally came across two different species. The first was probably a common manzanita. (It’s hard to tell when it’s so young.)

The second, with clinging, heart-shaped, gray-green leaves, was unmistakably a Mount Diablo manzanita, which grows nowhere outside the greater Mount Diablo area. We hooted, we hollered, we celebrated their powers. 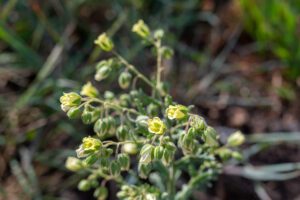 Certain plant species called “fire followers” not only do well after a fire; they are rarely seen at any other time. On this trip, our first fire-following flower was whispering bells.

The plants were smaller and less abundant than we’ve seen after other fires, but no less charming. When they dry out this summer, their seeds will “ring” in the breeze. 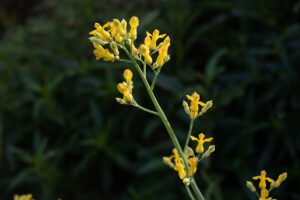 We scrambled downhill to our second fire follower—a large, tap-rooted plant with two- to six-foot stalks topped by clusters of blossoms that looked like tiny peeled bananas to us.

But whoever named the plant “golden ear drops” may have had cobs of corn in mind—even Google won’t say. 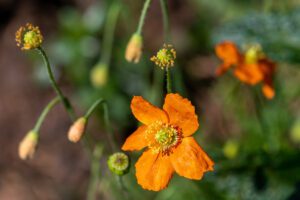 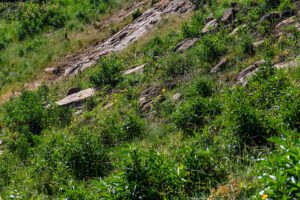 Less obvious, on the same steep slope, was the best flower of the day, or even a lifetime:  the fire poppy. It’s a fire follower, rarely seen at any time except after a fire—and even then hard to find.

Its delicate silver-dollar-sized blossoms last only a few days. But each plant has flowers in several stages of maturity. “They don’t flower at once,” Bartosh says. “They don’t want to give up their encore right away.”

Fire poppy seeds are notoriously tough: they remain viable in the soil for generations. The slope we’re on, for example, hasn’t burned for at least 50 years (and probably a lot longer). Yet in the first spring after the fire, poppies pushed up here in profusion.

We know that only because Save Mount Diablo staffers Sean Burke, Denise Castro, Roxana Lucero, and Haley Sutton roamed far and wide until they found them.

This year, Hein and others have found a few fire poppies in places where there have been no recent fires. That’s not supposed to happen, so now we have a mystery to solve.

Hein says they were growing in soil stirred up by trail maintenance crews. 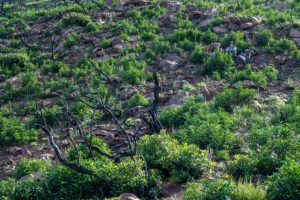 Pausing to rest in the rocks, we felt like we’d won the botany triple crown: whispering bells, golden ear drops, and fire poppies in a single afternoon! Not to mention good stands of bush mallow, which should soon be blossoming pink.

But there’s a bittersweet edge to our accomplishment. “It’s going to be a bit of a battle to get into some of these places next year,” observes Hein. “Third-year post-fire is not really a fun place to be,” says Bartosh, with authority.

Weeks later, though, we’re still hoping to continue this fire-fueled quest: to photograph those pink blossoms, to watch the manzanitas grow, to see if poppies and ear drops and bells will show up again next year, to expand our knowledge of the 200-mile-long Diablo Range.

Here’s hoping the chaparral will let us in.