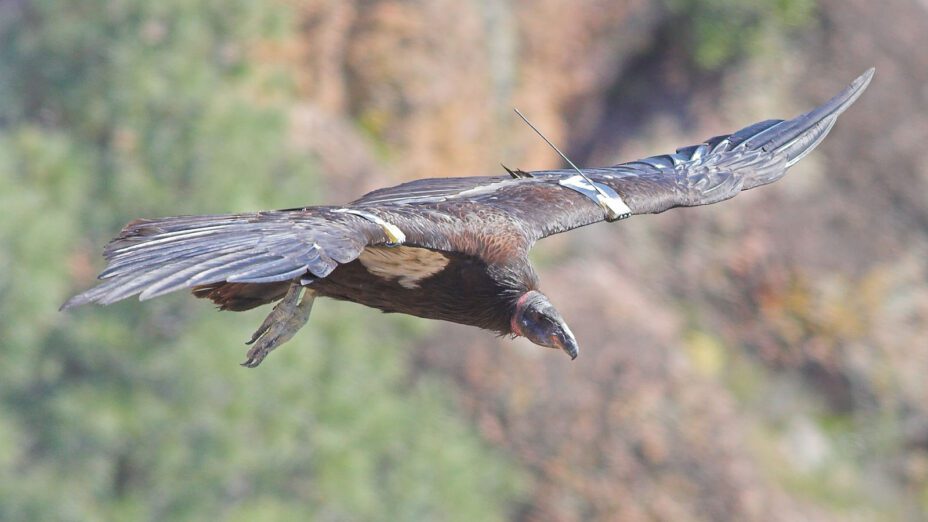 With wings stretched far apart and hundreds of feet of air separating him from the ground, Mol’-luk soared far above the world. With his giant wingspan, flying was effortless—he could glide for miles without raising a feather. If he looked to the west, he would see what’s now San Francisco, and if he looked to the east, he’d see the monumental Sierra Nevadas.

Mol’-luk is a California condor who lived on Mount Diablo. He is a major character who existed in the beginning of time, as told through this Native American tribe’s creation story. Mol’-luk helped birth Wek’-wek who in turn created people. The character of Mol’-luk highlights just how significant California condors were to life in the Diablo region, and one can safely assume that Mol’-luk didn’t fly alone; the California condor once thrived in California (hence the name).

Last year, a California condor visited the Mount Diablo region. This was the first recording of the bird in Contra Costa County in more than a hundred years.

We recently awarded a grant to the Pinnacles Condor Recovery Program to better understand condors’ recovery in the Diablo Range. There’s good reason to think the Diablo Range is playing a critical role in the return of this endangered species, emphasizing the need to preserve one of California’s least protected mountain ranges. 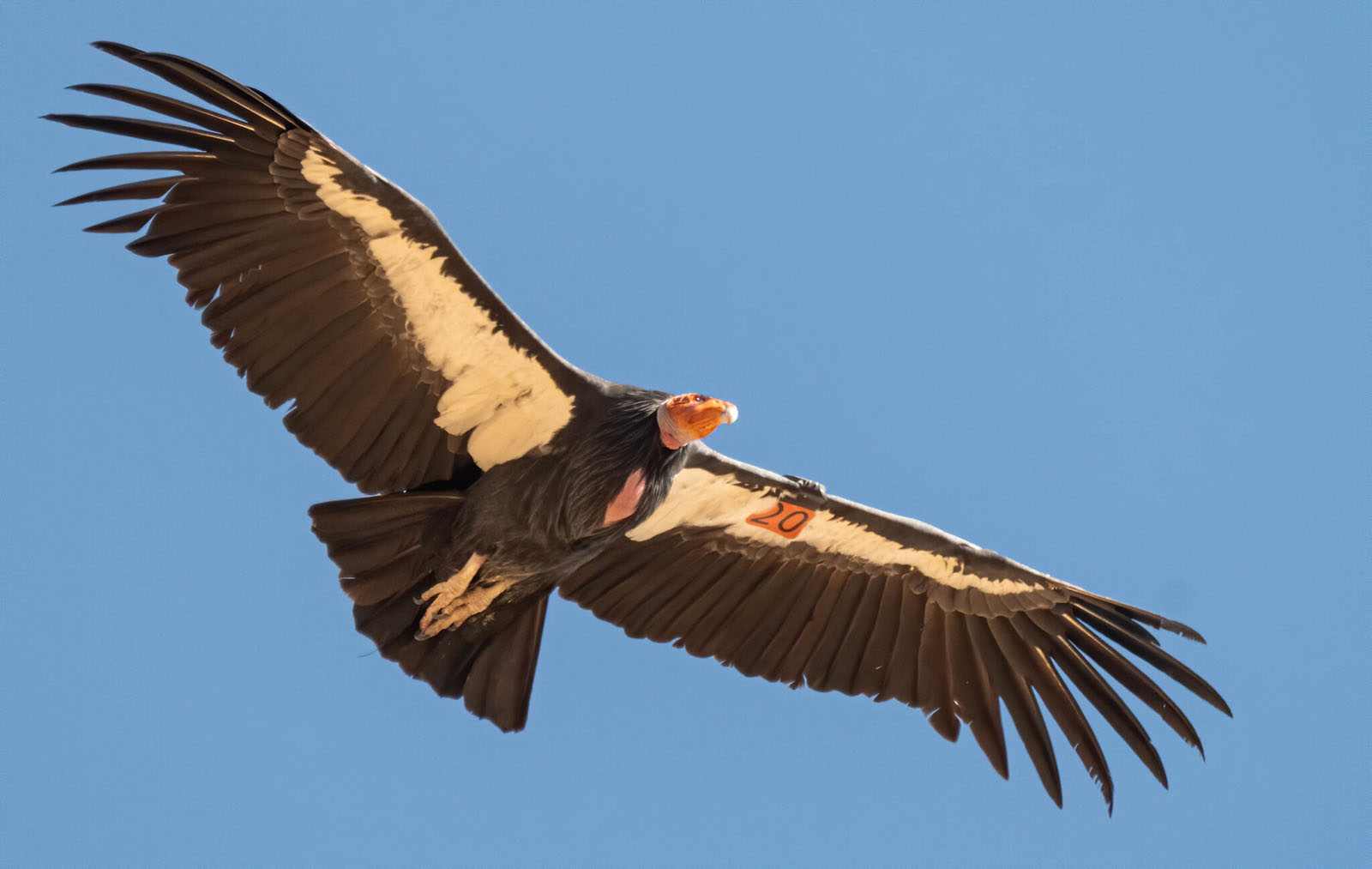 The recovery of the California condor is one of the most famous success stories in conservation history, and for good reason.

The plight of the California condor began, unsurprisingly, because of human impacts. Lead poisoning, habitat destruction, pollution, poaching, and other factors all led to a dwindling population.

The condor nearly went extinct. In 1987, the last remaining birds were captured for protection.

Elizabeth Kolbert describes the incredible effort that went into saving the species in her Pulitzer Prize–winning book, The Sixth Extinction: An Unnatural History:

“By the mid-nineteen-eighties the population of California condors had dwindled to just twenty-two individuals. To rescue the species—the largest land bird in North America—wildlife biologists raised condor chicks using puppets. They created fake power lines to train the birds not to electrocute themselves; to teach them not to eat trash, they wired garbage to deliver a mild shock. They vaccinated every single condor—today there are about four hundred—against West Nile virus, a disease, it’s worth noting, for which a human vaccine has yet to be developed. They routinely test the birds for lead poisoning—condors that scavenge deer carcasses often ingest lead shot—and they have treated many of them with chelation therapy. Several condors have been taken in for chelation more than once.”

Today, there are more than 500 condors living both in and outside of captivity. Like a phoenix, the condor came back from virtually nothing. Instead of rising from the ashes, they returned with the helping hands of conservationists.

Tracking Condors within the Diablo Range 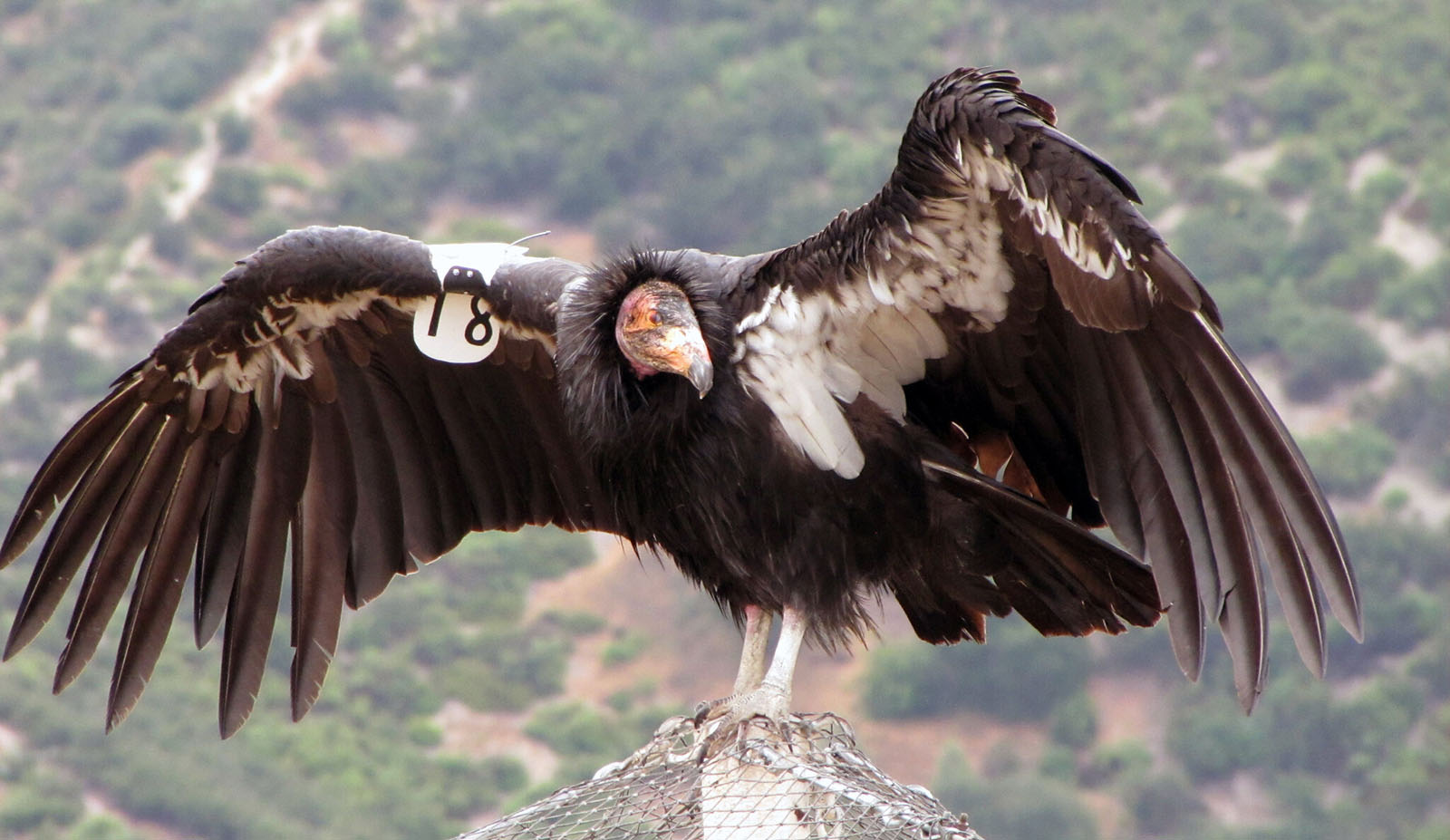 A California condor spreads its massive wings at Pinnacles National Park. Photo: California Department of Fish and Wildlife / CC BY

In 2021, a California condor visited the Mount Diablo region for the first time in over 100 years—an event that received a great deal of regional attention. The flight path of Condor 828 showed it circling around the eastern flanks of Mount Diablo before returning south to Pinnacles National Park.

Condor 828 came from the Pinnacles Condor Recovery Program. All their condors are outfitted with a visual ID tag and a radio transmitter, but only some are given GPS transmitters.

Radio transmitters emit high-frequency radio pulses that are picked up by a receiver, so trackers can tell which way the animals are going and when they’re getting closer to it. Unlike GPS transmitters, radio transmitters won’t consistently track geospatial positioning. Without a GPS transmitter, a condor’s flight path won’t be recorded (Condor 828 was one of the lucky birds with one).

GPS transmitters are much more costly than radio transmitters. Because not all condors currently have a GPS transmitter, there is a very real possibility other condors are making the voyage to Mount Diablo under the radar. 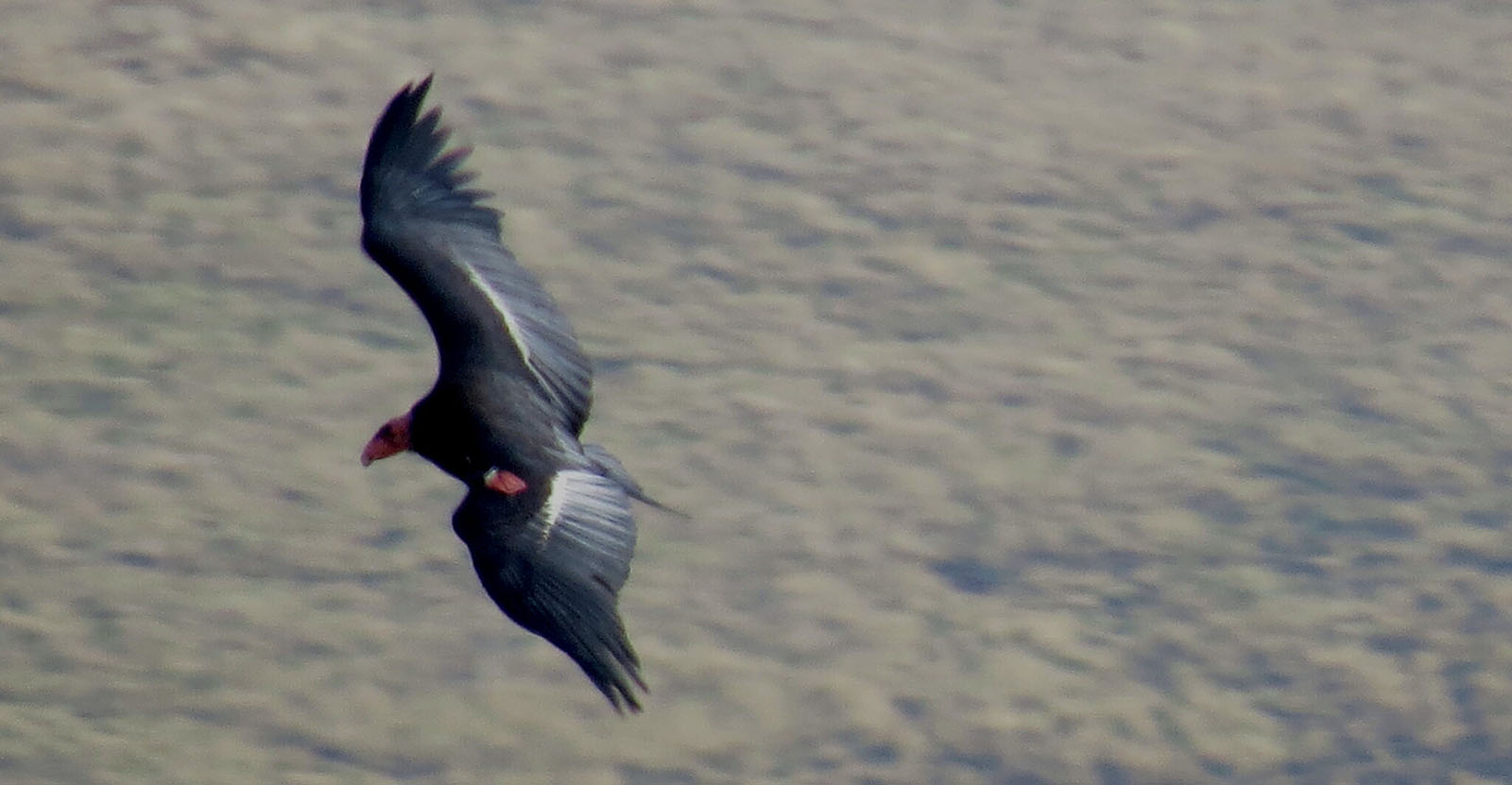 “For years Save Mount Diablo has been saying that as the California condor population grew that they would end up at the peaks and cliffs around Mount Diablo,” Land Conservation Director Seth Adams stated. “The Diablo Range is a mountain lion, golden eagle, California condor wildlife corridor freeway—they all follow major undeveloped open space corridors, and that’s exactly what the Diablo Range is.”

Pinnacles National Park is located near the central region of the 200-mile-long Diablo Range. The entire range is largely undeveloped (only two freeways cross the entire strip), and because Pinnacles is located near the middle, it offers condors various options of where and how to venture out. 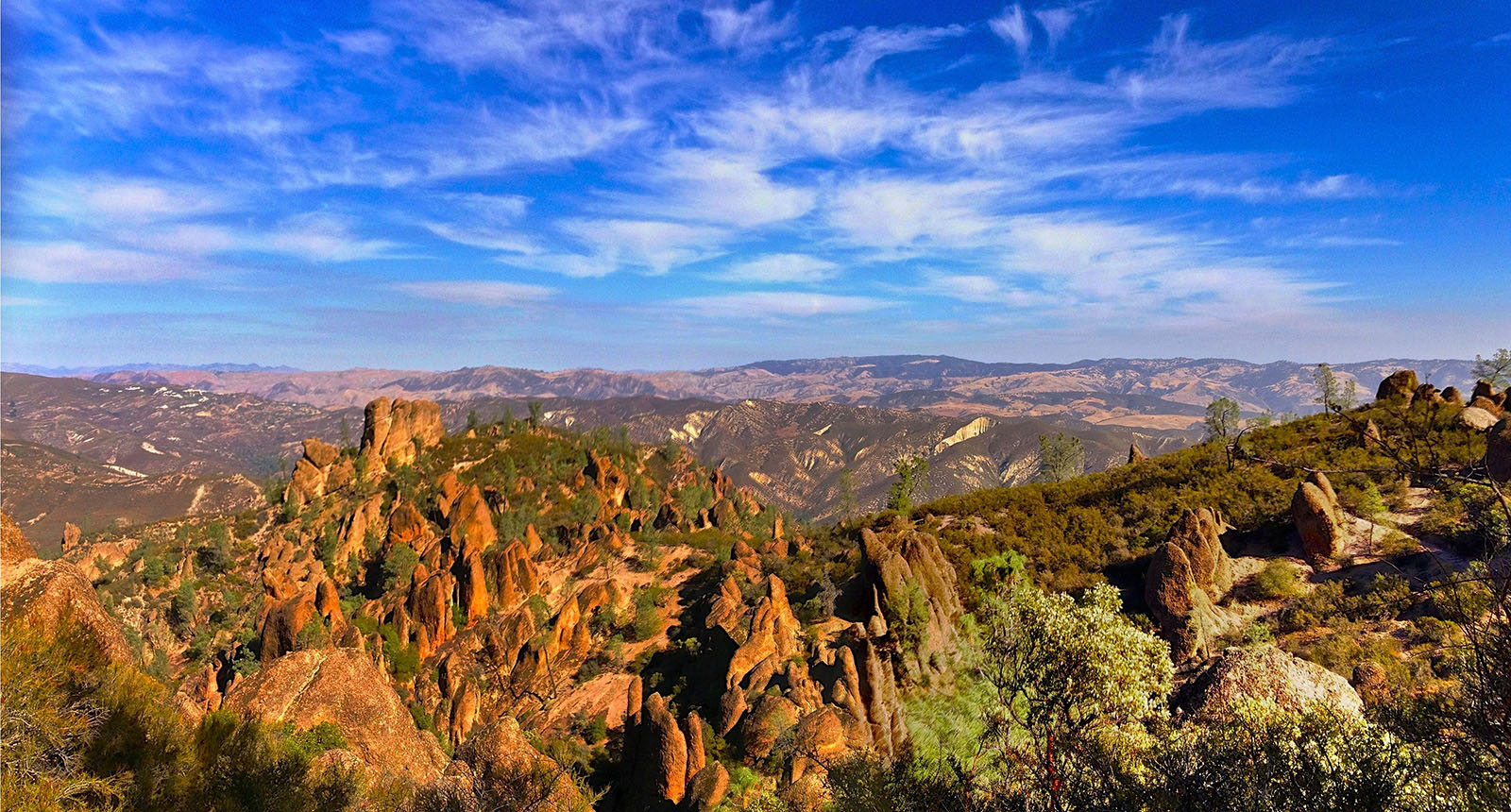 To better understand California condors and their migration routes, we’ve given a grant to the Pinnacles Condor Recovery Program so they can purchase more GPS trackers to more accurately monitor condors.

GPS trackers for birds are still a relatively new technology. In the past, GPS devices were bigger and heavier and could only be attached to larger species like bears. Since they’ve become light enough for birds, they’ve helped scientists understand things like hunting, migration, mating, feeding patterns, and so forth. They can even be used to help catch poachers.

This grant is the furthest south project we have supported in our 50-year history. Pinnacles National Park is about 105 miles as the crow files—or rather as the condor flies—from Mount Diablo State Park.

Recently, we’ve been expanding our area of interest further south into the Diablo Range. We believe that the Diablo Range can be California’s next great conservation story, and if endangered species like the California condor are using this range as a freeway—relying on it for safe travel—there is an undeniable need to preserve it. 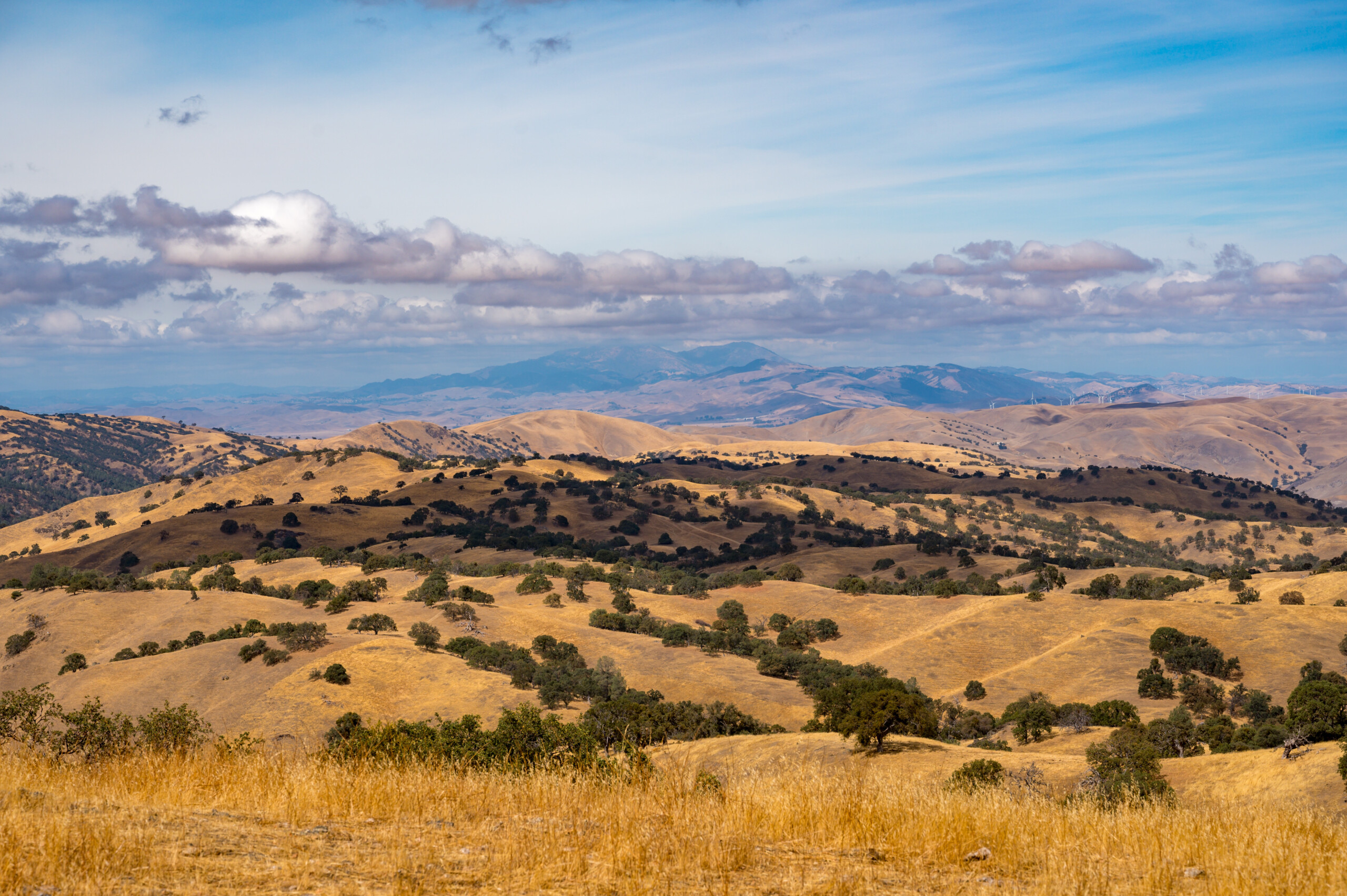 Mount Diablo as seen from within the Diablo Range. Photo by Scott Hein.

Kelly Sorenson, Executive Director of the Ventana Wildlife Society (a nonprofit that releases and monitors condors), states, “As the population grows, it will expand its range into the Bay Area.”

California condors aren’t the only species that are returning from near extinction. After nearly going extinct nationally—and disappearing from the Diablo region altogether—the peregrine falcon can once again be seen in the cliffs of Pine Canyon, thanks to a project initiated by Save Mount Diablo.

Success stories like these show the effectiveness of caring for species and how populations can bounce back near zero. Bringing species back is, though, a multidimensional process. If the animal lacks any suitable habitat in the wild, they’ll be forced to spend their lives in captivity regardless of how strong their population grows.

By continuing and expanding conservation efforts, we can ensure that these endangered species can return to the places that they once called home for thousands of years.