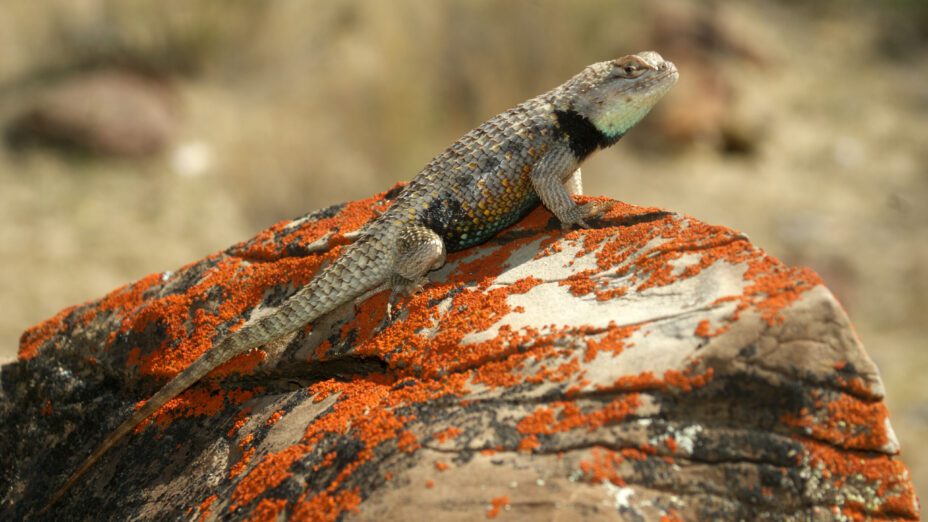 an austere landscape of wide panoramas, sparkling night skies, and a population no higher today than in 1900. It rests on the edge of nowhere, nearly an hour’s drive from either Los Banos or Hollister, the closest cities. Drive its forlorn roads and you may not pass another vehicle for miles. The area is comprised of a series of valleys— Little Panoche Valley, Panoche Valley, and Vallecitos—and a group of weathered hills just west of the San Joaquin Valley and Interstate 5. Those dry hills are bereft of trees, too parched for even drought- tolerant blue oaks, though a smattering of junipers laces the higher elevations. As for the stream beds, they’re largely dry washes, too harsh for sycamores and willows, lined only by cottonwoods and, unfortunately, tamarisk. 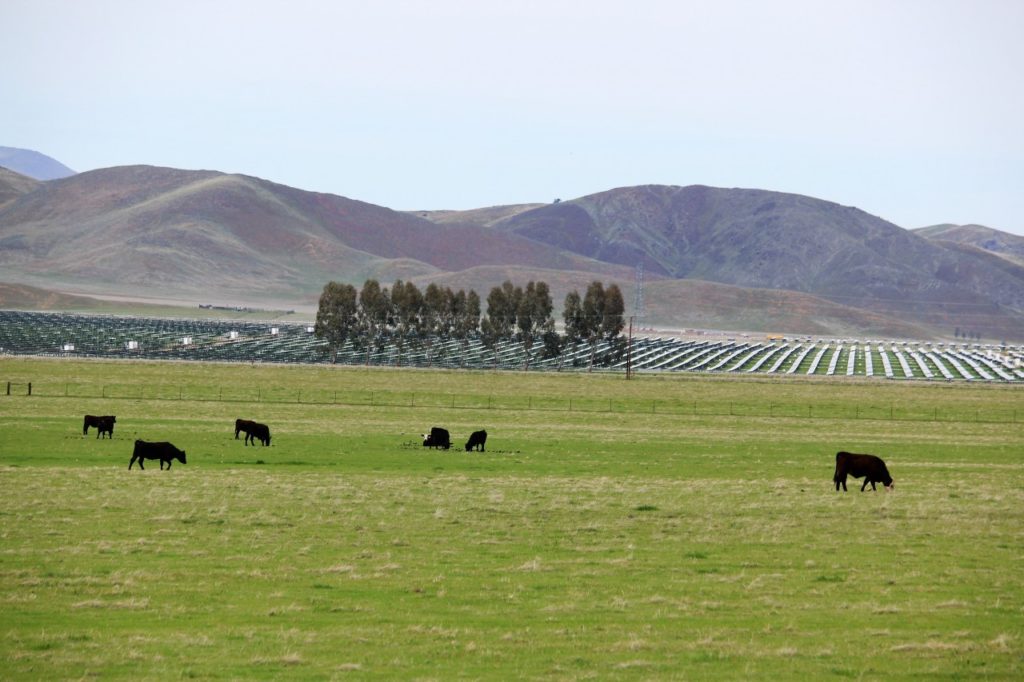 For a brief time each year those hills and valleys are awash in color, and in some years the early spring wildflower displays are spectacular. Goldfields, tidy tips, and creamcups blanket the valleys, while the slopes are cloaked with orange California poppies, lemon-yellow Monolopia, and purple phacelia. But the flowers fade fast, and for most of the year the region is muted in earth tones. This arid steppe of short grasses and scattered shrubs can seem barren and monotonous, downright lifeless. 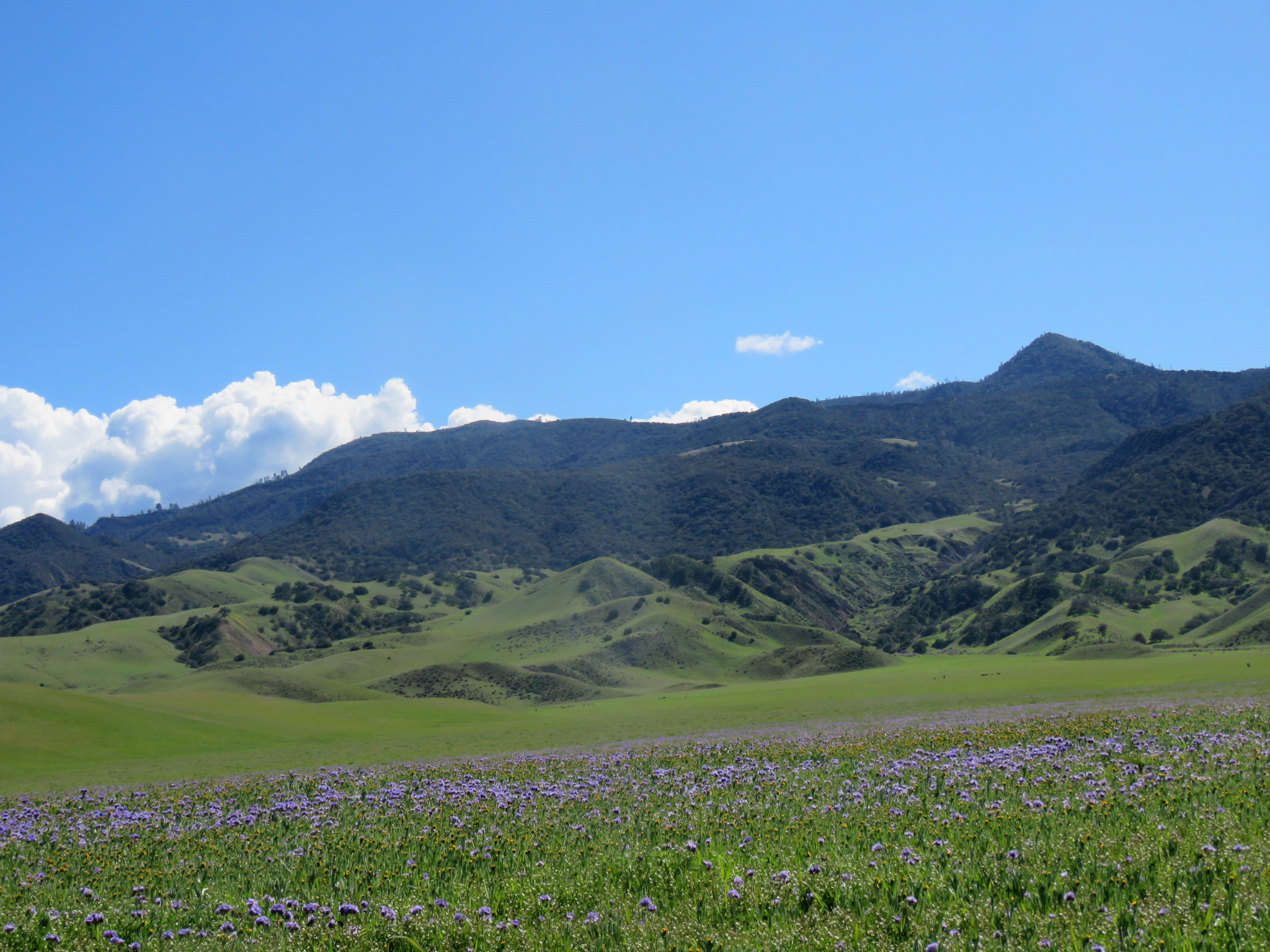 But looks can be deceiving. Panoche Valley has been designated an Important Bird Area by the National Audubon Society, where wintering rarities such as mountain bluebirds, ferruginous hawks, and mountain plovers can be seen, along with year-round residents such as tricolored blackbirds, short-eared owls, and greater roadrunners. 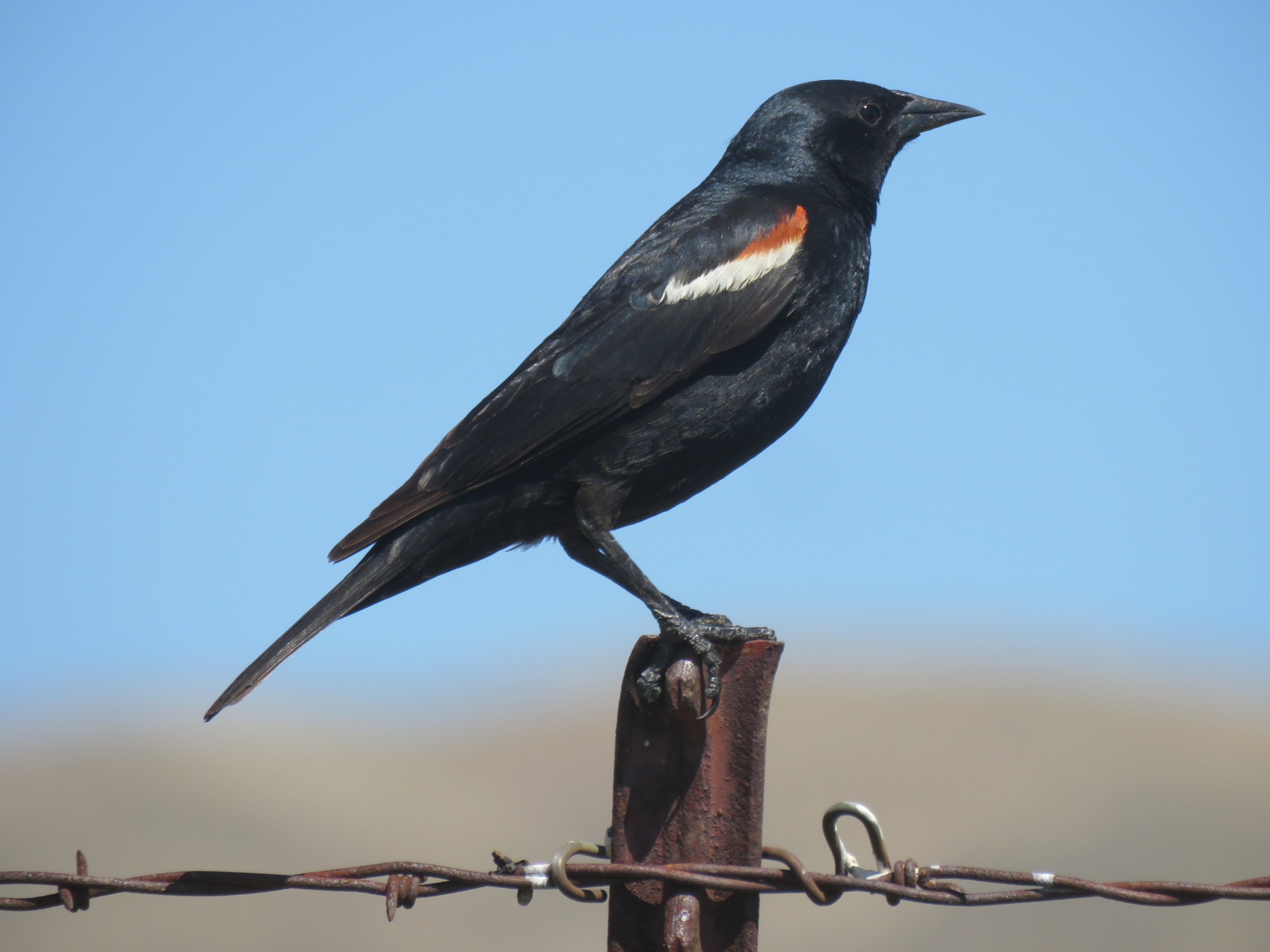 A tricolored blackbird sitting on a fence post along Panoche Road. Photo by Joseph Belli.

Reptile enthusiasts might encounter glossy snakes, San Joaquin coachwhips, and long-nosed snakes, while the area provides habitat for one of only two known populations of desert night lizard in northern California (the other occurs in Pinnacles National Park). The tiny nocturnal lizards are closely associated with chaparral yucca, which grows in patches on the slopes of the Panoche and Griswold Hills. 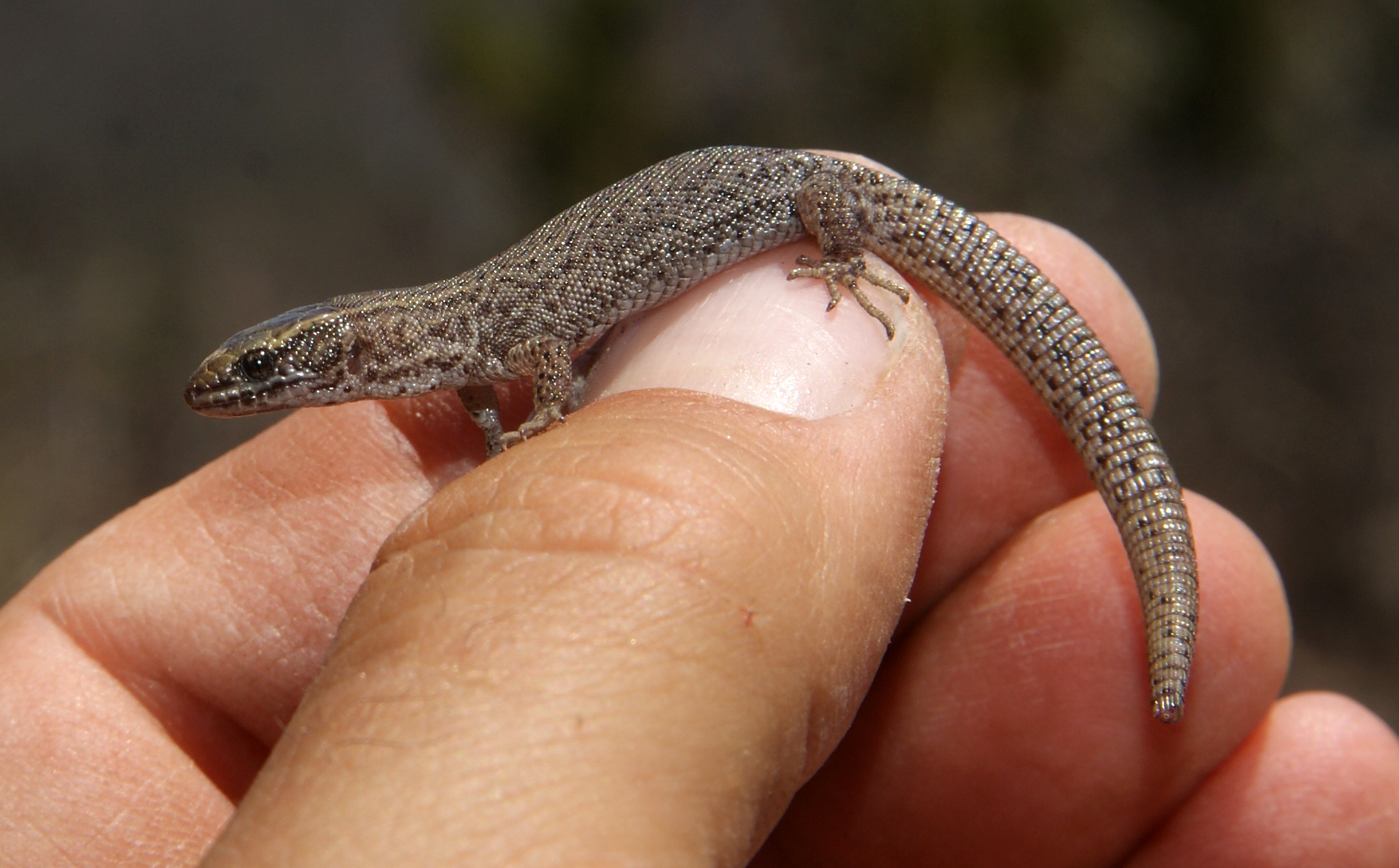 California’s northernmost population of yellow-backed spiny lizards resides there as well. Relatives of the ubiquitous western fence lizard, spiny lizards are considerably larger, noticeably spinier, and feature a black collar. And despite the paucity of water, California tiger salamanders, western spadefoot toads, and western pond turtles all call the area home. Though it might appear to be a simple and Godforsaken landscape, Panoche houses a treasure trove of plants and animals from one of California’s most imperiled ecosystems, the San Joaquin Desert.

…the southwestern portion of the San Joaquin Valley has recently begun to be recognized as a desert, since the region usually receives less than 10 inches of rain annually and its original flora was dominated by desert shrubs such as saltbush and ephedra rather than grasses. The Ciervo Hills even boasts sandy habitat, the Monvero Dunes, which resemble something you might expect in Death Valley. During the Pleistocene a number of species entered the San Joaquin Valley from the Mojave Desert and eventually became isolated. Over time, that isolation produced a suite of creatures and plants endemic to the San Joaquin Valley. San Joaquin kit foxes, blunt-nosed leopard lizards, San Joaquin antelope squirrels, and several species of kangaroo rats all evolved from predecessors in the Mojave. 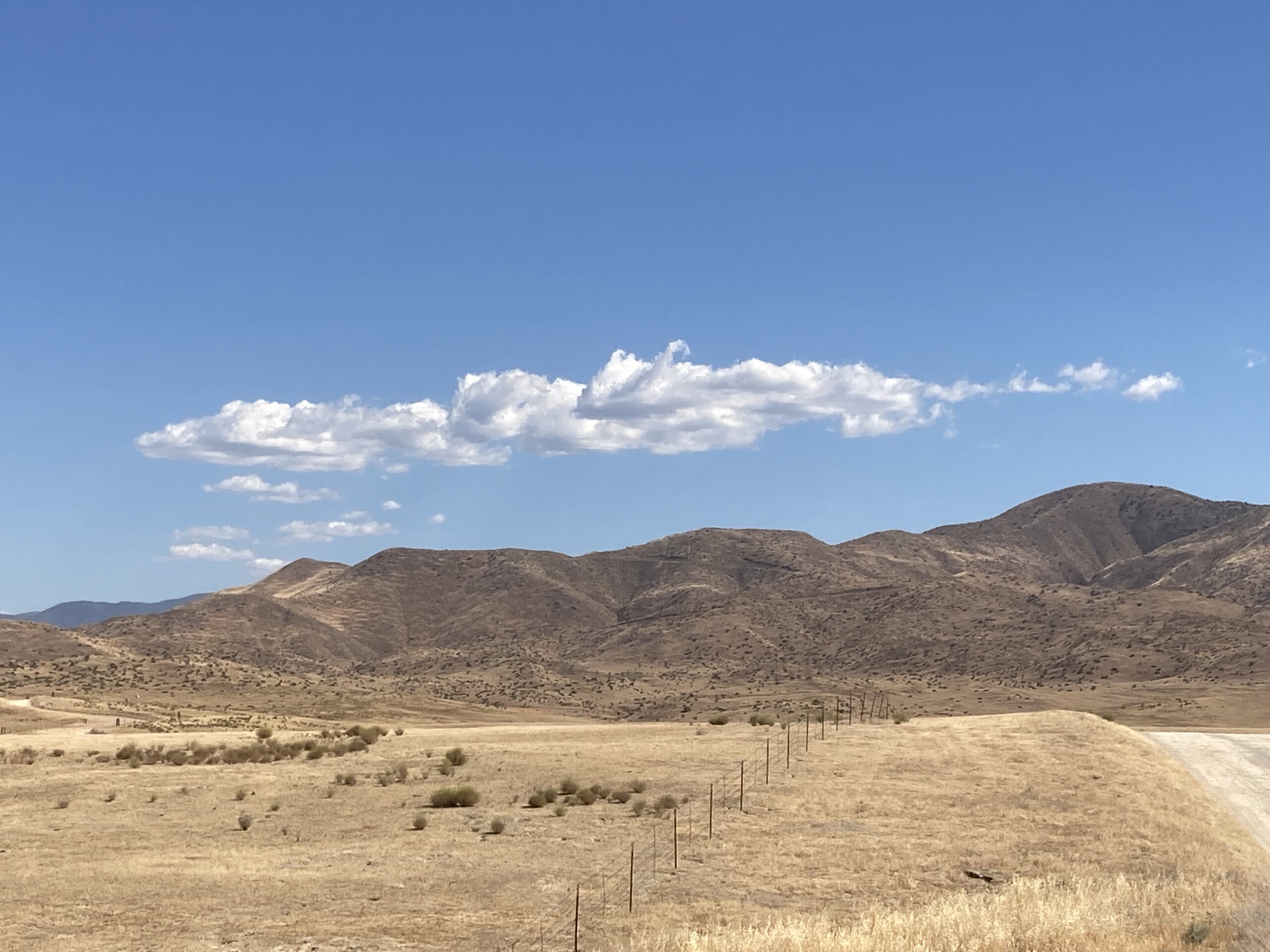 San Joaquin kit foxes, North America’s tiniest canid and a charismatic endangered species, were until recently found as far north as Tracy and Antioch, in the shadow of Mt. Diablo. Today their range has contracted and they are rarely detected north of Los Banos. The Panoche area represents the northernmost of three core populations, and if kit foxes are ever to be re-established to the areas adjacent to Mt. Diablo, it will almost certainly require a healthy population in Panoche. 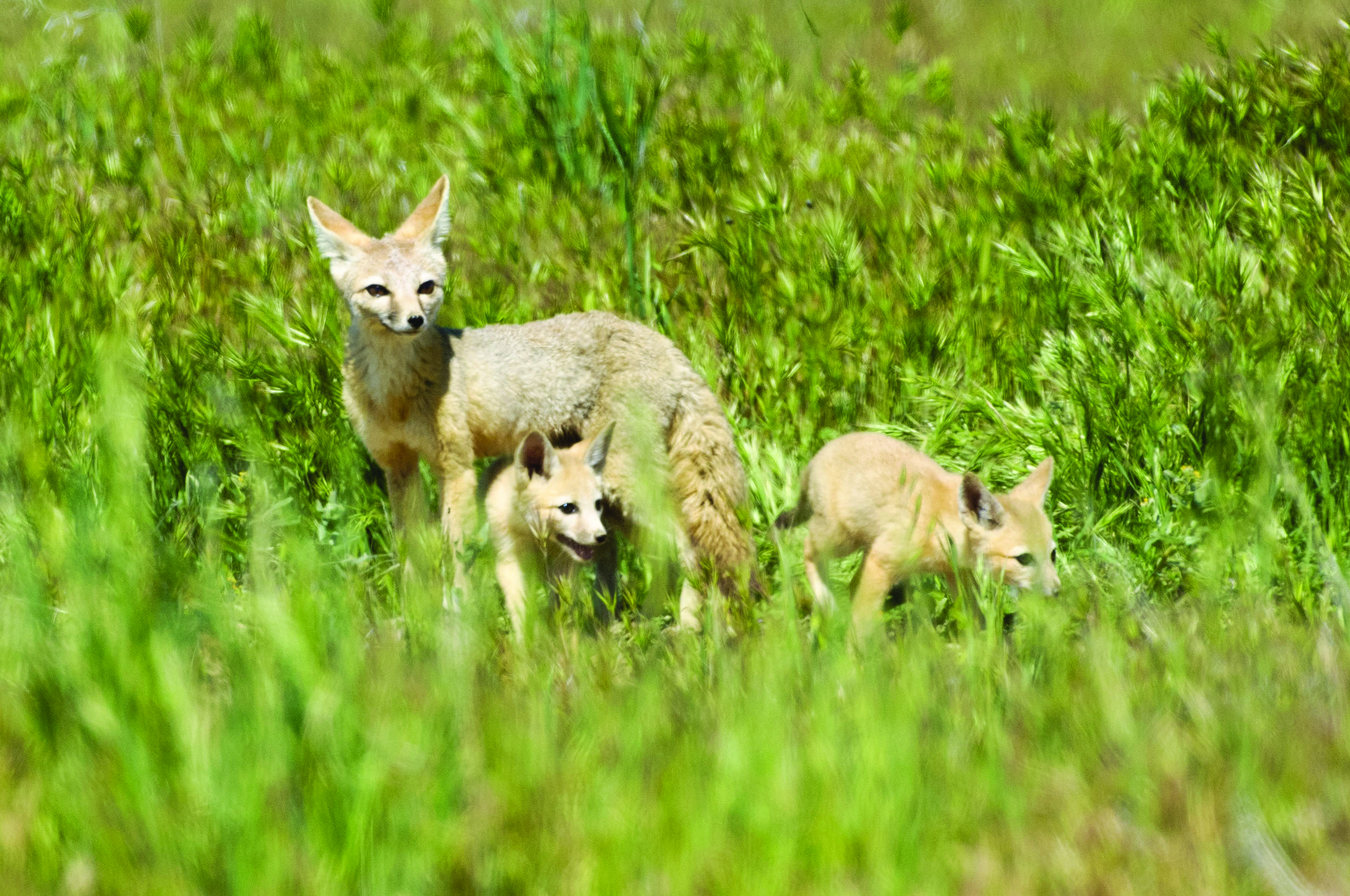 A San Joaquin kit fox with her “kits.” Photo by Scott Hein.

Blunt-nosed leopard lizards, another endangered species, may have existed as far north as Corral Hollow. Today, the large, handsomely-blotched lizards are no longer found north of the Panoche Hills.

San Joaquin antelope squirrels are true desert denizens. With tiny bodies and wispy tails, they’re sometimes mistaken for chipmunks, especially given the white stripe on each side of the body. They feature a host of physiological adaptations to a hot, dry environment, including the ability to derive all the moisture they need from their food. Today their population is fragmented, and though they once existed as far north as Los Banos, today their northern limit is Panoche.

The giant kangaroo rat is one of several kangaroo rat species to evolve in the San Joaquin Valley. More closely related to squirrels than rats, widespread habitat loss has decimated their numbers, and Panoche provides a refuge for this endangered species.

A century ago these species were all rather common…

…but as the San Joaquin Desert was transformed by agricultural development, oil extraction, and urbanization, that habitat disappeared, reduced to isolated parcels too meager to sustain populations over time. 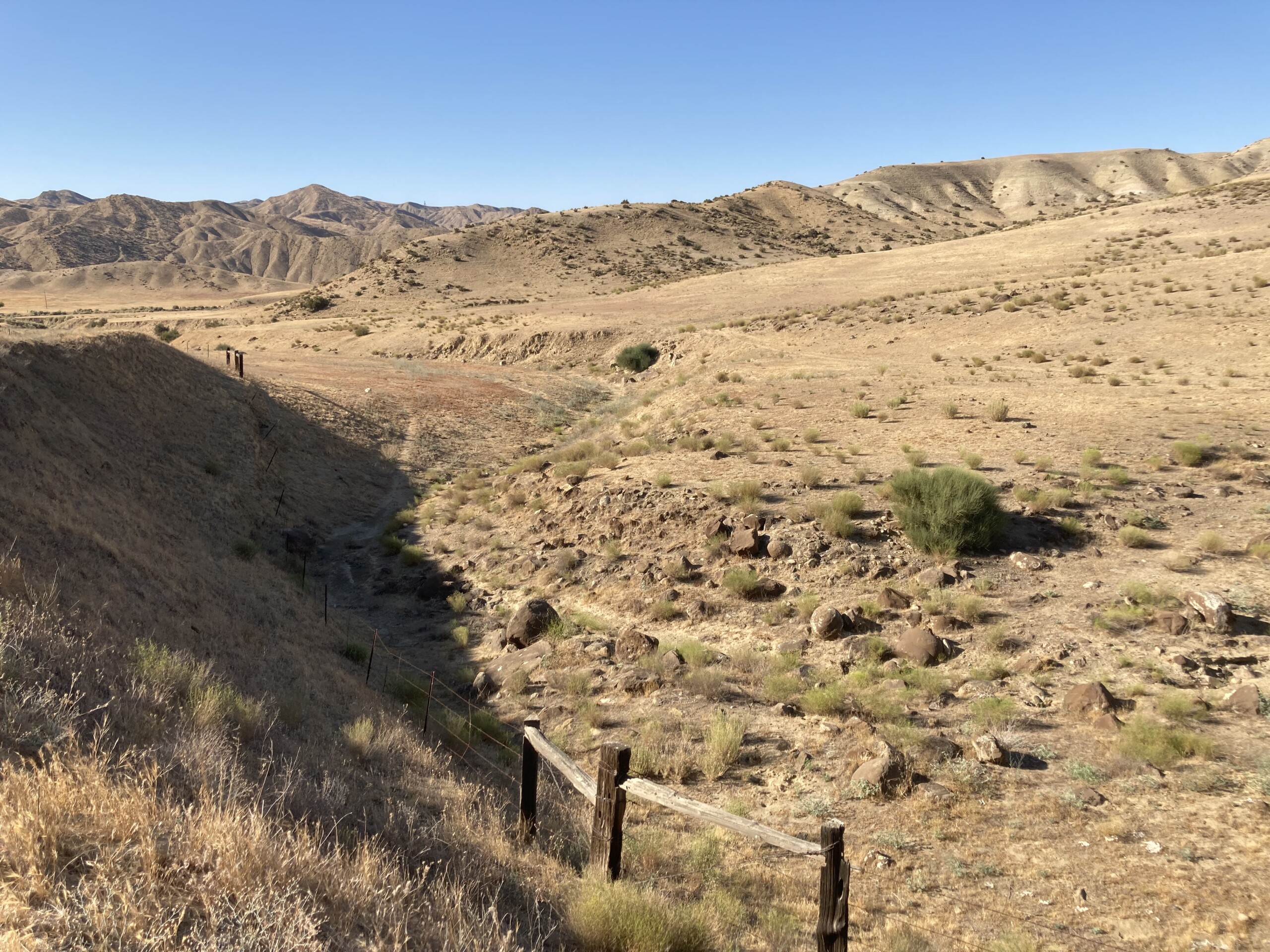 The wildlife endemic to Panoche are being threatened by human development. Photo by Seth Adams.

Today there remains a paltry fragment of desert on the floor of the San Joaquin Valley, and the most intact segment of San Joaquin Desert today actually lies outside the San Joaquin Valley, on the Carrizo Plain. And north of Carrizo, the best remnant desert exists in Panoche. The endemic species that rely on that habitat are now all in peril, and the Panoche area represents one of their last sanctuaries. That makes Panoche not only unique, but also one of the most important segments of the Diablo Range.

I certainly didn’t recall anything extraordinarily special about the place…

when I first passed through it in 1986 on my way to San Benito Mountain. But I remember being struck with the magnitude of the isolation and the subtle charms of its desolation. Though I wasn’t yet aware of its connection to endangered species, I had a feeling I’d be back.

Years later I struck up a friendship with one of the region’s few residents, and in so doing found myself returning time and again, getting to know the area through all four seasons. By then I’d developed a consuming interest in blunt-nosed leopard lizards, and in 2009 I was hired by the Bureau of Land Management to survey for the species throughout their nearby holdings. 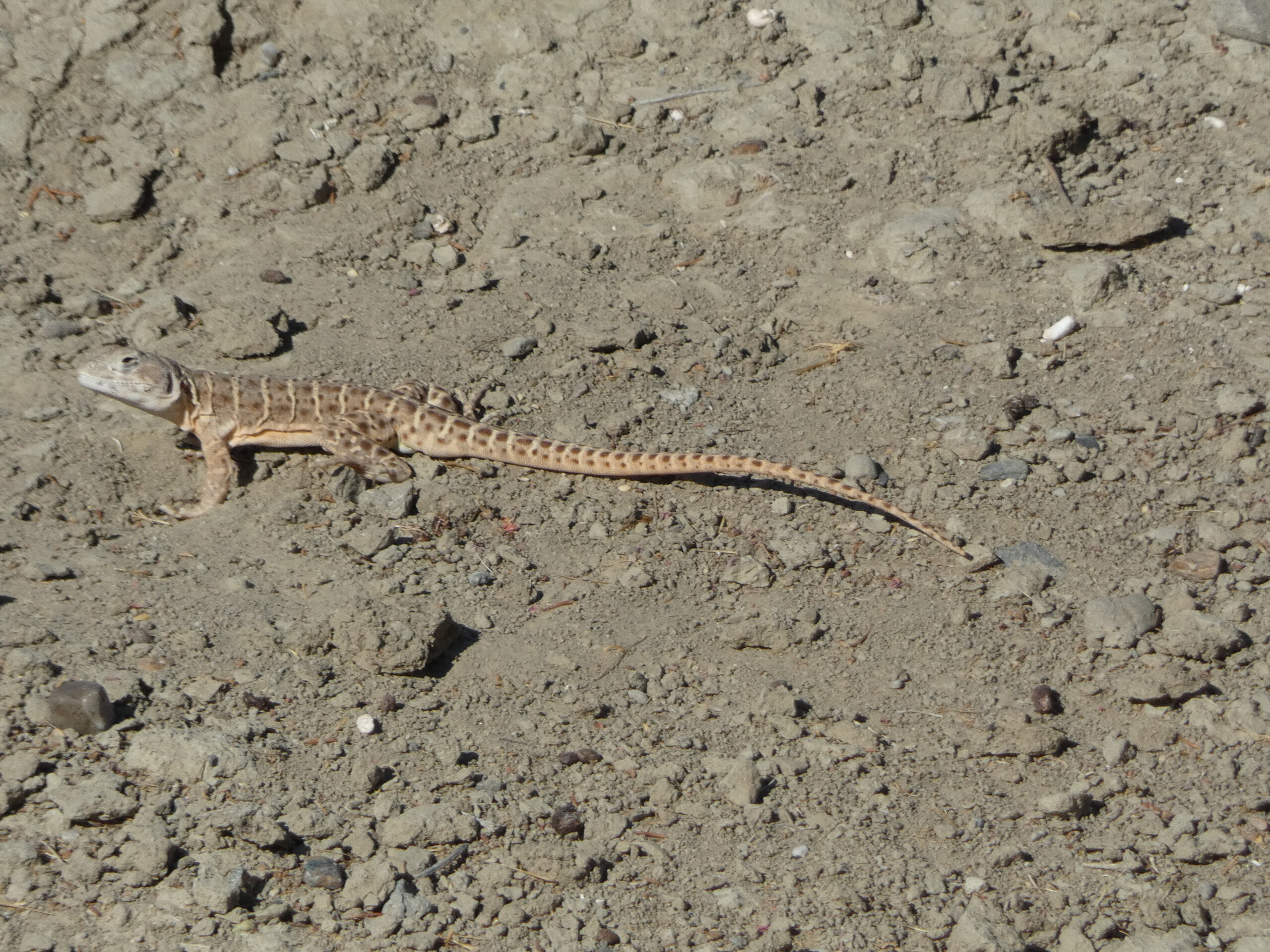 That summer I spent 10 field days, a total of 60 hours, wandering through promising habitat in a quest to find this rare and elusive lizard. On a typical day the high temperature was in the mid-90s; 85 degrees was downright cool, while the hottest day was 111. I’d walk slowly, focusing on the edge of ephedra bushes and burrow entrances, and in all that time and walking, I found a grand total of three lizards.

Leopard lizard work was followed by something more hands-on…

a genetic study of yellow-backed spiny lizards. For that, I’d need to collect DNA samples. That meant capturing lizards, a challenging proposition considering my peak lizard-catching prowess was at least 30 years in the rear view mirror. Catching spiny lizards by hand, however, seemed about as realistic as plucking dragonflies out of the air. It wouldn’t come to that. The method of choice for those seriously interested in capturing speedy lizards is noosing. You can fashion a noose out of lots of things, even a stalk of wild oats. A stick will do, or, better yet, a fishing pole. I was provided a state of the art graphite noosing pole, one of the few commodities on earth not available on Amazon. It was the Rolls Royce of noosing poles, with an impressive 13 foot extension. The noose itself could be fashioned out of a number of materials: fishing line, copper wire, thread. I chose dental floss, which I worked into a slip knot at the end of the pole. The object is to work the noose around the lizard’s head and yank back. Although that sounds positively brutal, the lizards suffer no ill effects, and scurry off afterward none the worse for wear. 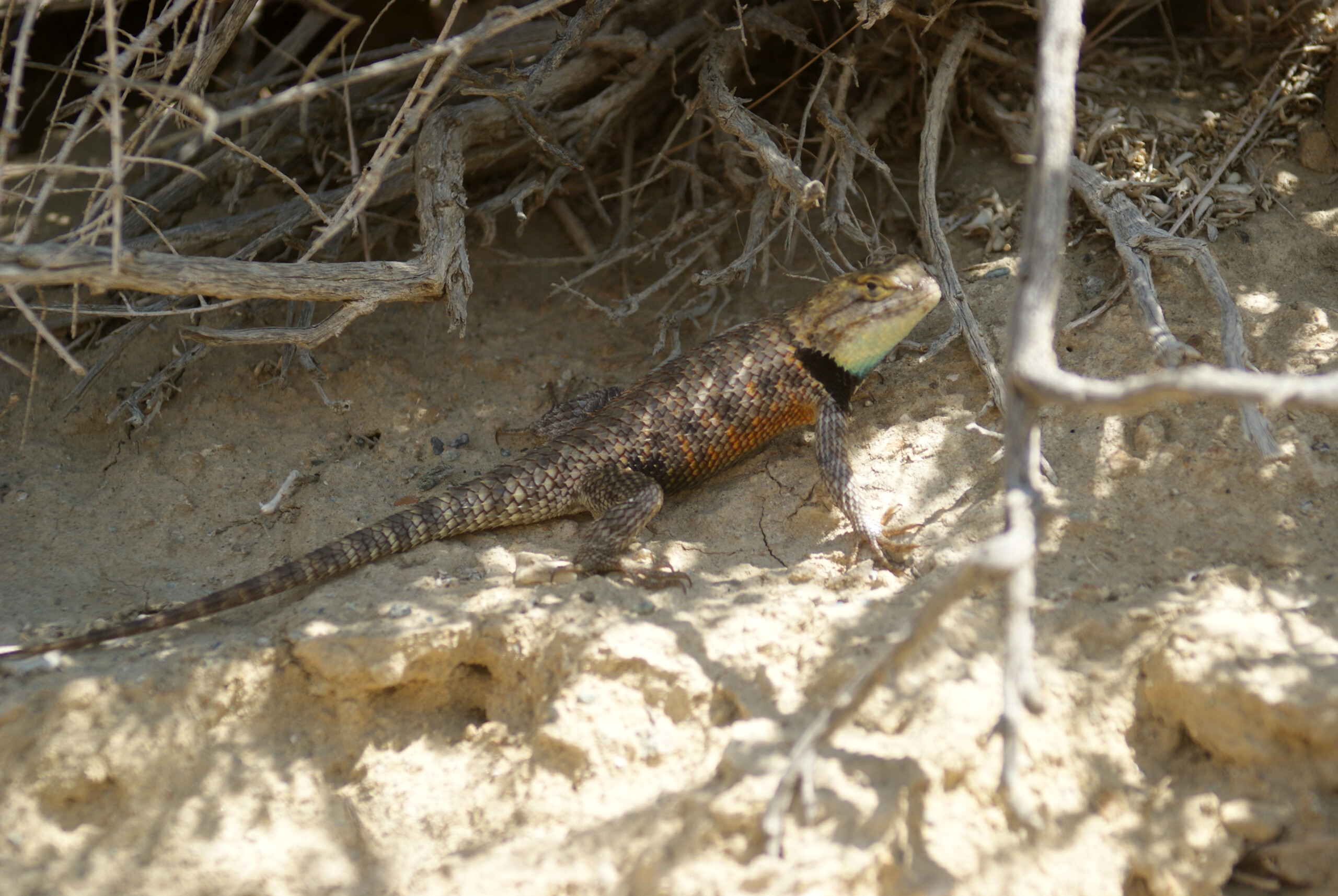 Noosing a lizard, even with a fancy 13 foot pole, proved to be easier said than done. They can be exceedingly wary, and usually bolt for the nearest crevice. My success rate was therefore probably closer to a batting average than a free-throw percentage. With those I did manage to catch, I snipped the end of the tail—a section just under half an inch long—with toenail clippers and placed it in a tiny vial filled with alcohol. Again, the tail is detachable, and I never saw any lizard react to the clipping. Those specimens were sent to a lab for testing. We were wondering if the Panoche population might be isolated enough to warrant its own designation as a separate subspecies or perhaps even an entire species, but I never saw the results of the genetic analysis.

Searching for spiny lizards took me all over the region.

Unlike leopard lizards, which prefer flat ground, spiny lizards like rocky areas and are equally at home on slopes. I had my share of long days with little to show for it, yet each outing provided something to remember: lesser nighthawks cavorting at twilight, kit fox tracks in the dust, a brief glimpse of a San Joaquin coachwhip. One day as I was walking along the banks of mostly dry Silver Creek I was startled to see a group of western pond turtles plop off a boulder into a nearby pool as I approached. That turtles could survive in such an arid, harsh land seemed beyond belief, but there they were. My fondness for the area was growing by leaps and bounds. Panoche had worked its magic on me.

I don’t get out to Panoche much anymore.

The lizard studies are over, and a solar project that many of us fought against now occupies a portion of the valley. But more than anything else, my friend passed away suddenly and unexpectedly in the spring of 2017. Over the years we’d spent a lot of time together driving those roads, and it seemed as if every stretch held a memory. So often houses and dwellings remind us of those who have passed, and I suppose the same could be said for streets, even entire neighborhoods. But in this particular instance, so can a landscape. 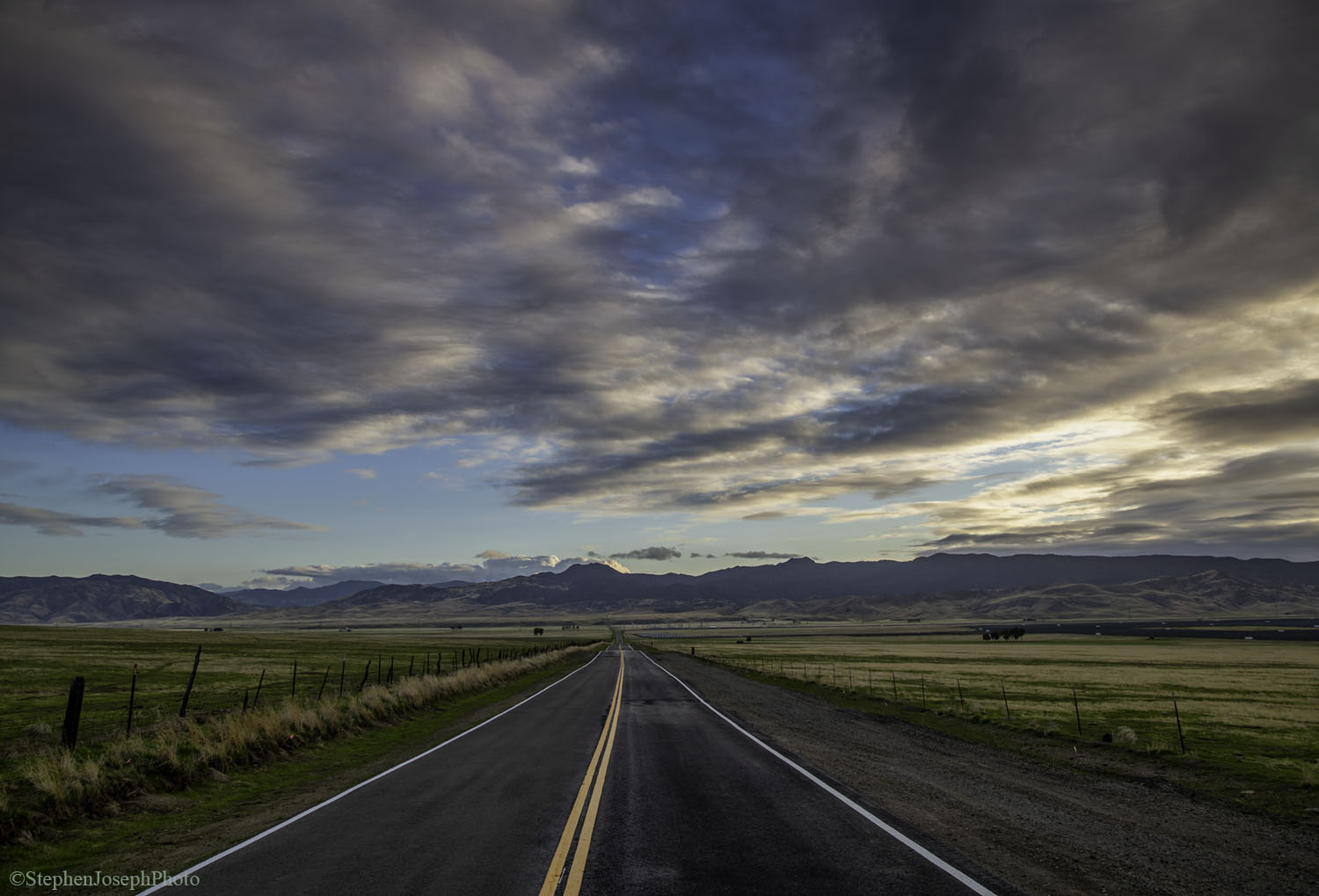 The development of the solar farm is one of the more recent changes to Panoche. Photo by Stephen Joseph. Used with permission.

Top photo: A yellow-backed spiny lizard on a boulder along Silver Creek, by Joseph Belli 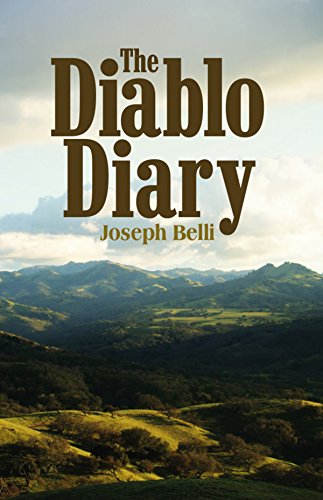 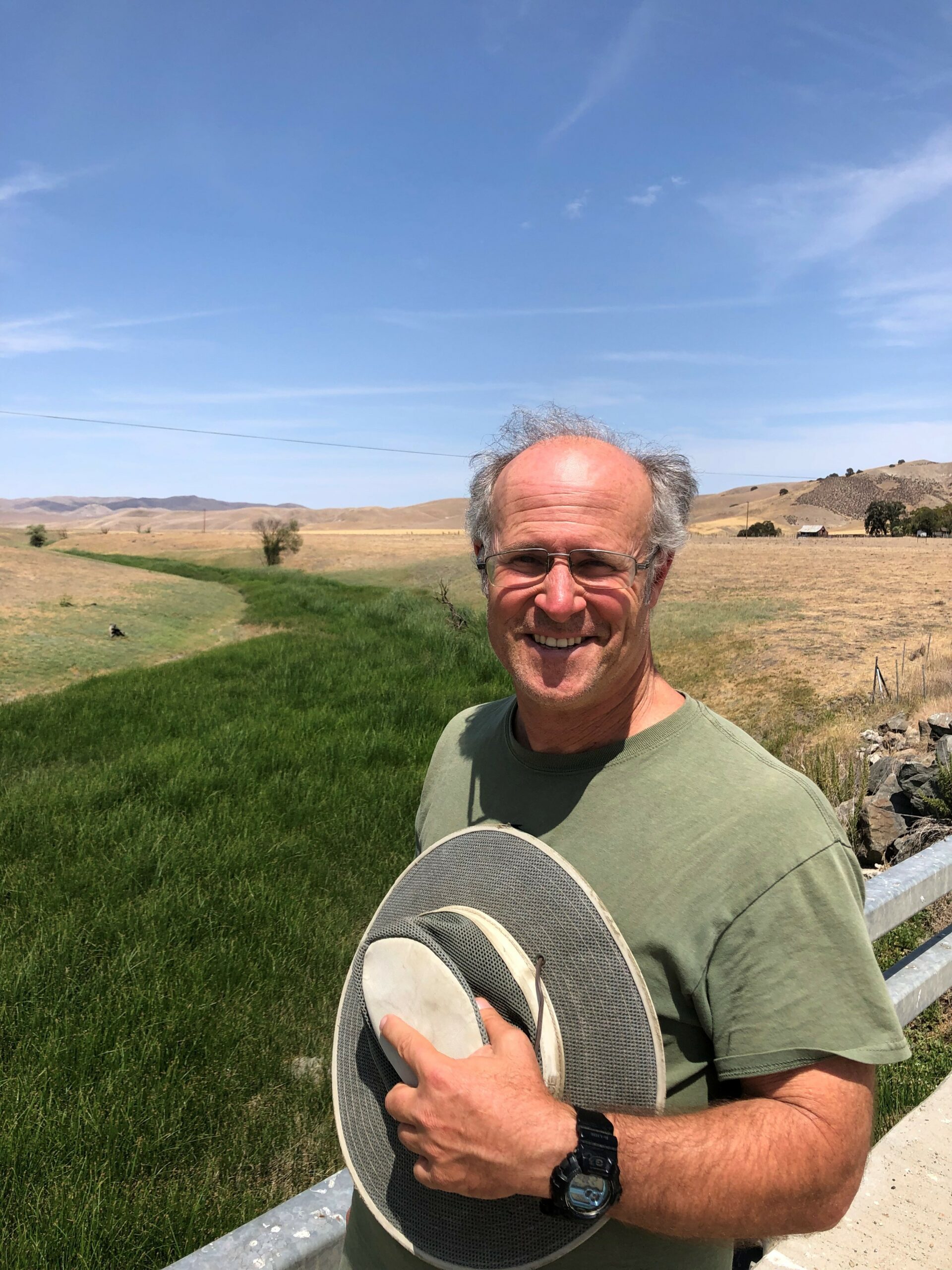 Joseph Belli has explored the Diablo Range since he was a child, when his family moved to its foothills. He earned a degree in conservation biology at San Jose State University and has worked for the National Park Service, surveying the land, animals, and plants in the area. He lives in Pacheco Pass near Henry Coe State Park. He is the author of The Diablo Diary, and he is currently working on his second book, about the California Condor Reintroduction Program, for which he is a volunteer.