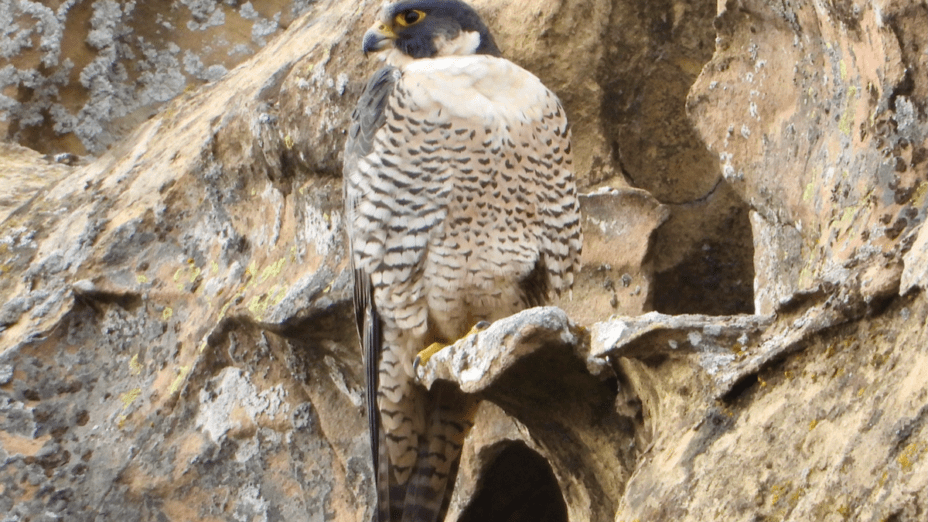 Mom was delivering a pigeon for lunch when the attack came. It was clutched in her talons, a fat and important meal for her three noisy, impatient nestlings, who needed every calorie she could give them in preparation for their first flight, only days away.

Then the nestlings fell silent, and confusion set in. They scanned the sky, hunched, as their mother veered upward, away from the nest.

In her wake and closing fast was a smaller raptor, a prairie falcon, awake to the slower speed of the burdened peregrine, and intent on stealing its prey. The peregrine took a sharp turn straight up while doing a quick rollover, exposing the pigeon to her pursuer.

Flying upside down, she transformed herself into a mid-air landing field to slow the impact of the prairie falcon, a move designed to make the peregrine drop her prey. She did not.

But the prairie falcon grappled aboard, both birds screaming, and the birds tumbled together from on high, disappearing behind the tree line and out of sight.

The whole encounter took 15 seconds. Whatever happened behind that screen of trees among the cliffs, the peregrine managed to prevail, and lunch proceeded as if nothing had happened. 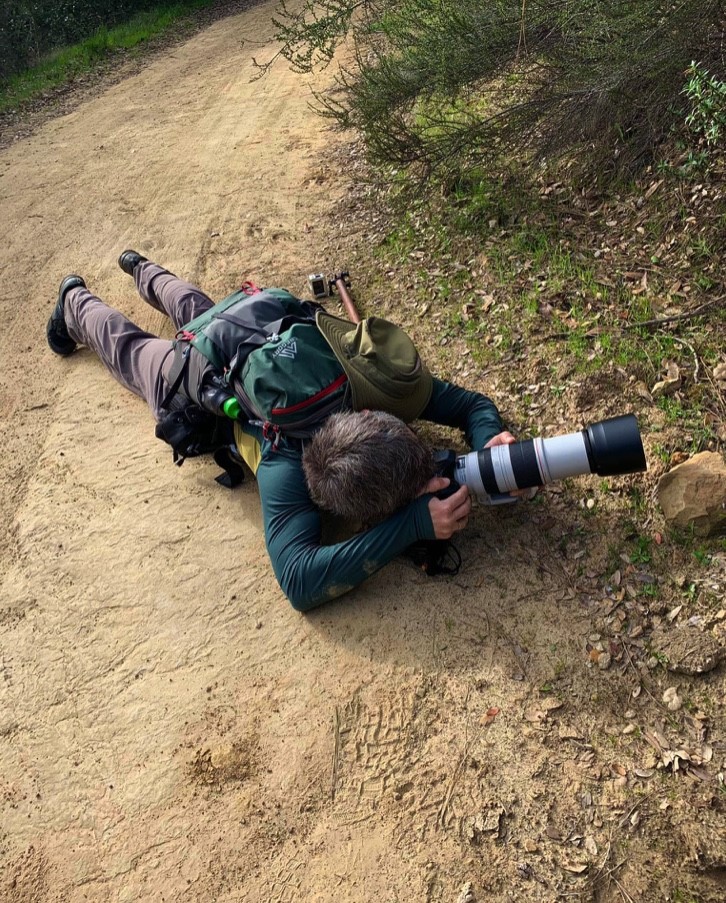 Kendall Oei is famous on the P-Team for his whole-hearted photography nerdiness. Photo by Karen James.

It was Kendall Oei, a long-term member of Save Mount Diablo, who managed to witness this dramatic moment during the 2021 nesting season while on duty for the Peregrine Team.

Summary of Peregrine Fledging This Year in the Mount Diablo Area

The P-Team monitored two peregrine nests this season, one in Pine Canyon and one in the remote cliffs of Mount Diablo. Seven chicks hatched in total. All were banded during their fluffy white dinosaur stage, but only the three chicks at the remote nest made it into the air. 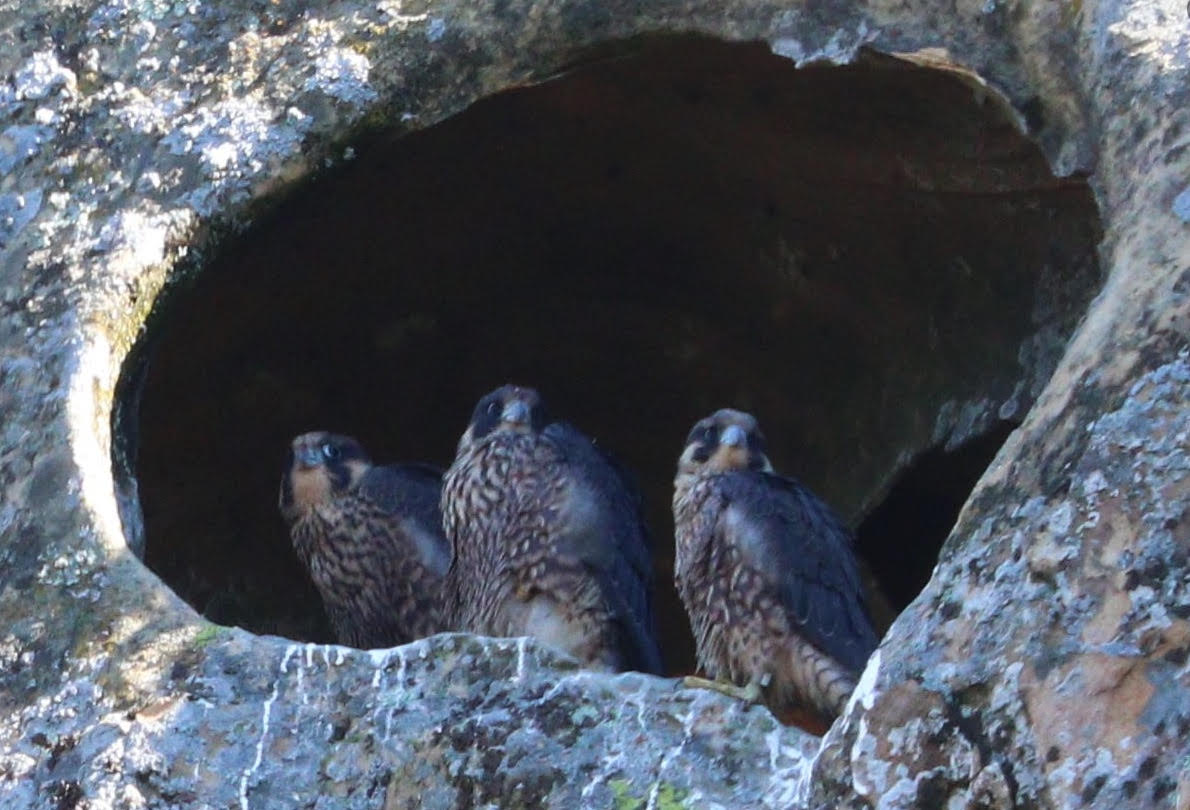 All three peregrine falcon chicks at the remote nesting site on Mount Diablo fledged within a three-day period, but often met to compare notes in or near their childhood home in the cliffs. You can see a band on the left foot of the bird on the right. Photo by Kendall Oei. 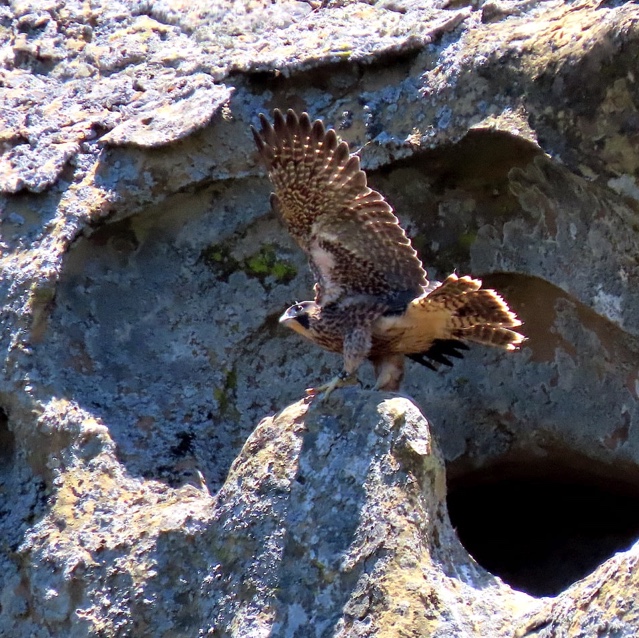 Ready to take flight, this young bird has released its grip on the rock, allowing it to take short hops in preparation. Photo by Joan Duffield. 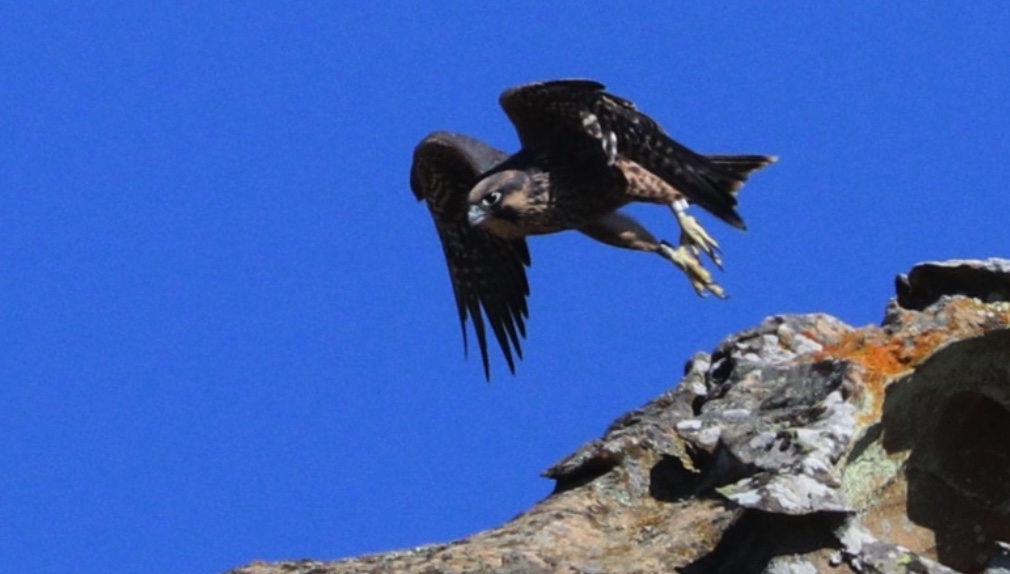 First flights are not much more than a downslope glide. This juvenile is launching toward a lone gray pine, where it landed safely but without so much as a suspicion of grace. Disheveled and puffing with the effort, it spent 15 minutes screaming for Mom and Dad to help somehow. A meal would have been comforting, for instance. Photo by Kendall Oei.

The loss of the other four from Pine Canyon happened at night, unobserved by the P-Team; but one body was recovered, and the cause of death was evident: another raptor had attacked, this time with deadly intent. At dusk or after dark, a great-horned owl swept into the nesting cavity on silent wings and killed all four nestlings.

Bringing Back the Peregrines

Save Mount Diablo was critical to the restoration of peregrine falcons on and around Mount Diablo beginning in 1989. Seth Adams helped bring together and fund a group of keen biologists and volunteers.

In the decades before, DDT had emptied the mountain of its peregrines, and prairie falcons moved in. Less affected by the pesticide because of a more varied diet, they became the falcon lords of the cliffs.

Prairie falcons became common enough that when the restoration team decided on a method of re-introduction, they chose to place young, captive-raised peregrines in prairie falcon nests.

Prairie falcons are excellent parents, though apparently no better than humans in telling one falcon chick species from another. Small head, gaping mouth, big feet, white pajamas. They fed every chick in the nesting cavity. 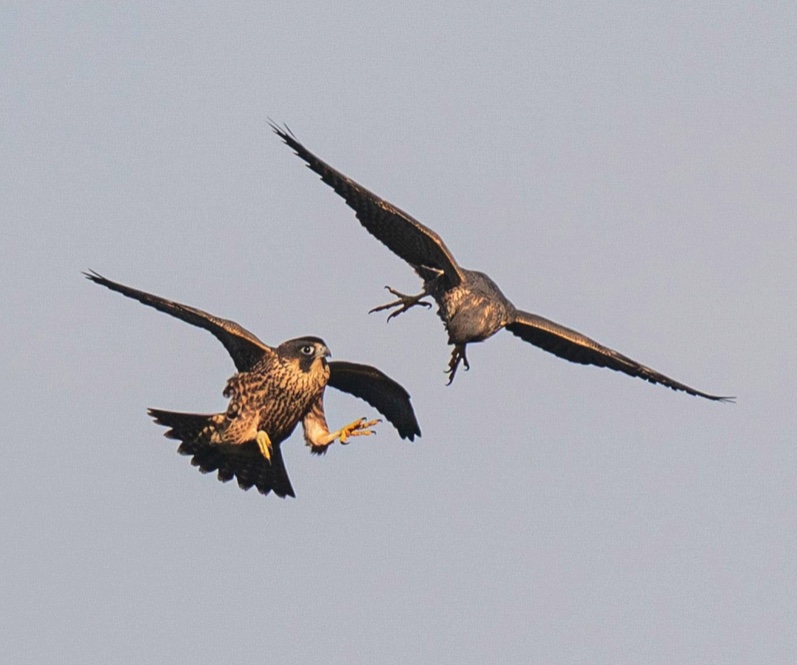 The three youngsters of the remote nest site spent days together acquainting themselves with aerodynamics. Here, two of the sibs practice the intricate moves of a mid-air exchange of prey, a critical skill all peregrines must master. Photo by Duy Dang.

Over four years, the restoration of the peregrines was so successful, and raptor relations so eternally competitive, that the peregrines drove their own saviors out of the neighborhood. 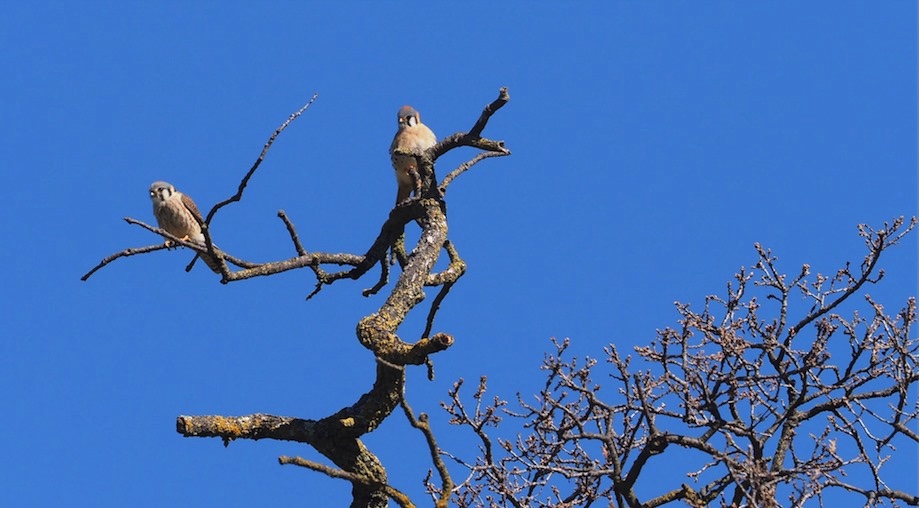 In both 2020 and 2021, American kestrels nested successfully in Pine Canyon, where they hadn’t been spotted before. The Kestrel Campaign, headed by Brian Richardson and funded in part by Save Mount Diablo, has helped restore the local population, which may be why they are suddenly present. More surprising to the P-Team is that in both years they nested right under the noses of the peregrines. Kestrels are the smallest of North American falcons, about the size of a robin, and can evade peregrines. They don’t like each other, but the chases go both ways, and the penthouse quality of the nesting sites in the cliffs make a place worth fighting for. Photo by Dirk Muehlner.

Prairie Falcons in Decline in the Mount Diablo Region

Now, for complicated reasons, it’s the prairie falcon that’s less often spotted in our skies. Their decline is rooted, most probably, in habitat loss, a long-term drought, and a large increase in the number of hikers and bikers in open spaces.

In the greater Bay Area, where there are now 35 monitored nest sites, that’s nesting pairs of peregrines totaling 70 birds, the causes may also include the resurgence of the species. 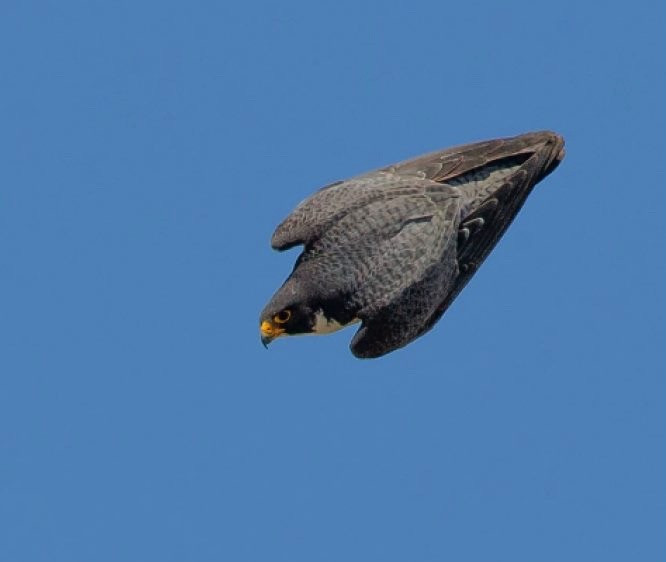 The iconic streamlined shape of a diving peregrine is a thing of great beauty. Peregrines hunt in the air, hitting their prey—smaller birds—at great speed. It’s a dangerous lifestyle.
Every feather must be in its place. Even a minor injury can mean death. Photo by Viet Tandinh.

Peregrines are slightly larger and heavier than prairie falcons. And though the two birds are thought to be equally speedy in flight, no other creature on earth moves faster than a stooping peregrine: 200 miles per hour and up.

If prairies and peregrines overlap in a competition for territory and the peregrine gets the high ground—make that “the high air”—the prairie falcon will lose the battle. 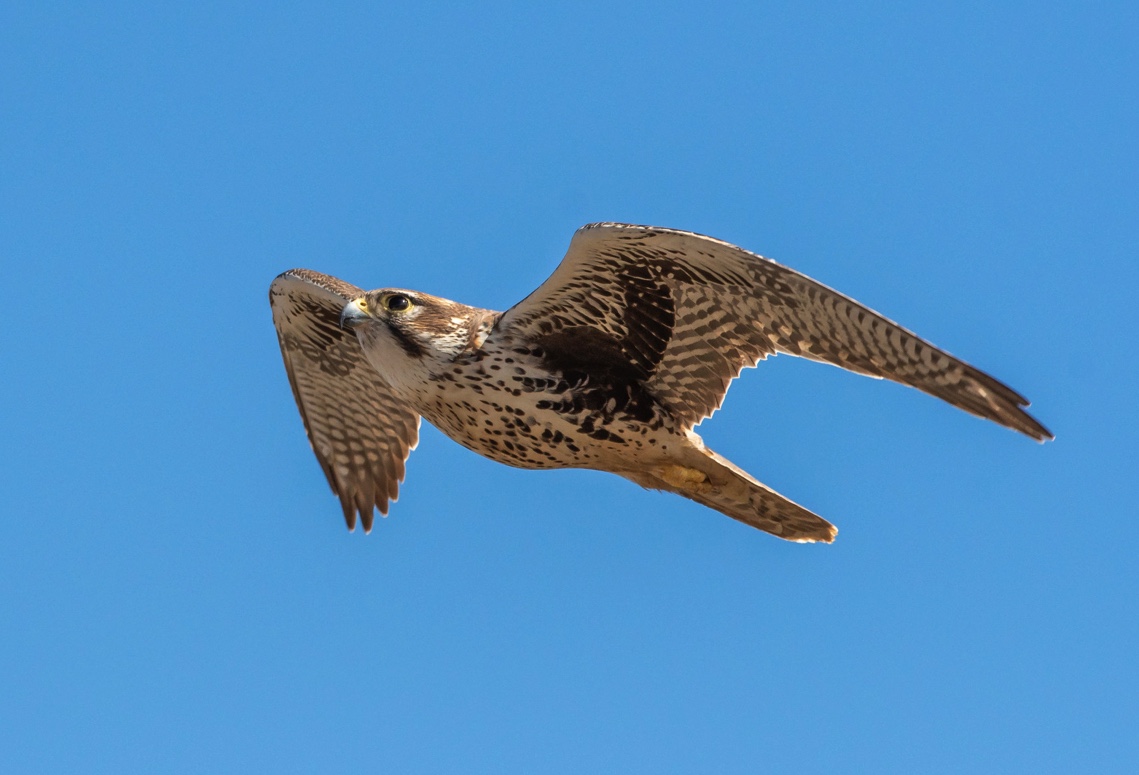 Prairie falcons are only a mite smaller than peregrines, and may be just as fast but for the peregrine’s unique 200 mph stoop. Visually, they look like milk chocolate on the wing. Falcon-watchers look for the the paler underwings, tail, and head markings, but in silhouette it’s tough to tell the difference. The habitat can help, but in the rocky areas of the Diablo Range, they overlap and compete head to head, or talon to talon, as Kendall Oei saw in the 2021 season. Photo: Bruce Rosendahl / CC BY-NC

Raptors rarely feel at ease when other raptors are near. They are uneasy even if, as with the great-horned owl and the peregrines, the birds aren’t directly competing for prey and are active at the opposite ends of the day.

For at least 10 days prior to the attack, the P-Team knew that a great-horned owl was lurking nearby. It’s typical for this large and fierce predatory bird to plan an attack on fellow raptors, even over weeks, P-Team advisor Jenny Papka of Native Bird Connections told the team.

Once peregrine chicks fledge, they have little to fear from owls: they are mobile and fast, even as youngsters. But four fat, beer-bellied, pre-flight nestlings deep in a rocky cavity are easy to trap.

The P-Teamers, having monitored the Pine Canyon birds for seven years, have put together this likely course of events on that evening at the end of May.

The owl had spent the day in a small cavity near the foot of the very cliff the peregrines had chosen as their home for the season. The peregrine cave was large and commodious; the owl’s little larger than itself. 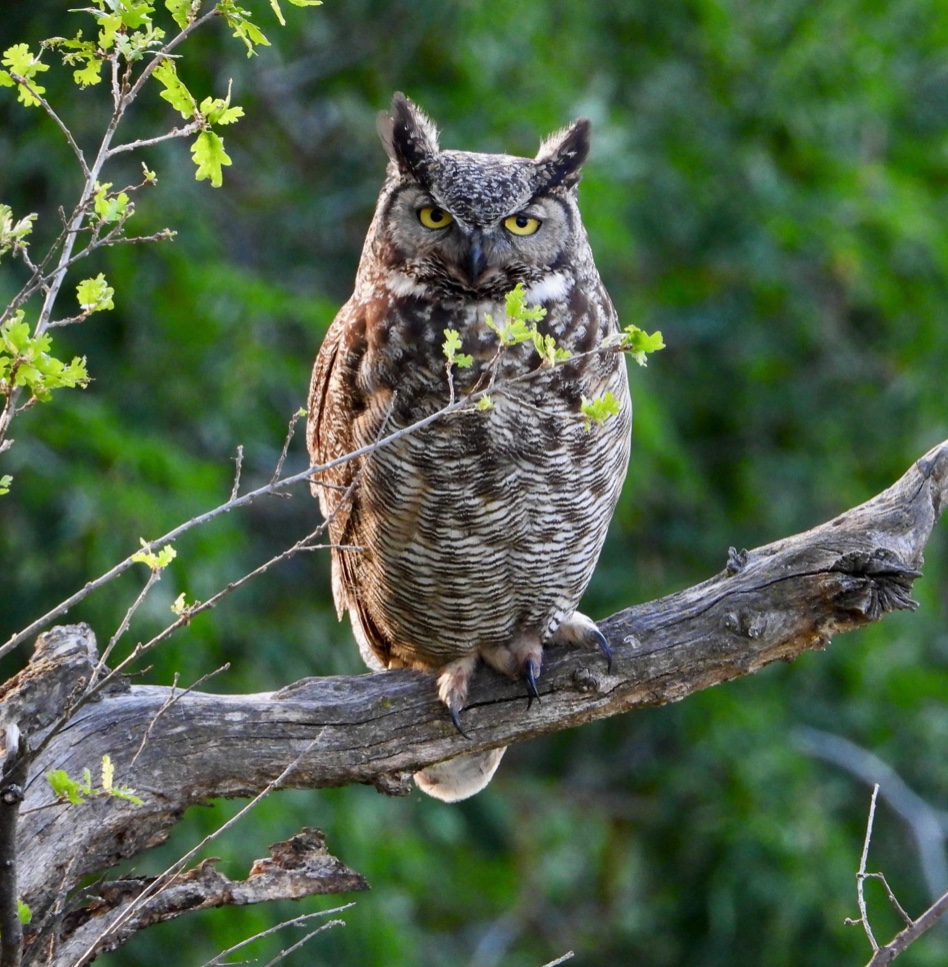 Great-horned owls are the immemorial foes of peregrine falcons. Though their prey base is not the same, nor the time of day they hunt, the resources that feed their prey bases are the same: water, food, cover, and a place to safely nest. This inevitability perpetuates a robust competition between them. This bird, photographed by P-Teamer Wally De Young this season, lives close to the Pine Canyon peregrines.

The peregrines knew the owl lay in wait, but they had no way to dislodge it from its fortification without risking grave injury.

The owl bided its time. One evening, the peregrine parents retired for the night in their separate bedroom cavities close to the nest. They were exhausted after a day of feeding and watching over their quartet of chicks.

As they drowsed, the owl’s powers grew. Excellent night vision, silent flight, and near proximity all came together in a powerful array.

The owl flushed from its cubbyhole and flew up just a hundred feet, brushing the cliff with its wings. It landed at the threshold of the peregrine cavity, broad wings out to block the opening. The peregrine chicks cowered together at the back of the cavity, making an easy target.

It was all over fast. The peregrine parents would have tried frantically to intervene, but a great-horned owl is a fearless, dangerous foe, quite capable of mortally wounding the parents too.

The peregrine parents withdrew at some point, wisely. In the aftermath, the P-Team watched carefully for signs of injury in them, but were relieved to see two healthy birds. 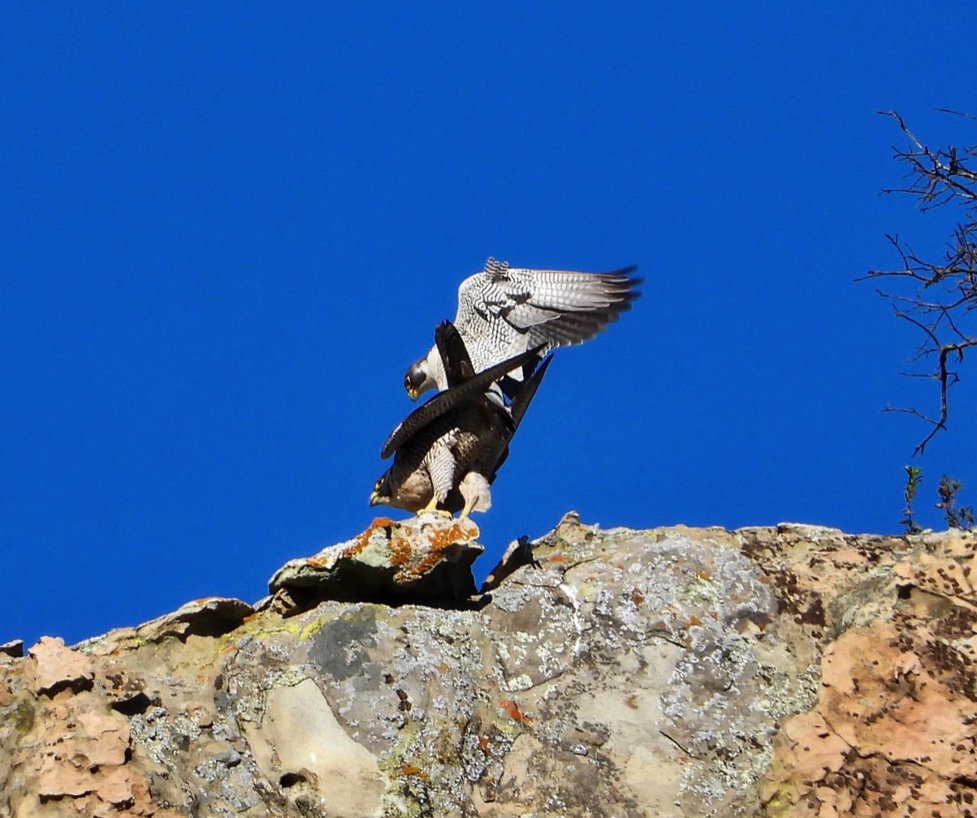 Female raptors are all larger than their partners, though it’s not easy to see until they get together. The Pine Canyon peregrines copulated here and there, hither and yon, all day long, perhaps to help train the P-Teamers in judging the size difference. Photo by Wally De Young.

The parents are still in residence in and around Pine Canyon. And they’re still interacting with one another in the broader Mount Diablo area. 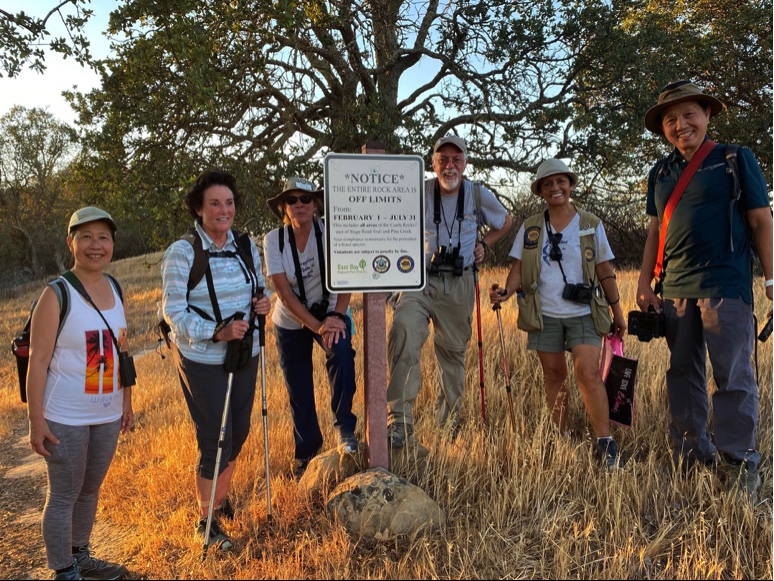 Some of the team’s core members got together just after the nesting closure season ended for a hike in the Castle Rocks. Left to right: Lan Dang, Joan Duffield (member of Save Mount Diablo ’s Land Committee), Patricia Yamshon, Michael Browne, Rosita Ortega Harvey, and Duy Dang. Photo by Kathy Siegel.