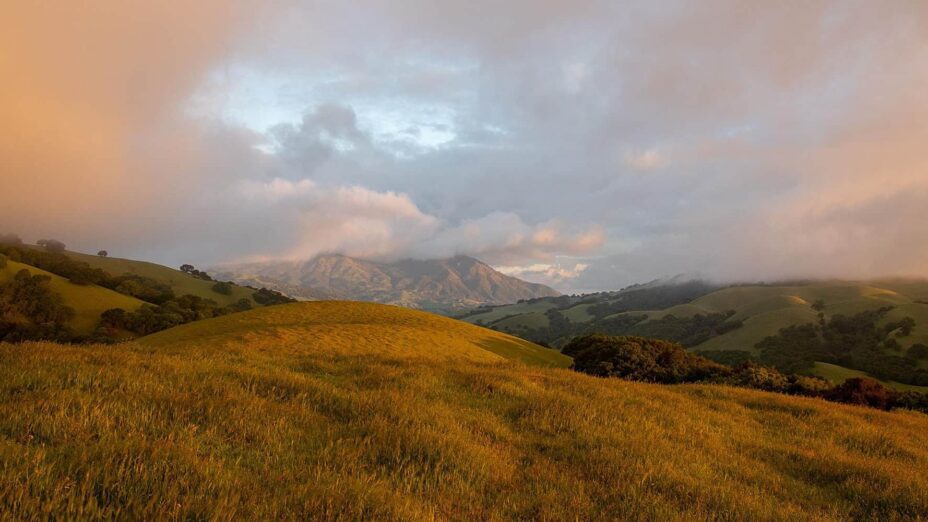 “Mount Diablo, a mass of purple in the morning. Nature is always lovely, invincible, glad whatever is done or suffered by her creatures. All scars she heals; whether in rocks or waters or sky or heart.”

Mount Diablo is the centerpiece of Contra Costa County and a major landmark of the East Bay Area. It’s a sanctuary for people and wildlife. It’s a reminder of the healing power of nature amongst nearby urban areas. For many, just looking at it evokes a feeling of being home.

In June, 2021, Mount Diablo State Park is celebrating  its 100th anniversary as a state park. It’s a tremendous conservation achievement thanks to nearby residents who saw the beauty of the mountain, and decided it needed to be protected. 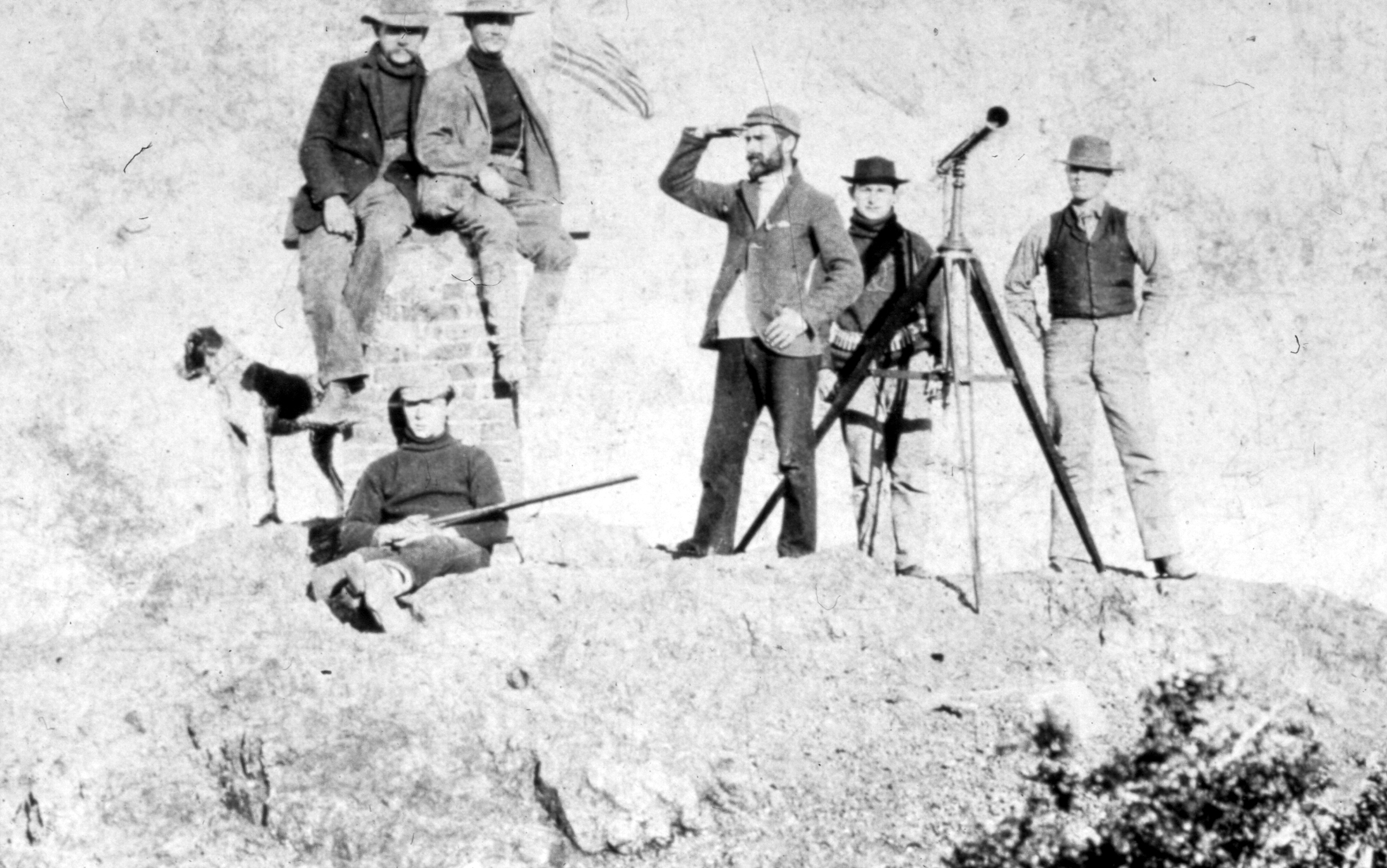 Burgess was business partners in Sonoma County with Walter P. Frick, who played a critical role in the creation and expansion of Mount Diablo State Park. Together, the men were experts in complex real estate speculation.

From 1912 to 1915, Burgess’s group built Mount Diablo Scenic Blvd. so that cars could reach the summit. It was during those years that Burgess announced his ambitious plan for Mt. Diablo Estates, one of Mount Diablo’s first conservation threats. Burgess envisioned Mount Diablo being an exclusive residential park. Lots would be sold across the mountain that would be built into homes.

In one entertaining episode of Diablo’s history, Burgess went on a four-hour horseback ride to the summit of Mount Diablo with the legendary William Randolph Hearst. The entire way up, the two were striking up conversations of development plans for Mt. Diablo Estates. Upon reaching the top, however, they became silent.

The view was awe-striking. Burgess recorded in his memoirs that they could see the smokestack rising from a recently erupted Mount Lassen.

It may have been Hearst who broke the profound silence, saying, “This is a wonderful view, and should be the site of a castle-like building. It is worthy of Julia Morgan’s skill. (Morgan was his architect on the San Simeon Castle.) Soon after, plans were drawn for the castle-like hotel. It was dubbed Torre del Sol, Tower of the Sun. 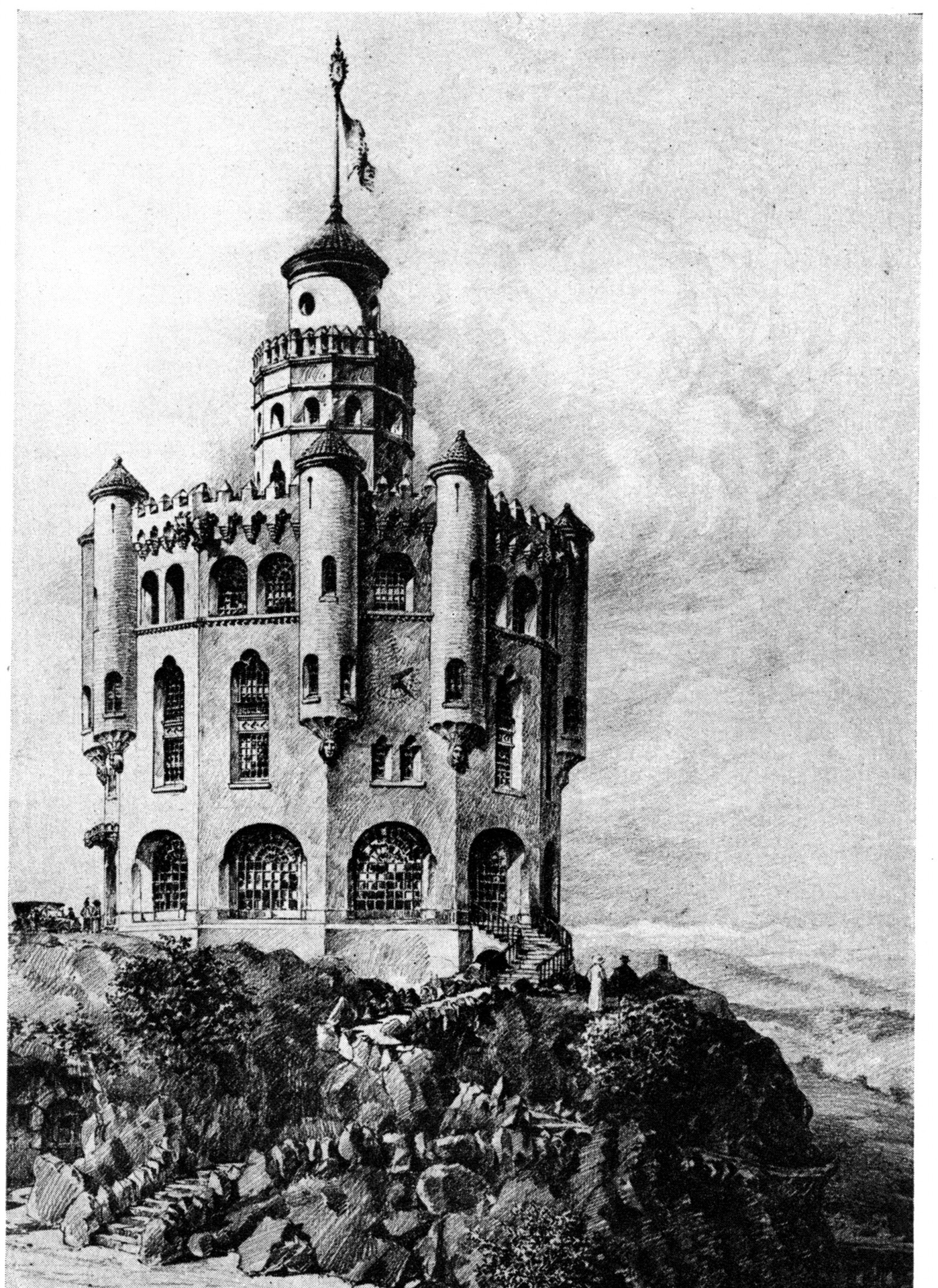 A few years later, World War I would plague the world, leaving Burgess and the Mount Diablo Development Company bankrupt. Although the castle was approved by the Department of the Interior, the plans were discarded. Burgess’s plans to build on Mount Diablo also fell by the wayside. 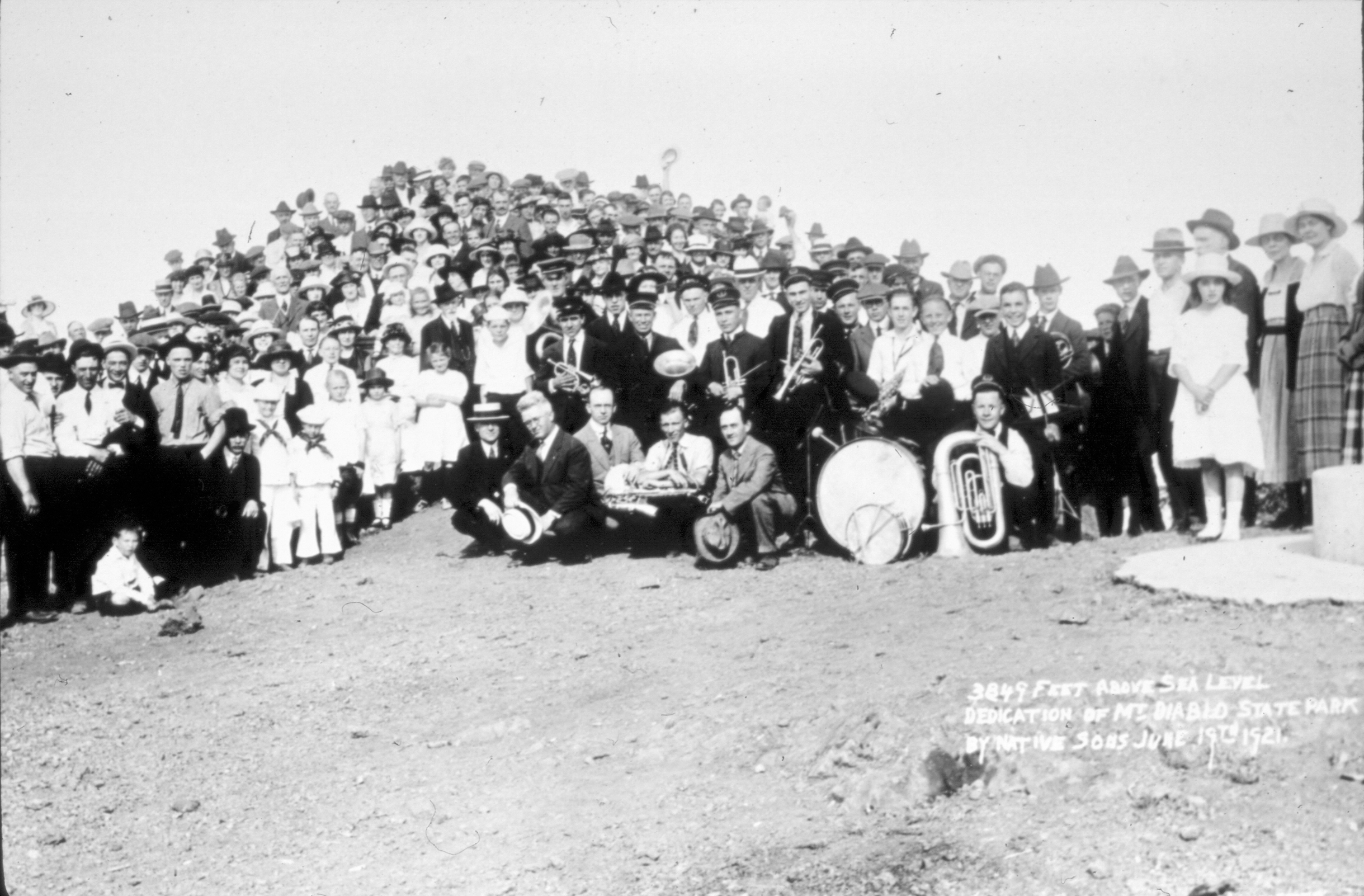 Today, there are close to 300 state parks in California, and Mount Diablo State Park was one of the first. Mount Diablo was originally a “State Park and Game Refuge.” It was only 630 acres when initially conceived and also didn’t have any land purchased for it until later.

The park was officially dedicated on Sunday, June 19, 1921, despite not having any land purchased for it yet. Mount Diablo was one of seven state parks created before the establishment of the California State Park System. It wasn’t until 1927 that the state park system was established. 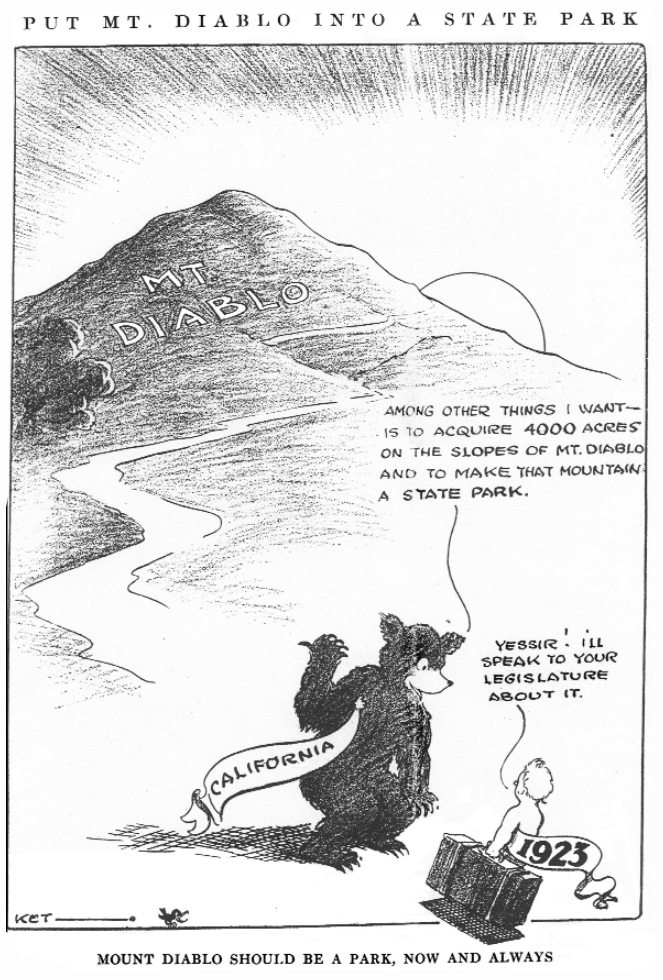 From the Oakland Tribune, courtesy of Save Mount Diablo

After the park was dedicated, the Mt. Diablo State Park Commission was formed, and a citizen-organized Mount Diablo State Park Council began pushing for the implementation of a bill that would create funds to acquire land for the newly founded state park. Citizens were eager to implement the park and expand it from its modest 630 acres.

It was also about 1930 that future Save Mount Diablo Co-Founder Dr. Mary Bowerman began researching the botany of Mount Diablo.

Parks and Cities Begin to Grow

Leading into the 1930s, Walter P. Frick owned much of the land across the mountain. However, he was harshly hit by the Great Depression and needed to raise some money.

He began selling land to the state park. These acquisitions were critical; they included popular and vital spots like Rock City, Fossil Ridge, and Juniper, and right of ways for the roads. In total, there were six acquisitions from Frick’s Mount Diablo Company, which totaled 2,003.5 acres.

On April 26, 1931, Mount Diablo State Park was dedicated a second time. Also in the 1930s, the Oakland Bay Bridge and the Caldecott Tunnel were completed, making the East Bay much more accessible. In the following years and decades, the population surrounding Mount Diablo increased dramatically.

Contra Costa had just 18,000 citizens in the 1900s, with 645 in Concord. By the 1960s, the population boomed to include over 36,000 residents in Concord and more than 400,000 in Contra Costa County. With growing population numbers, no urban limit lines, and thousands of acres of wild lands at stake, the need for conservation became dire. 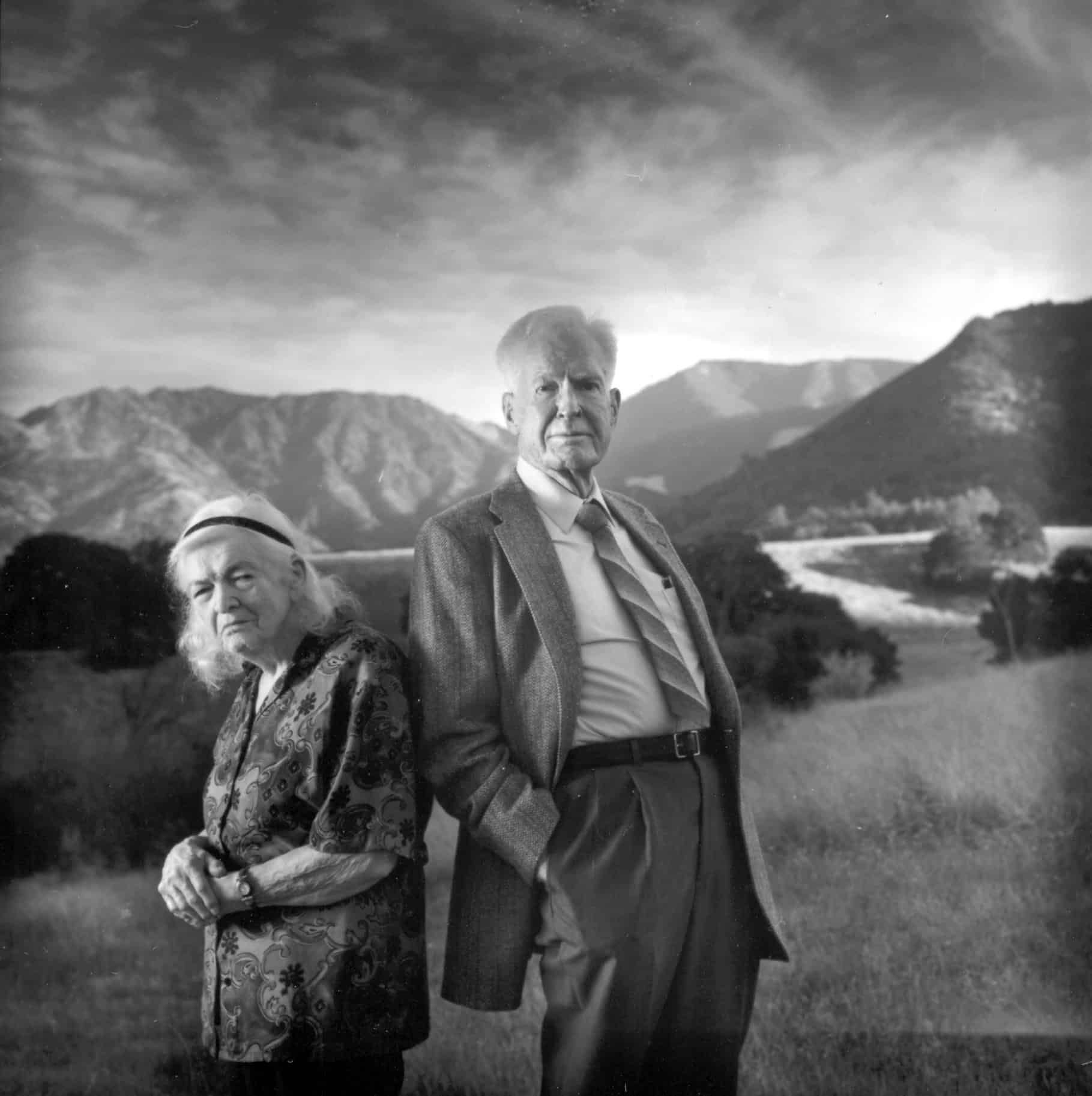 At meetings of local conservation groups, Dr. Mary Bowerman, a student of the mountain’s botany since 1930 and author of The Flowering Plants and Ferns of Mount Diablo, California, would rise to ask, “What can we do to help save Mount Diablo?”

Finally, Arthur Bonwell, Chairman of the Mount Diablo Regional Group of the Sierra Club, responded, “Why don’t we start a group to focus on expanding the State Park?” Bowerman provided the inspiration, Bonwell helped get things organized, and on December 7, 1971, a first meeting was held.

Dr. Mary Bowerman and Art Bonwell became co-founders of Save Mount Diablo. At the time Save Mount Diablo was formed, Mount Diablo State Park was just 6,788 acres. However, the public perception was that the state park encompassed the entire mountain.

Most of the state park included the area from the summit to Rock City, and most other places on the mountain were difficult to access. There were no staging areas or trailheads.

More importantly, without protection, the mountain was still under threat of development. Environmentalists were becoming increasingly concerned when subdivisions started creeping up the foothills.

Robert Burgess had originally envisioned Mount Diablo as an exclusive residential neighborhood in the early 1900s, and in the latter half of the 20th century, that vision of development still remained a possibility.

From Save Mount Diablo’s beginnings, we’ve responded to development applications. Our initial goal was to protect and preserve Mount Diablo, and with growing human population numbers, it was a critical time.

By 1972, BART reached the interior of Contra Costa County, increasing development pressure. In these early years, Save Mount Diablo helped to preserve the mountain’s northern canyons (Mitchell, Back, and Donner Canyon).

By 1976, Save Mount Diablo made our first acquisition, a 117-acre property near Morgan Territory and Marsh Creek known as The Corner Piece, which was then four miles from the state park.

From a single park and 6,788 acres in 1971, high on the mountain’s slopes, Diablo’s protected lands have grown dramatically. Today, Mount Diablo State Park is about 20,000 acres in size, plus more than 50 parks and preserves are found on and around Mount Diablo, stretching from Walnut Creek to Brentwood and Livermore, totaling more than 120,000 acres.

The Future of the Mountain 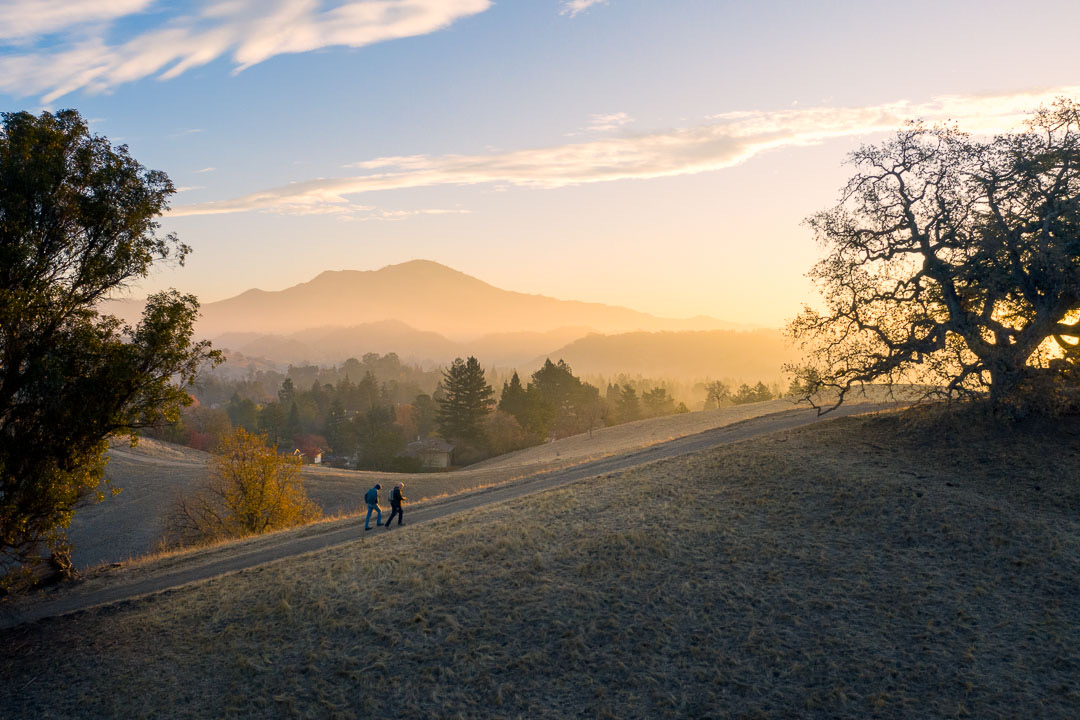 Mount Diablo has been a sacred place for thousands of years and remains so. Protecting its wild lands has been an extraordinary undertaking, and there is still much to be done. The size of protected landscapes in the Mount Diablo region has grown greatly throughout the last 100 years.

Predicting the future of the mountain, and of parks, sometimes feels like a monumental challenge. New threats and projects are being proposed, and the climate crisis creates uncertainty. However, there is a lesson in the past that offers a glimpse into the mountain’s future.

There’s always been a fierce love for Mount Diablo. Our work builds on the conservation legacy started by the residents who lived around Mount Diablo. They were no different than us; they were hikers, conservationists, equestrians, bird watchers, and people who just love to look at the mountain.

As the park grows, and more people find the shared beauty of Mount Diablo, there is good reason to remain optimistic. People always strive to protect the things they love, and Mount Diablo is deeply beloved.