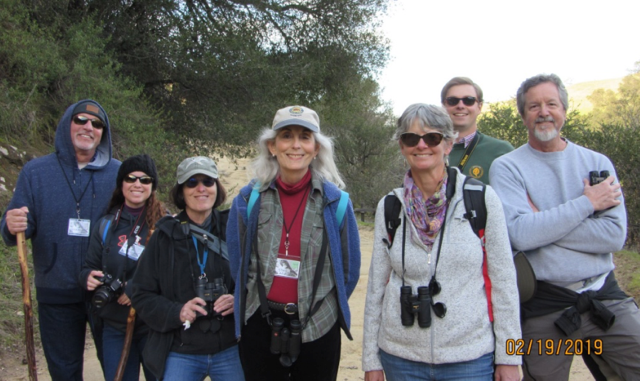 Photo: The Peregrine Team on a training hike in Pine Canyon

Peregrine falcons now nest in the cliffs of Pine Canyon, a direct result of ongoing conservation efforts since 1970, when the birds were first listed as an endangered species.

The birds’ dwindling population was a consequence of widespread use of the pesticide DDT. Use was so prevalent that peregrines had disappeared as a breeding species from around Mount Diablo in the 1950s.

By the mid-2000s, peregrines had returned to the area and even some nesting pairs had been observed, likely because of the steep cliffs that provide ideal nesting platforms for these birds. However, annual park visitation has increased dramatically since the beginning of the 21st century.

This increase prompted Mount Diablo State Park and Diablo Foothills Regional Park to delineate a nesting closure zone in Pine Canyon. Park staff hoped that the falcons would not be deterred by human presence from nesting there.

Despite the big jump in human visitation, the number of successful fledglings seems to be holding steady, likely due to the closure and the work of the Peregrine Team to educate park visitors. Fourteen chicks fledged in a 13-year period (2008–2020), averaging slightly more than one chick per year.

Initially, the Peregrine Team was created to keep people from entering the nesting zones. Over the years, however, the team’s role has evolved.

In an effort to help visitors more deeply understand why they should avoid climbing in the area and allow the birds to nest, the team now assumes the roles of naturalists and citizen scientists, aiming to educate rather than simply police.

The team plans to expand the program to other parts of Mount Diablo, having recently formed a group of backcountry observers who will confirm where peregrines are on the mountain, as well as recording prey species.

Learn more peregrine falcons: Watch this video about the return of peregrines to Mount Diablo by Joan Hamilton.