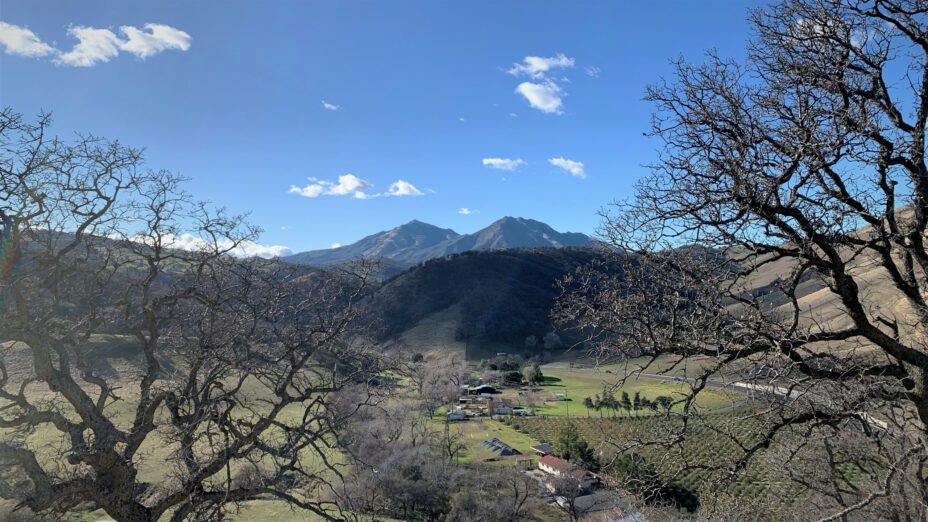 Race against the Weeds 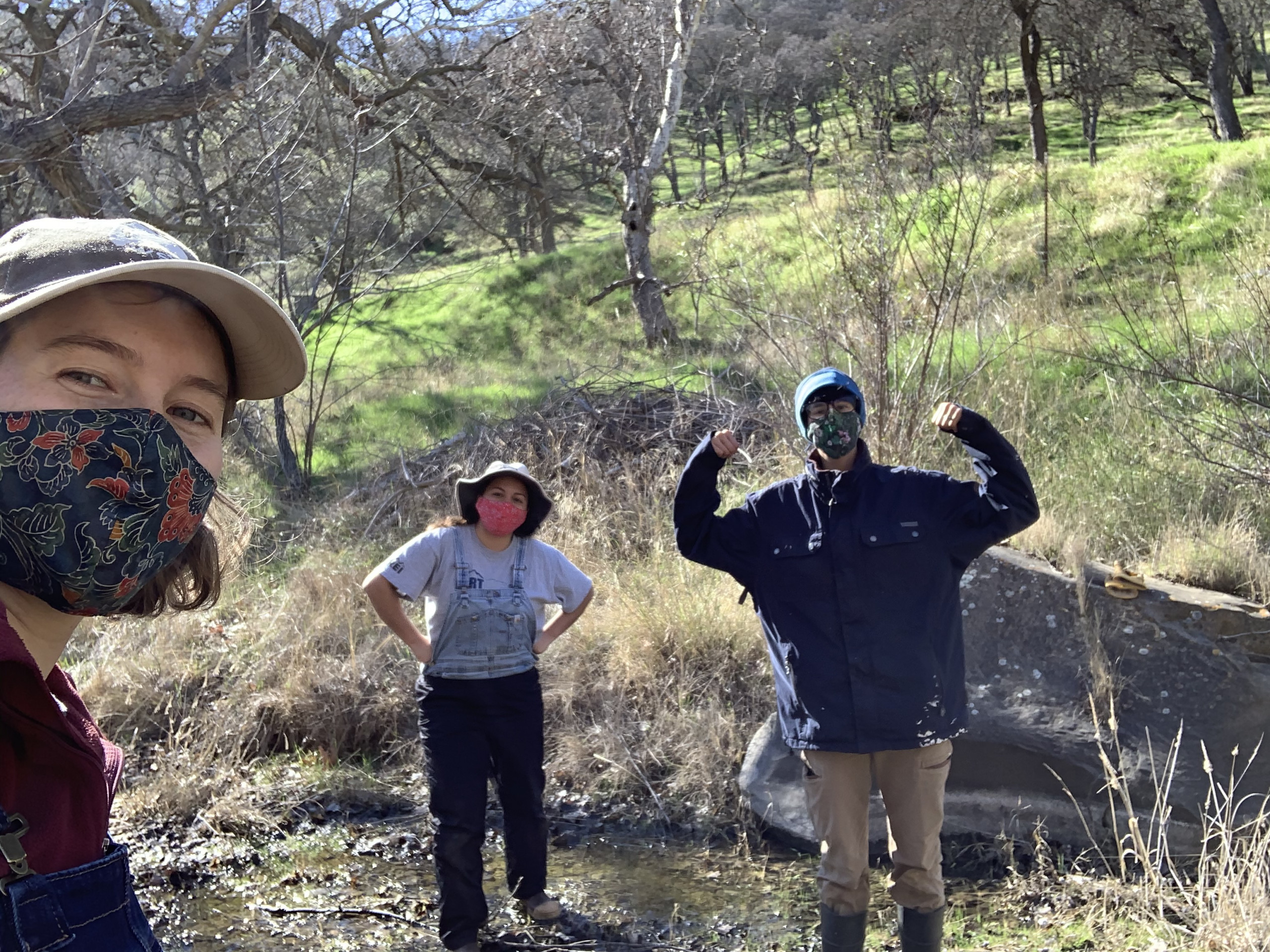 Because of the change in the county health order at the end of January, staff have been able to work together in the field again. As a result, not one, not two, but three pairs of hands tackled poison hemlock (Conium maculatum) removal at Marsh Creek 1, 4, and 7.

Now is a great time to remove seedlings that have yet to establish a strong taproot. Without that taproot, it’s easier to slip them out of the soil with mechanical methods. This species of invasive plant ranks at a Cal-IPC moderate rating because of its allelopathic characteristics and subsequent ability to prevent natives from growing nearby. That ability enables it to create a monoculture around itself.

Staff also removed a patch of white horehound (Marrubium vulgare) at Curry Canyon Ranch near the dumpsters. Horehound produces a deep taproot in grasslands, and is not a preferred forage plant when other tastier species are around, giving it an advantage with access to water sources.

Staff have also noticed plenty of various thistle seedlings that also impose a risk to surrounding native ecosystems. For weed removal, staff bag and dispose the heartier seedlings that have the potential to resprout, and will leave other less invasive species to compost on site. 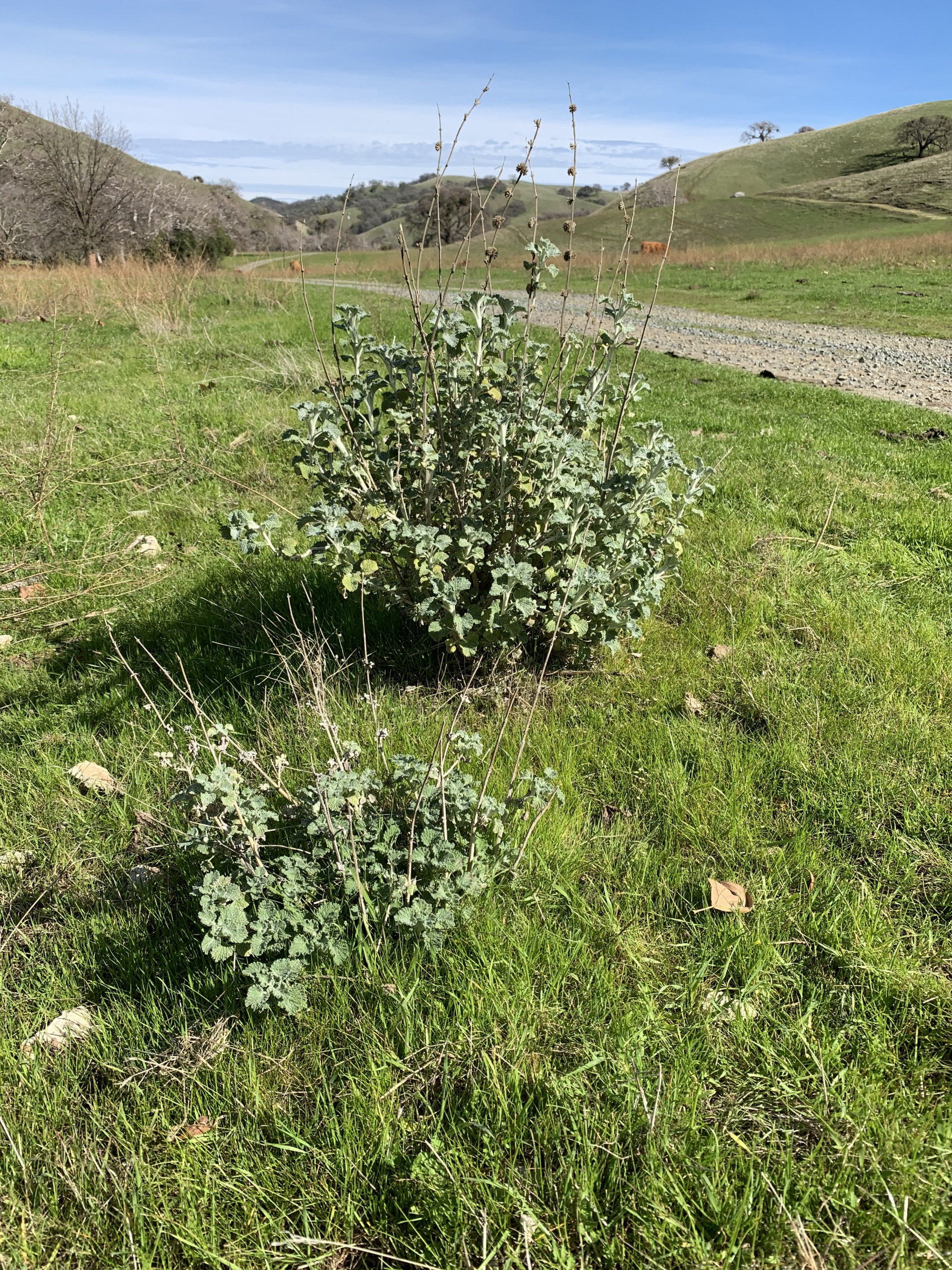 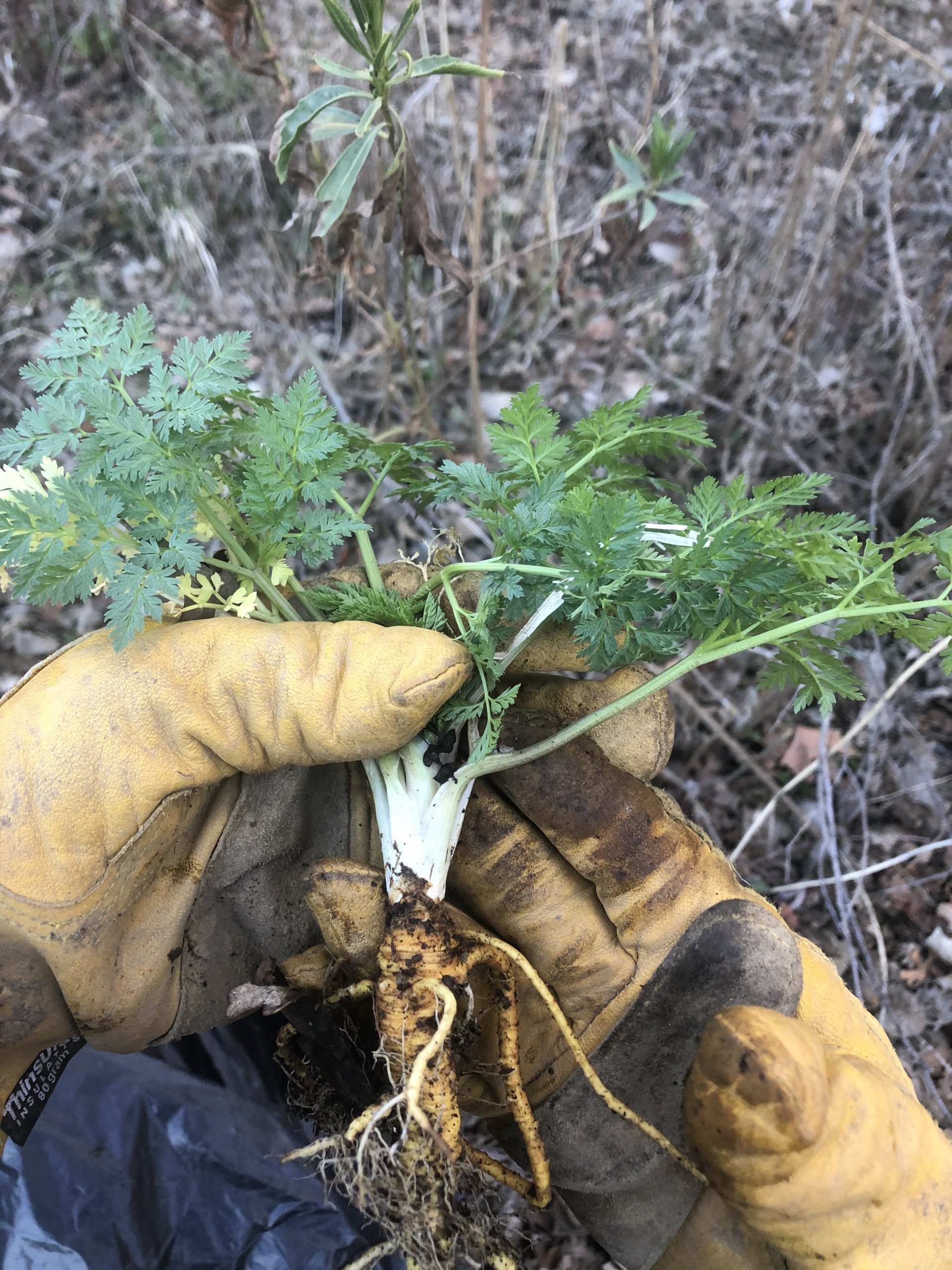 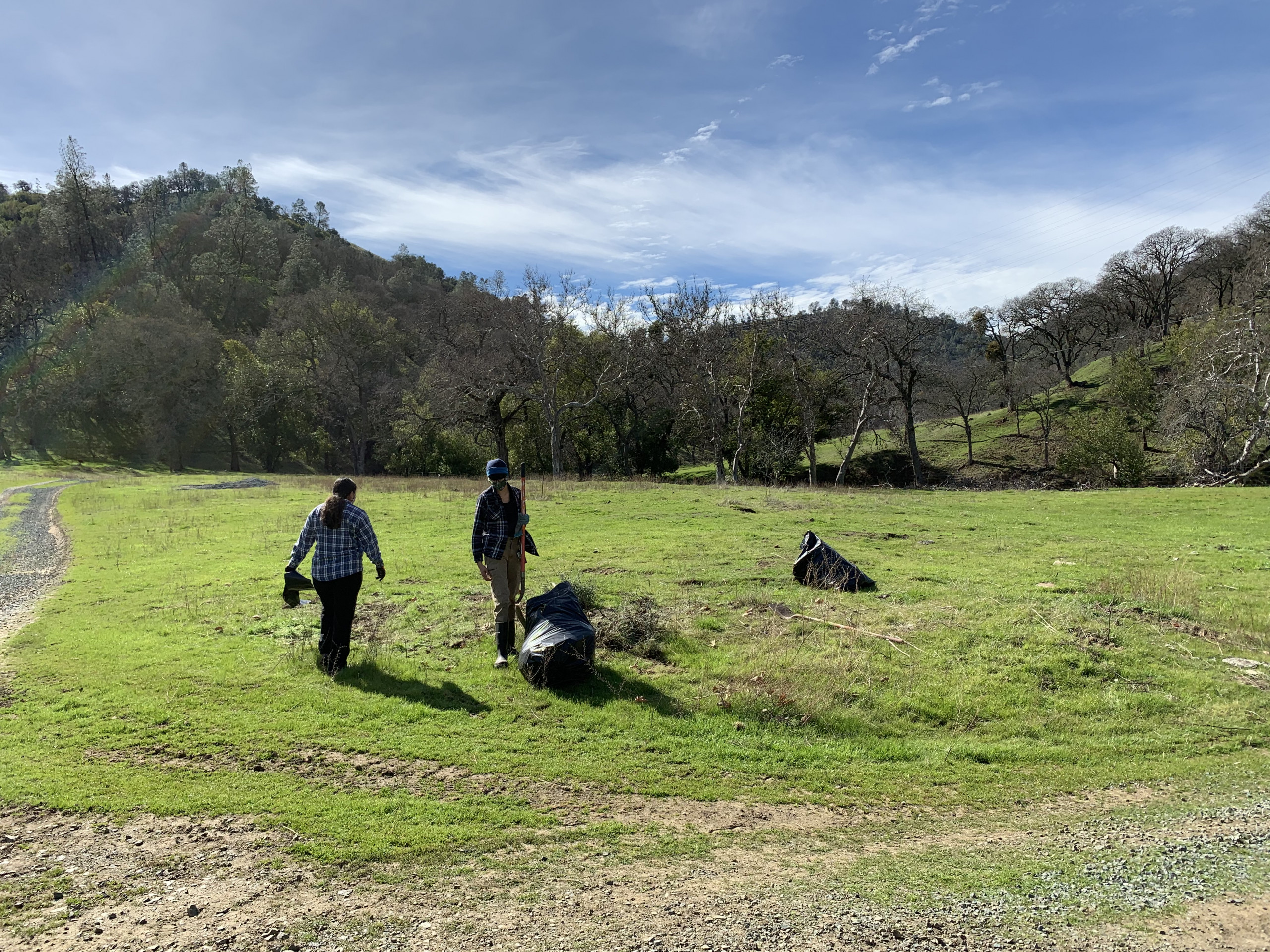 In January, readers had the option to complete a survey question that asked what they had been noticing outside. Some reflected on flora and fauna, including a rattlesnake sighting and anticipating buttercup blooms. We had snow on Mount Diablo, surrounded by low cloud cover. Folks were also noticing all the people enjoying the outdoors and how important it is right now to have local wilderness to explore. Thank you to everyone who contributed! 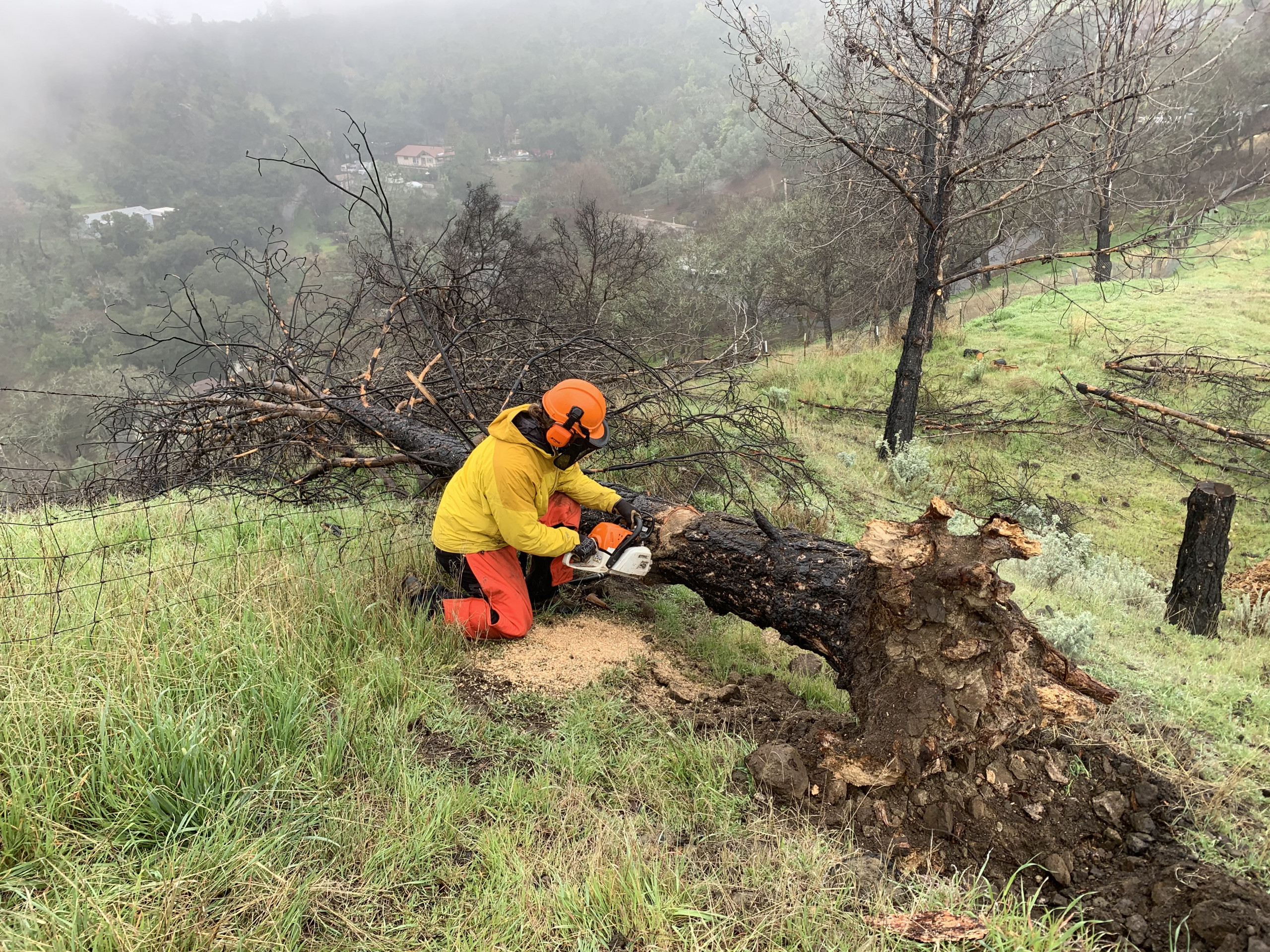 Staff conducted a storm patrol on a few properties after the rainy conditions passed to ensure safety and access to main fire roads. Fallen trees, road erosion, and downed fences are a few checklist items we consider on these property visits.

The high-speed winds this month downed trees on multiple properties in inconvenient locations. Trees fall naturally for a number of reasons, including loose soils, high winds, and rotten root systems. After they fall, trees provide habitat for many plants and animals as they decompose, but when they fall on infrastructure such as a road or fence, then we step in, clearing the debris.

A few trees fell on fences at Curry Canyon Ranch and Marsh Creek 6. Our caretaker, Venny, fixed the two fallen trees at Curry Canyon Ranch, one of which had landed on a section of cattle mitigation fencing that had been newly installed to protect the creek. Over at Marsh Creek 6, staff incorporated the fallen tree into a chainsaw training. This particular pine was scarred from the 2018 Marsh Fire and showed evidence of bark beetles. 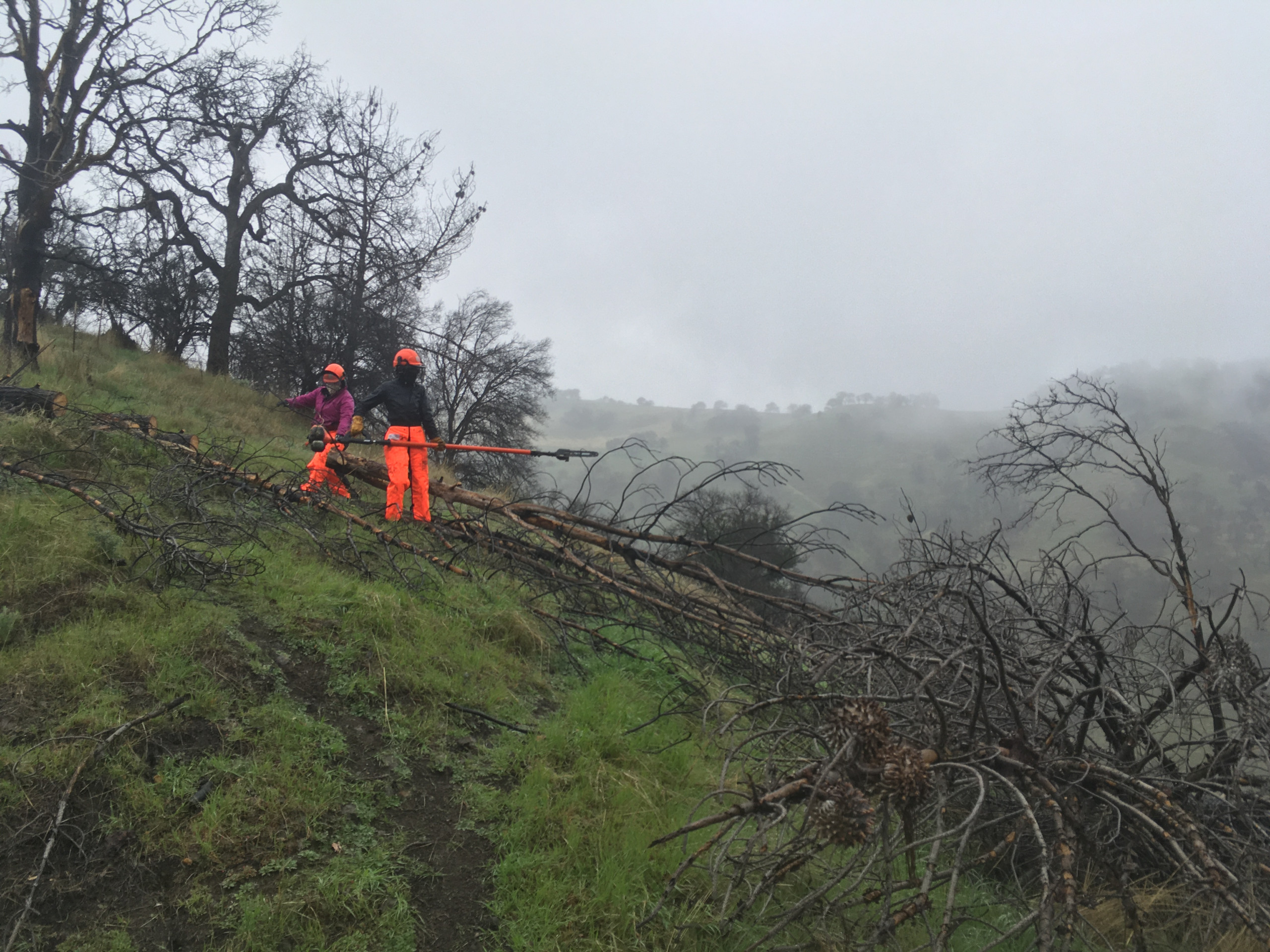 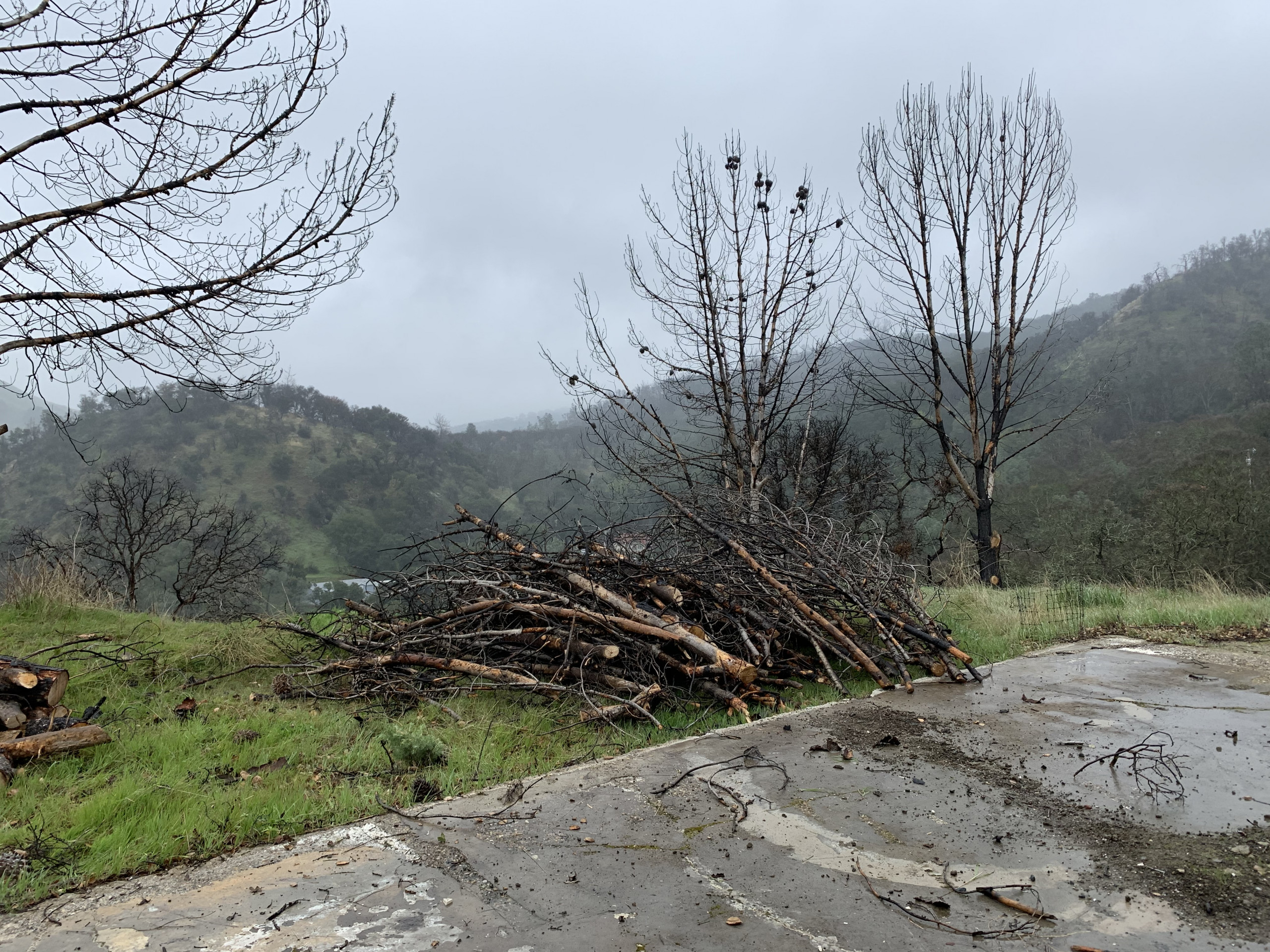 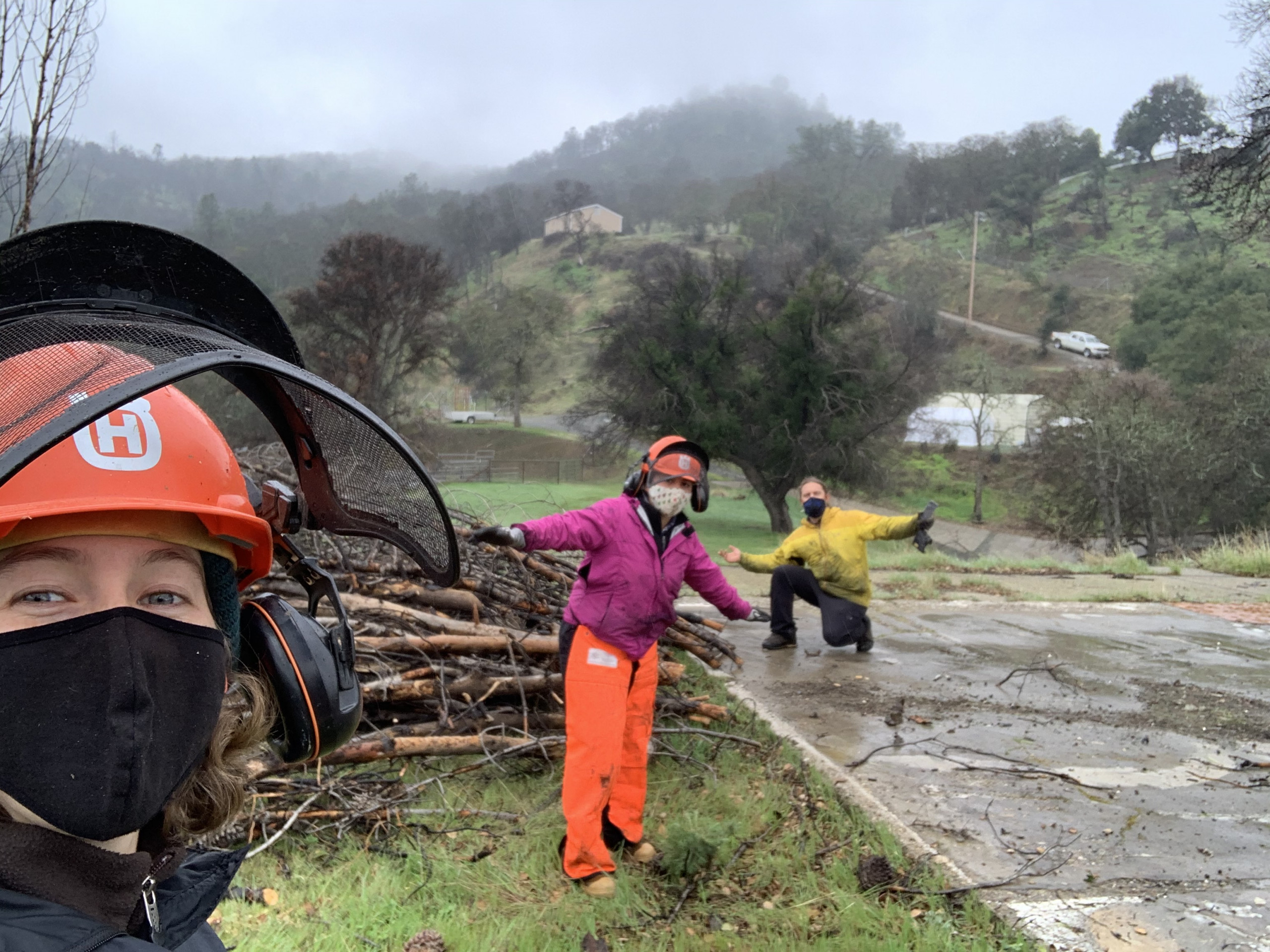 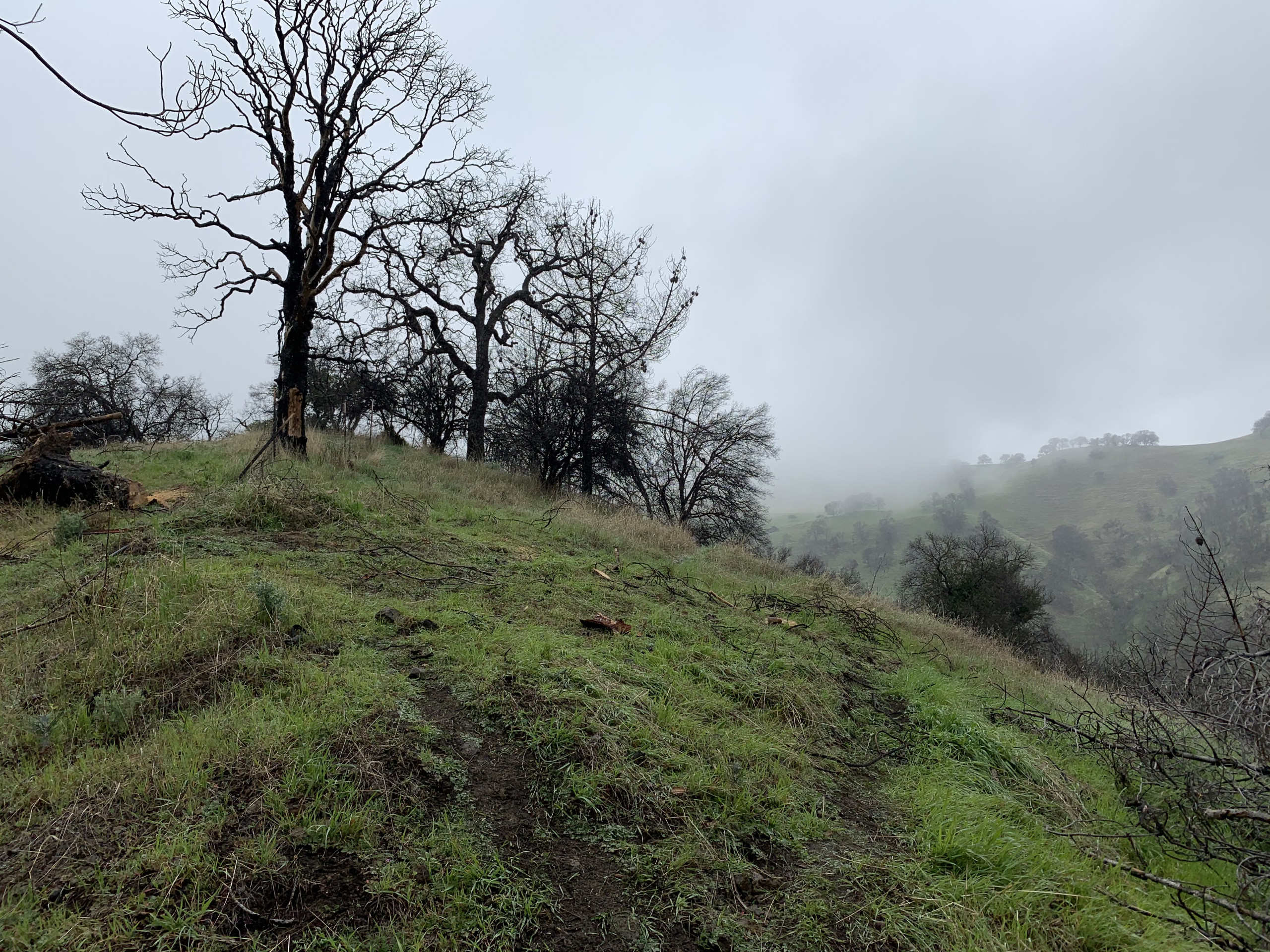 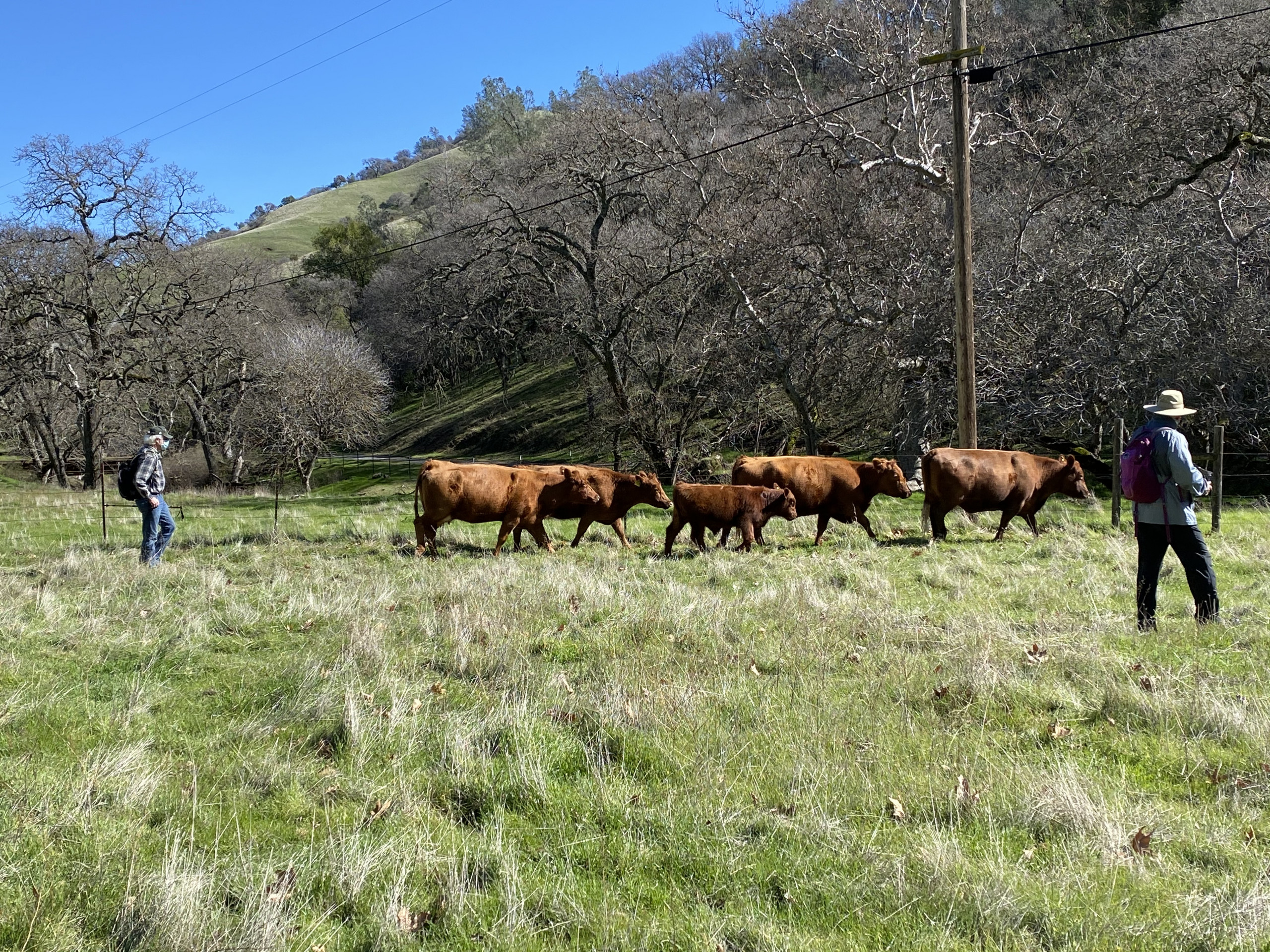 One of our ranchers at Curry Canyon Ranch has had their cattle grazing in the valley the past few weeks, and multiple times the cattle have been found outside our property within Mount Diablo State Park. On one occasion, as our steward caught the cow-calf units beyond property boundaries, a few hikers in the state park were reaching their turnaround point on Curry Canyon Road and helped corral the cattle back through the pedestrian gate.

It seemed a mystery how the animals kept getting into the state park. A hidden gap in the fence appeared to be the gateway out, but more likely, the cows are walking right over the cattle grate, which has filled with sediment over time. Staff are working on clearing out the grate and repairing the fence to stop future wandering cows. And as it turns out, those helpful volunteers are Haley’s parents! 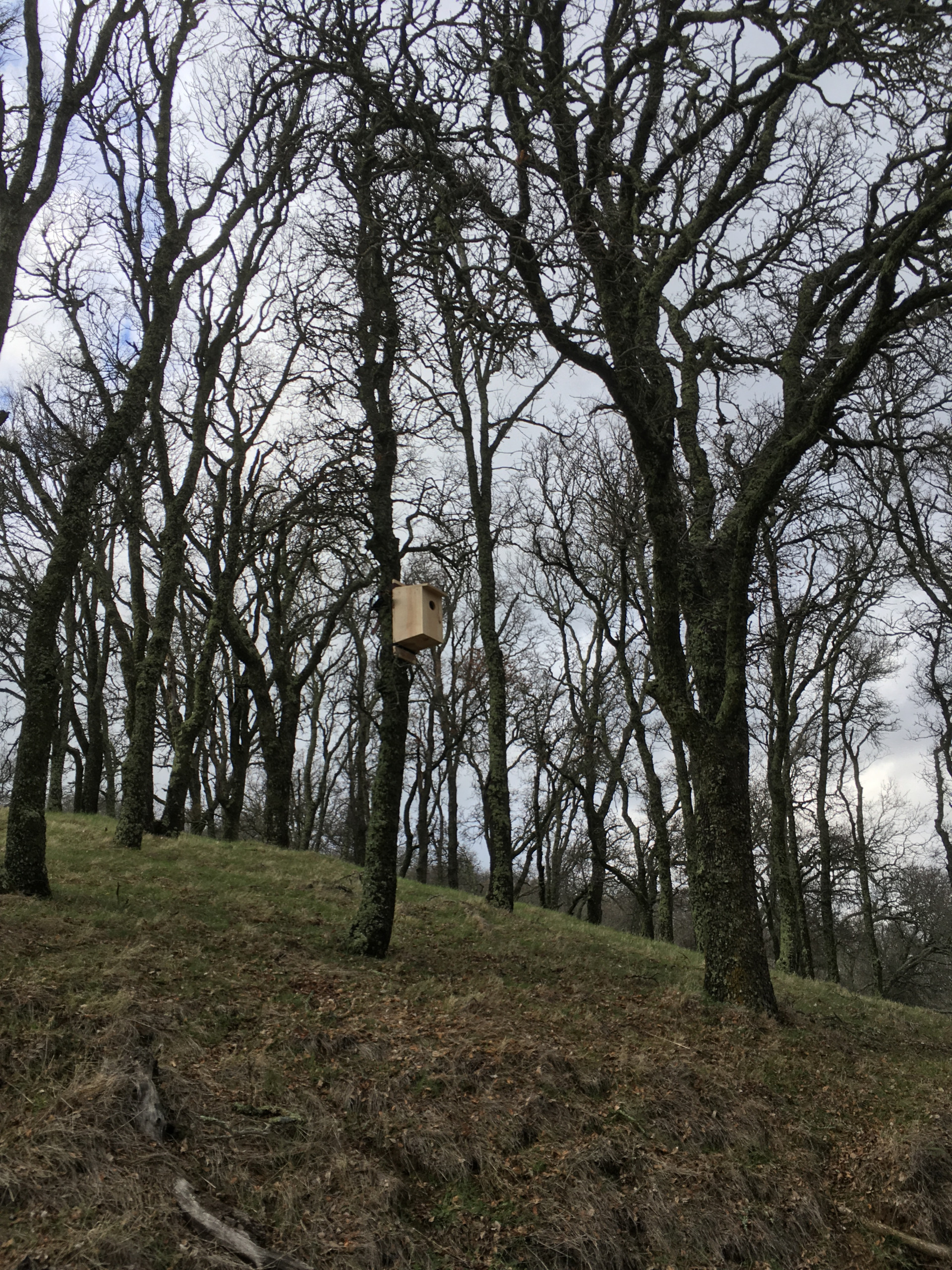 Staff recently installed two kestrel nest boxes at Smith Canyon and in the Curry Canyon Lower 200 area in collaboration with volunteers with The Kestrel Campaign, who have put up additional nest boxes on private and public lands in and around the state park.

American kestrels (Falco sparverius) are secondary cavity nesters, meaning that they nest in tree hollows, nest boxes, or hollows in other structures.

These two-foot boxes with a three-inch opening have been placed at Mangini Ranch as well. There we’ve also added a wildlife camera in an attempt to capture information such as the fledgling birds’ first flight, the number of fledglings, the rate at which the eyas are being fed, and what the raptors are hunting.

Although it’s important that we offer nesting habitat to American kestrels, whose populations have declined in recent years, these nest boxes have been found to serve as nesting cavities for other birds as well, including western screech owls and starlings. 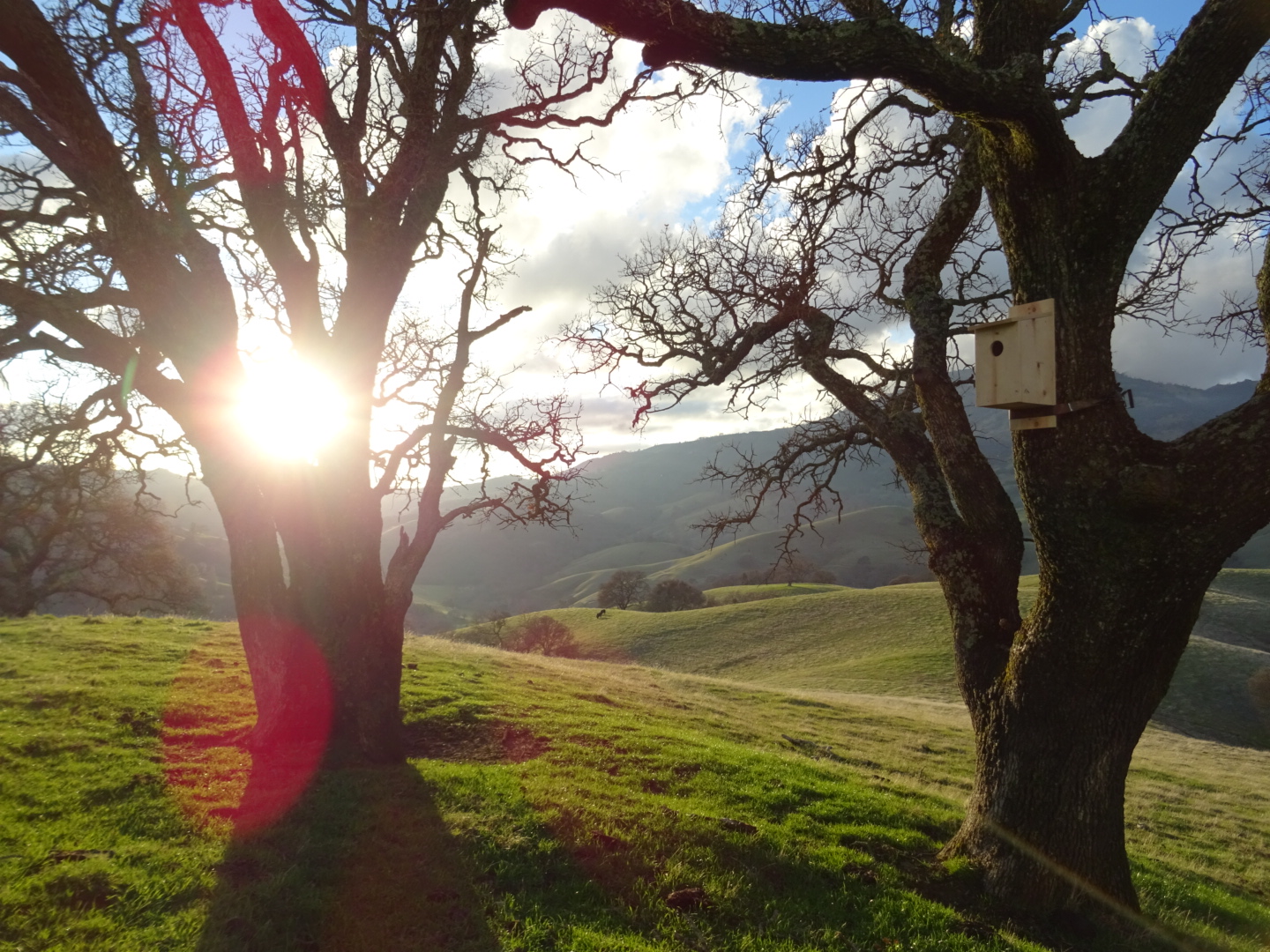 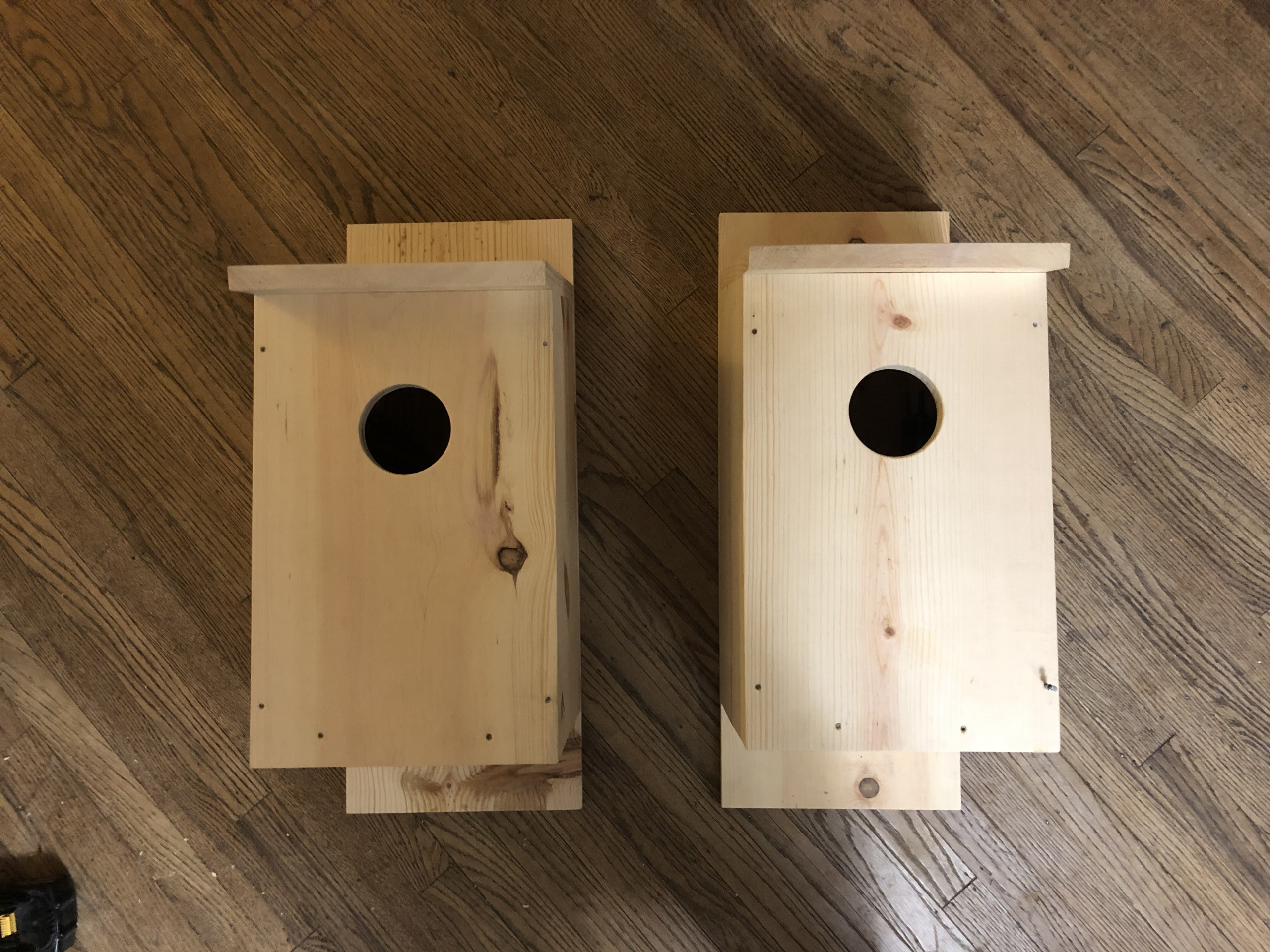 Bench Plans in the Works 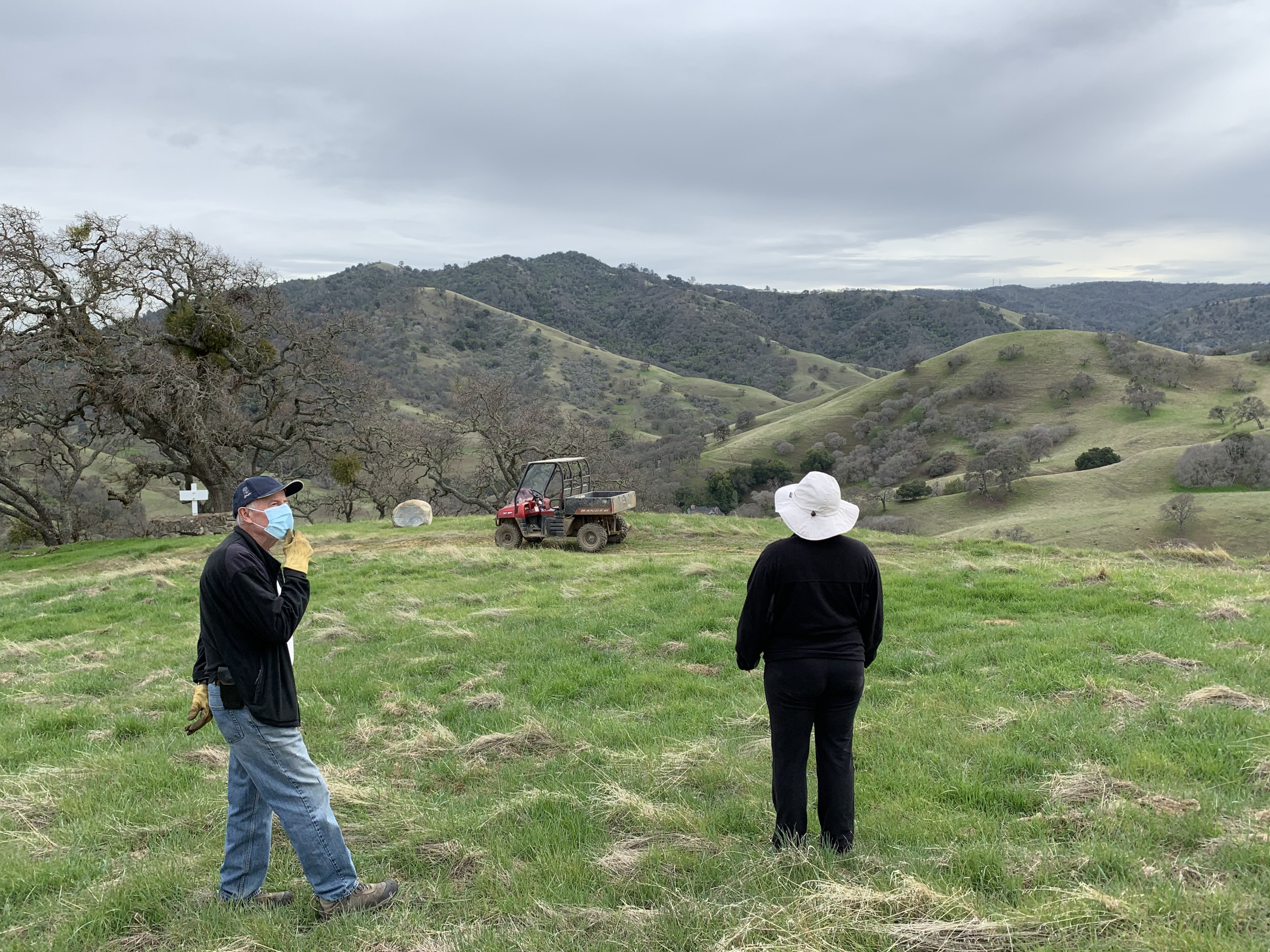 Staff and volunteers scoped out a few bench installment sites at Wright Canyon and in the Curry Canyon Ranch Lower 200. Equipped with radios and the ability to wave across from one hill to the next, they determined a few nice spots where Scouts could install benches for future Eagle Scout projects.