How do we go about the business of saving the mountain? What exactly is it we are saving these days? Our land conservation work is an effective but convoluted mix of land use advocacy, policy and legislation, acquisition, stewardship and education—we depend on strong working relationships with our partners for all of it.

But how do our partnerships with the California State Parks, the East Bay Regional Park District (EBRPD) and the East Contra Costa County Habitat Conservancy (Habitat Conservancy) actually work? As with any set of relationships worth having, it’s complicated.

A few years ago I took a call from a property owner out on Marsh Creek Road who wanted to sell the family land but the family also wanted it to be preserved. Were we interested? Yes.

“A handful of volunteers started with a modest following and a huge goal: to protect Mount Diablo and its foothills.”

Through the process of securing an option to acquire the property that allowed us time to raise the money to buy the ranch, we got to know the Hanson family and learned about the land their family lived on for over 100 years. The Hanson children, now all in their eighties, remember fishing for steelhead in Marsh Creek on SMD’s Big Bend property and camping out on warm nights atop their pyramidal peak with its 755-foot picture perfect views of Mount Diablo. By the spring of 2015 we raised the funds and closed escrow on the property. We then turned our attention to securing it forever by working with our partners at EBRPD and the Habitat Conservancy to transfer Hanson Hills into the regional park system.

Located outside the Urban Limit Line and in the middle of the target area called out for preservation by the Habitat Conservancy, Hanson Hills just became the newest addition to EBRPD’s Deer Valley Regional Preserve last spring. Here is how the deal worked—the bulk of the funds for the purchase from SMD came from the Habitat Conservancy’s grant funds, with the rest provided by EBRPD using Measure WW money. The Habitat Conservancy staff sought the necessary approvals from its Governing Board, as well as from state and federal wildlife agencies. EBRPD moved the project through their Board of Directors in parallel. SMD agreed to sell EBRPD the property for appraised fair market value and used the proceeds of the transaction to invest in other conservation lands.

SMD purchased the property knowing it was within the priority habitat areas for the Habitat Conservancy and the recent expansion work of EBRPD in the Deer Valley area. The sale of Hanson Hills to EBRPD makes a protected north-south habitat corridor (from Roddy Ranch to Marsh Creek) one step closer to completion.
It also replenished SMD’s acquisition funds so that other land could be preserved.

“Save Mount Diablo staff have built relationships in the region with landowners who are interested in seeing their ranches and family lands conserved. SMD staff are also effective working with partner agencies like EBRPD and the Habitat Conservancy to secure funding and to help property owners sell their land and know that it will be conserved. The Hanson Hills acquisition is the most recent property in a long line of successful conservation stories,” said Abby Fateman, Executive Director of the Habitat Conservancy. 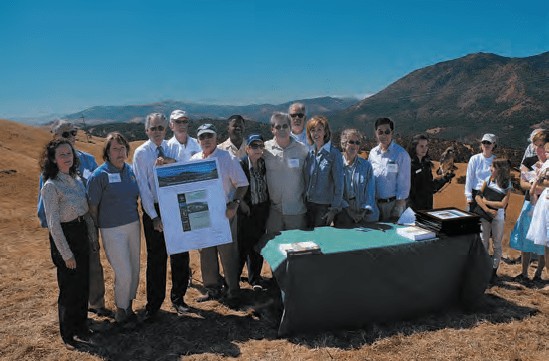 Remarkably, our partnership with the East Bay Regional Park District dates back 45 years because one of our founding board members was Robert Doyle, now the General Manager of the EBRPD. Doyle notes that, “In the last 45 years, there has been an incredible success story here in the East Bay. I was lucky to be a part of Save Mount Diablo’s early creation. A handful of volunteers started with a modest following and a huge goal: to protect Mount Diablo and its foothills.”

He adds, “Today, eight Regional Parks surround Mount Diablo State Park, forming an incredible landscape of protected and connected parklands. This has been a lasting legacy of the many partnerships Save Mount Diablo has worked so hard to make happen. Much has been accomplished working together.”

More recently, the East Contra Costa County Habitat Conservancy was launched in 20 08 (after a 10-year planning effort) and directs mitigation funding, leveraged with conservation funding for acquisit ion, restorat ion and management of up to 30,300 acres of the lands we care about.

The Habitat Conservancy provides streamlined endangered species and wetland permitting for development and infrastructure projects in exchange for collecting fees for those projects. The Conservancy also raises grant funds, allowing for a more holistic approach to mitigation and conservation on the east side of the mountain.

In 1971, there was just one park on Mount Diablo. Working first with partners such as State Parks and Contra Costa County, then with the East Bay Regional Park District, and cities, the Coastal Conservancy, the East Contra Costa County Habitat Conservancy, Contra Costa Water District – we and our allies have pieced together an expanse of Diablo wild lands that is greater than 110,000 acres, an area bigger than Point Reyes National Seashore or the Golden Gate National Recreation Area.

According to Fateman, “Save Mount Diablo was active in the stakeholder process during Plan development. They were at the table with the development community, agriculturalists, and local residents to help shape the Plan’s conservation strategy. As the process moved from planning to implementation, SMD continued its engagement on the Habitat Conservancy’s Public Advisory Committee and is a valuable implementation partner.”

Although regional parks have expanded rapidly, it has been over ten years since land was added to Mount Diablo State Park and while we hope that changes soon, our efforts over that time have been focused on supporting research on the mountain and on funding for the park system, primarily through efforts at the ballot. We worked behind the scenes this summer on a park bond proposal that ultimately never made it to the Governor’s desk but which should be revived by the legislature next year. We have also provided support to the park itself, including partially funding the new volunteer coordinator and renovating the historic beacon on the summit.

“Our long-standing partnership with Save Mount Diablo was born while acquiring important lands for Mount Diablo State Park. These critical landscapes provide necessary space for unique and significant species which are only found in this region.” said Danita Rodriguez, Superintendent of the Bay Area District for California State Parks.
She continued, “Our current relationship goes beyond acquisitions as Save Mount Diablo supports our volunteer program; provides connections with subject matter experts while coordinating and sponsoring occurrences such as the Bioblitz and the Pearl Harbor Survivors remembrance event; and restoration of the beacon with substantial political and community support.”

Our partnerships and thanks are not limited to these three agencies. We are also very active with a number of other non-profits and volunteer groups, including other land conservation organizations, smart growth, affordable housing and transit groups, and we co-founded the Environmental-Labor Coalition of Contra Costa County.

It’s a little bit like diversifying an investment portfolio. We balance our relationships and work to protect habitat on and around Mount Diablo so as not to rely totally on any one approach. Partnering with diverse stakeholders, including our amazing members and donors, helps us tap into the kind of creative, entrepreneurial thinking needed to preserve land in the face of significant development pressures in the Bay Area.

Together with Mount Diablo Interpretive Association and Lindsay Wildlife Experience, SMD will offer the Diablo California Naturalist Program beginning in January of 2017, a program of the University of California Naturalist Program. The certification program is designed to allow citizen scientists to help protect and preserve unique ecosystems with a focus on Mount Diablo. Participants will receive training in a number of fields including ecology, geology, resource management and interpretation to bolster their work as volunteers for the host organizations.
Volunteers are essential to SMD and we are lucky to have hike leaders and property stewards dedicated enough to become certified naturalists, reinforcing our science-based founding.

Preserving a mountain, a landscape, is tough stuff. It requires many people all agreeing over and over again that it is the right thing to do. Our partners help us maintain a strong line of defense, preventing vulnerabilities and bolstering our resolve. They work alongside us to restore habitat to give plants and wildlife the best shot at survival.
And in these ways we take care of the mountain together so it is intact for all to enjoy