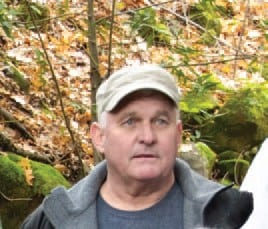 Protecting a national-park sized wilderness around Mount Diablo requires a huge community of folks working together over a long period of time. And yet land conservation is comprised of a series of single, often personal, victories. For one of our local heroes, Brian Kruse, conservation became personal when his family’s ranch was targeted by the county for a landfill. Brian’s family bought Cakebread Ranch in 1898 after losing work as weavers in England and moving to the United States.

The family remains on the ranch today and credit for that goes to Brian. We lost Brian in February of this year but the work he did in his own backyard to protect the land he loved will last forever.

At the celebration of Brian’s life, family and friends sang about his deep roots in the east side of Mount Diablo. Cakebread Ranch, more than 600 acres spreading south along Marsh Creek near Round Valley, is the kind of place where the light becomes magic late in the day and clouds seem within reach from the top of a hill.

Brian knew that the foothills and creeks that make up East Contra Costa are as vulnerable as they are spectacular and he worked in his soft spoken way to keep them safe.

Brian was first involved with Save Mount Diablo in the 1980s when he led the charge to oppose a new garbage landfill at proposed sites that included not only his family’s ranch but also Round Valley. Brian’s grandfather handed him twenty dollars and told him to go stop the dump. It took eight years but by the time he was done, Brian and his compatriots had not only stopped plans for the landfill on his family’s property but also helped a neighbor facing the same fate. Round Valley’s owner, Jim Murphy, was so incensed by the proposal to make his family’s beloved Round Valley a dump that he sold the property to East Bay Regional Park District for a new preserve.

Brian helped to broker the deal between the reclusive Murphy and Park District staff. Distrustful of government, Murphy found himself facing condemnation on one side or a deal with a public agency on the other. Having another property owner involved in establishing the relationship with park district staff opened the door for Murphy to choose to do something that is so hard for every land owner—decide to sell. Brian didn’t hear from Murphy again after he helped out, as was Murphy’s style, but there is no doubt that Brian provided added credibility to the deal and Round Valley remains stunningly beautiful for all to enjoy.

In the late 1980’s Brian kept with the theme and continued to lead opposition to a third landfill site that actually was approved, a canyon that became known as “Marsh Canyon” between Cakebread Ranch and Round Valley. By this point Brian was a seasoned defender of land targeted to become a dump and he joined forces with SMD to craft a ballot measure to protect the area by extolling the grandeur of the canyon, to the frustration of project proponents. The ballot measure did not pass and “Marsh Canyon landfill” was approved by the Board of Supervisors along with Keller Canyon above Pittsburg. But the public outcry and continuing resistance led to a lawsuit and the Marsh Canyon approval was overturned. “We won,” said SMD’s Seth Adams, “It wouldn’t have happened without Brian’s leadership.”

Brian served as a member of the Save Mount Diablo Board of Directors from 2010-2013 and continued as a member of our Land Committee until the time of his passing in February. He was deeply involved, for example, in our successful defense of Brentwood’s Urban Limit Line in 2010, helping to defeat Measure F. He aided and cheered on each new acquisition until the 70 mile ring of open space connecting Round Valley to Black Diamond Mines was complete. Malcolm Sproul, Land Committee Chair, valued Brian because, “He provided the perspective of an east county property owner and helped to keep our land use advocacy connected to the people and places impacted most.”

We thank Brian for his advocacy and will honor his memory by continuing to protect the places he held dear, where he and his family grew deep roots.